Skip to content
The cronut craze has taken LA by way of Santa Monica.  What’s a cronut you might be asking yourself?  Uhh, have you been living under a rock?  I guess there are actually a lot of under rock dwellers.  It’s been described as a “half donut, half croissant pastry hybrid.”  It originated at Dominique Ansel’s bakery in NYC and there have been many knockoffs popping up across the country.

Due to the proprietary nature of the name “cronut,” DK donuts was forced to change its original name DKronuts to O-Nuts.  So lame sounding huh?

The glazed one was not too sweet and just what you would imagine. 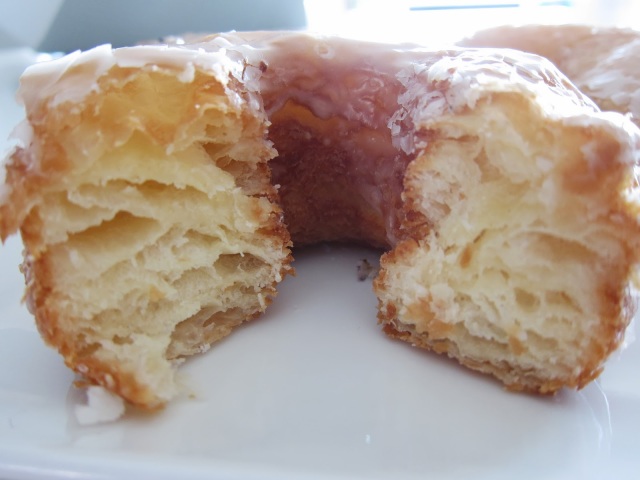 Cinnamon sugar could have been a little sweeter but still good.

Surprisingly, nutella was my favorite and actually the most popular flavor at DK.  It looks like a goopy hot mess, but its better than it looks.  Not super sugary.

Man their other regular donuts are just whatever.  Yum Yum is still the best glazed donut in my heart.

At $5 a pop, these o-nuts are breaking the bank.  They’re good, but I think at their baseline DK donuts does not have a very good croissant dough to work with.  I think they just make them into donut shapes and fry ’em up.  I imagine the original cronut in NYC to be a high quality croissant pastry that gets fried up.  The one here is sorta chewy and not flaky, buttery enough.  Maybe I’m just being hypercritical, but I expected something more mind blowing.  At least I didn’t have to wait in some crazy long ass line for these.  I just had to deal with a bunch of UCLA Asian kids taking pictures with their IPhones and tweeting.  Those Asian foodies are so goddamn annoying huh???