Skip to content
There are certain names in the food world that set off bells in one’s head, James Beard, Julia Child.  Some names are certainly more main stream than others.  Paul Bocuse is probably a bit less mainstream.  He’s no Wolfgang Puck, who has his name on frozen pizza boxes and his mug on iced coffee drinks.  I first heard the name in relation to the international cooking contest, Bocuse d’Or, a competition akin to the Olympics for the culinary world.  But I eventually learned that Paul Bocuse is a famous and legendary French chef with a long list of culinary achievements.  I don’t want to bore you with his resume, but for the purposes of this entry, he is the mastermind behind this 3 star Michelin restaurant in Lyon, France.  Anthony Bourdain called Paul Bocuse “the great chef, a public figure, a hero, an institution.”  Dining with Paul Bocuse at his own restaurant was “the meal of [his] lifetime.”  I, of course, watched that episode of No Reservations, so I was totally excited to be eating here.
There is only one word to describe the food and the restaurant.  Classic and old school.  The food here is prepared and served the same way it has been for decades.  Many chefs, who have gone on to run their own celebrated kitchens, have spent time in Bocuse’s kitchen.  The restaurant is bright, colorful, and bordering on gaudy.  It harks back to an era in time when gold equated to opulence.  Everything just seemed to shine.  You have your choice of menus: grand traditional (6 courses, 250€), bourgeois (5 courses, 210€), traditional (4 courses, 160€).  Keep in mind these are not tasting menus, but rather multi course dinners.  The portions are quite large and we were all overwhelming stuffed at the end.
Potato Leek Soup
Celery Cream with Shrimp
Roquefort with Apple Gelee
The amuse bouche trio was a delightful little start to the evening.  It always seems you can never go wrong with a small bite of anything.

Lobster Bisque
Very likely the best lobster bisque I have tasted.  Seriously the French make everything taste magical when cream is added to anything. 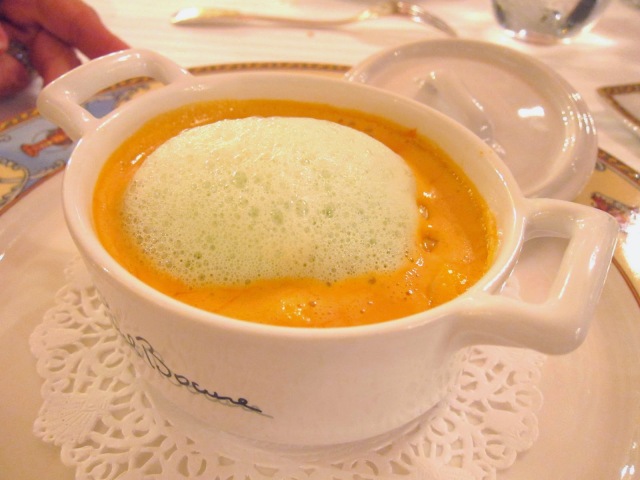 I prefer my foie cold rather than a pan cooked preparation.  While I’ve had tastier seared foie, the foie in France always tastes the cleanest.  It’s interesting how foie always pairs well sweetness.  The sauce might have been too sweet after eating a whole plate of it. 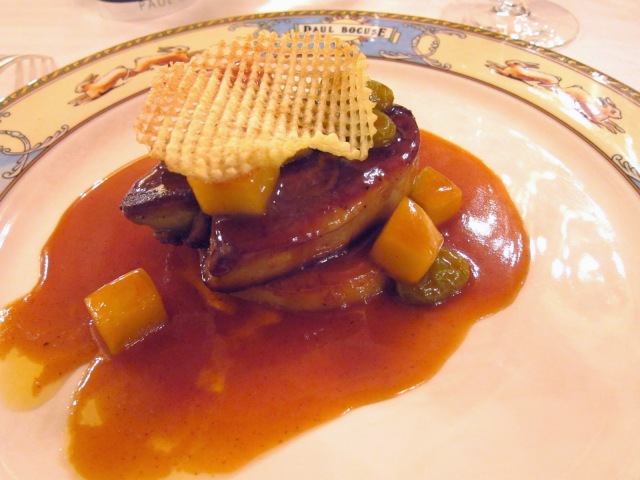 Pan Cooked Scallops beurre blanc, potatoes soufflées
A salty scallop is a cardinal sin.  I was shocked and very disappointed that a place of this caliber could commit such a juvenile error.  A lot of explanation (in French) went into describing the “potatoes soufflées.”  From I gather, it seems like just a simple fried potato, but the ability to fry a potato to puff it up like that takes quite a bit of skill.

I didn’t taste this, but what a beautiful preparation.

Puff Pastry olives
Not sure how this fit in with the mullet.

Icy with strong alcoholic and sweet fruity notes from the beaujolais.  It was probably a tad too sugary.

Anthony Bourdain had a more detailed description.  The whole fish was stuffed with a lobster mousse, chervil, taragon and then wrapped in a flaky puff pastry.  A tomato bernaise sauce was served tableside, AS. IT. ALWAYS IS.

Puff pastry is also another thing the French hit out of the park.  I’m beginning to learn that everything that the French invented, they do the best.  Kinda like duh, right?  So frickin’ flakey and buttery.  On the flipside, it became pretty overwhelming to eat more than a couple of bites of this.  This wasn’t even my dish, so I dunno how Mama H.o.P. and Parisian Friend were able to eat all of this.  Wait, nevermind.  Parisian Friend’s nephew ended up cleaning house and finished this for them. Nephew can eat a lot.

The French love tableside presentation and saucing.  This was no exception, as the veal chop was carved off the bone right in front of us.  I was pretty disappointed that it was cooked medium.  This might have been how they intended it because another table had their veal cooked the same way.  Overcooked meat is another cardinal sin, but maybe old school French is different?  The meal was so heavy by this point, that the roasted vegetables were a welcome treat.  The kidney was frankly unappetizing.  It had an awful organy taste and Mama H.o.P. kept complaining how it was improperly prepared.  Again, maybe this is just how the French like it.  It wouldn’t be the first time they like things super stinky.

Delicacies & Temptations
Fantasies & Chocolates
The desserts are a dizzying array of classics: creme brulees, cream puffs, pistachio cakes, baba rum cakes, meringue thangs, seasonal fruits, etc.  I didn’t really even eat most of these desserts because I was so damn full. 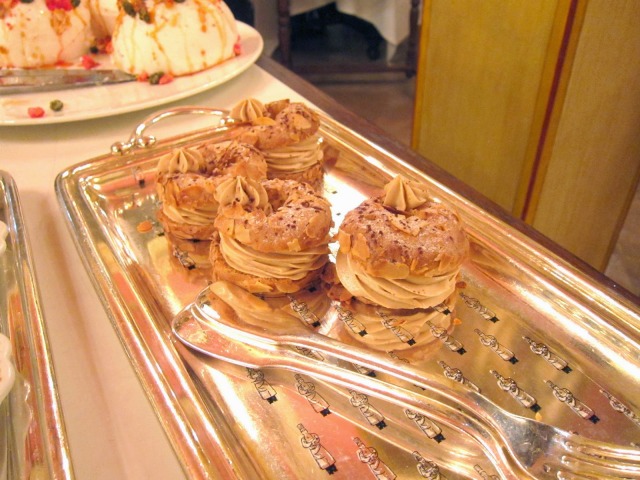 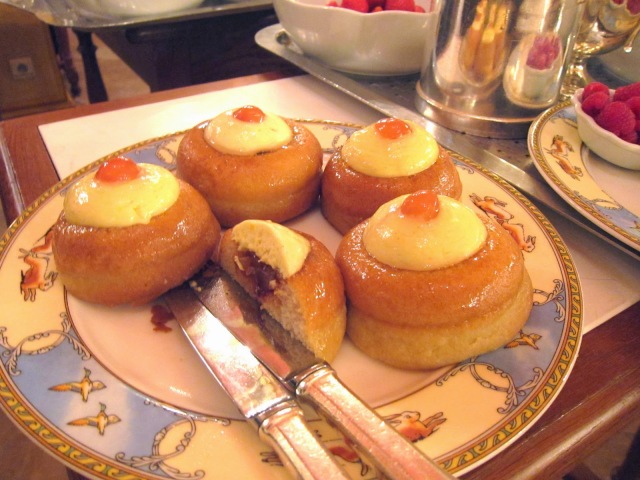 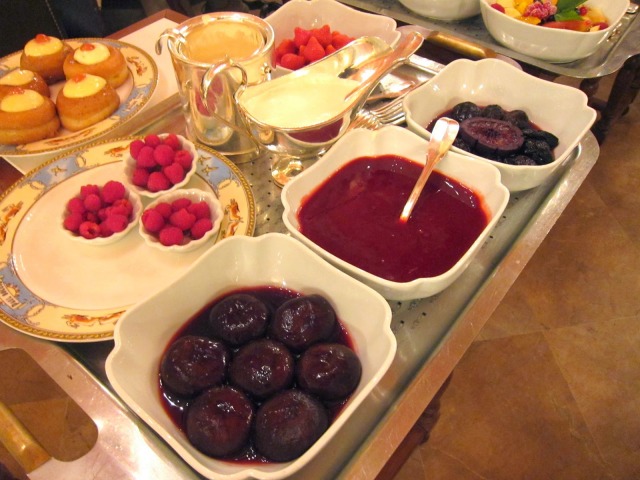 I knew nothing about the cheeses and basically picked them at random.  I didn’t even really want to eat the cheese, but I am constantly trying to expand my culinary horizons and try things I don’t like.  I’ve been lucky in the past to find good versions of things I used to not like and actually come to love it.  Uni is a prime example of this for me.  Unfortunately, the cheeses were too strong and stinky for my liking.

Oddly this was actually served BEFORE the desserts, which we all thought was pretty odd. 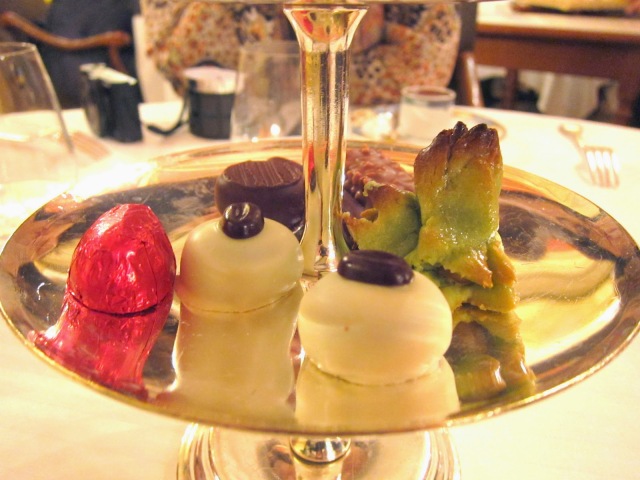 Everyone felt the chocolate was too heavy and out of place to precede the dessert parade.  I love a good chocolate pot de creme so I didn’t complain. 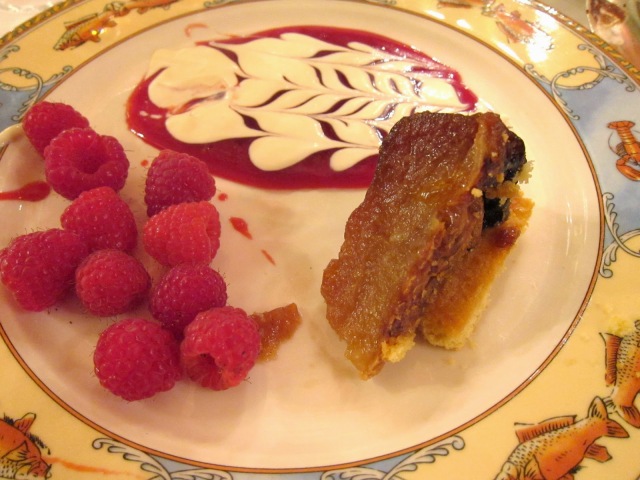 Our dinner was not without a show!  Frankly, I felt I was watching a monkey in a suit play some outdated silly jig.  It would have been complete if the monkey danced too. 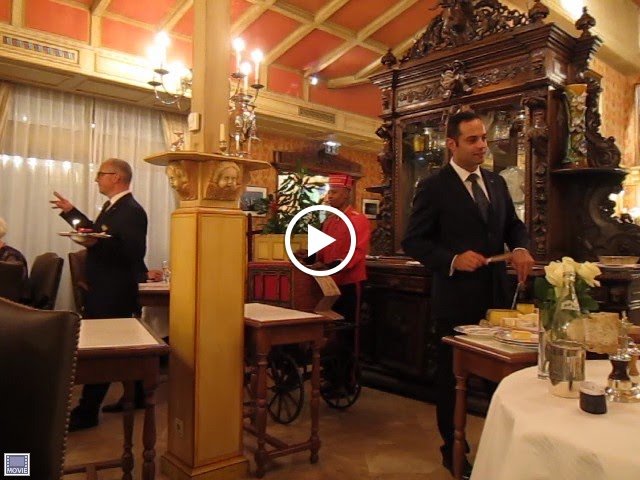 On the one hand, classic is timeless.  On the other hand, classic can be boring.  I think you could really enjoy and appreciate the food here if you come in with the right perspective.  I think I was expecting to be wowed, the way Alinea and Eleven Madison Park have wowed me.  That is, with a firm foundation in the classic, with heavy influences from contemporary and modern techniques, and creativity that pushes all limits outside the proverbial box.  That is totally NOT what Paul Bocuse’s flagship restaurant is about.  This place churns out the same things that brought the restaurant fame 50 years ago.  It’s about recreating a style of food from an era that predates cameras, blogs, and Yelp.  So while I left the restaurant underwhelmed and disappointed, looking back I think I can judge the food a little less harshly on a conceptual level.  The food and flavors were spot on Frenchy French French.  There are things here that you’re just not going to get anywhere else, namely that sea bass.  But if you could, its probably because it was invented by Bocuse himself.  The dude is in his 80s now!  I am gonna rake this place over the coals for the salty scallop, overdone veal chop, and horrible service.  I normally don’t care too much about service, but we just felt ignored and disregarded at times.  At a 3 star Michelin, if you don’t feel suffocated from their dotting then they are doing something wrong.  I am happy I got to experience the food of such a legend.  I can’t say I would ever come back though. 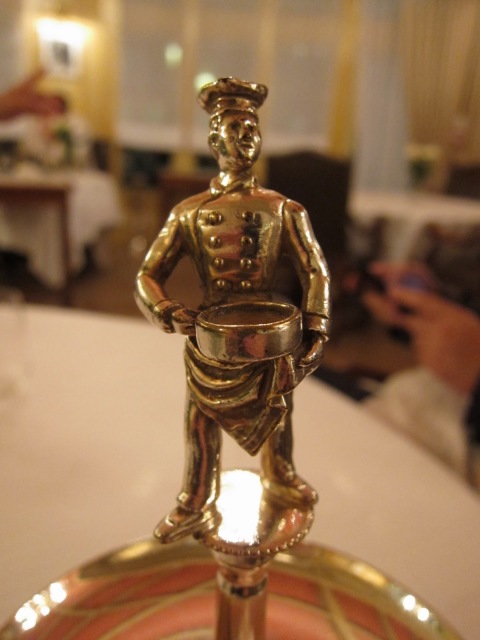