Triple F has raved about Zushi Puzzle for years now.  She loved the place so much, she became a regular.  We were seated at the bar and chef/owner Roger was getting chummy with Triple F, like they’re just the best of old friends.  I exaggerate, but it’s safe to say Triple F is no stranger here.  In any case, this is always a nice way to start the meal.  It gives you the feeling you’re special and in for something equally special.

Ikura marinated in sake and mirin
The sake was fairly strong here, but it was offset by the sweetness of mirin and salty brine of ikura.  Not my favorite preparation of ikura, but not bad. 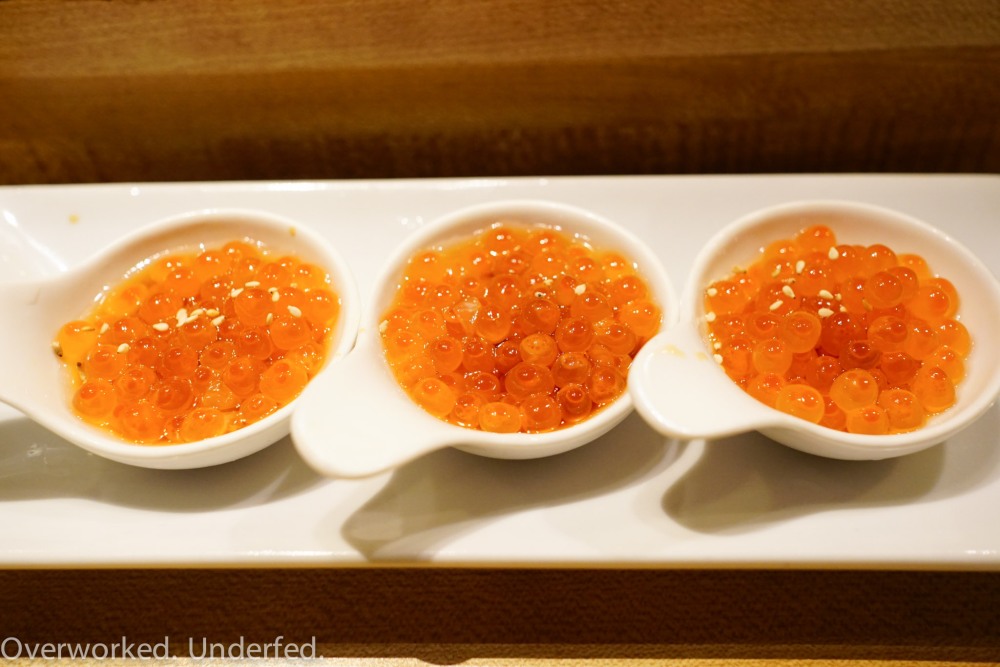 Uni with tofu
It was hard to go wrong with so much delicious, creamy, sweet uni on top of some silken tofu.  YUMS!

Soft Shell Crab & Spicy Tuna Hand Roll
The combination of spicy tuna and soft shell crab, predictably made Triple F’s eyes bug out and her appetite sing.  It was tasty for sure.  The crab was crunchy and meaty.  The spicy tuna had just a little bit of kick.  I didn’t like the kelp in place of traditional nori. 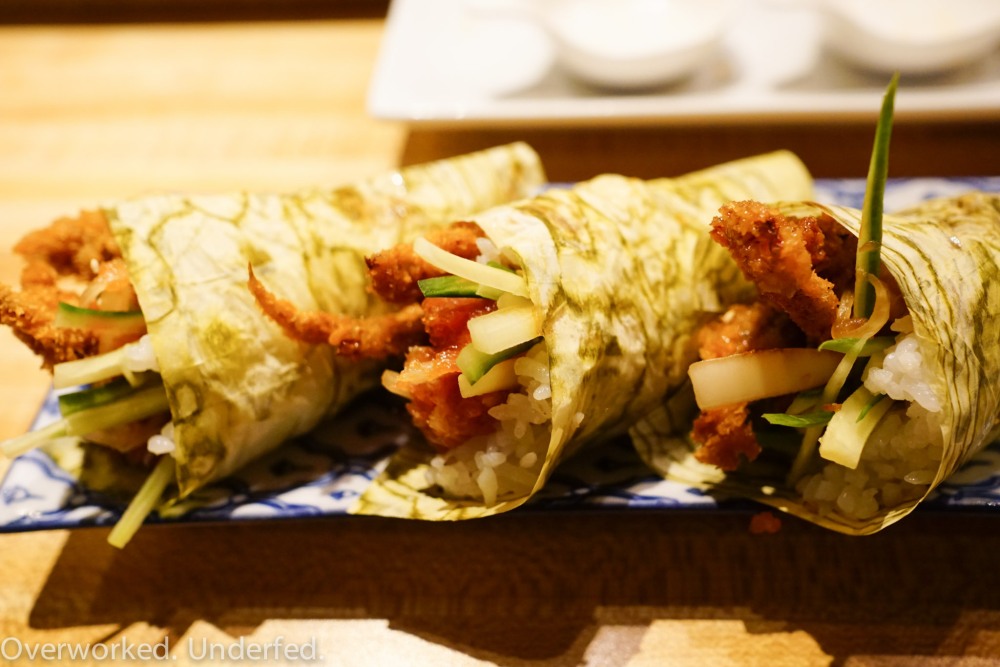 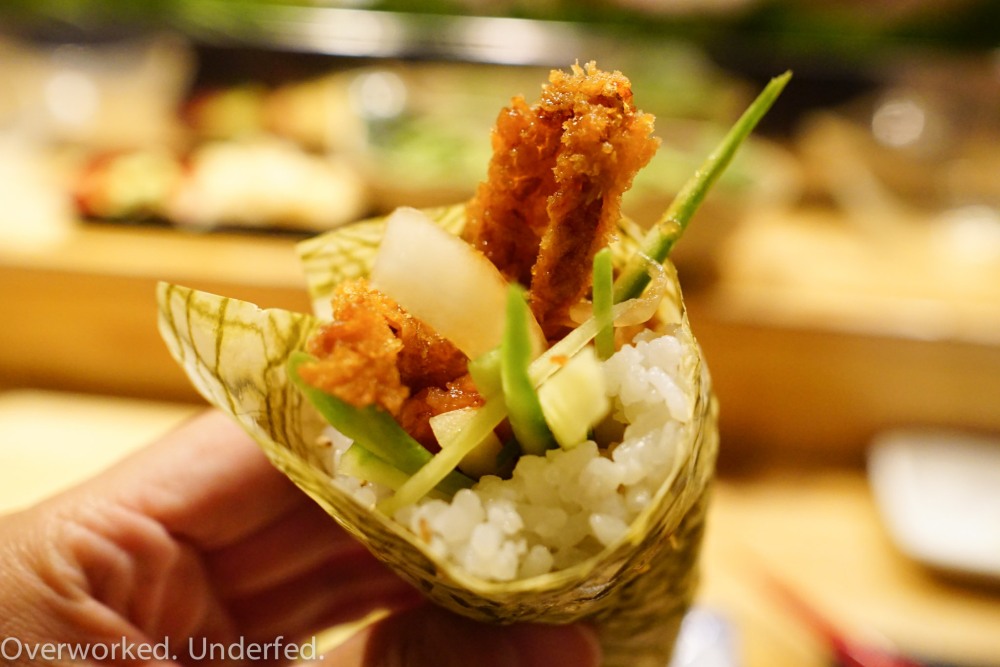 Halibut truffle oil, habanero sauce
The start of some more innovative ways to do raw fish.  Truffle oil just about makes everything better.  The habanero sauce added some kick. 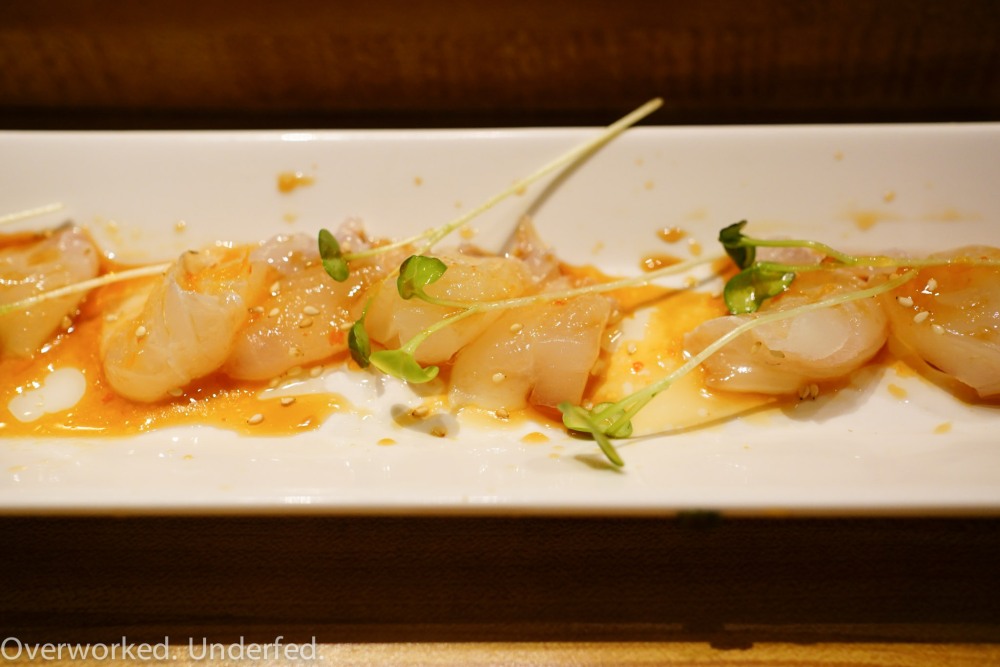 Scallop Sushi
I guess you’re supposed to eat the lemon slice with the scallop nigiri but we skipped it and still found it pretty delicious.  I would have preferred a one scallop to one nigiri ratio instead of slicing up the scallop to make many more smaller nigiri.

Fried Scallop Muscle
The accompanying fried scallop muscle was something new for me.  It was reminded me of fried calamari, but with a different kind of chewy seafood.  Interspersed between the fried scallop muscle were battered and fried sweet onions.  Dipped in some sweet soy sauce, the dish was another delight. 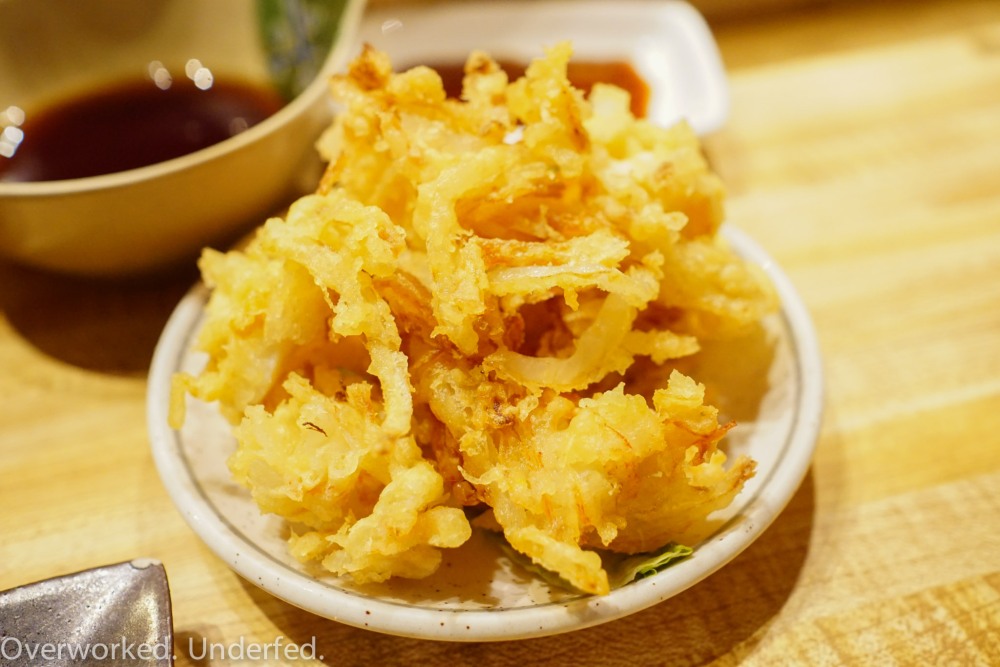 Torched Kingfish Carpaccio and Calamari Salad
The Kingfish was delightful, but I wasn’t too keen on the calamari.  The whole mix of things was lacking harmony.  The sauce was too sweet.  Raw white onions? Wood ear mushrooms?  The calamari or something here was sorta off or fishy.  I started to understand that Roger is totally self trained.  Being Chinese, I can see that maybe he was shunned by the Japanese sushi chefs.  He alludes to them not being inclusive or happy to share their knowledge.  It was quite apparent, he liked to do things his own way, which for Triple F is pure genius.  I was still formulating my own opinion as the dinner progressed. 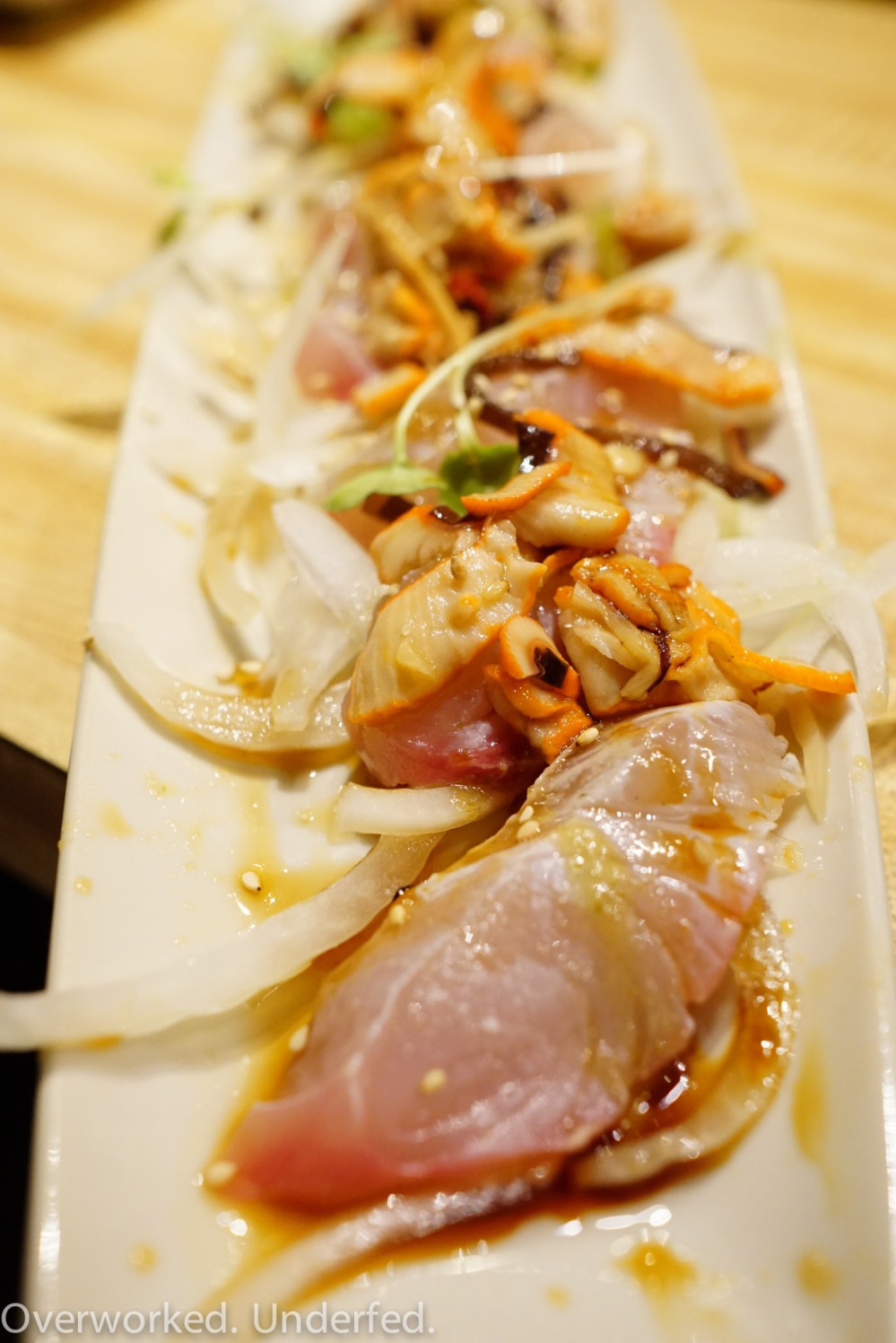 Aji
Triple F assured me some more traditional nigiri, sans sauce X or sauce Y was coming my way.  As my sushi palate has progressed, I’ve come to appreciate traditional sushi without the frills of fusion and sauces.  The aji was fresh without a whiff of that unfortunate mackerel-y fishiness.

Sashimi shima aji, copperhead king salmon, spanish mackerel, kanpachi, sea trout, trumpet fish butterfish
The sashima offering was wonderful.  Roger has some really great fresh fish.  He was literally tearing it out of plastic vacuum sealed bags or unwrapping it from plastic bags right in front of us.  The butterfish and trumpet fish were definitely rare treats.  The Annoyer was very pleased.

Copperhead King Salmon Sushi
I was beginning to notice that Roger’s technique is kinda sloppy.  Sitting at a sushi bar, I usual marvel at the chef’s keen attention to detail, precision, and cleanliness.  Roger’s cuts are uneven, his rice is mostly misshapen, and his station could use some organization.  While the salmon was quite nice, it was sauced in something a little tangy sweet, which found its way on most of the nigiri that night. 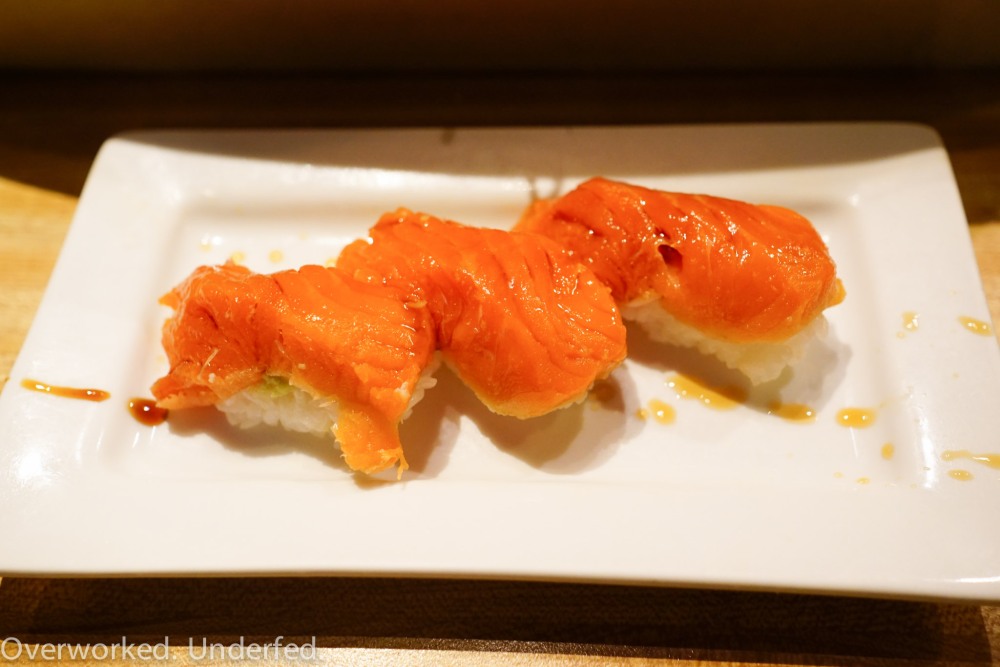 Halibut Toro (angawa)
A unique cut of halibut I had never had, but thoroughly enjoyed. 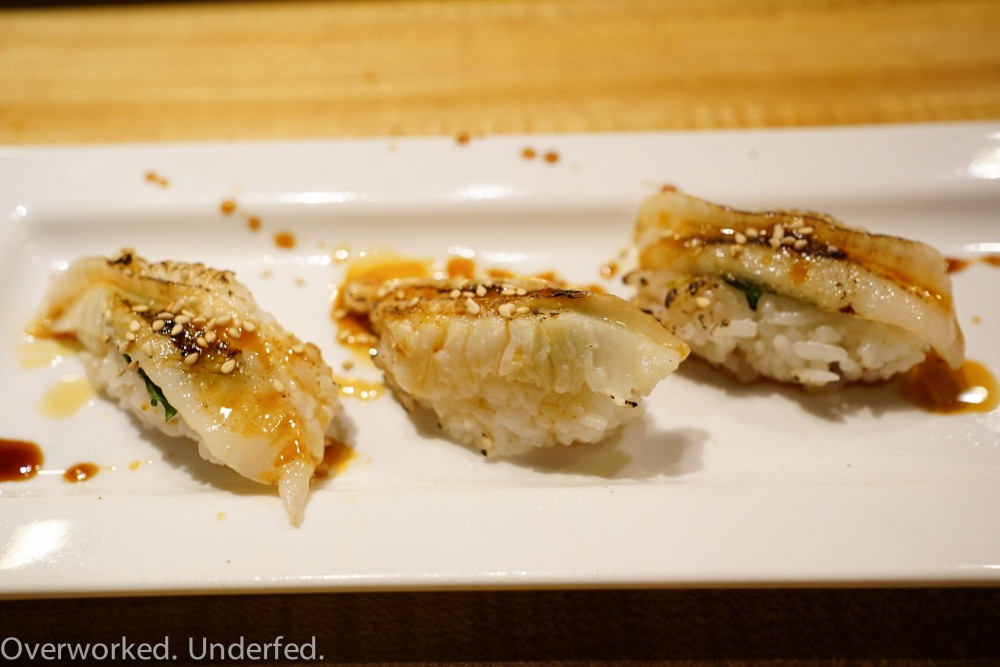 Kobe Sushi melted kobe fat, shaved foie gras
I was really so full at this point, but Triple F and The Annoyer still had steam.  I told Roger that they could go on without me, but he enticed me to have just one more piece.  Triple F said I would not be disappointed.  This over-the-top piece of sushi was so decadent.  I can’t say the shaved foie was all that noticeable, but the lightly seared kobe was as promised.

I am glad I finally got to experience the Zushi Puzzle that Triple F has been yammering on and on about all these years.  Roger is extremely welcoming and friendly.  He really warms up to you and tries to craft a whole experience through his jovial personality and interesting taking on sushi.  It’s safe to say he is not serving up a traditional sushi experience.  He is not Japanese and he was not trained through that lens (I assume), so it is totally reflected in the food.  While things looked sloppy, the sushi tasted fine.  He succeeds on the freshness and variety of fish, but I have to ding him for the excess use of sauces.  That’s just not my thing, but it really is his thing.  Loyal patrons like Triple F really  love his style.  It’s a nice place to try when you’re in SF, but I’m not in any hurry to return.