When visitors come to LA, sometimes I roll my eyes at the list of places they plan to dine at.  Pink’s Hot Dog, Langer’s, The Original Pantry, The Stinking Rose, and the list goes on and on.  There’s something to be said about knowing a city because you lived there, and knowing a city because you read about it in a travel guide.  I wonder if my San Francisco dining choices are just misguided tourist traps.  For instance, Tartine Bakery is a highly lauded bakery, most famous for their sweet sticky morning bun, but certainly well regarded for practically everything else they churn out including fresh bread, croissants, pastries of all sorts, cakes, and you-name-it.  It’s basically the “it” bakery of San Francisco.  Even though it’s been around for years, the hype still persists as patrons, locals and out-of-towners alike, still queue up outside the bakery on the weekend mornings.  That line is the precise reason I avoided this place for so long, and that only the early risers can get their hands on the famed morning buns.  Mornings are not my friend.

This is just the line at 10am on a Saturday morning.

After close to 45 minutes in line, we finally got in the door to wait another 15 minutes to order, pay, and finally eat.  Charming and quaint, or communal and cramped?  I’ll let you choose.

I must say their selection of treats is an undeniable seductive treat to the eyes.  The cakes are a marvel. 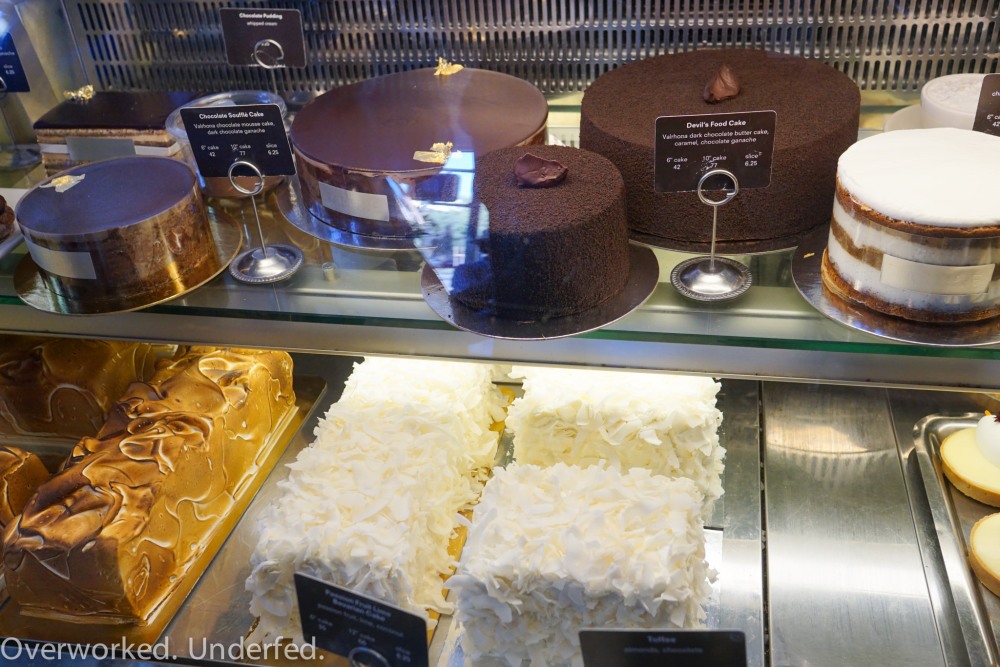 The tarts and pies are exquisite. 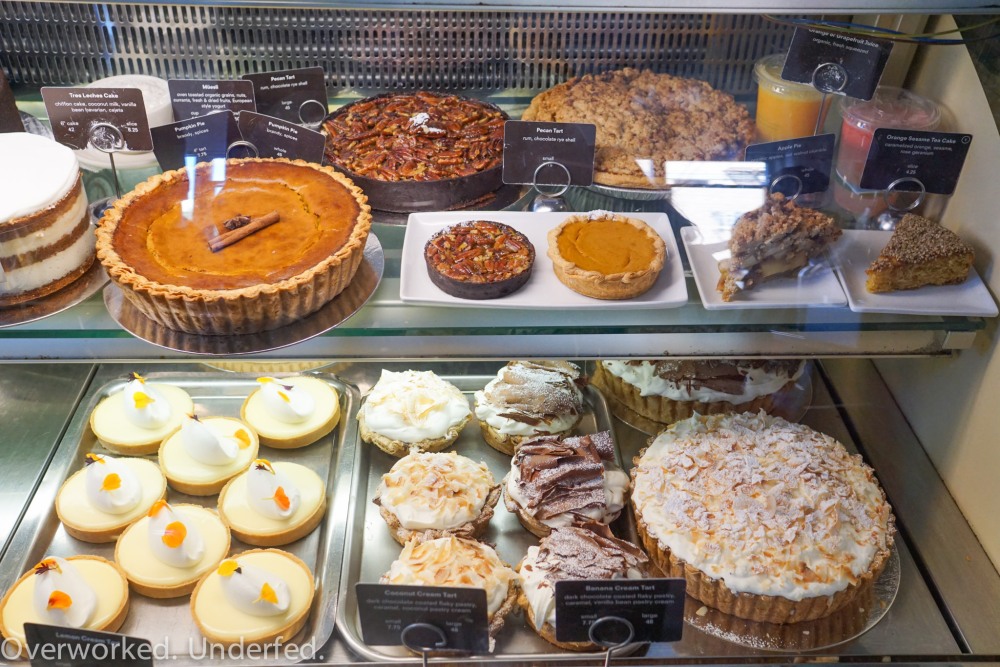 Lucky for us, the morning buns were plentiful in piles. 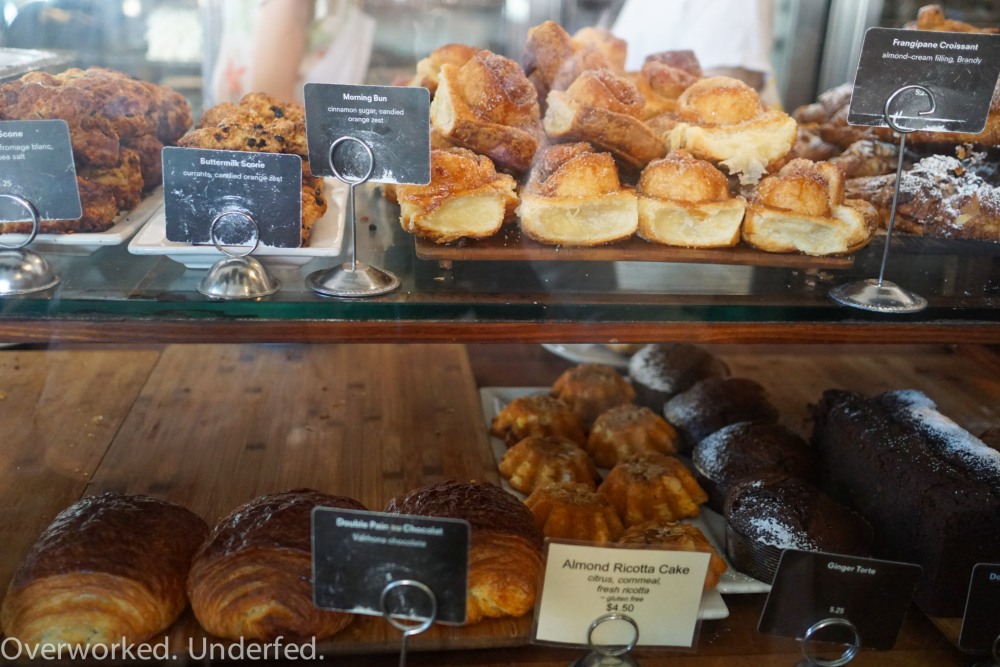 Bread Pudding
We pretty much hit up most of the popular, talked about items, including their brioche bread pudding.  Being fall, it was topped with spiced apples, pears, and grapes.  It was piping hot from the oven.  Frankly, it SUCKED.  Bread pudding is basically bread, be it brioche, croissants, sliced white bread, soaked in a sweet eggy custard till fully soaked and absorbed and then baked into a cohesive mass.  I’ve made bread pudding before, and the mistake I made was not waiting long enough for the bread to soak up all the liquid.  The result is wet bread plus flan.  This is exactly what we were served, but I think this is what they are going for.  This is not how I like my bread pudding.  FAIL.

Triple F has been to Tartine and recommended a few things. 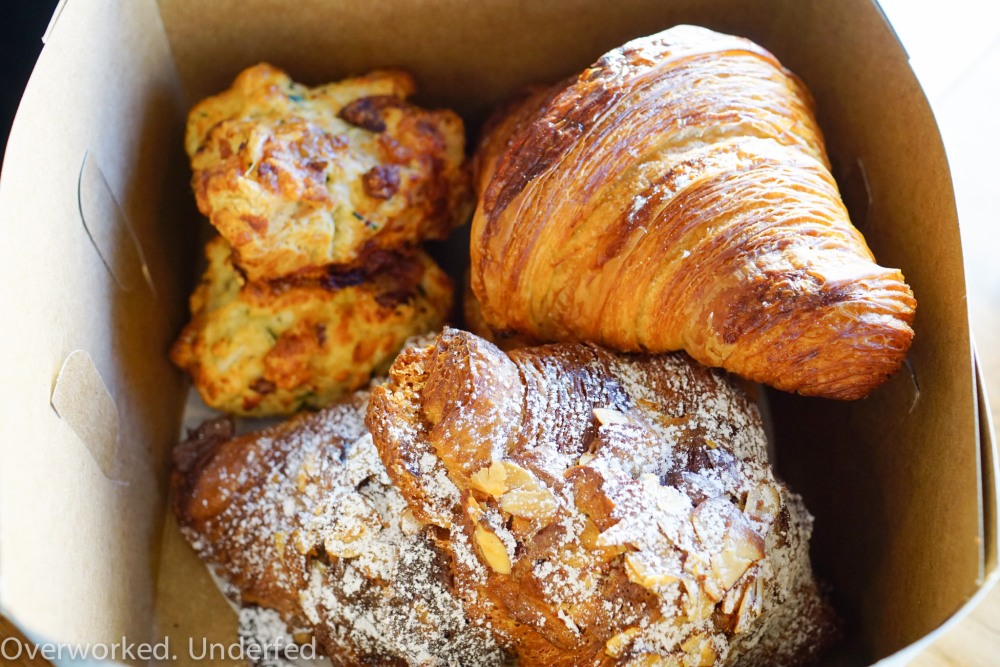 A long time ago, after discovering how croissants are made, I began avoiding the fat laden pastry.  It’s not that I didn’t like croissants, I just didn’t love them enough to commit to the calories.  For others, like Care Bear, the multitude of buttery flakey layers is like a siren call.  It wasn’t until I had the best croissant in Japan, and then started hearing about these bakeries in San Francisco with awesome croissants, that I started to feel the need to find America’s best croissant.  The croissant at Tartin was kind of dry and not anything like the wonderfully moist and flakey croissant I had at Gontran Cherrier in Tokyo.  The savory scone came strongly recommended by Triple F, but Red Lobster’s cheddar bay biscuits were moister than this thing.  Flavor wise it was good, but could have been moister.

Morning Bun cinnamon sugar, candied orange
This is Tartin’s signature item.  Triple F wasn’t too impressed, so that set my expectations pretty low.  It’s safe to say that low bar probably aided in my favorable assessment.  While it looks like a cinnamon roll, it is actually a flaky pastry dough rolled in a cinnamon sugar and a sticky sweet candied orange glaze.  It’s actually really good, and the best thing I had at Tartin.  Would I line up for an hour for this thing?  Probably not, but I can definitely say its a special item worth a try.

Frangipane Croissant almond cream
Triple F preferred the almond croissant over the plain one.  While there was certainly more going on here to like, I still found the croissant itself underwhelming.  It probably does not help I kind of dislike most things with almond extract.

Banana Cream Tart chocolate and caramel coated pastry
The Annoyer had to give this a try, as anything banana is totally up his ally.  It wasn’t too sweet, and I enjoyed the balance of banana with chocolate, caramel, whipped cream, and a flakey crust.  I must admit the crust could have been more moist.  It suffered from the same problem as the croissants.

It sounds like I’m being pretty harsh with my review of Tartine.  I certainly wouldn’t put Tartine in the same class as Pink’s Hotdog and The Stinking Rose.  It’s a nice little bakery, but it’s just a tad overrated and not worth the wait.   I do give it props for the great depth and breadth of baked delights they churn out from scratch daily.  Before trying their goods, I was really excited to buy the Tartine cookbook.  After trying their goods, my money is probably better on a different pastry cookbook.  I am glad I was able to try the morning bun and finally cross Tartine off my SF bucketlist.