The last time the Michelin guide published a Las Vegas edition was 2009. At that time, only 1 restaurant, Joel Robuchon, earned 3 Michelin stars.  Only 3 restaurants, including Guy Savoy (pronounced “Ghee Savwa”), earned 2 Michelin stars.  The 7 year old rating may not be relevant anymore.  It’s not even listed as an accolade on its own website.  The flagship restaurant in Paris still holds a current 3 star rating.  Regardless of awards, Guy Savoy is still regarded as one of Las Vegas’ top restaurants.  I was excited to see if it could top my experience at Joel Robuchon.  Soprano Man, an expert in Las Vegas dining, seemed to think it would.  We did not have time for the 14 course Innovation-Inspiration menu ($375pp), so opted for the 9 course Signature menu ($290pp) which included many of Guy Savoy’s signature creations. 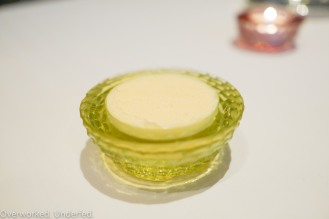 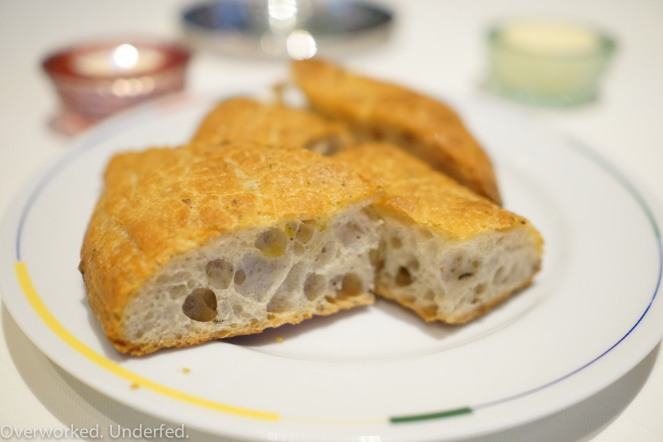 cauliflower soup, crispy quinoa, espelette pepper
The soup was cool and smooth.  The crispy quinoa was a wonderful textural contrast.  The pepper added beautiful color but I can’t say I noticed it much. 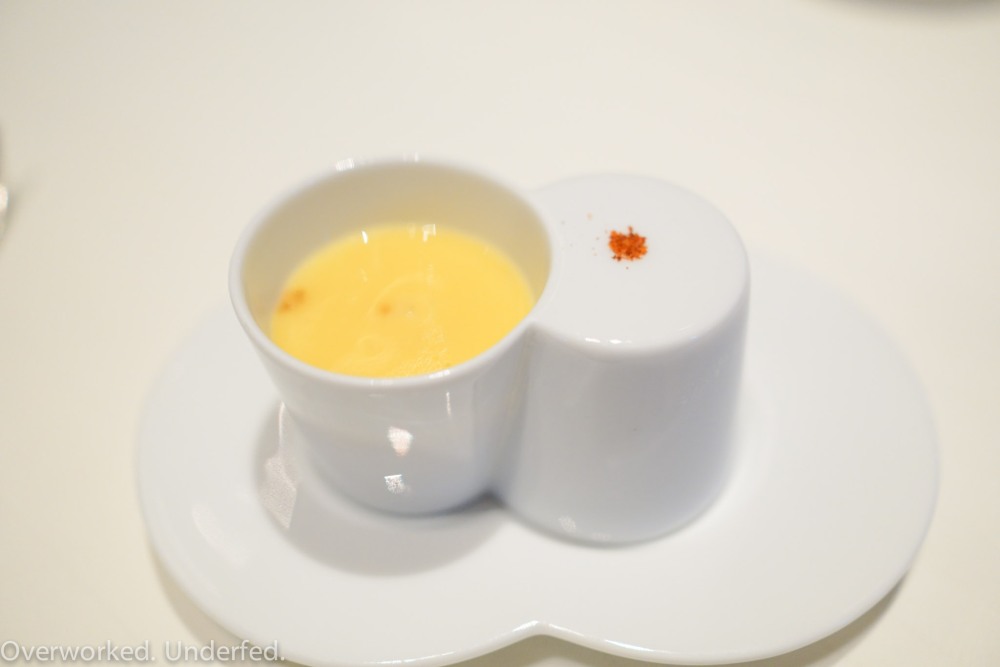 salmon tartare
A delicate little bite was hiding underneath the cauliflower soup. 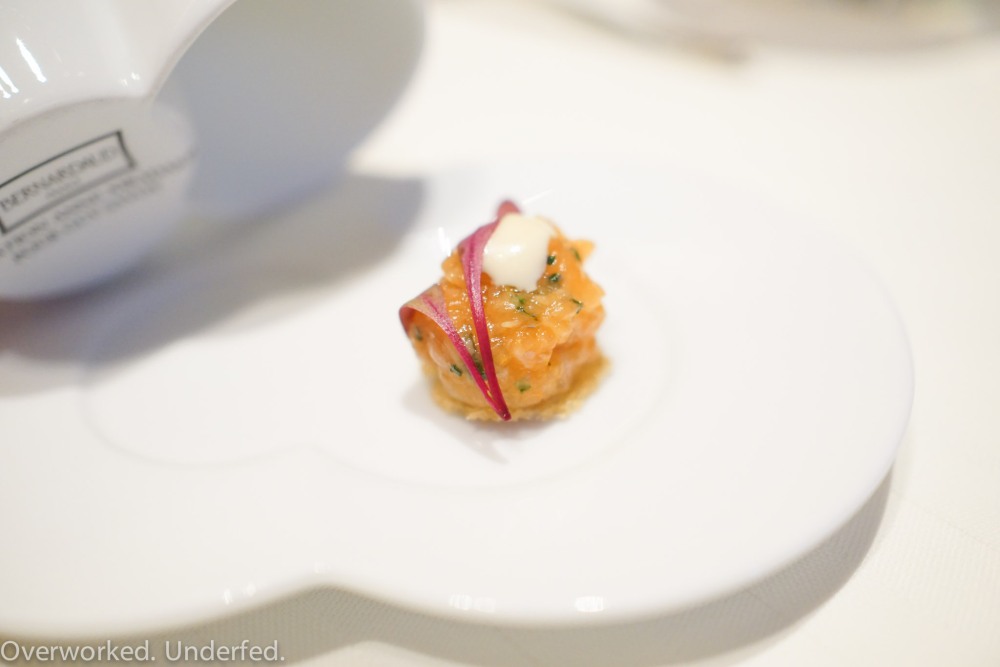 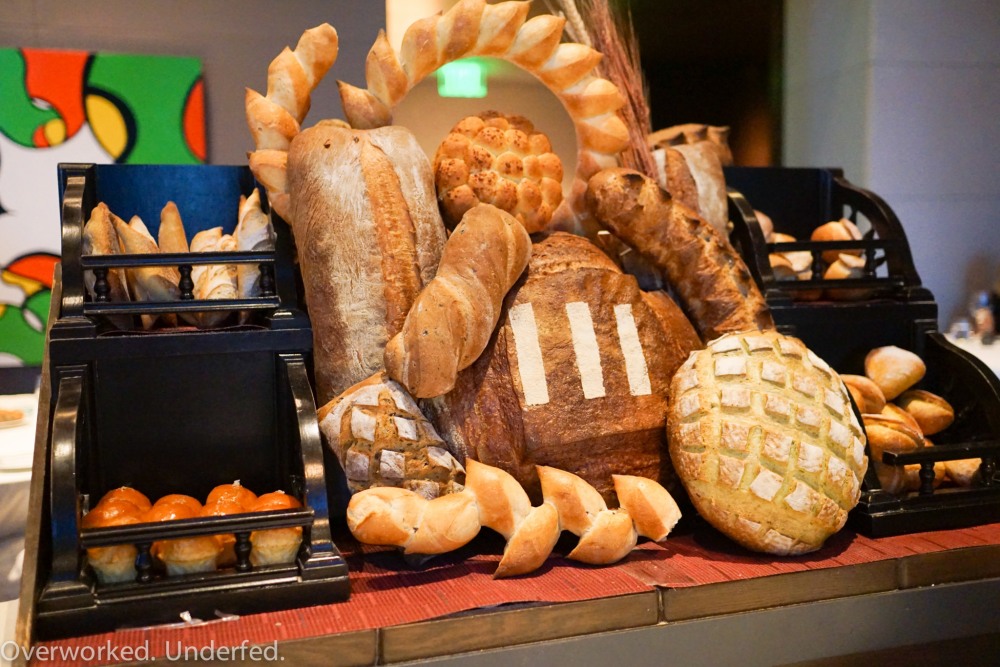 bacon milk bread
parmesan milk bread
seaweed ciabatta
The milk bread, with it’s soft and chewy pillowy insides, were the easy favorite for me.  I never had seaweed flavored bread, which they successfully highlighted here.

The Annoyer did not limit his selection and asked for a small piece of every bread on the cart.  This was left in the wake of his destruction. 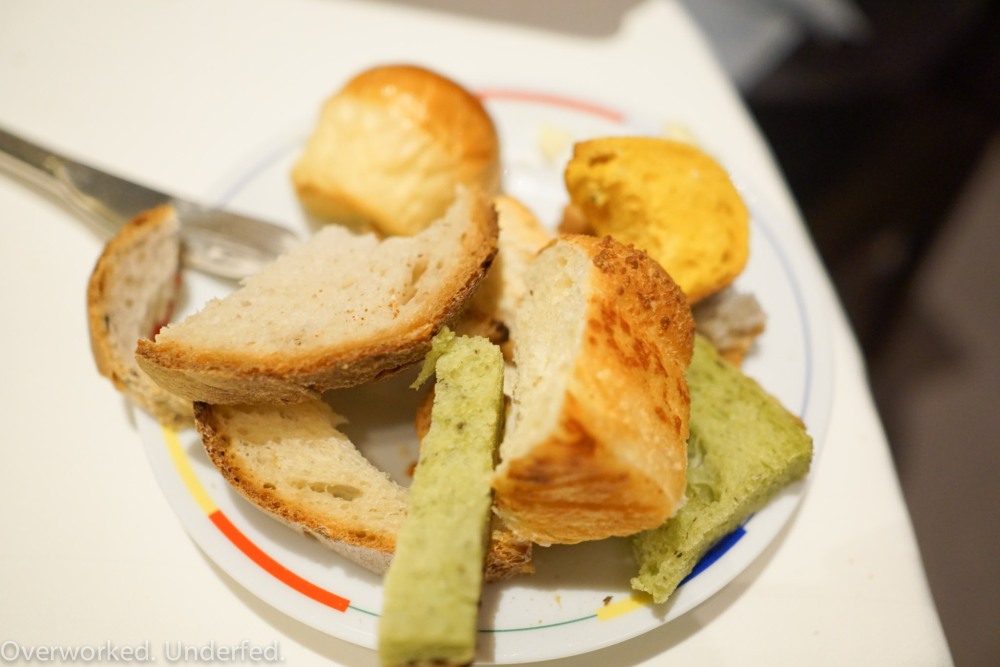 “Colors of Caviar” caviar vinaigrette, creme fraiche of caviar,  green bean puree, golden osetra caviar, caviar sabayon
Stunning to behold, and fun to eat.  With the pearl paddle like spoon, we were instructed to scoop a bit of every layer for each bite.  The caviar was meant to be the star of the show, but I can’t say the typical brine of caviar was very strong here.  Everything was subtle from the acid of the vinaigrette to the richness of the creme fraiche and sabayon.  The texture of the green bean puree was distractingly thick and pasty.  It was a nice start, but not particularly mind blowing. 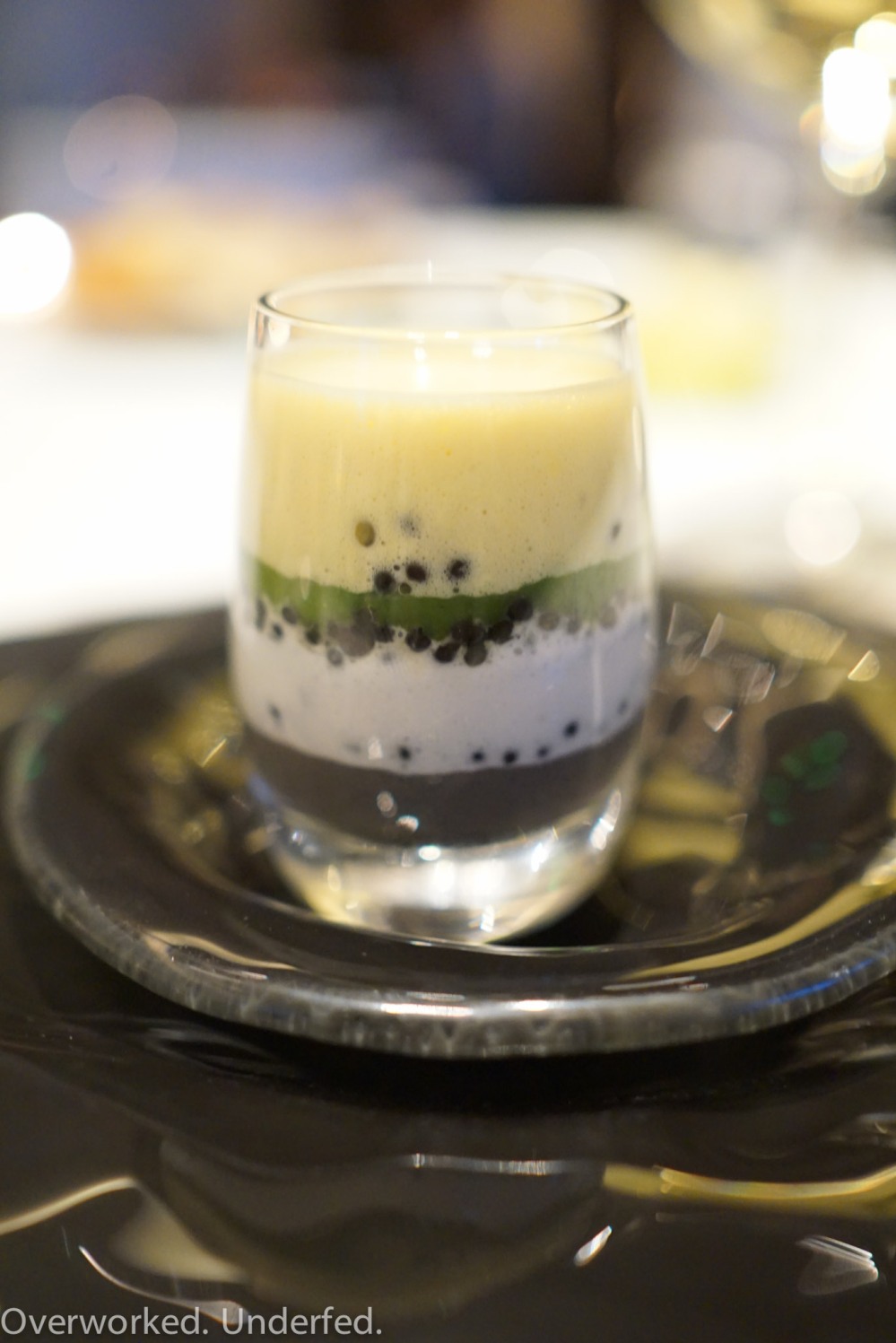 Peas “All Around” pea gelee, pea puree, pea sprouts, english peas, poached egg, chive oil, toasted country bread
I enjoy dishes that present 1 ingredient in many different preparations and textures.  The runny egg melded everything together.  I was expecting a bit more flavor vegetal sweetness from the peas overall.

Red Mullet Fillet spinach and mushroom gratin
This was probably my favorite dish of the night.  The fish was perfectly executed, crispy skin and moist, delicate meat.  The sauce was a delightful complement.  The gratin was not too heavy and the heady aroma of mushrooms was a real high note.

Foie Gras “Bitter Infusion” matcha tea, puffed rice, cooked and raw beets, duck consomme
The presentation was fun.  The “bitter infusion” was steeping right in front of us while we enjoyed our fish course.  The beets added color and perhaps some sweetness.  The matcha added the earthiness.  It really tasted like a cross between tea and soup. Despite all the show, the taste was just OK. 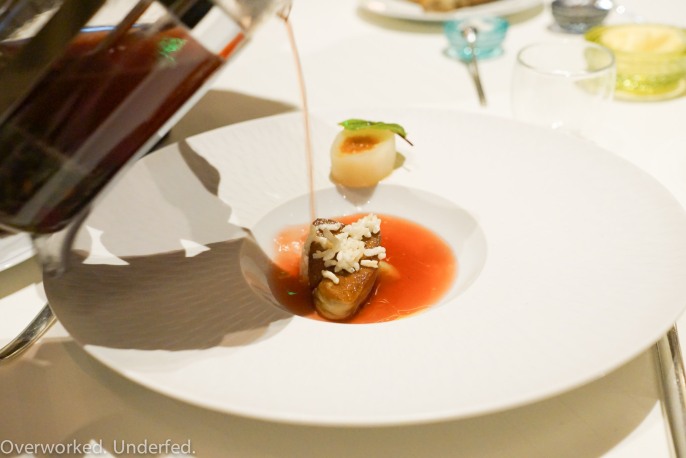 seared foie gras, puffed rice, bitter infusion, braised endive heart, kumquat puree
The foie was well prepared.  The puffed rice gave some crunchy contrast.  I can’t say I loved this dish.  The flavors were just unusual.  The kumquat puree was very sour.  The endives were a little lacklust.  I could not see how that “bitter infusion” was supposed to work with the foie.

Artichoke and Black Truffle Soup shaved black truffle, parmesano reggiano
This item remains on many of the tasting menus, even the ones in the Paris restaurant.  I’m not really sure what artichokes truly taste like.  I can’t say I could tell you even after eating this.  On top of that, the black truffles had ZERO flavor.  It was the most bizarre thing of the whole night.  We suspected the restaurant might have been duped and got stuck with counterfeit black truffles from China.  Sadly, the cheese was the most flavorful component to the soup. 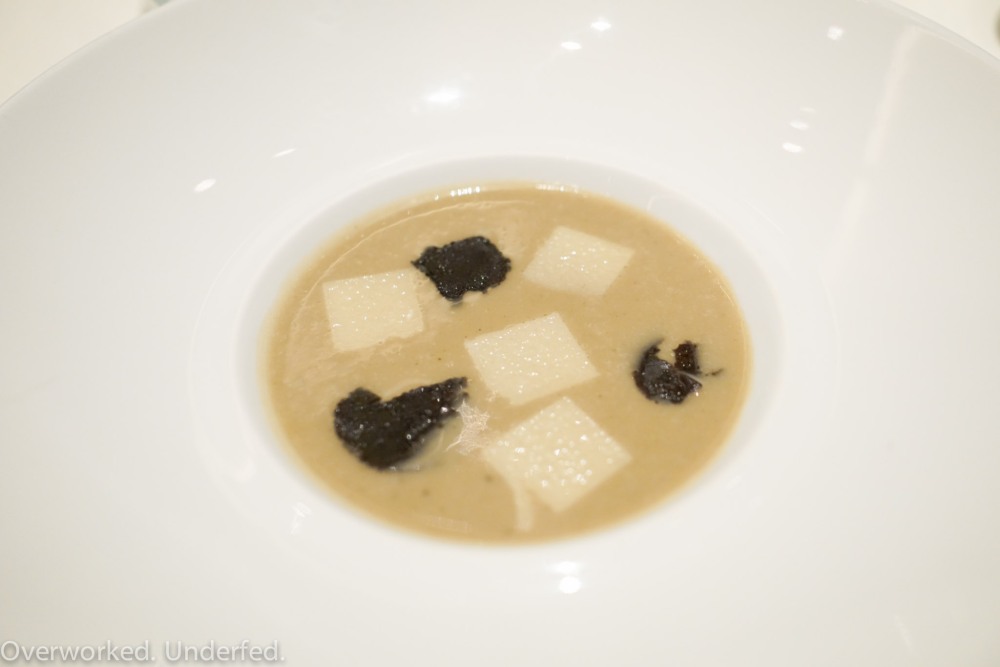 American Prime Beef Tenderloin braised paleron, baby heirloom carrots, potato puree
I am always so full by the time the beef course rolls around.  I still got a few bites of every component.  That whitish blob on the tenderloin was bone marrow, with its distinct fatty meaty flavor.  Standalone, the tenderloin wasn’t particular interesting. 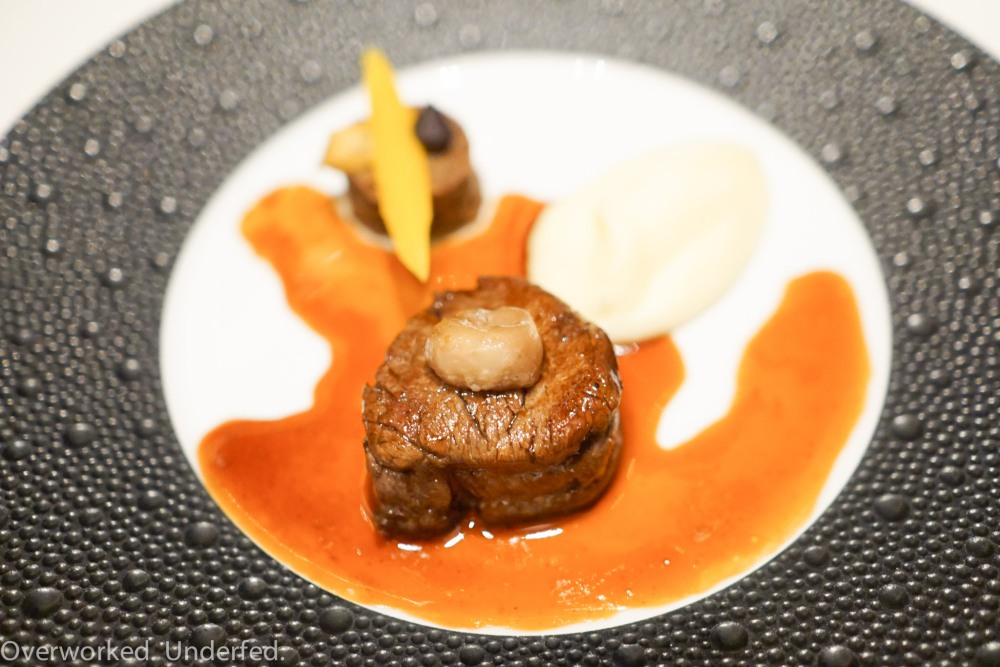 I quite enjoyed the braised paleron (aka top blade roast).  It was small but packed with flavor that was well complemented by two types of mustard

Fine Cheeses
I am no cheese aficionado, but I try to appreciate this very essential aspect to French dining culture.

I selected a range of hard and soft cheese.  I stayed away from the blue cheeses, but The Annoyer tried some and I liked it too.

Strawberry
To my delight, strawberries were highlighted in one of the dessert courses.  I almost cleared the plate clean.  Hard to go wrong when you are working with sweet seasonal fruit. This was one of the few dishes in which we found no criticisms.

Chocolate Fondant crunchy praline, chicory cream
Another favorite of mine, chocolate.  It was like a reminiscent of a Kit Kat bar with a dense chocolatey layer on top of a crunchy layer.  It was delicious, but hard to finish because it was dense and rich.

We were in a rush to catch a show so were unable to partake in the extra dessert cart at the end of the meal.  I was pretty bummed, because it included various treats like macarons, madeleines, and ice cream.  It was not nearly as elaborate as the cart at Joel Robuchon, but the treats here looked a little more substantial.

Overall, the food here was not bad.  Everything was properly executed and seasoned.  The reputation, accolades, and price point just set the bar very high.  Unfortunately, Guy Savoy fell hugely short of my expectations.  I wondered if we had ordered the Innovation-Inspiration menu (their top tasting menu), would our experience have been better.  The Annoyer passionately argued that one’s “signature menu” should deliver on the “signature items” and it surely did not.  We agreed there was absolutely no excuse for the horribly tasteless black truffles.  It was an almost criminal culinary offense.  Not that I’m that particular when it comes to service, but one of the waiters came off a bit brusque.  I didn’t appreciate his hurried explanations and lack of warmth.  That only added insult to injury.  I just expected more from a restaurant of this caliber.  Don’t waste your money here.