Barcelona had no shortage of fine dining options. It was rather difficult narrowing down the selection to just a few. I settled on Espai Kru and Disfrutar. The latter because of its connection to El Buli (more on that later) and the former because of the strong blogger and TripAdvisor reviews as well as its raw seafood focused menu. The Annoyer absolutely loves raw seafood. For me, I can only have it up to a limit before I start to feel a little nauseated.  Espai Kru is the the fancier and more modern, seafood focused sister restaurant to Rias de Galicia, which is downstairs.

It’s not hard to notice that Spainards eat REALLY late. Most people around the world probably have dinner between 6-9pm. Spainards, on the other hand, eat between 8-11pm. It’s seriously crazy to start eating a big ass meal at 10pm! While traveling, this actually works out for us since we eat such big lunches that we’re never hungry until later anyways. But at 8pm we were the first and only diners at the restaurant.

Bread & Butter
Buttery toasts with rich seaweed butter.  It was an easy introduction to the seafood packed dinner to come. 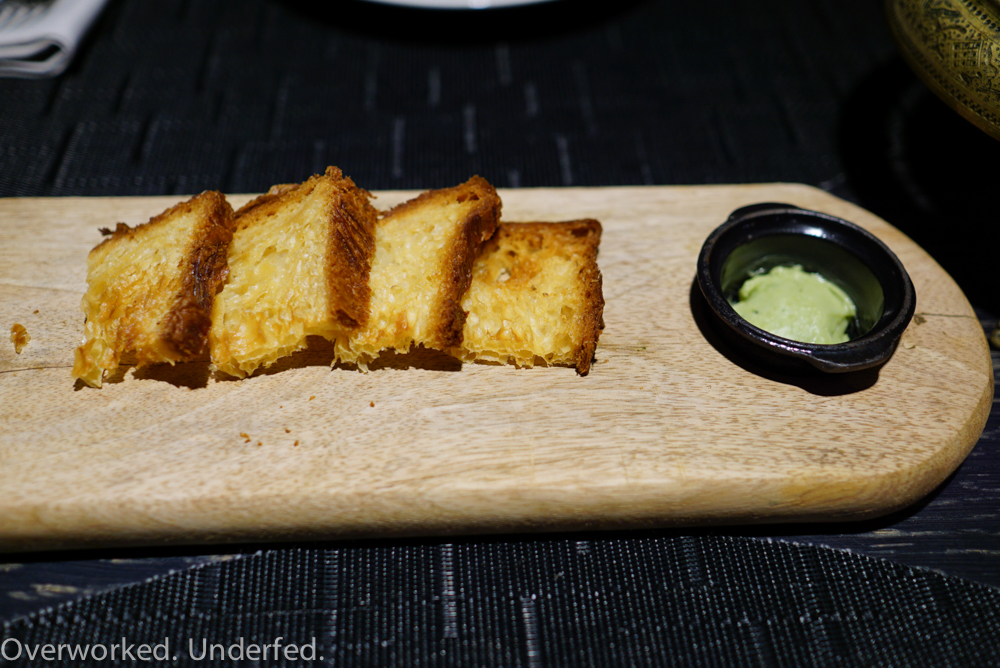 Ikura
They later brought out a generous helping salty ikura to eat with the bread and butter which we liked.

French Oyster aguachile
The aguachile was VERY hard to miss.  It had a lot of zinging acidity that I really liked but The Annoyer thought it overpowered the oyster. 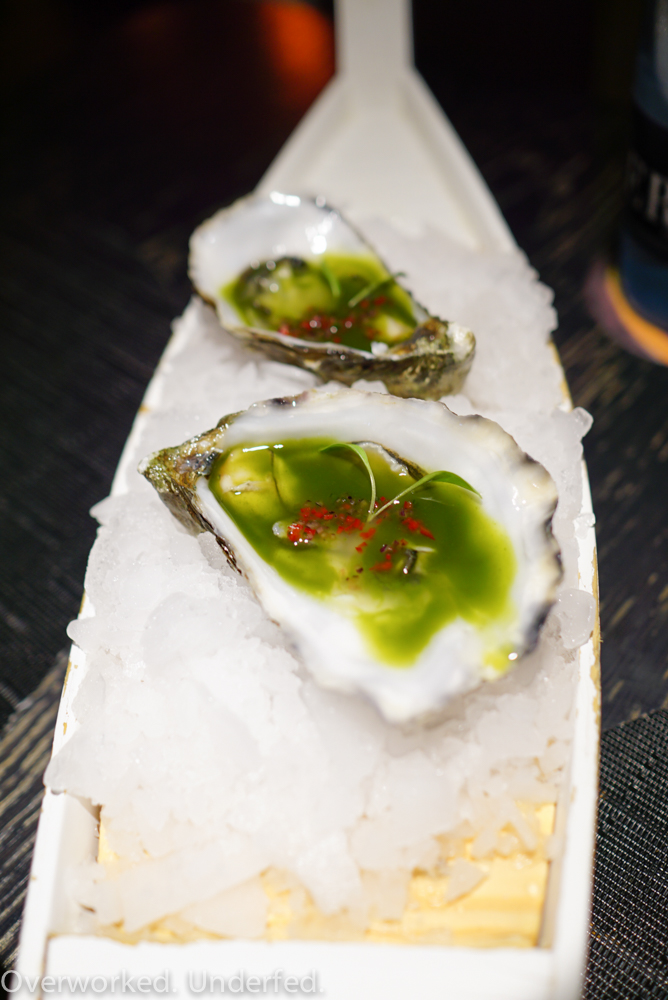 Razor Clams anticuchera sauce
If you’re ever going to eat a raw clam, it should be a razor clam.  Very sweet and meaty. The sauce was something of a sweet smokey salsa.

Classic Ceviche of Wild Dorada
Sometimes Peruvian ceviches can be too sour from an overpowering “leche de tigre.” This was just spot on. Plenty of meaty fish with bright balanced flavors for a ceviche.

Trilogy of Squid
The raw squid was almost as good as we had it in Japan, chewy yet tender if you can believe it. The salt and lime was the most simple and probably our favorite. The caviar added some luscious saltiness.

The 3rd version of the squid was a bit more creative.  I’ve had squid served like pasta once or twice before. It’s always a fun twist.  Here it was topped with an arrabiata sauce with a nice kick that channeled the Italian inspiration well. 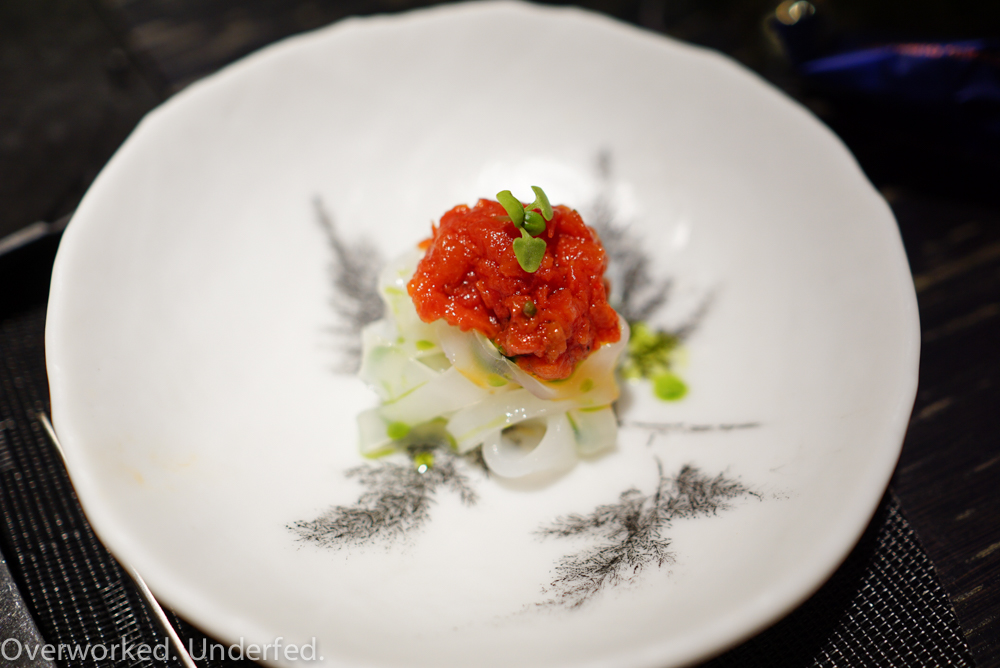 Horse Mackerel
Mackerel
White Tuna
Hamachi
Alaskan Salmon with its roe
Things started to take a turn for me. One, I was getting full. Two, the rawness was catching up to me. The next few courses were various types of sashimi from the Mediterranean and Pacific. Knowing that a lot of the bluefin tuna I’ve eaten back home and even in Japan come from Spain, it was interesting to experience it here. It was a bit disappointing on the whole. The fish just didn’t taste as clean and the sauces and accoutrements just felt a bit meh. Though, the toro with black truffle was quite delightful. The roasted toro was a bit too fishy.  I think the fish would have turned out better in more skilled hands.

Toro Tartare corn “flan”
I can’t say I’ve had raw tuna paired with corn before.  The flan was smooth but I would have liked it to be a touch sweeter to really bring out the corn flavor.  An interesting dish 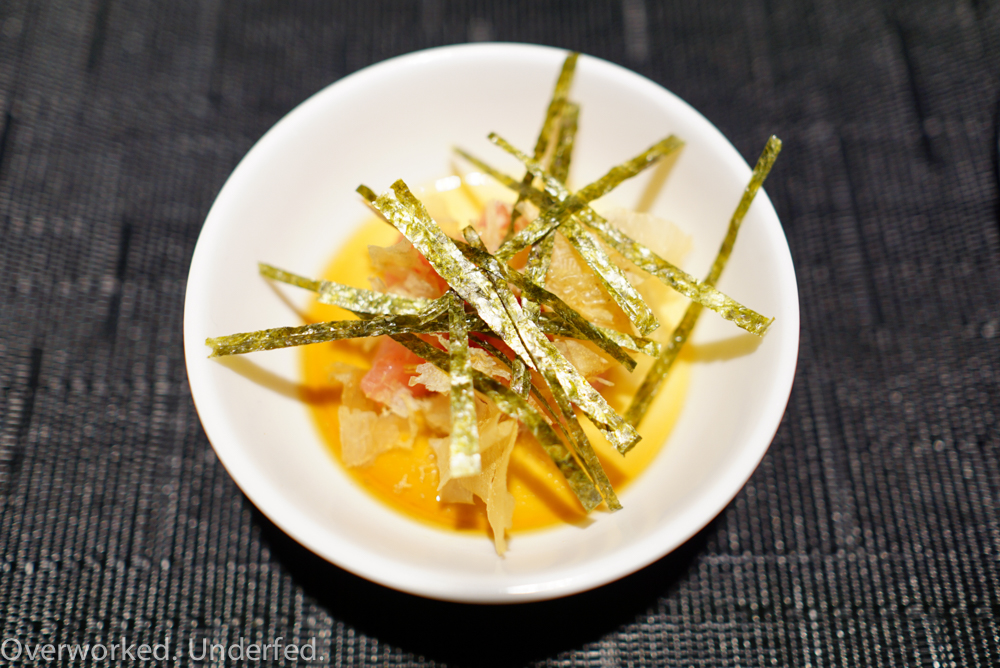 Slightly Roasted Toro
Toro black truffle melanosporum
Chu Toro osetra caviar
Akami wasabi and soy sauce
I’m sure The Annoyer was simply salivating over round of sashimi.  I, on the other hand, was disappointed.  I know the place is known for “lightly cooked” food, but everything was straight raw up to this point. 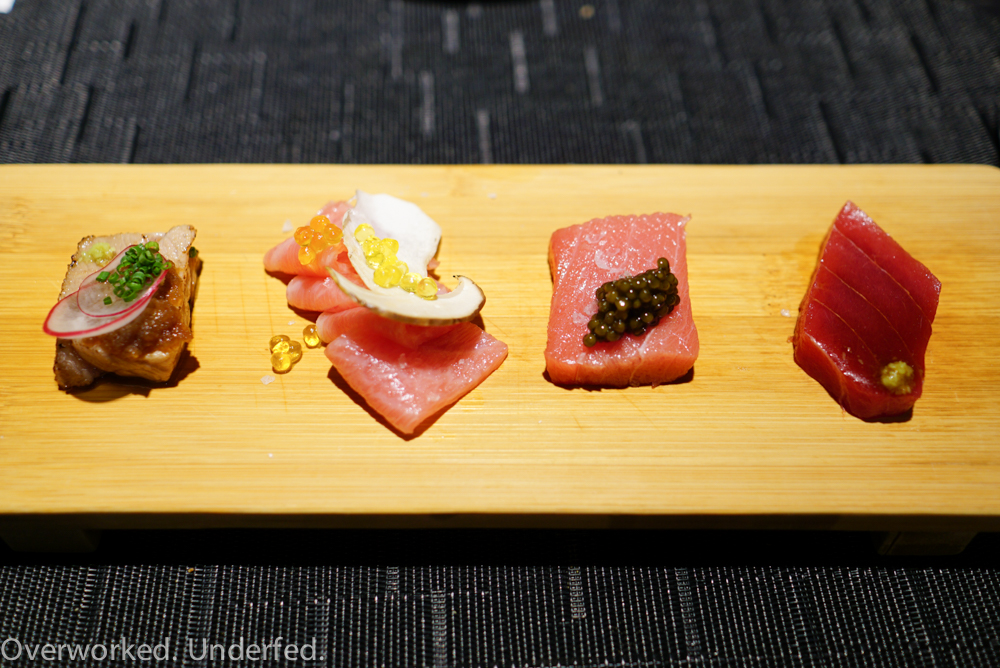 Lobster Tartare toasted patacones
Raw lobster is not a common thing in the US, since I’ve only ever had it in Korea.  It’s similar in flavor and texture to raw shrimp, though maybe slimier?  It does not sound appetizing but I enjoyed it, minus the heavy dollop of mayo-y like sauce.

Garlic Prawns from Palamos
This was probably the most cooked of all the seafood courses, though just barely.  The sauce was rich in garlic and shrimp flavor.  This was one of my favorite courses.

Thai Lobster Soup
The presentation was lovely with this fragrant soup in a cute little coconut shell bowl.  The scent of lemongrass and shellfish was light.  It was a good change of pace in the courses.

Eel
I wasn’t a big fan of the eel.  It tasted too strongly fishy for eel.  I was also so very full.  It would have been hard to enjoy anything.

Wagyu Tartare tobiko
At last, we moved from sea to land!  The Annoyer enjoyed the tartare.  I barely had any. 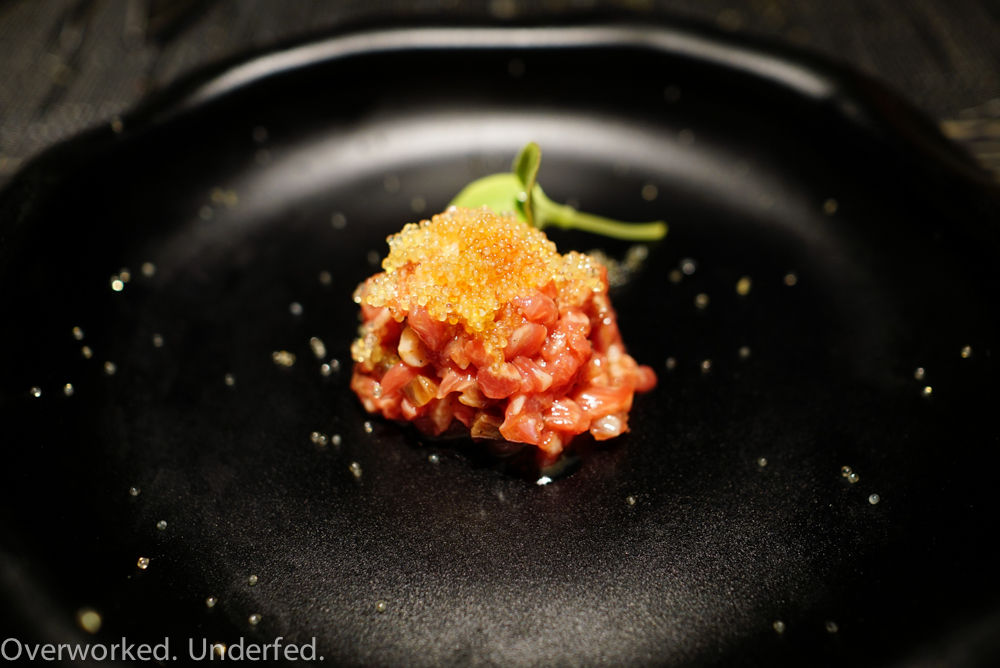 These were kind of salty on their own, but very thin, light and crispy

Tuna Cheek artichoke and foie
This was a terrible dish.  The foie was heavy.  The tuna little too fish.  The artichoke did not complement any of this.  FAIL. 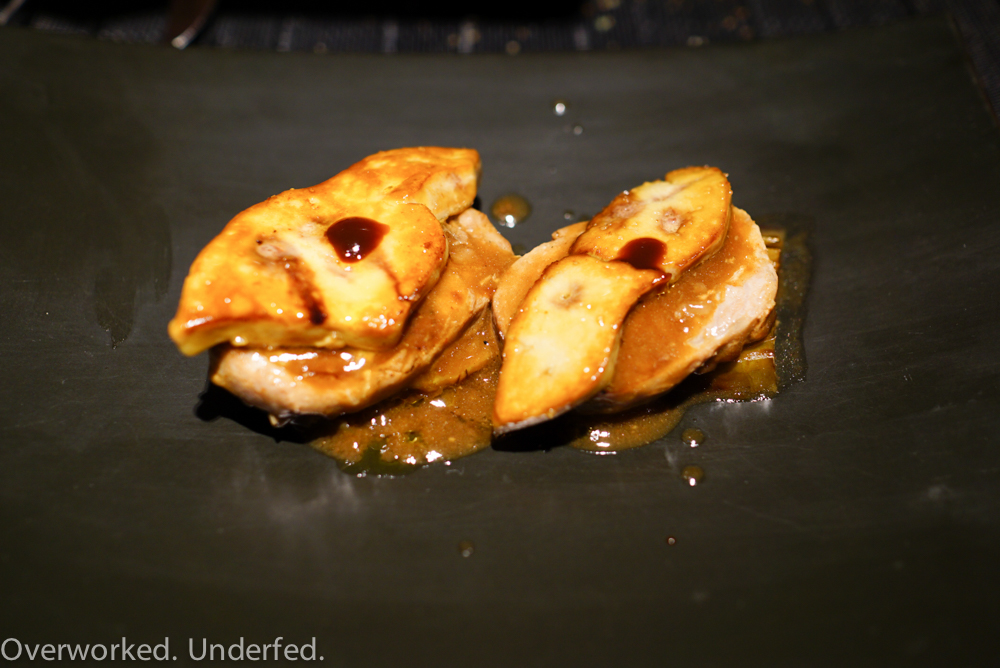 Caramel Coulant sorbet of sponge cake with schnapps
I was incredibly full from the barrage of mostly raw seafood, and I was very excited to dig into something different.  I had no idea what a “coulant” was, but it really didn’t matter because this was ALLLLL kinds of deliciousness.  There was something like cake, something warm, something crunchy, something ooey and of course something gooey.  Later on, I found out “coulant” is like a lava cake.  This was an awesome caramel lava cake a la mode. 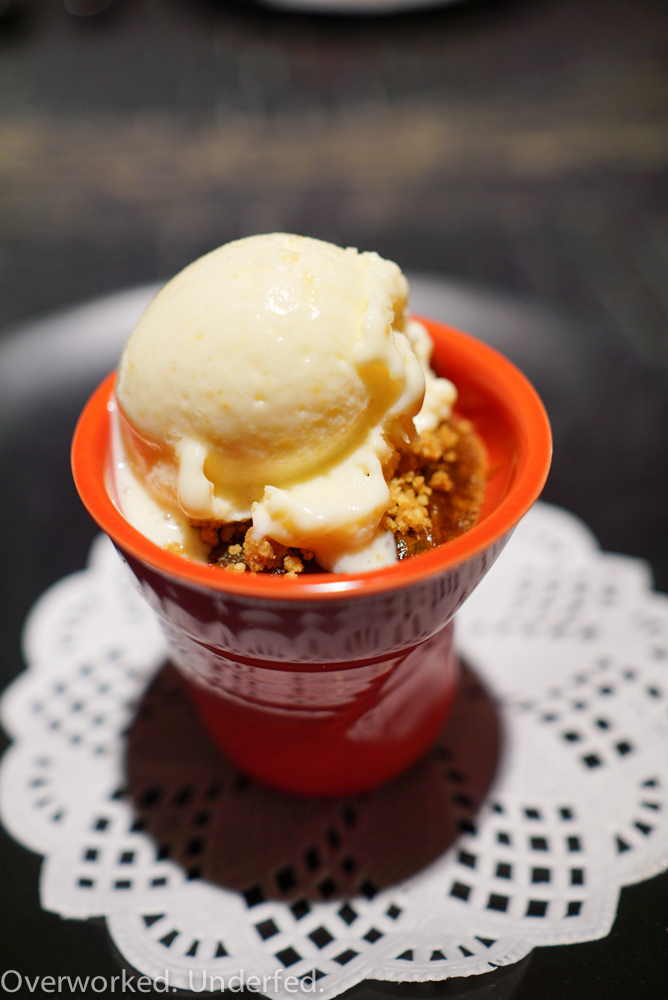 Cream of Ice Cream iced guava drink with rose water
The name of the dessert is so weird, but I just copied it from the menu.  Basically it was  guava ice with plain ice cream (not vanilla) with a dropper filled with rose water.  It was refreshing and perfectly satisfying.  The ice cream was wonderfully creamy.  Loved it! 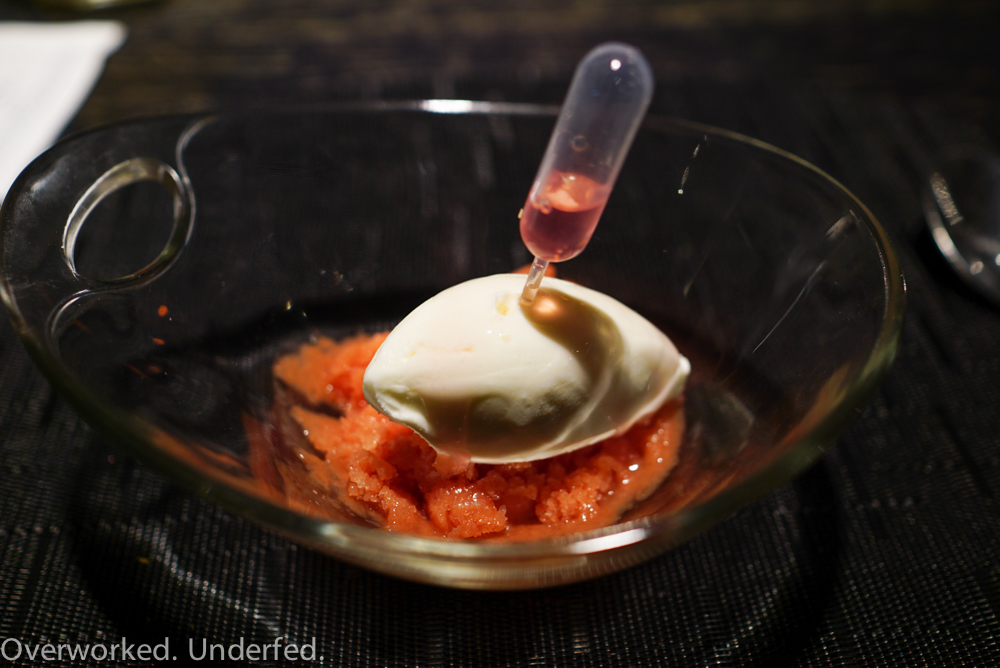 For this multi-course seafood feast, we paid only 100 euros per person. For some of you that may still seem like a steep price to pay, but I have easily paid more for a lot less.  Granted, I was pretty sashimi-ed out by the end of the meal, I still appreciated Espai Kru for the great value.  We were stuffed.  We felt the ingredients were very high quality.  The innovation was there, but perhaps fell a little on some of the courses.  I think ultimately I look back favorably on this meal because the desserts were really quite good.  It’s really key for a meal to end strong.  If raw seafood is your thing like it is for The Annoyer, pay Espai Kru a visit.