The H.o.P. strikes again! We did what we do best, EAT! Here’s the quick rundown:

Holiday weekend plans in my house always seem to revolve around food, especially when my sister is running the show =)

On the way to running some errands, we stopped by a papuseria, or maybe it was just an El Salvadorian restaurant in Costa Mesa or Newport Beach that served papusas. First time I’ve eaten a papusa, but according to wikipedia:

“A papusa is a traditional Salvadoran dish made of thick, hand-made corn tortilla (made using masa de maíz, a maize flour dough used in Latin American cuisine) that is filled with a blend of the following: cheese (queso) (usually a soft cheese called Quesillo found in all Central America), cooked pork meat ground to a paste consistency (called chicharrón, not to be confused with fried pork rind which is also known as chicharrón in some other countries),  squash (ayote), or (pataste), refried beans (frijoles refritos), or queso con loroco (loroco is a vine flower bud from Central America).”

It was definitely not a light eat, but it was served with slightly pickled cabbage slaw that really took the edge off the heaviness. We got 3 varieties, queso, chicharron, and shrimp. The shrimps were so punny, you could barely taste them. Really, they all sorta tasted similar. Not something I’d seek out but interesting to try for the first time. 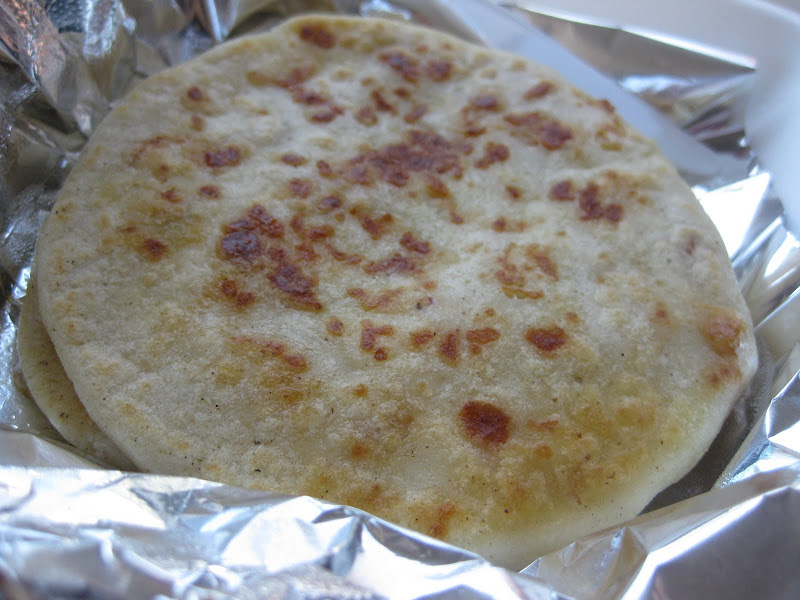 We headed over to Mitsuwa for their 2010 Umaimono Gourment Food Fair. Apparently Ippudo Ramen were one of the many vendors in attendance. New Yorkers stand in line for hours to have a bowl of this famous ramen. Why it is so famous? I don’t really know. What was so special about it? I don’t really know. Was it really as good as the hype? Certainly not! It was tasty I suppose, but I like my Santouka ramen easily over this bowl. Especially since I don’t have to stand in a huge line, not just waiting to get a bit to eat, but also to find a place to sit! Man was Mitsuwa teaming with foodies. People were stalking near empty tables in hopes of snagging some food court real estate. I think my brother actually got in a little confrontation with some lady who came out of nowhere and took the table he’d been waiting for.

Anyways, on to the food. The ramen was definitely flavorful having that richness from stewing pork bones for hours, but nothing out of this world. Maybe New Yorkers have lower standards when it comes to ramen? I don’t think they have Shinsengumi or Santouka out there. Maybe if they did, Ippudo wouldn’t be all that. 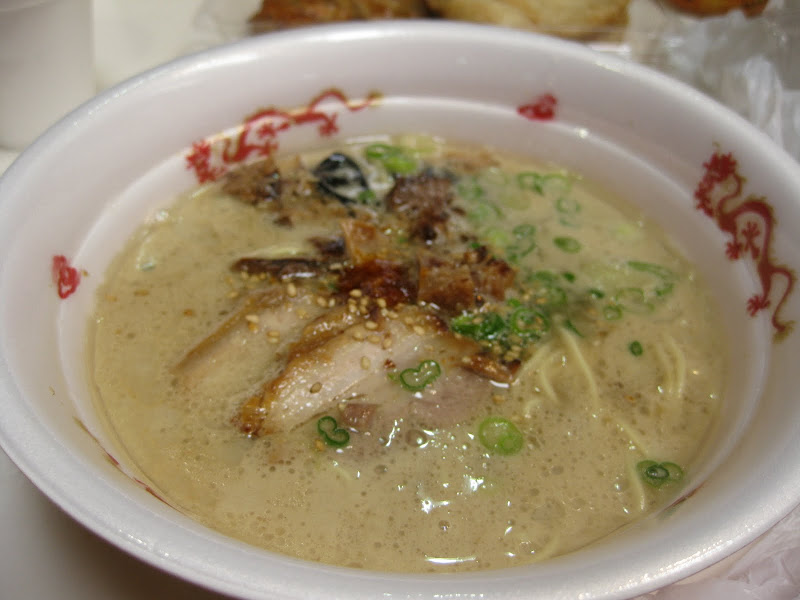 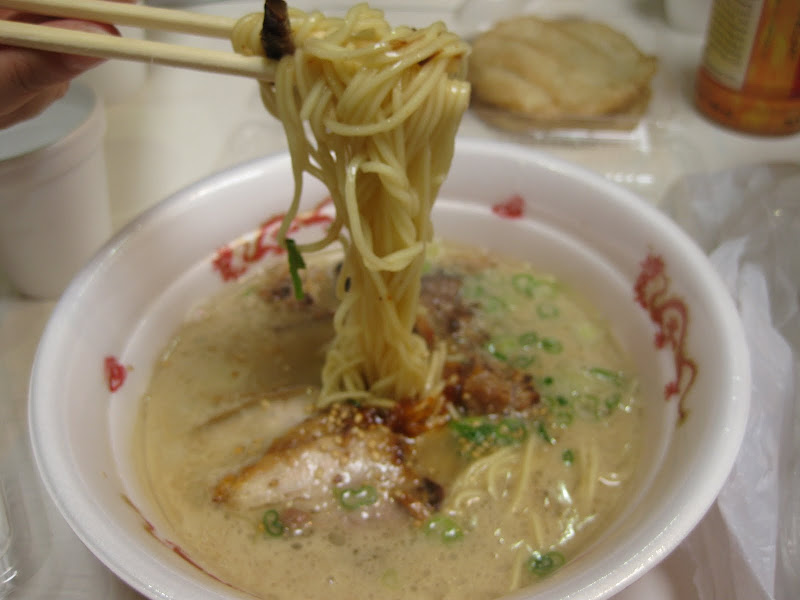 The fair also had various sorts of fish and squid cakes, as patties and on sticks. I don’t know why, but I love all sorts of mystery meat concoctions. Fish balls, shrimp balls, sausage, hot dogs, meatballs. You make it, I’ll eat it! I won’t say that all the fish and/or squid cakes were that good, but I happily devoured them. 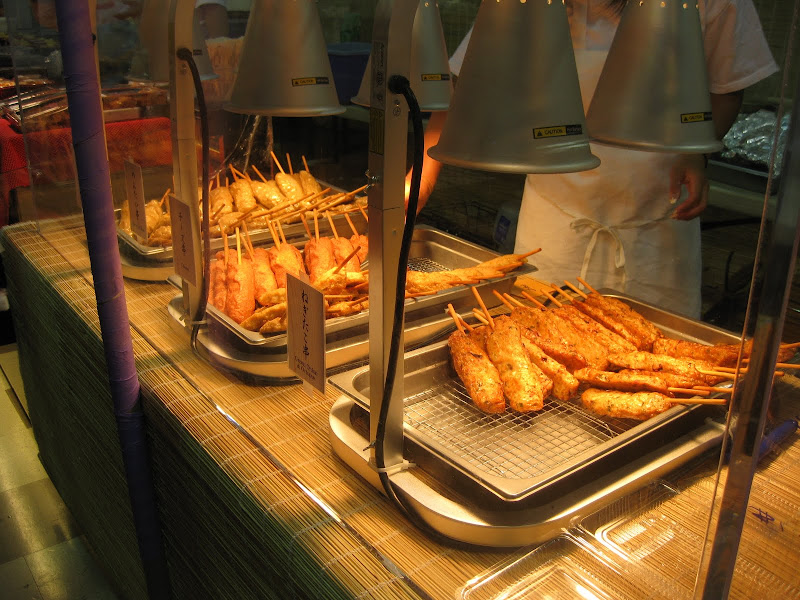 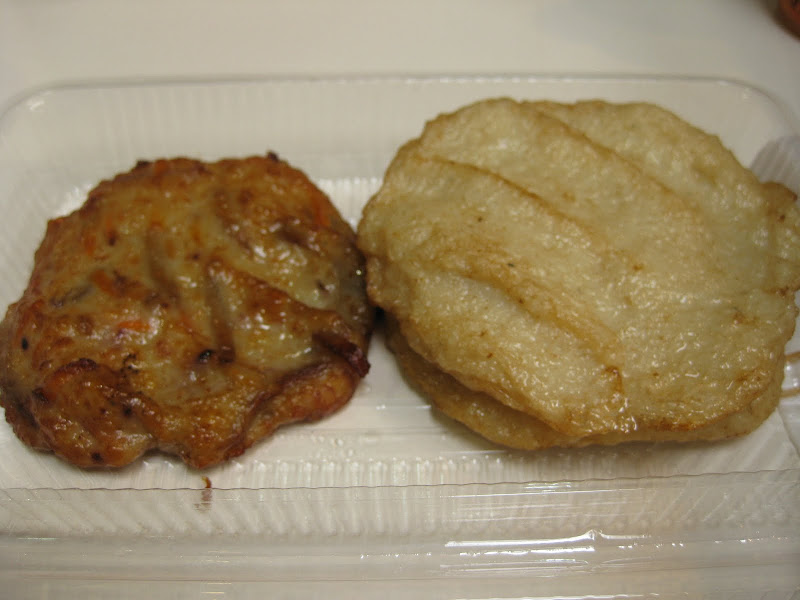 My brother and Triple T had already tried the takoyaki balls at another Mitsuwa and said they weren’t that good. Despite that, the H.o.P. had to try it. 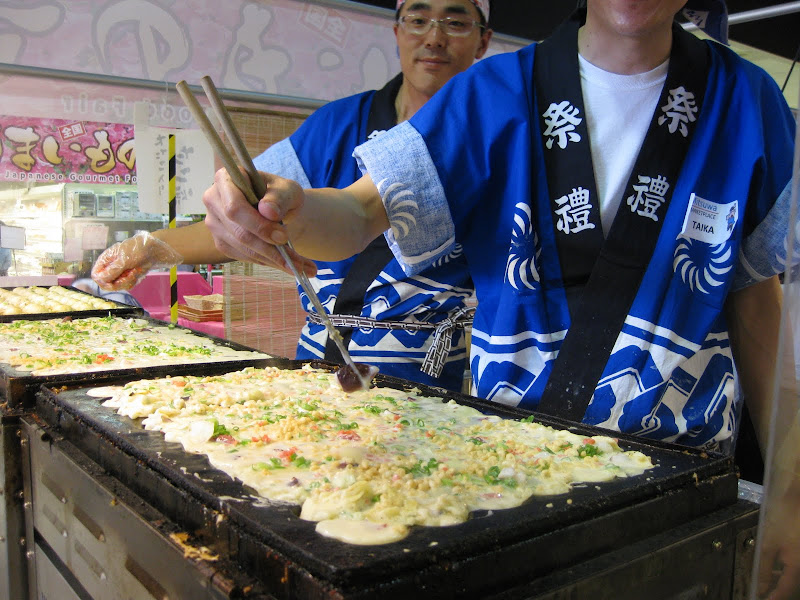 These guys were so cute, posing in the picture, when really all I wanted was pics of them making the takoyaki. Poor guy got his head cut off =( 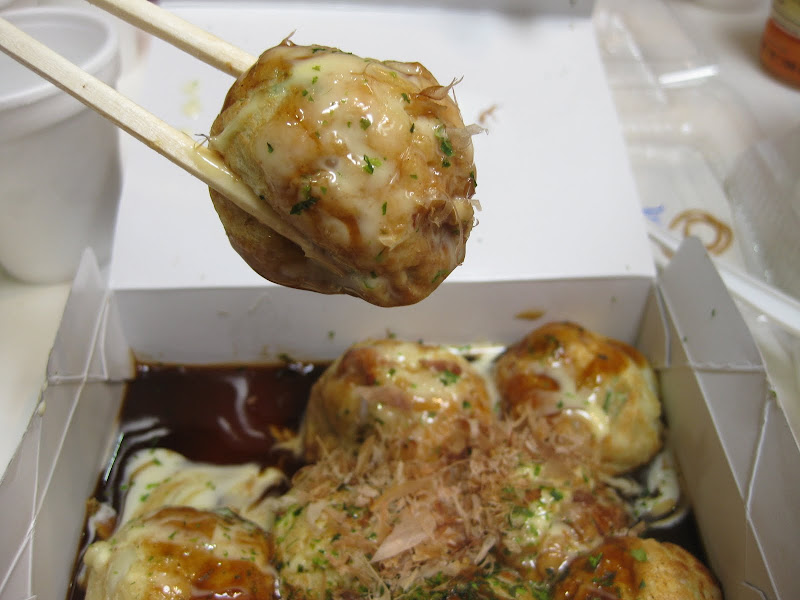 I guess a major complaint was that the balls are just mush pills slathered in sauce. I would agree. The chunk of octopus in the middle was mostly flavorless, but at least it wasn’t chewy. This was my first time having takoyaki that I could remember so I guess I don’t have a basis for comparison. I would still be up to trying takoyaki in the future.

So after we were stuffed silly we proceeded to do some light shopping in the Mitsuwa market and found some interesting creations. 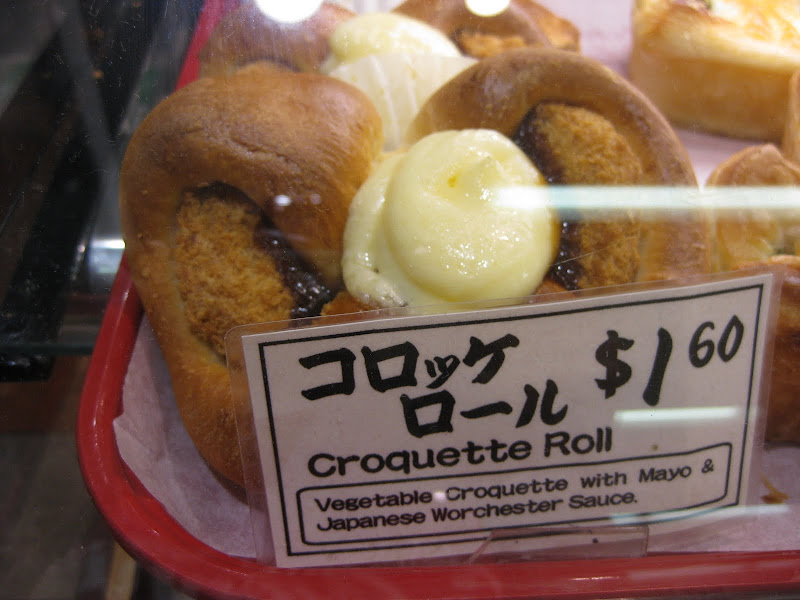 Who would eat that?!?! A croquette is already fried, and now you go wrap it in bread and slather it in mayo?? Not as bad as a deep fried Twinkie but I think it belongs in that food category of totally unhealthy and unnecessary!

To continue our Japanese food festival, we went to this place in Costa Mesa called Kappo Sui. My brother heard of it from his very Japanese friend. This place is so Japanese that they have an English menu and a Japanese menu with entirely different items. We tried to order a bit of everything from both menus. I apologize at my poor descriptions because I don’t even know what I was eating half the time. The waitress would try to translate items off the Japanese menu and as long as the main ingredient didn’t sound like something awful or weird we were willing to try it.

We started off with a refreshing octopus salad. It was probably one of my favorite dishes of the night being citrusy with tasty pieces of octopus. 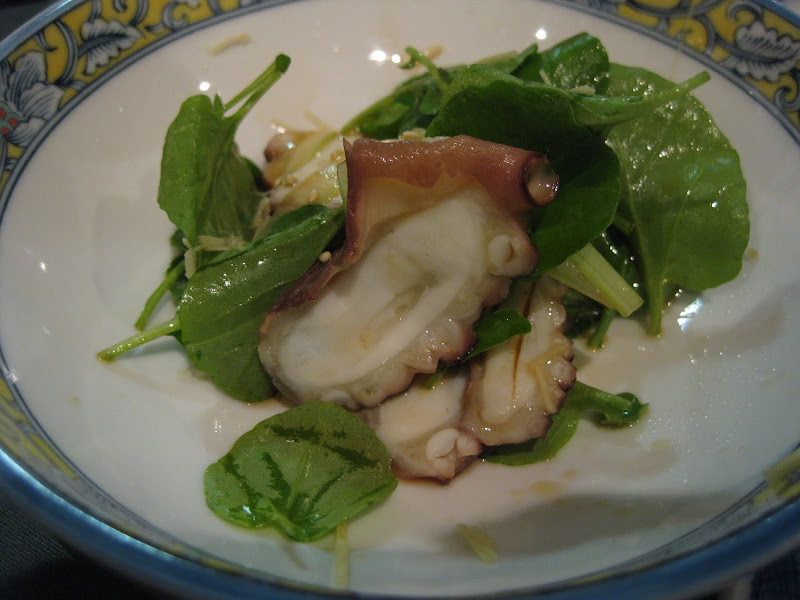 Of course we had to get aegdashi tofu. I guess there was something different with this one cuz there was all this extra junk on top. I’m not quite sure what all that white mush was but it was sorta slimey like maybe they took a grated daikon and added something to it to make it so slippery. It was a good aegadashi tofu but not the best. The best aegedashi has this gelatinous batter on the outside. So strange but soo good. 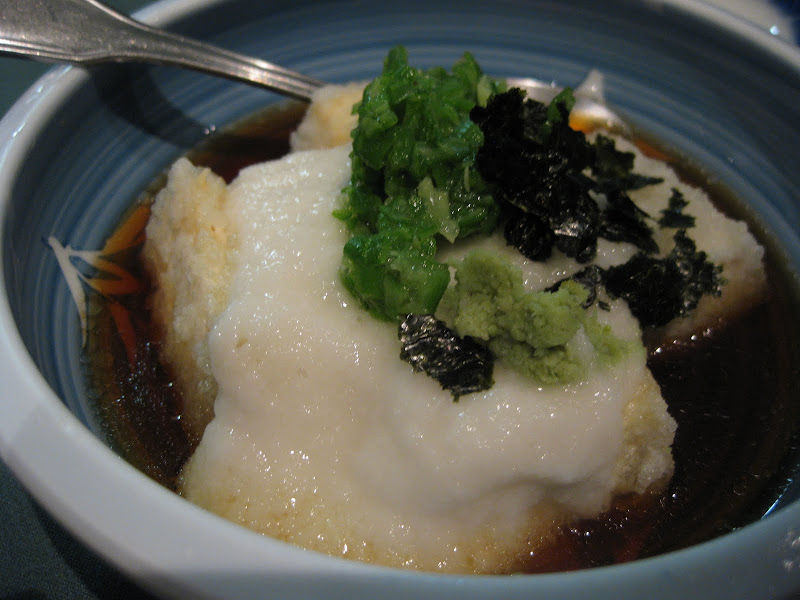 The sushi was pretty standard. Good quality. Can’t remember much more than that. I don’t think the place is necessarily special for sushi as it is for all the small dishes. 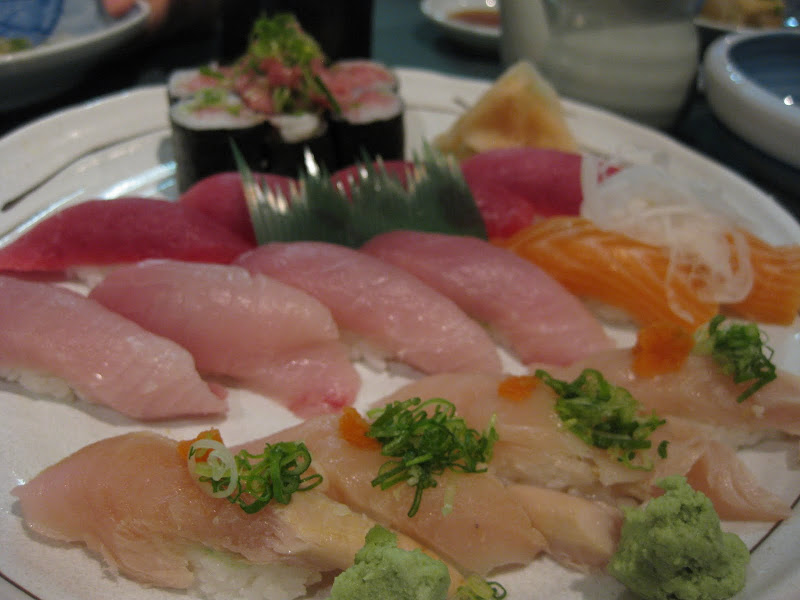 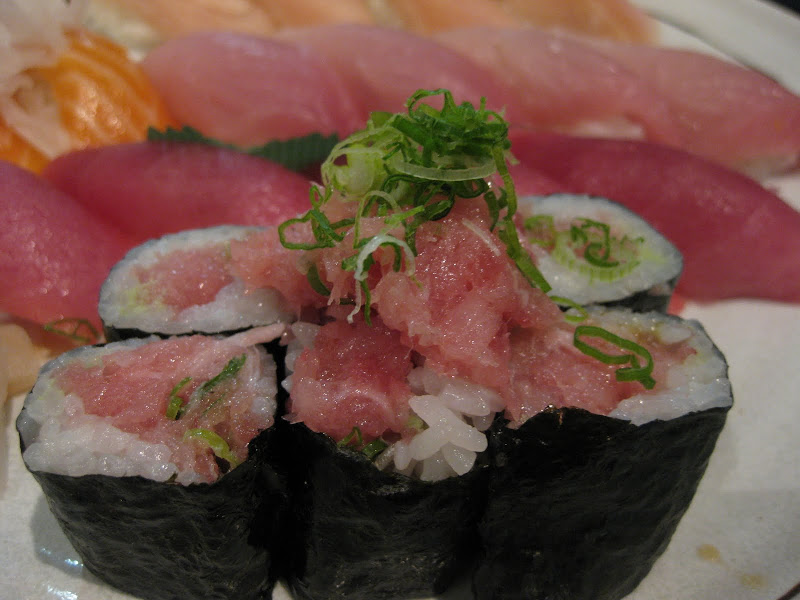 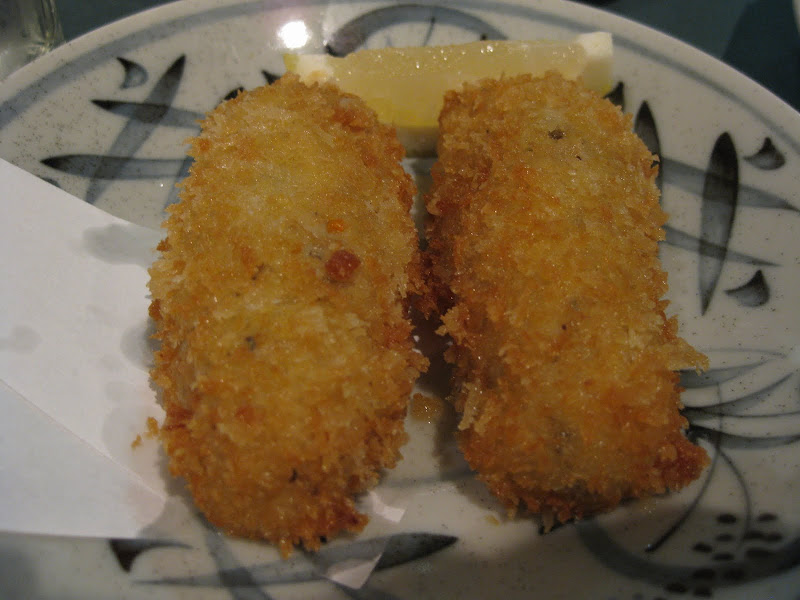 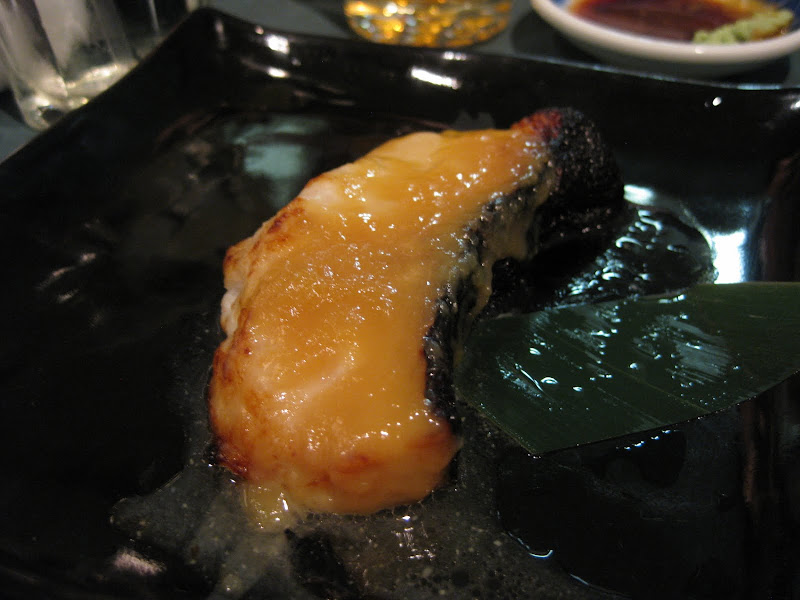 Amberjack. Fishier than I would have preferred, but with a nice grilled smokey taste.

Chawanmushi. Did I spell that right? An egg tofu custard. Freaking HOT as hell, kept burning my lips and mouth trying to get some. It had this wonderfully silky smooth quality about it. Also a flavorful dashi broth surrounding it. 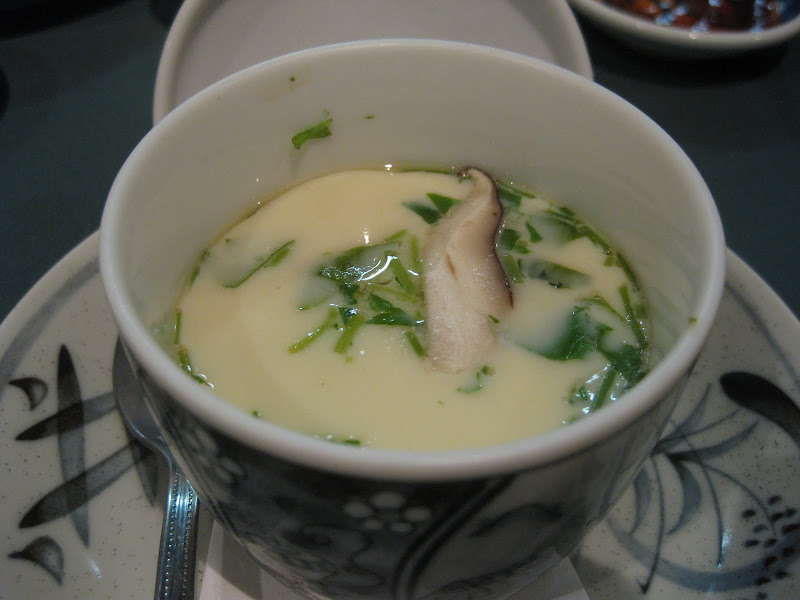 This was a surprising favorite. Amberjack cheek, which I had never had before. I’m not sure what the pickled thing on top was, but it had a refreshing citrusy taste, that complemented the taste of the raw fish very well. 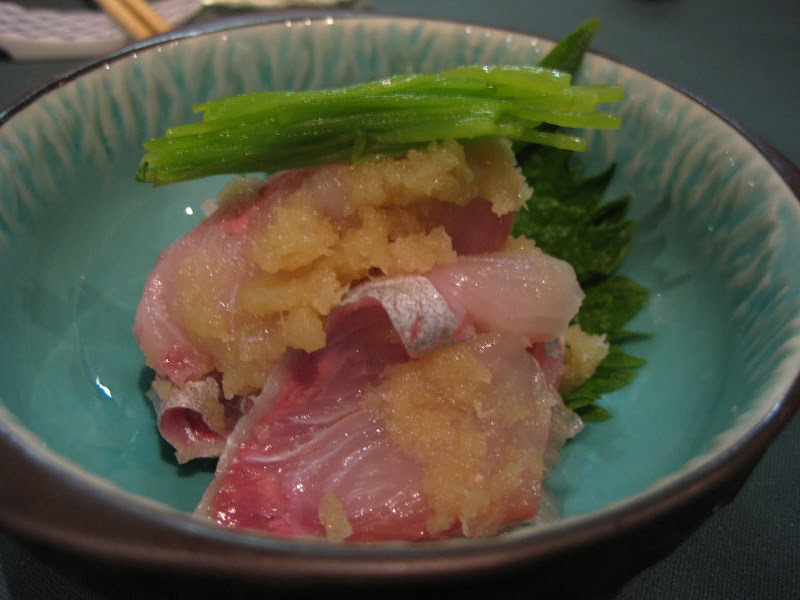 We weren’t sure what sort of noodles were. It sounded something like Inanie? Inaninani? It was served ice cold with a dipping sauce on the side. Sorta like how soba is served, but the side sauce was different and the texture of these noodles was much more on the al dente side. We also ordered these noodle hot like udon. It was also very enjoyable and so clean tasting. 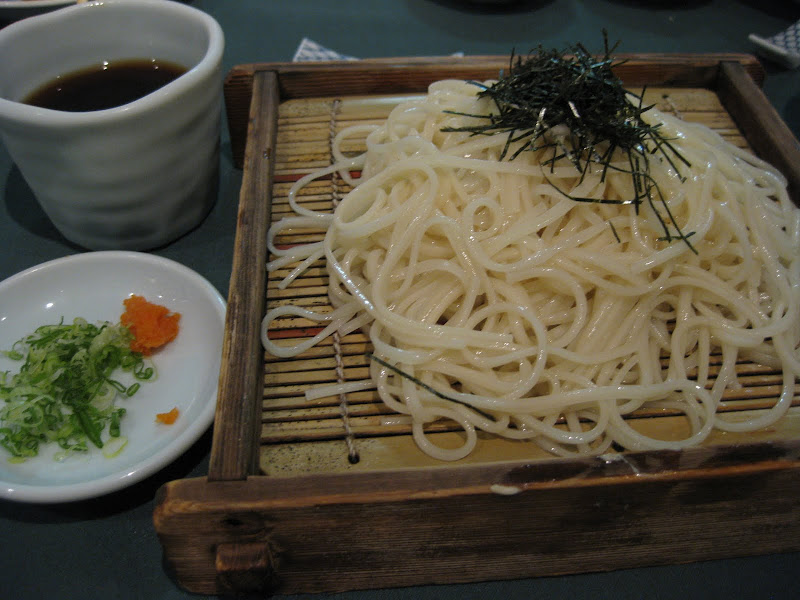 This was probably one of the more expensive dishes of the night. Grilled prawns. Oddly enough the tastiest part was the head, which I usually avoid. Sucking brains out of poor sea animals is not so enjoyable to me. In fact most of the time its the nastiest tasting part, but for some reason, these suckers had good brains, hahaha. The body of the shrimp was overcooked and mushy, what a shame! I wanna say 2 shrimps costs $18? I could only guess at what the japanese menu was advertising. 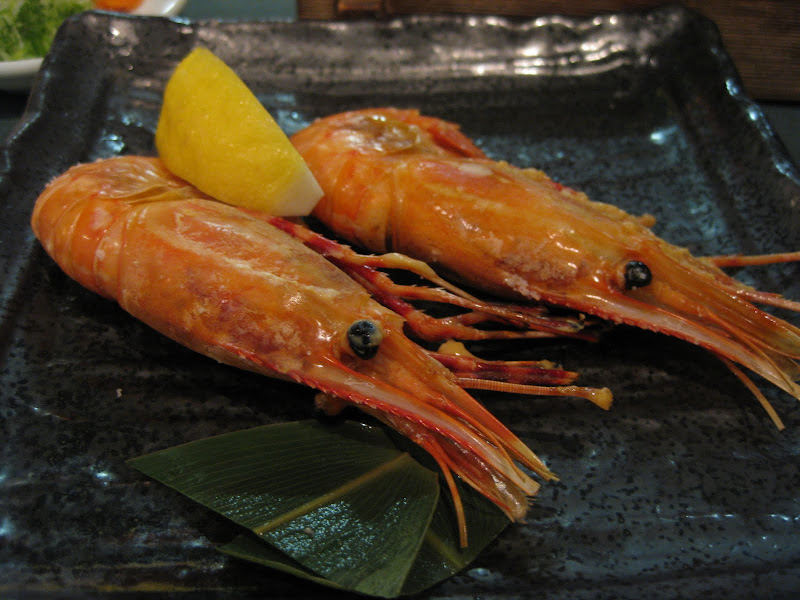 All in all, I felt like I was a real Japanese person after eating here! It also helped being surrounded by buncha Japanese Japanese people, haha. Oddly though the crowd was either Japanese Japanese or totally American, ordering chicken teriyaki and sushi. It would be nicer if the restaurant made the place more welcoming to foreigners instead of having a totally non English menu that hides away all the good more authentic things. I’d definitely come back again, maybe with a Japanese speaking person in tow to avoid the whole awkwardness.