We are always in search of new dumpling places. I stumbled across this place on yelp a while ago, but there weren’t that many ratings at that time so I was not willing to take a risk on a potentially crappy restaurant. Since then, this place has amassed a good following for being good and cheap. I think when the place first opened up they had some crazy deal for the XLB, maybe buy one get one free or something? Triple T and RCM went and they weren’t that impressed, but Dumpling Man and I decided to give it a try.

The place is pretty typical of a fobby restaurant, shoddy service and dingy conditions, but tastey and cheap food. All the portions were pretty great! Plenty of leftovers to take home. We coulda gone with 3 dishes instead of 4 and been completely satisfied, but we over did it.

The shanghai rice cakes were my kinda rice cakes. They were disappointingly pale, but had great flavor mostly because of the fabulous “wok hei” taste. Dumpling Man very much dislikes anything that has that “wok hei” taste. Sometimes I wonder if Dumpling Man really is Chinese at all. Aside from the taste, it had a nice plentitude of veggies, mmmmmm! 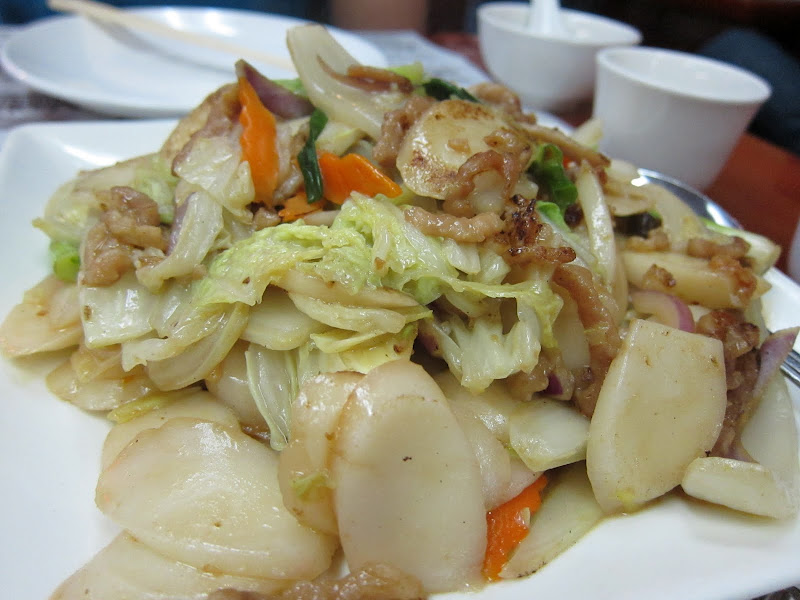 I dunno why we ordered this. I like this dish at Dumpling 10053, but I agree it is quite heavy and too much for only 2 people to eat. This dish was certainly subpar, and a waste of space. First you gotta start out with a great onion pancake which this certainly was not. It was just greasy and soft. We had a lot leftover of this one. 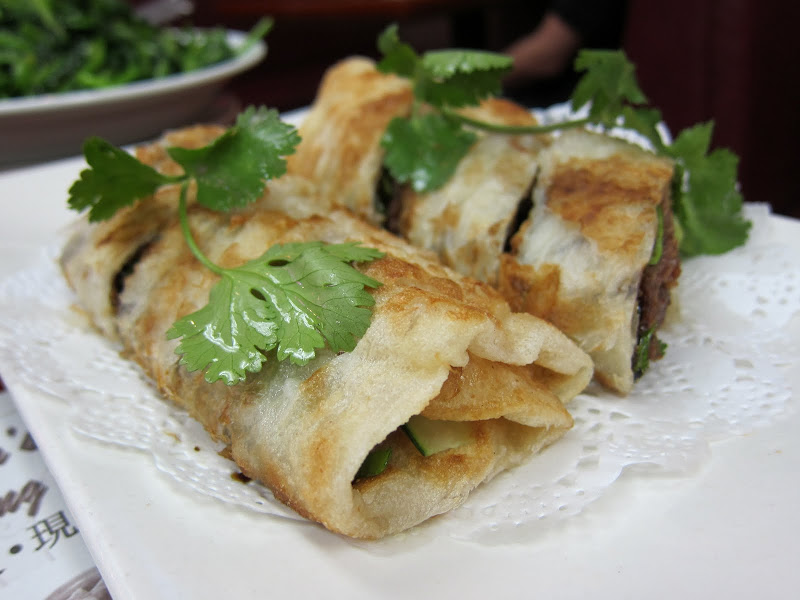 I love snow pea leaves stir fried with garlic. I mean LOVE LOVE LOVE. Once upon a time I tried buying and making it myself. I learned that the quality of snow pea leaves sold in the market is not the same sold in the restaurants, which makes sense since whenever you order this in the restaurant its freaking in the double digit range! Who charges double digits for a mound of greens??? Sometimes it can be more expensive than the protein! Anyways, its usually worth it because the vegetables are so tender and really pick up flavoring nicely without becoming mush piles. Anyways, when I tried making it at home I realized that you end up throwing a lot of it away because part of the snow pea leaf is very tough and should not be cooked. It was a tiring effort that I decided not to undertake ever again. This dish at Mama’s Lu was maybe about $6-$7? I was shocked, but I could tell there was a difference in the quality. It wasn’t as tender as the kind sold for like $14-$16, but I really enjoyed it anyways. You just can’t get snow pea leaves outside of a Chinese restaurant. 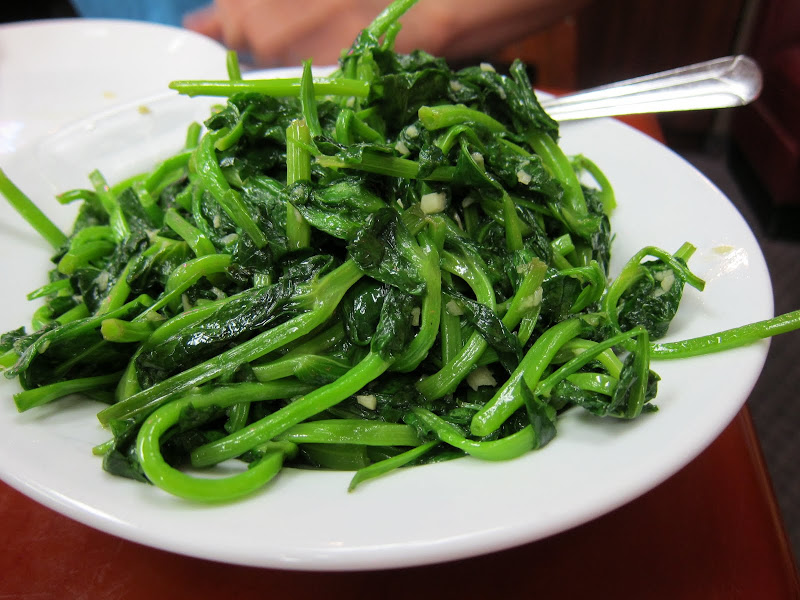 I forget what was in these dumplings. They weren’t that special. I’ll give anything to know what Luscious Dumplings puts in their dumplings cuz no other place compares. Most places serve dumplings that you probably coule make at home. Dumpling Man is not impressed with home made tasting dumplings. Unlike most people, he does not want to feel like his grandma made the dumplings. 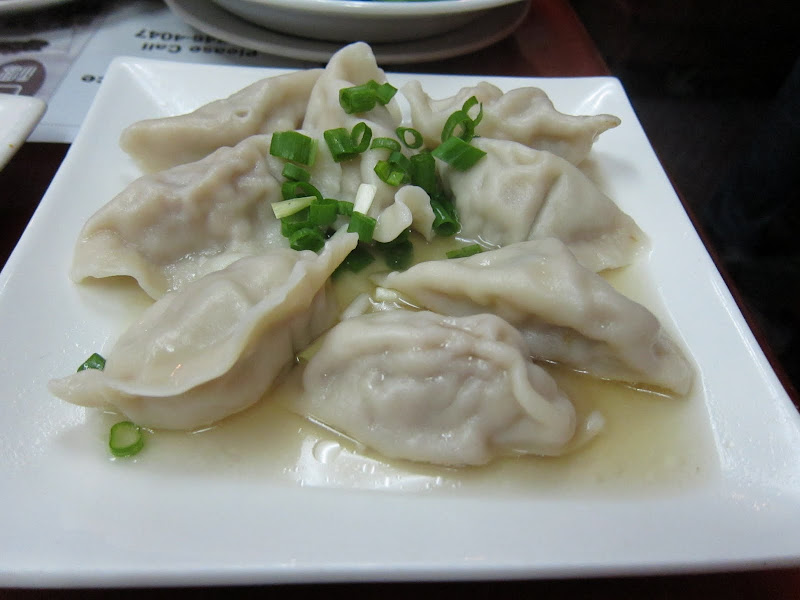 Lastly, the XLB! These were pretty tastey in a homey way. Nothing like the DTF xiao long bao, but flavorful without tasting like there’s MSG in them like the XLB @ Mei Long Village. They had a good amount of soup in them and decent crabbiness. Skin was a bit thick, but I sorta prefer my dumplings that way. Not the most impressive XLB, but certainly meets my minimal standards and certainly worth eating since its so darn cheap. 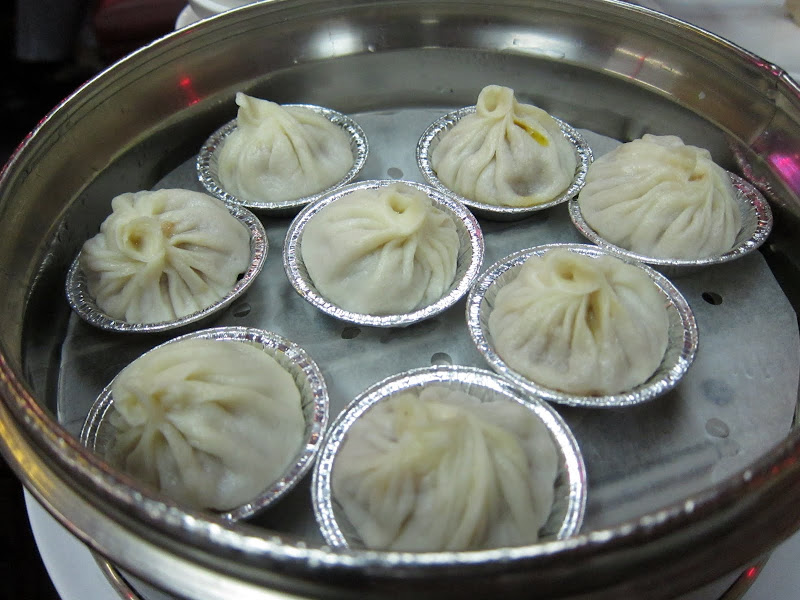 All in all, I would certainly come back here. I dunno if I can convince Dumpling Man to come back though! I think the total bill came out to $25 including tip ?? Pretty good if you ask me!