My first experience at Chef Amar Santana’s Broadway Bar was a bit underwhelming.  While things were good, I was expecting more pop considering Chef Santana made it all the way to the finale of this past season of Top Chef.  Going into Vaca, I still believed that he could deliver something special amidst the ho hum-ness of the Orange County dining scene.  While Broadway Bar is nebulously New American, Vaca leans decidedly Spanish.  Tapas is the name of the game here, and there is no shortage of it with its dizzying menu.  Everything looked so good and it seemed hard to go wrong.

Huevos Estrellados broken eggs, fried potatoes, chorizo
Overlord jumped on this at the waitress’ suggestion.  I was a bit skeptical eating breakfast for dinner.  It’s not even often that I eat these things period.  I was pretty impressed.  The potatoes were fried up to a golden crispy perfection.  The eggs were runny and blanketed the chorizo and potatoes in delectable richness. 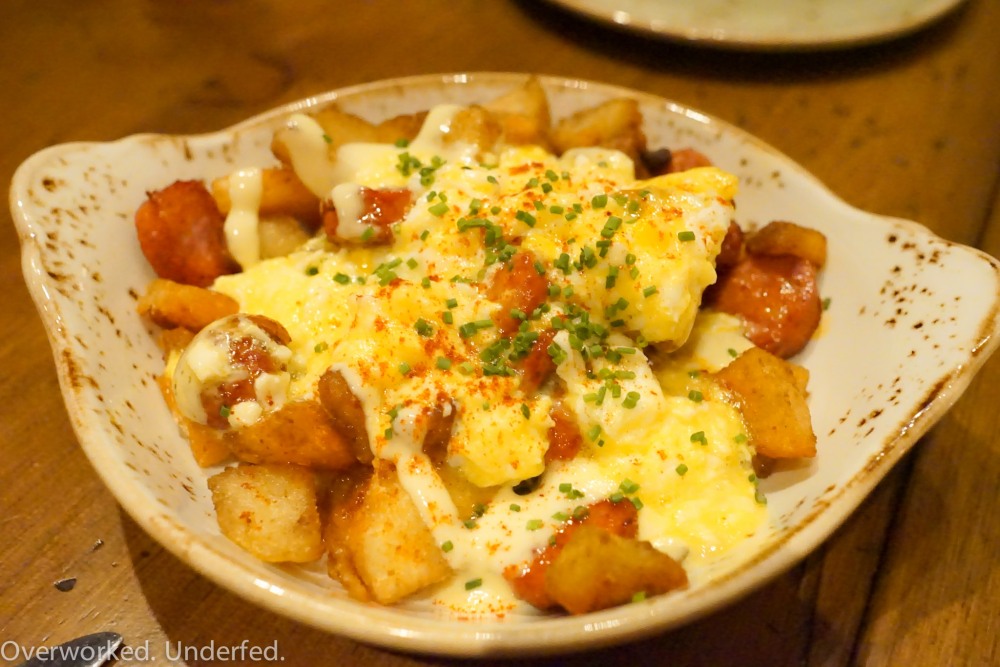 Jamón Ibérico Cinco Jotas iberian ham, aged 5 years
Ever since Triple F smuggled a smidgen of the highly prized and VERY expensive Ibérico ham back from her trip to Spain, I have been smitten.  The indescribable and incomparable flavor of this porky product puts the best Italian prosciutto to shame.  That’s saying a lot considering I also love a high quality prosciutto.  I guess there’s just something special about the all acorn diet these special pigs subsist upon.  I did not care much for the accoutrements here, though maybe this is how it’s eaten in Spain?  All I needed was that ham.  So YUUUMMMSS!

Albondigas roasted lamb meatballs, lemon yogurt, cucumbers
Teety recommended the meatballs.  Solid, but I don’t need to come back for these guys.

Pulpo a la Gallega warm octopus, fingerling potatoes, pimenton, spanish olive oil
This I would return for.  The octopus was just the right amount of chew.  The composition of this dish felt very Spanish with the spice, rich olive oil, and squeeze of lemon.  The lemon is really what brought it all together.  This kind of balanced harmony was really what I found lacking at Broadway Bar. 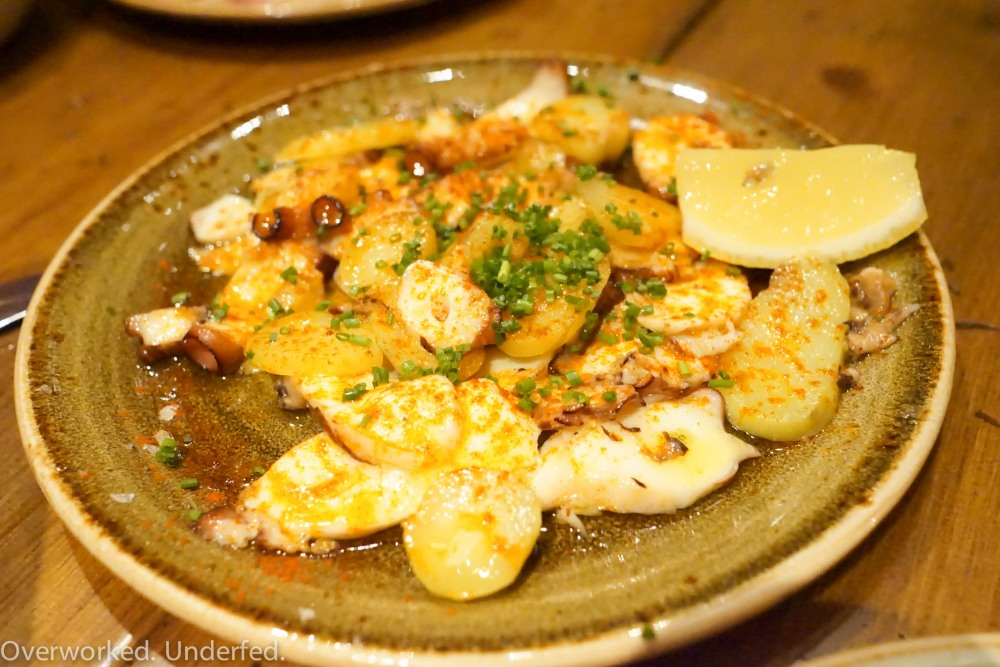 Canelon de Pollo Ahumado smoked chicken cannelloni, foie gras sauce, sherry reduction
I guess it’s not fair to give credit for “best dish” to the Ibérico ham, since the chef had nothing to do with how the pigs were raised or how the ham was cured.  On the other hand, the cannelloni had to have been the tastiest finger-lickin’ good dish of the night.  I’m not entirely sure if this is really Spanish, but we didn’t really care.  The foie gras sauce was sooooo money.  There had to have been truffle something in there because it had that crack-like addictive quality to it.  We split this into 4 bites, but next time I want a half or whole one to myself!  YUUUMMSS!! 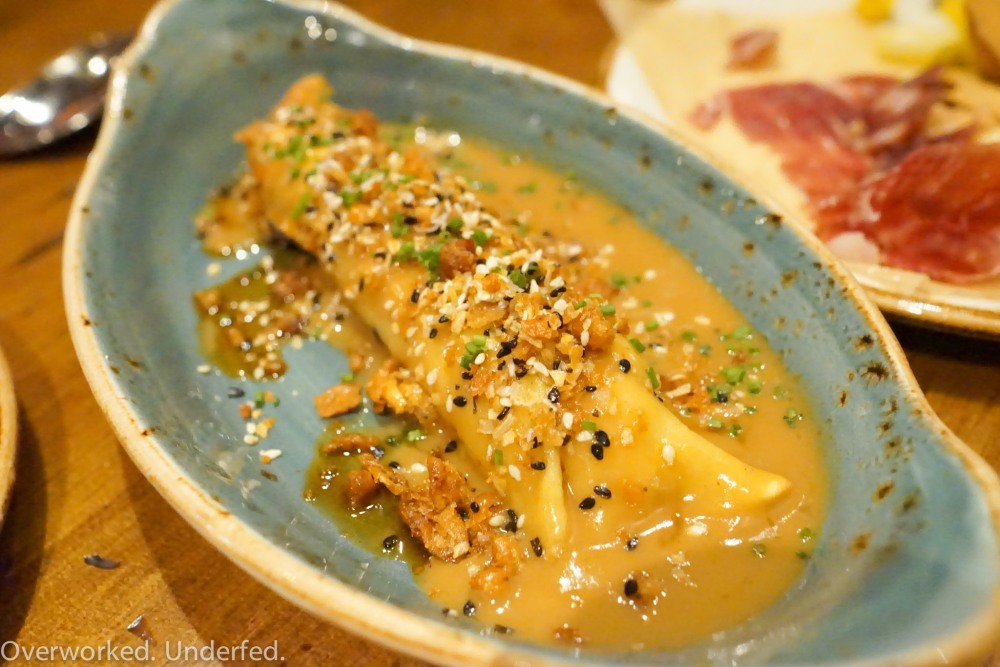 Esparragos Verdes grilled asparagus, romesco, almonds
The requisite vegetable dish.  We steered clear of the Brussels sprouts after hearing they were similar to the dish served at Broadway Bar.  These were smokey and tender, but I don’t think I’ve ever had a romesco sauce that I liked.  I guess I’m not a fan of that bellpepper essence.

Prime Skirt Steak 8oz
We entertained the 32 oz bone in rib eye steak, aged 50+ days.  Between 4 people, it didn’t sound like a massive amount of meat, but it would have limited our ability to sample so many other dishes.  We had to ditch the idea and go for a simple skirt steak.  This was also much better than the steak I had at Broadway Bar.  The char was intoxicating and the meat was tender. 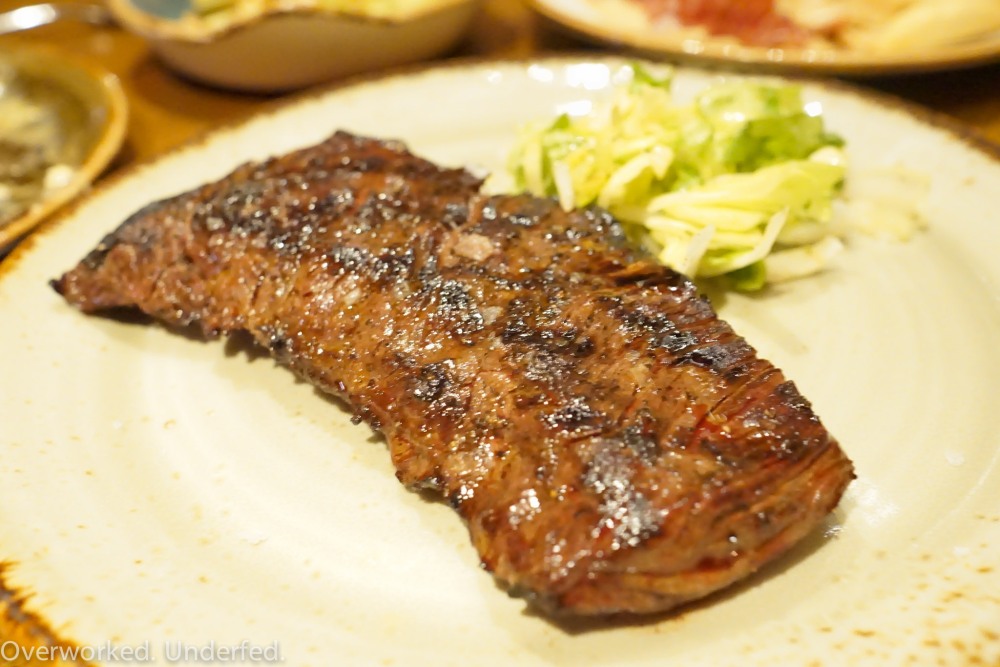 Rabo de Toro red wine braised beef oxtail, wild mushrooms
I didn’t get the biggest sampling of this one, but it tasted pretty standard for a braised meat dish.  Overload and Carnivorous Lush were not too impressed. 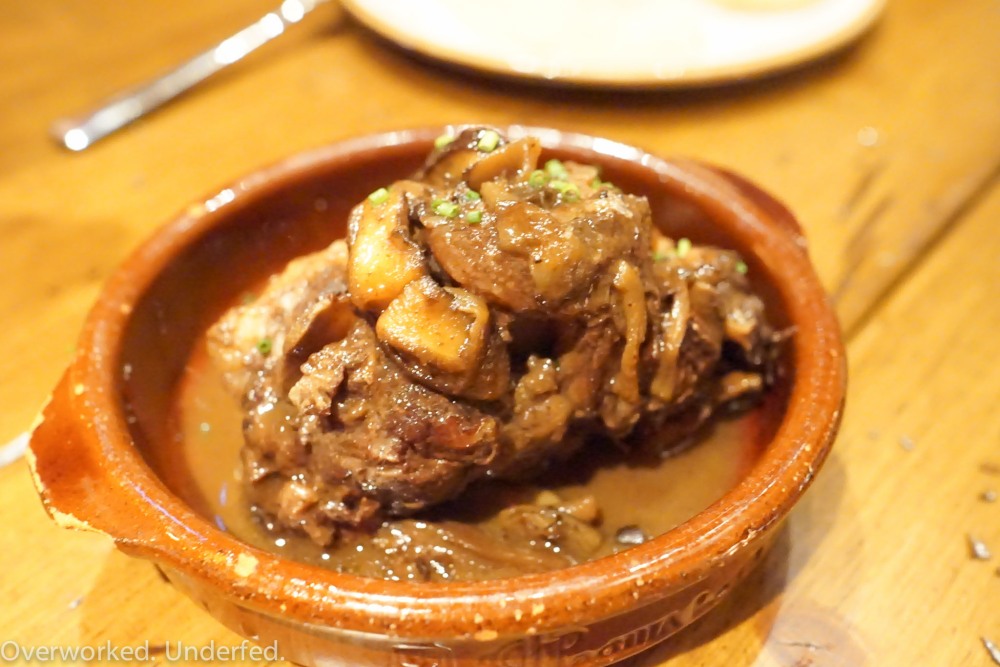 Bikini Sandwich paleta ibérico, manchego, truffles, panini
I didn’t think this was sandwich was going to amount to much given the strange name, but I was so wrong.  Chef Santana married some of the best ingredients on this planet with the Ibérico ham and truffles.  DAMN, that was a good frickin’ sandwich!  YUMS!

Bizcocho Tres Leches
We were full, but not super stuffed so of course we had room for not 1, but 2 desserts.  It doesn’t seem fit to end a Spanish or Latin meal without a tres leches cake, churros, and/or flan.  The cake was moist but not too wet and not too sweet.  The berries were a lovely addition. 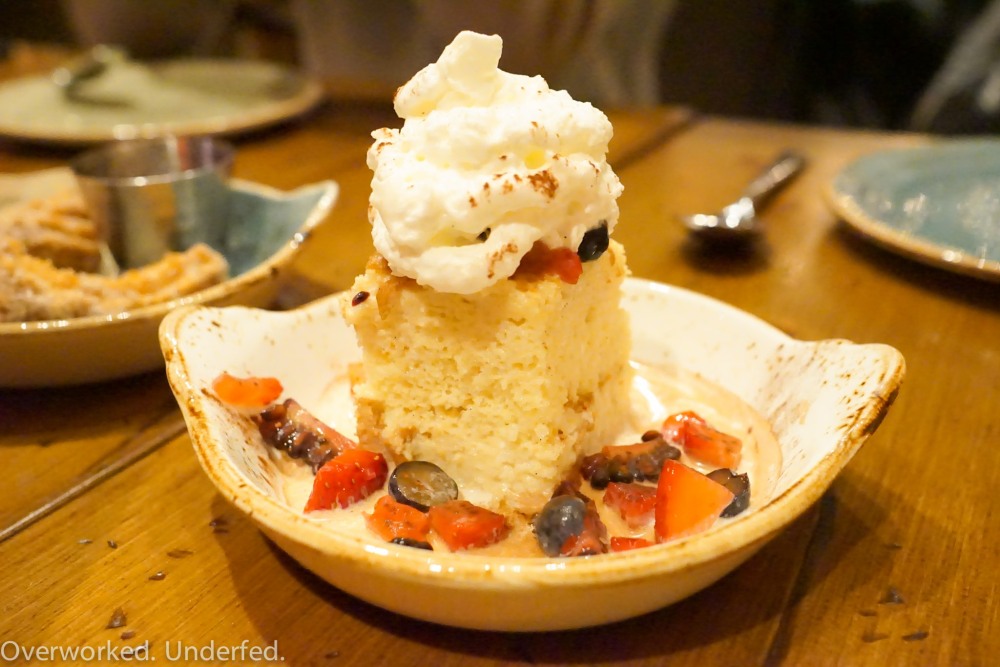 Churros
Obviously, a bit more free form and mutant shaped than your standard carnival offering.  They were delightly crispy on the outside with just enough softness on the inside.  The chocolate dipping sauce provided an extra layer of flavor.

We were all thoroughly pleased with the food at Vaca.  I knew Amar Santana had more talent than what was showcased at Broadway Bar.  This second restaurant did open after his stint on Top Chef so maybe he learned a thing or two and incorporated that into his cooking here.  Either way, it is safe to say I shall return to Vaca.  And since the menu is so extensive, I may be able to change things up and feel like it is my first time visiting the restaurant.  Maybe next time I’ll try to come with 6 people so I can get that darn rib eye steak.  One day, it shall be mine!