Skip to content
The South Bay is an upcoming foodie area.  It seems like there’s always something new and cool opening up.  I really liked Little Sister so I was excited to hear that the chef/owner was opening up a Mexican/seafood themed joint just down the coast in Hermosa Beach.  Who other than Smooth Obturator and Triple T, who call the South Bay their home, would accompany me to this very hip and happening spot?  I totally loved the ambiance.  It was both relaxed/laid back given its beachside location, but then also vibrant, hip, and happening.
Oysters
I was a little bummed these were cooked instead of chilled.  I’m not sure why cooked oysters just never taste right. 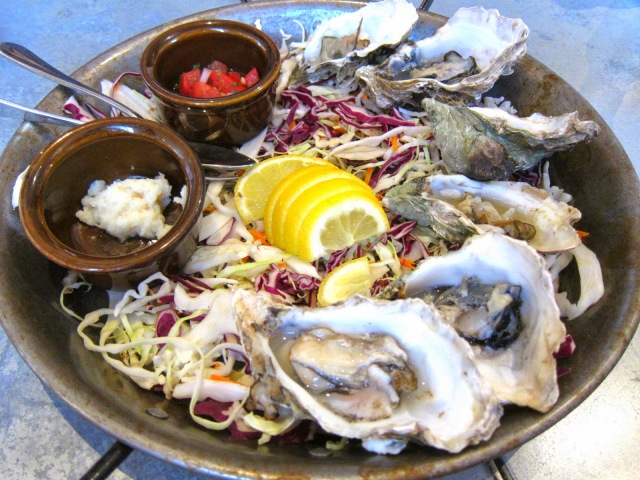 I don’t think it’s fair to list uni as a main ingredient here.  There was only 1 little lobe of uni!  Other than that, the dish was fine but nothing spectacular.  The fresh passionfruit was a nice touch.

This was definitely my favorite appetizer.  It was so rich being on a crispy just fried tostada chip.

Smooth Obturator really liked this the best.  Who knew you could grill lettuce and impart such a smokiness to it.  We tried recreating this at home but obviously weren’t as successful.  I think this has to be cooked on charcoal or use a smoker to get more flavor on it.

These were some sad ass scallops.  Don’t they just look like it?  Not enough char.  Flavorless mole.  Side salad lacking punch.  Bland corn goop.

I was also expecting more punch with this mole.  It was just OK.  Of course Triple T was not a fan of all the porky fattiness.

This was my favorite dish of the night.  The shrimp were big, fresh, sweet.  The flavors were spot on. It reminded me of a Mexican bouillabaisse with just shrimp, which are my favorite seafood.  The fried beans and rice were sad and lacked enough flavor though.  The pickled veggies were a nice touch but weren’t pickley enough.  So basically the main part of this dish was delicious enough to make up for the less than spectacular accoutrements. 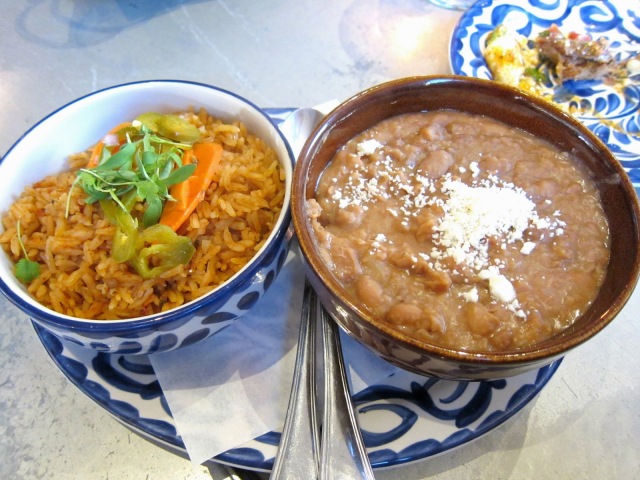 The desserts were just OK.  I feel like I could make a much better ice cream sandwich than this one.  The cookie was just so generic tasting.

This was also another unmemorable dessert.  The candied hazelnuts on top were a nice touch.

So I’d say the food at Dia de Campo did not meet my expectations, which were high due to my previous visits at Little Sister.  Since the chef is Asian, maybe it’s easier for him to recreate/reinvent Asian flavors than it is for him to work with Mexican flavors?  The flavors of Little Sister delivered the  punch that I felt was lacking here.  There were definitely some successes like the tostada and shrimp boil, so I would certainly come back to try other things.  And I just liked the beachy, relaxed, but upscale-ish scene.  Smooth Obturator is a fan of this place over Little Sister.  He’s a harsher critic of Asian things since he obviously knows how Asian foods should taste over Mexican things.  Either way, I think its a good addition to the South Bay.