I almost make it a point NOT to go to a restaurant’s soft opening.  I don’t want or need to be anyone’s guinea pig, especially if its on my dime.  Free food for my invaluable feedback? Now we’re talking!  I can’t say I was duped into going to Mix Mix.  Teety suggested it, and I just went with it.  Sometimes it’s nice not to have to do all the thinking when it comes time to choose what and where to eat.  My food brain enjoys the little vacation every once in a while.  None of us, Teety and Soprano Man included, knew we were dining during their soft opening.  The slow to start service and empty tables should have been the tip off.  Either way, my expectations were low for what Yelp described as “Filipino, French” food.  It’s not everyday I see those 2 cuisines in one sentence, let alone, one restaurant.  The website elaborates a bit more, describing the food as “eclectic and globally inspired” with influences from French, Italian, and Filipino cuisines.  Chef Ross Pangilinan hails from Leatherby’s Cafe Rouge, a Patina Group restaurant, so it’s not like he was flippin’ patties at McDonald’s.

Pork Cracklings
After waiting a good long while to get our order in and get some water for the table, these snackable delights finally arrived.  It was certainly a welcome change from your standard bread & butter.  Crunchy, sinful, with a light sprinkle of five spice powder-ish flavors. 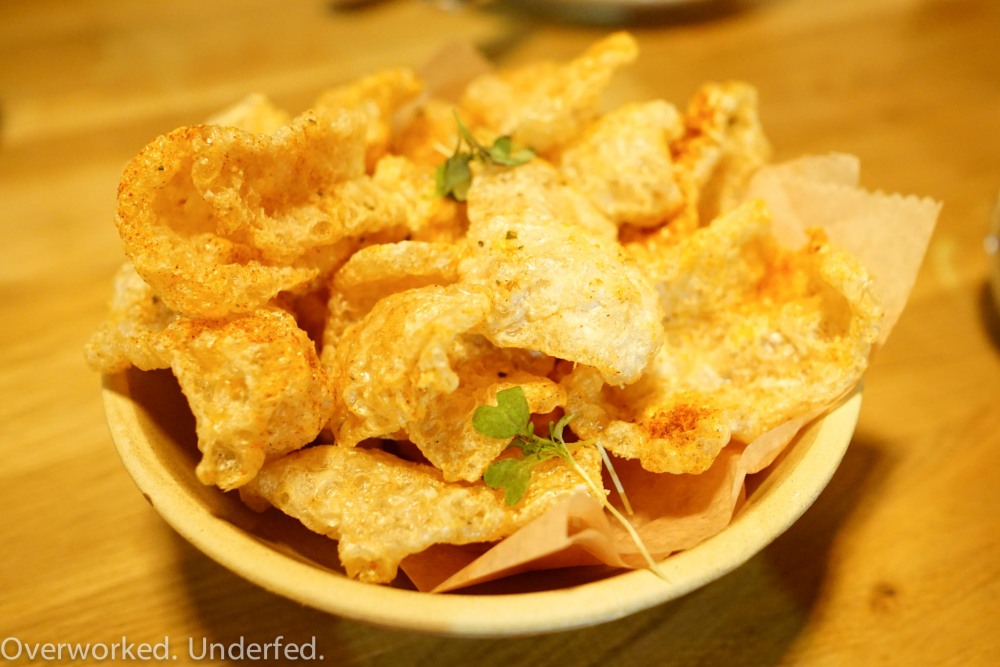 Deviled Egg salmon, cracklings, pickled onion
I’m not a fan of deviled eggs because I don’t like the taste of cooked egg yolks, but this might be my favorite version yet.  It did not taste eggy at all, just creamy and balanced by the salty salmon, crunchy cracklings, and hit of acid from the sweet sour onions.  Soprano Man is a huge fan of deviled eggs and he felt the filling was a tad grainy, but he still enjoyed the flavors. 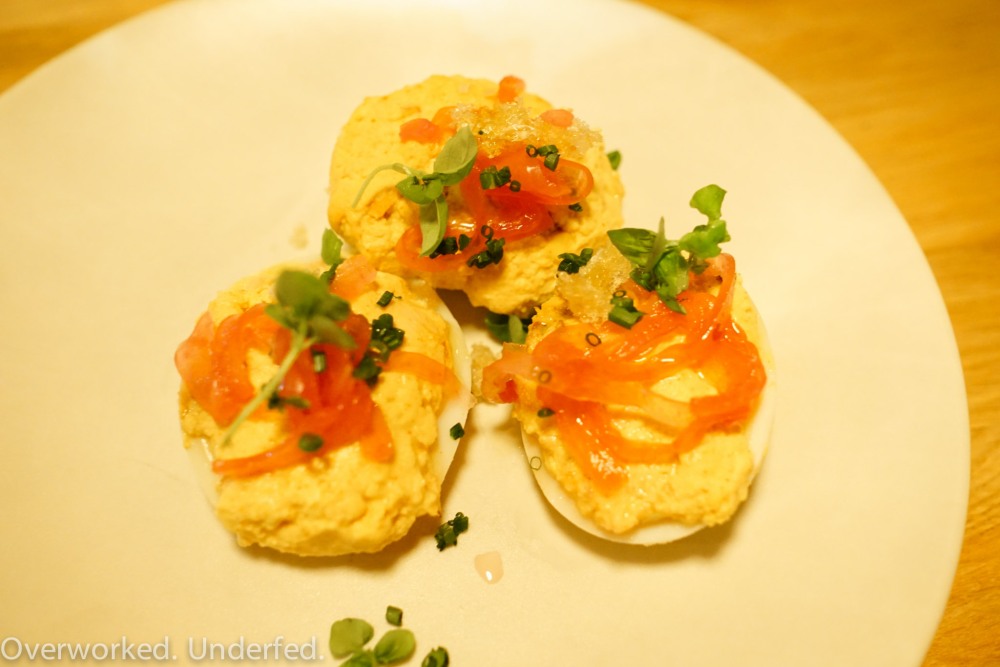 Albacore Tostada orange pepper, siracha mayo, ginger soy, cilantro, guacamole
Soprano Man doesn’t partake in food of the uncooked variety.  Teety and I thought this was another well balanced bite.  Every component thoughtfully contributed to another well balanced bite, not just in flavor, but also in texture.  The crunchy tostada, the meaty albacore, the juicy oranges, creamy avocado.  YUMS! 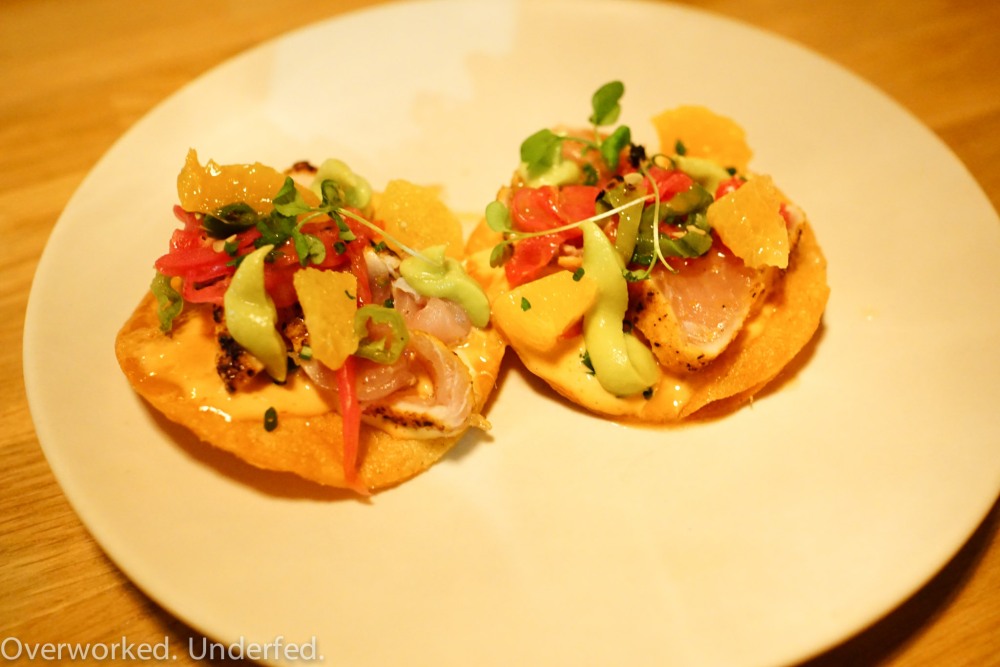 Cheese Steak Fries belgium style fries, house made cheese whiz, oxtail
It was kind of hard to believe that anything “cheese whiz” would make it to the menu of any respectable food establishment these days.  But, it is 2016, and anything old and/or weird always seems to be popular among the hipsters.  I don’t know what “belgium style” means, but to us it meant “disappointingly soggy fries.”  The oxtail, but not the cheese whiz, was one component of the dish that I quite enjoyed.  I just wished there were more of it.  I hope this dish gets tweaked or removed from the menu. 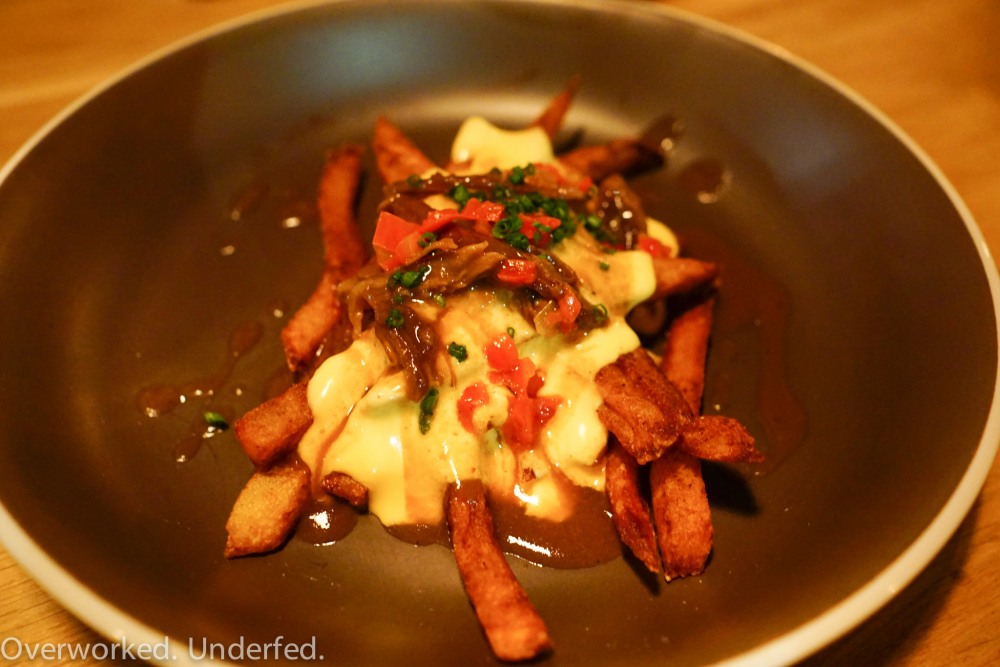 Chorizo and Pork Croquettes jalapeño lime aioli
Never underestimate a fried ball of meat and potatoes.  These were delicious.  Perfectly crispy and crunchy on the outside, while moist and packed with flavor on the inside.  Another well made bite.  YUMS! 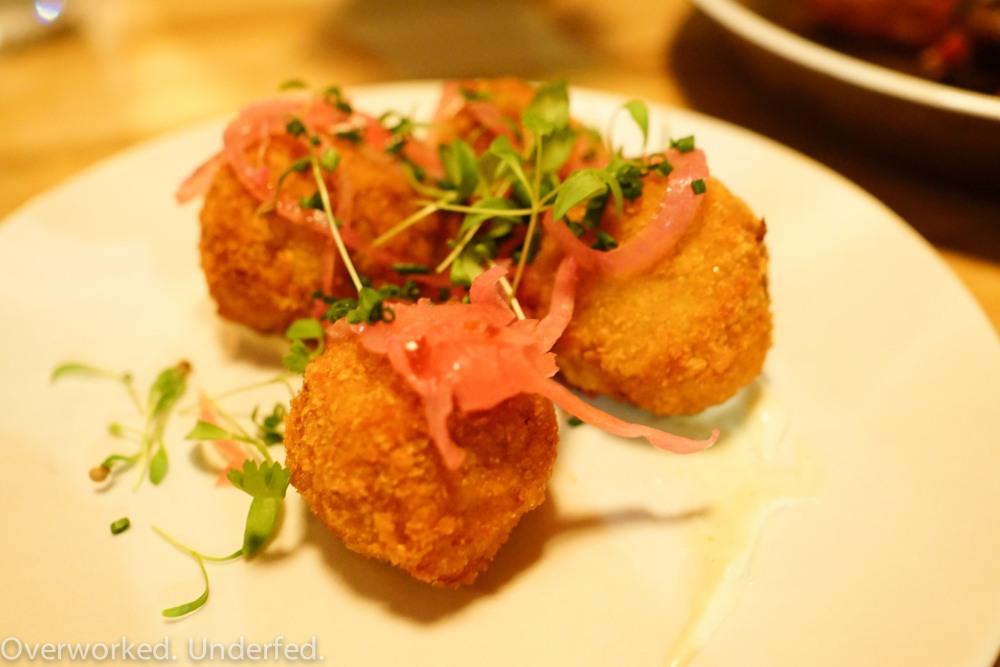 House Made Pasta pappardelle, bolognese, mushrooms, parmesan
So by this point, I could see that the food here isn’t really a fusion of global flavors, so much as it is a collection of random dishes from around the globe.  I’m not quite sure where the chef had us with the other dishes, but the pappardelle was undoubtedly Italian.  Unfortunately, the chef needs to work on his Italian food skills.  The pasta was far too soft for me.  The bolognese was noticeably under seasoned.  Honestly, a very “meh” attempt at pasta. 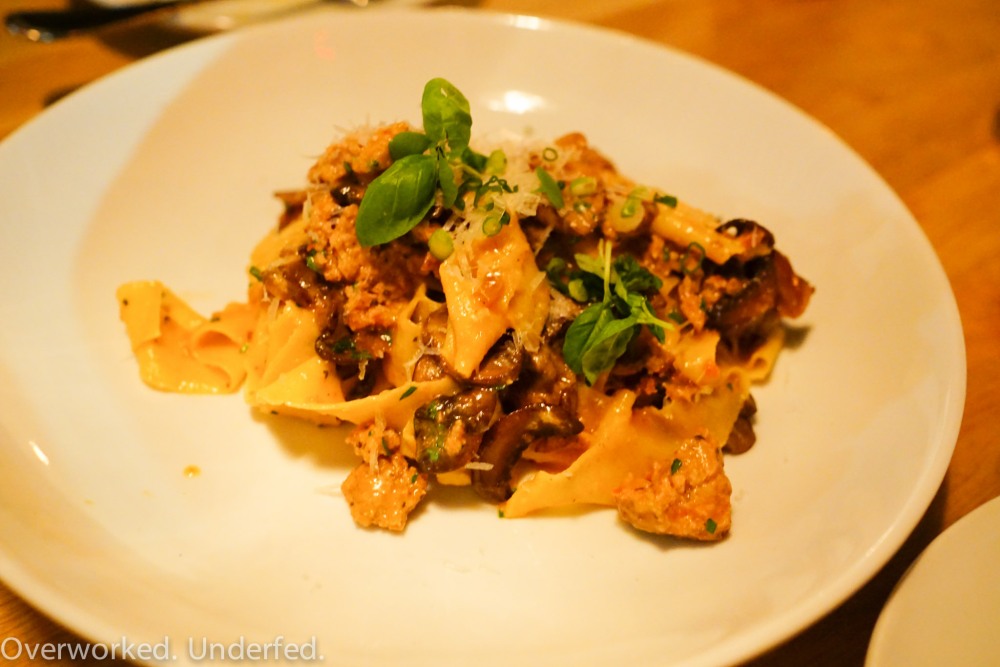 Hanger Steak loaded potato espuma, shallot marmalade, peppercorn sauce
The chef certainly made up for the pasta with this impeccable hanger steak.  It was a perfect medium rare with just the right amount of seasoning.  The espuma was an ultra smooth and creamy mashed potatoes.  The best part was the shallot marmalade.  I wish I could slather that on everything.  YUMS!! 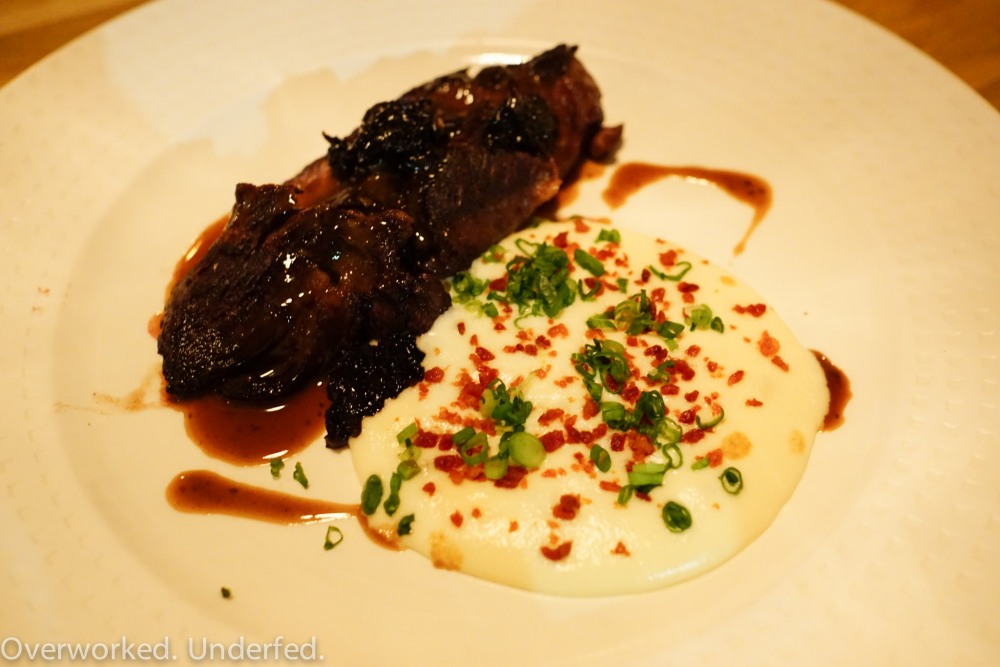 Filipino Ceviche yellow fin tuna, coconut lime, avocado, pork cracklings, thai chile
Another dish that Soprano Man skipped, but Teety and I thoroughly enjoyed.  The flavors were balanced and on point.  It hit that acid note, but not overwhelmingly so like some Peruvian ceviches.  The tuna was a bit soft in texture, but maybe that was the result of the “cooking” process.  All in all, another successful dish. 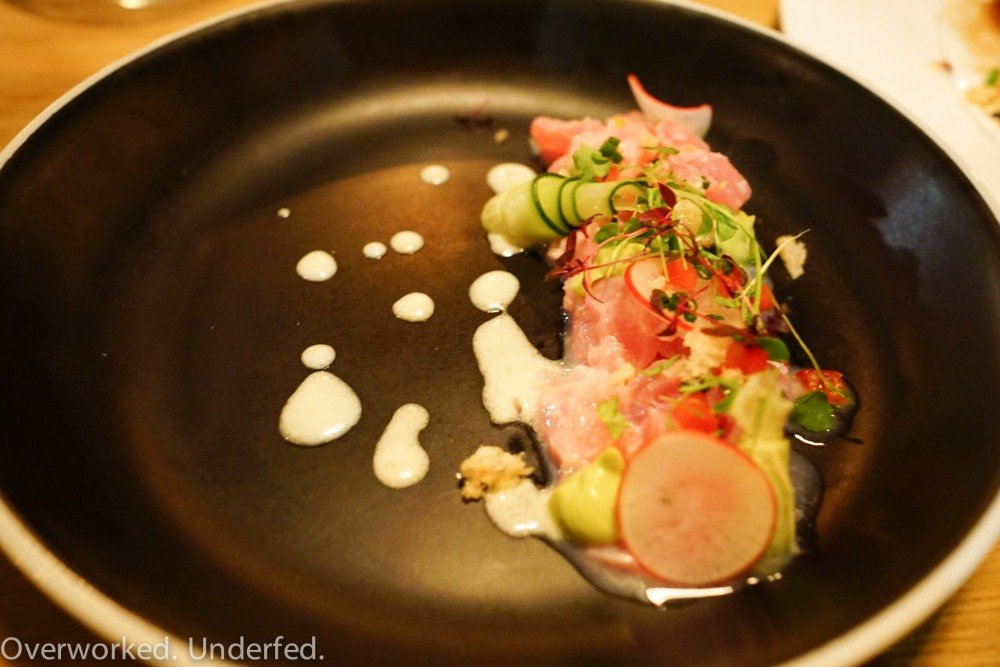 Soft Egg Raviolo herb ricotta, black pepper pasta, guanciale, parmesan, brown butter
I don’t know how such an amazing raviolo came from the same guy who made the pappardelle.  The pasta was al dente.  The filling was ooey gooey rich and delicious.  Soprano Man felt splitting one raviolo 3 ways was the way to go because it would have been too heavy otherwise.  I don’t know if I necessarily agree, because I could have eaten more.  It was pretty good.

Crispy Duck Leg mushroom risotto, blackberries, szechuan pepper, cider jus
I can’t say I’ve had a lot of great duck dishes.  This dish was a last minute addition, when our greedy inner fat man took control of the ordering.  I liked the presentation with the perfectly frenched duck legs.  Bravo for serving 2 meaty duck legs, when most other restaurants would probably just serve 1.  Unfortunately, the meat was a tad on the dry side for me but Soprano Man enjoyed it.  Applying Tom Colicchio’s Top Chef standard for risotto, I would say this one missed the mark.  Risotto has to be runnier, and it has to spread when it hits the plate.  While perfectly seasoned and creamy, the texture of the risotto leaned a bit goopier and thick.  It doesn’t sound appealing, but it was still very tasty.  The Asian flavors were definitely more noticeable here, but I wasn’t able to pinpoint the source, though likely the delicious sauce. 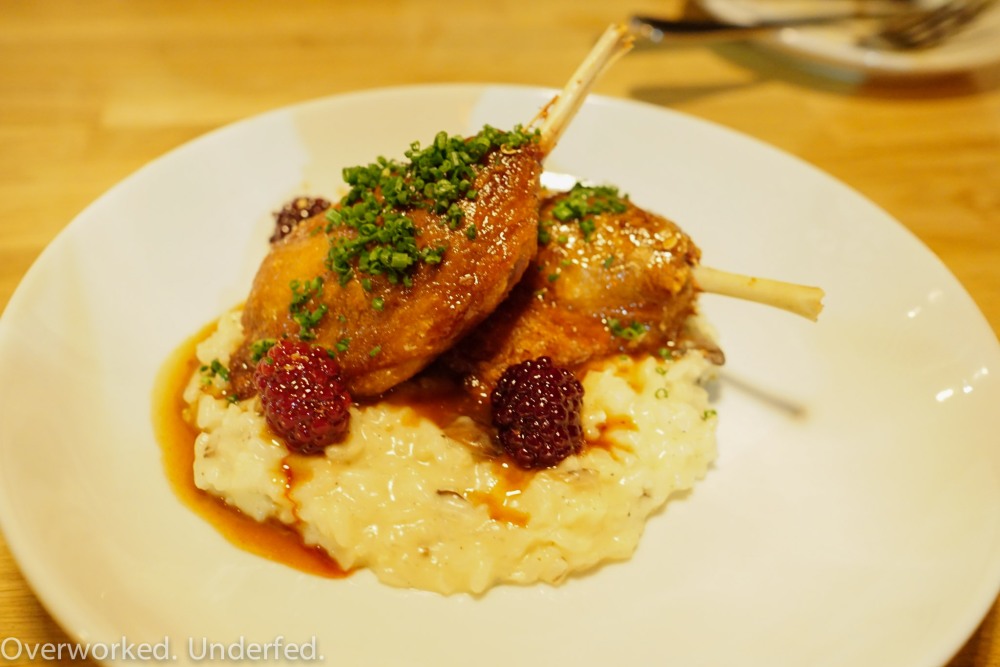 Beef & Pork Meatballs cheesy polenta, pomodoro sauce, basil
The progression of the meal was definitely out of whack.  Small plates followed big plates.  Light dishes sometimes came after heavier dishes.  We asked them to course it out for us, but I guess things just came out as they were made.  After so many good dishes, I was doubtful things would end on as strong a note with the meatballs.  I was right.  From these average meatballs, and polenta that was too runny and bland, I can say that Italian food is not the chef’s strong suite. 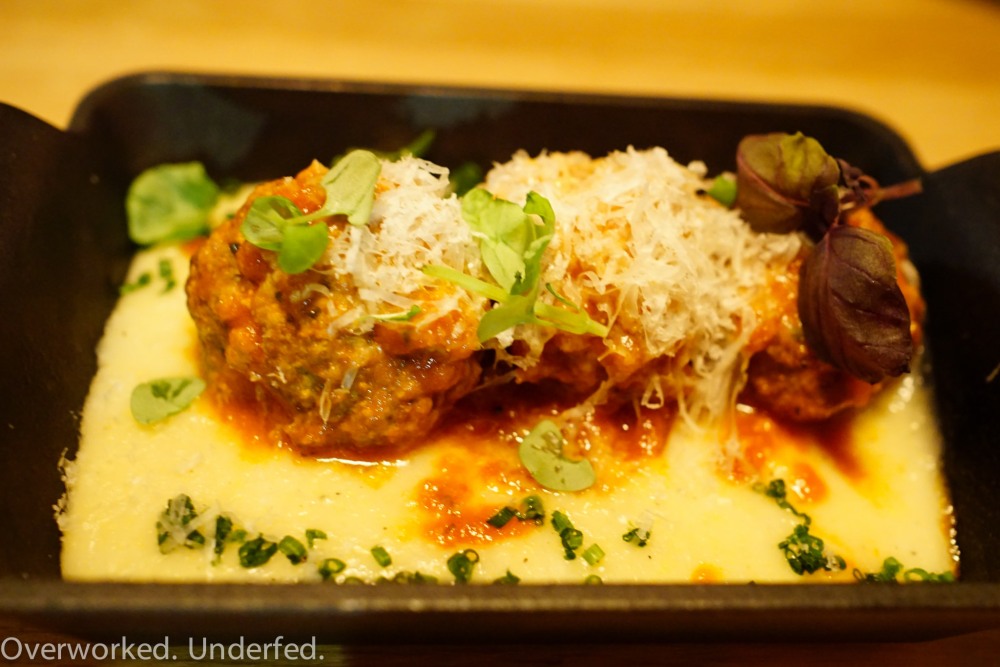 Tropical Verrine lychee, passion fruit, coconut, macadamia nuts
We opted for both desserts.  This lighter fruitier panna cotta like concoction was a hit with Teety.  It was beautifully presented and I could not find fault in the flavors. 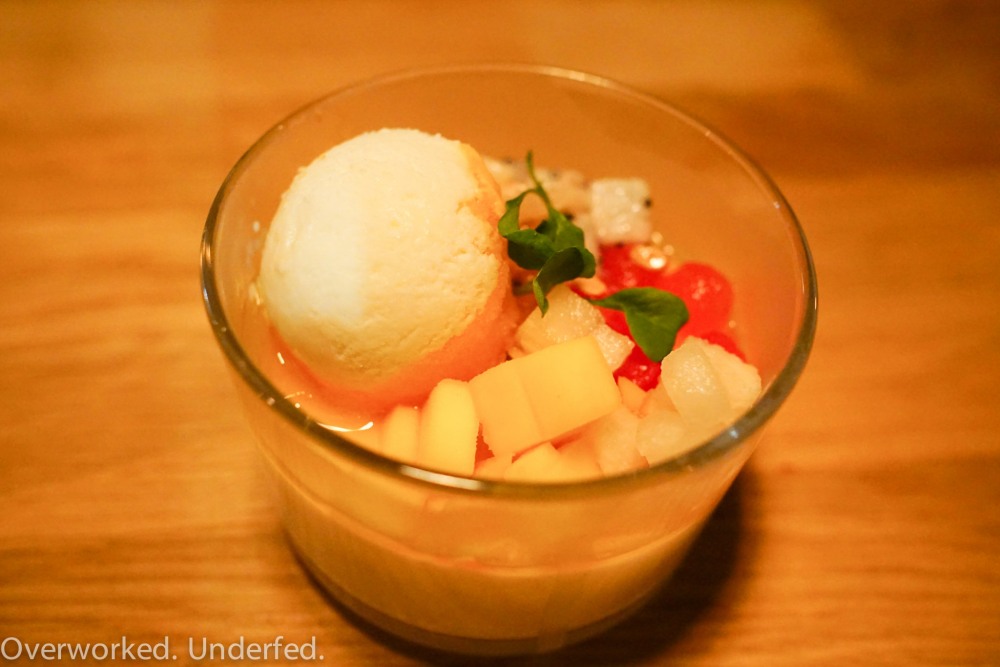 Chocolate Tiramisu espresso, cocoa nibs, chocolate pearls, hazelnuts
Soprano Man and I enjoyed the heavier dessert of chocolate and espresso.  The top layers of this tiramisu were delicious, but the bottom cake layers were too dry.  The creamy mascarpone component was not too sweet.  I enjoyed the chocolate pearls the most. 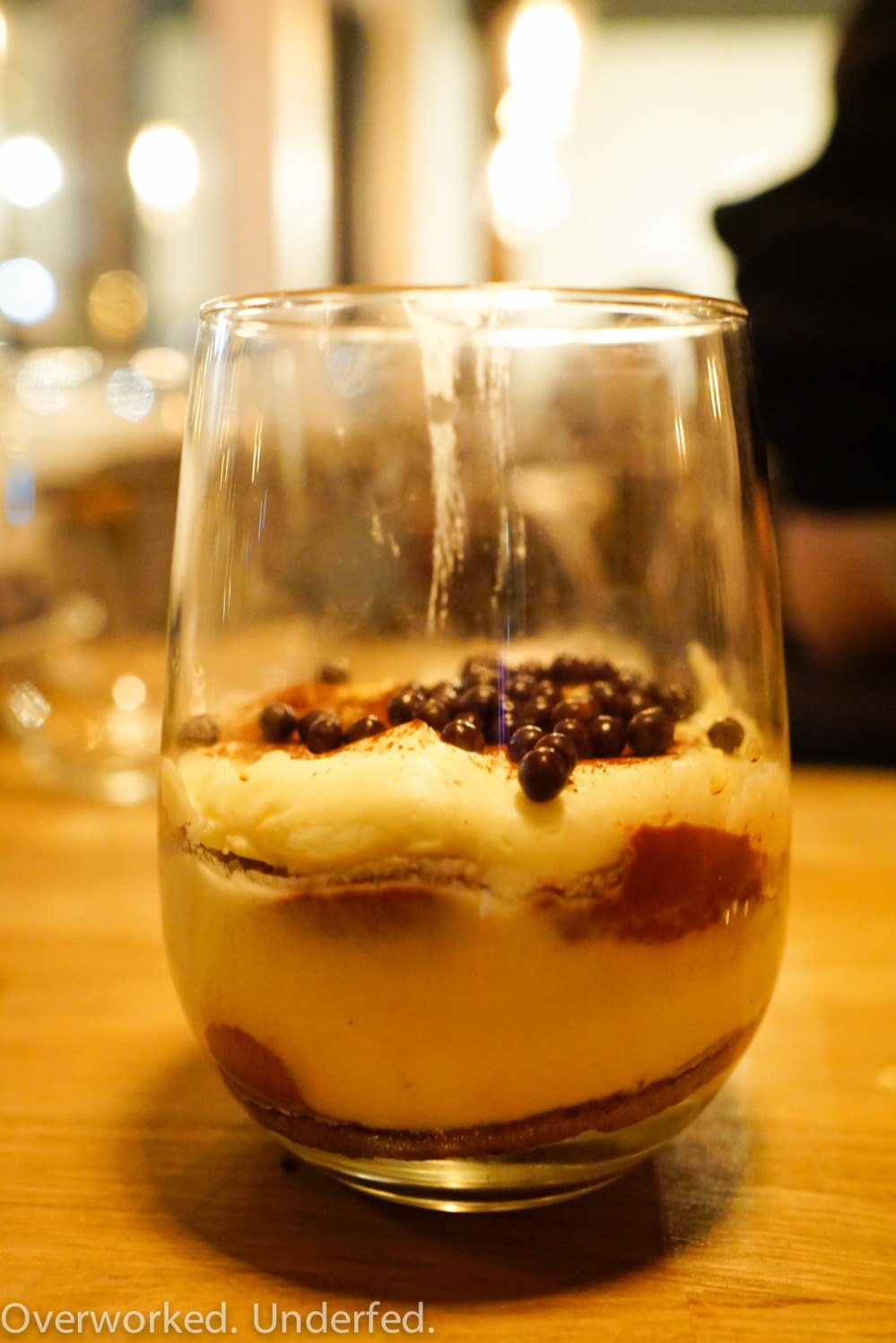 Mix Mix was an unexpected and unanimous delight.  Service did pick up and the food came out pretty quickly.  I wouldn’t have minded an extra 5 minutes in between each dish, but I’m just being nitpicky.  The food was mostly hits, with a few misses with the cheese steak fries, pappardelle, and meatballs.  I can maybe let the duck slide, but I’m sure other people are going to find fault with it.  It’s a little jarring eating food that seems to lack a focus, other than bringing a little bit of everything from different parts of the world.  But that may be what they are going for here.  After all, the place is called Mix Mix.   I really hope Mix Mix can weather through the bad juju that is obviously looming over this spot in Santa Ana.  Two other restaurants had folded before it became Mix Mix.  In the end, they are delivering some good eats that doesn’t cost an arm and a leg.  I will certainly return to Mix Mix in a few months after all the kinks have been worked out.