I have been wanting to try Tasty n Sons very a long time now.  It’s an extremely popular brunch place, but the wait can be ridiculous.  There dinner service is supposed to be pretty good too, so I made this my final birthday dinner destination.

I guess I was imagining a ceviche, but instead found myself with shrimp and octopus doused in cocktail sauce.  I’m not sure what was “neuve” about this.  The flatbread? The saltine crackers?  Major disappointment here. 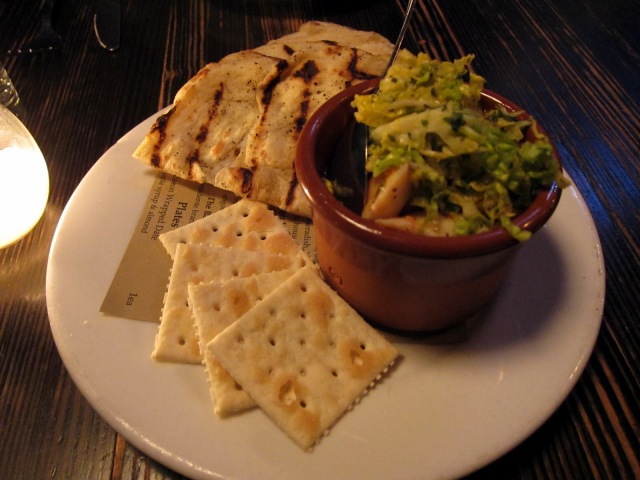 Another underwhelming plate of food.  Despite all the pretty contrasting colors, this was bland and unexciting.

Now we’re getting somewhere!  I don’t think I’ve ever had lamb chops done in a Korean style like this.  It was finger lickin’ good.  The kimchi was a horrid offense to the Korean cuisine though.  I swear it was spiced with Sambal chili sauce, majorly wrong.

Dumpling Man is a totally asian-phile.  He just likes to eat Asian food, so even at this very American, very Portland inspired restaurant, he had to go for the Asian stuff.  The previous dish was really good, and this was similar in approach but the meat wasn’t as tasty.  I don’t think I’ve ever had adobo, but I imagine this was probably similar.  It was just a bit dry.  Again, there was the offensive kimchi, and the rice was dry and hard. 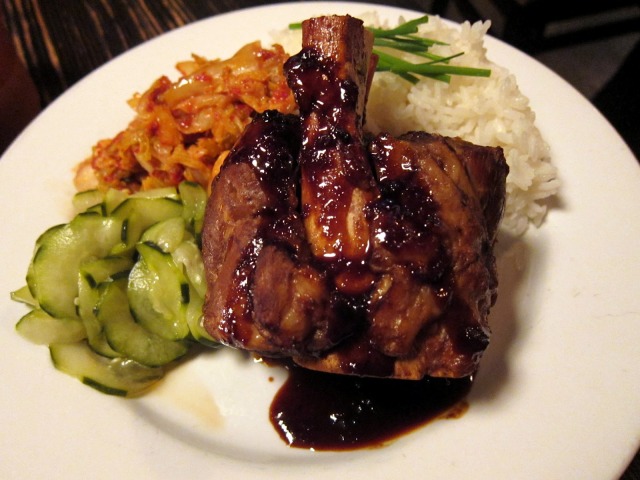 This is apparently a really popular brunch item.  Dumpling Man says Tasty n Sons will take anything and put eggs and top and call it brunch fare.  This is probably true because there was nothing breakfast-y about this aside from the eggs.  It was tomato-y which I always appreciate, and not like anything I’ve ever had.  There was nothing particularly wrong about this dish, but it just didn’t wow me.

I was a bit disappointed by the dinner at Tasty n Sons, but I guess it’s better known for its brunch.  Stay tuned because the brunch post is coming soon!