So Dumpling Man and I have tried almost all the big name fancy restaurants in Portland, but there was just one left, Le Pigeon.  I can’t say I had high expectations because it’s more casual sister restaurant, Little Bird, was just ok and Dumpling Man had already tried Le Pigeon and was not impressed.  However, the executive chef/owner, Gabriel Rucker was awarded the 2011 James Beard Rising Star Chef award for his work at Le Pigeon so that’s saying something.

Despite being on their “I’m a Skinny Bitch” diet, Zhu Zhu Hamster and Little Pet happily joined us here for another birthday celebration dinner in my honor.  They stayed true to their diet and only ordered 1 appetizer and 1 entree TO SHARE.  I felt like a fat ass for just 2 seconds when I ordered my appetizer and entree and eagerly approved of Dumpling Man’s 2 choices too.

Our dining companions seemed to enjoy this. 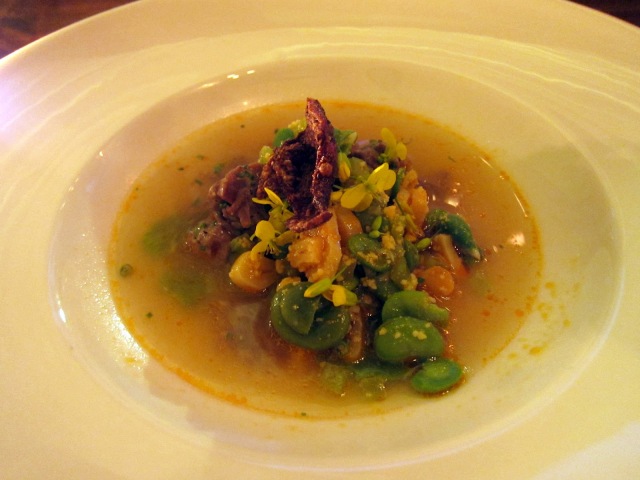 Dumpling Man cannot help himself when it comes to beets.  He just has to have them, no questions asked. 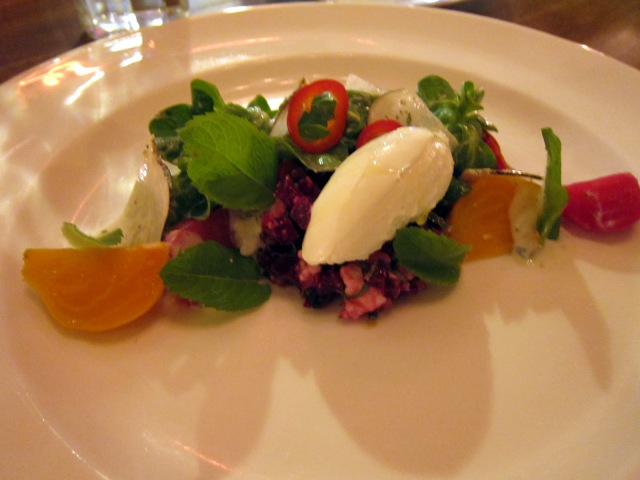 This was my choice of appetizer and it was soooo delicious!  Granted the size of the clam shells was misleading to the amount of clam meat represented in the dish, but all the other ingredients made for something spectacular.  It was like a warm salad of hearty potatoes, asparagus, and salty clams and guanciale topped with some pickled red onions.  Two thumbs up here.

Fresh Fish of the Day

Sorry for the blur =(  It was a good dish I think.

Just like the clams, this was another dish that was packed with flavor.  The lobster definitely kicked what would normally be a boring chicken dish.  The morel cream was finger lickin’ good.

The gnudi were pretty large, but plump and soft.  They had a nice herby-ness to them and I loved the sweet peas and carrots.  The simplicity and execution was spot on.

These seemed to be pretty popular signature dessert.  They were disappointing.  The profiterole was a tad stale.  The foie gras filling was pretty subtle.  The caramel sauce tasted like pure sugar. 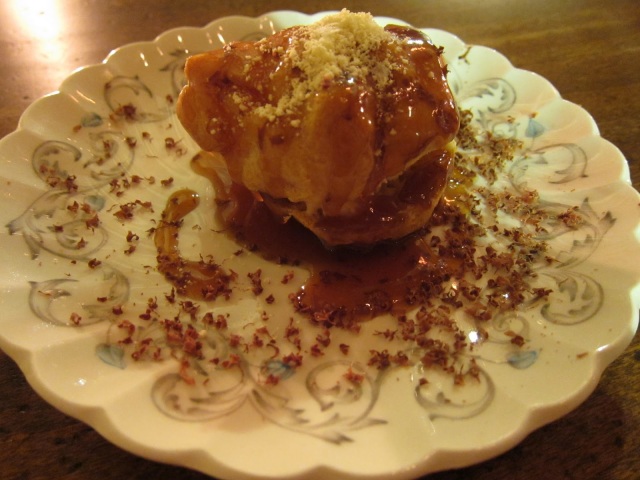 This dessert fared just a little bit better, but had that same tasteless sugary sweetness drizzled on top.  The waffle had notable bacon smokiness.  It wasn’t as fluffy as I had hoped.

Overall the food was very good.  I can’t say I’ve had anything like it anywhere it else.  It was French, but I would say there is a little bit of a Northwest inspiration going on here.  I would certainly come back to Le Pigeon again, and probably go for the tasting menu next time.  There were just so many other delicious things on the menu.  I might have to skip dessert though.  Still though, the place is a few steps above Little Bird, but I can see how it is in the same vein.  The restaurant is damn small and we actually had to share a table with another party.  So if you come here, but sure to make a reservation.
Le Pigeon
738 E. Burnside
Portland, OR 97214