On this foodie journey, my old roomie and I planned to chase down Kogi and Marked5. Marked5 you ask? It’s like japanese burgers on rice buns. That’s about the extent of my knowledge. First stop Kogi. Luckily we got there just as it parked and started setting up, so the line wasn’t bad at all. 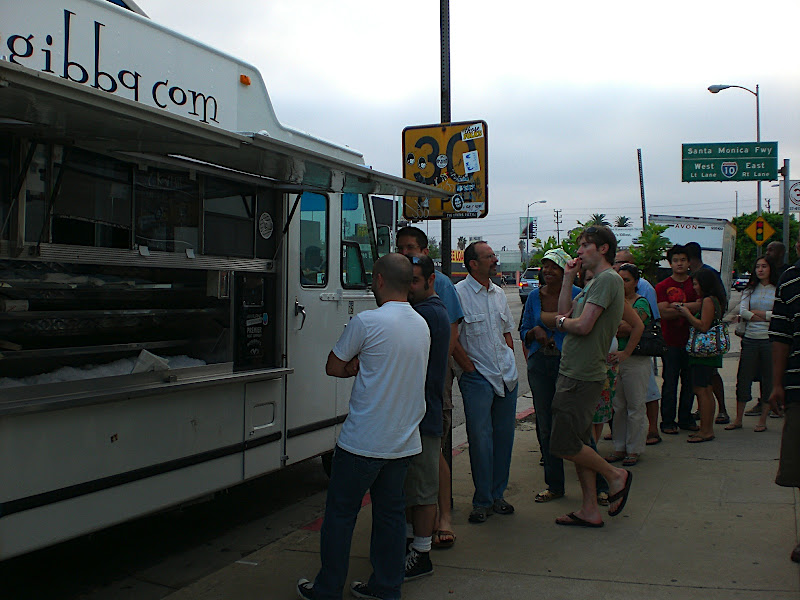 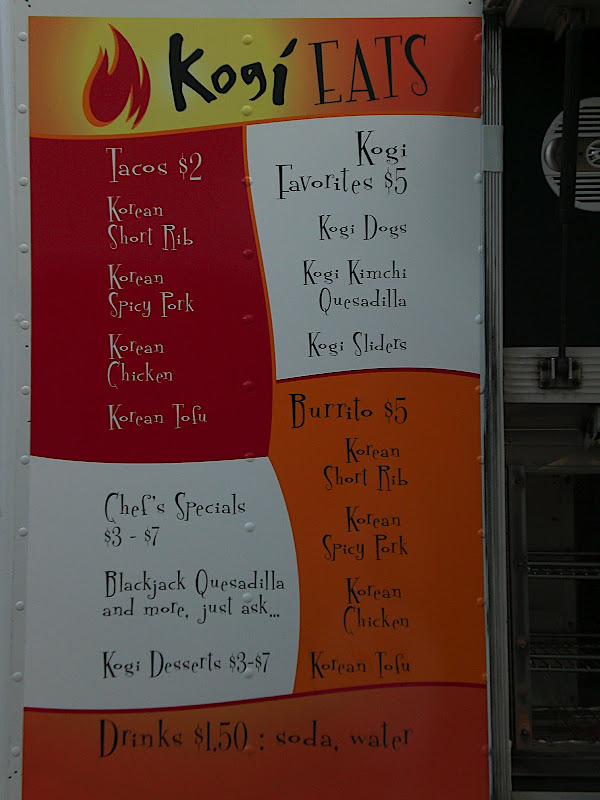 My roomate and I weren’t sure of what to get and of how much to get. Especially since we planned on eating more at our 2nd stop, Marked5, we wanted to plan appropriately so as not to overeat. We got 2 tacos each. 1 beef, 1 pork for me and 1 beef, 1 tofu for old roomie. We were concerned that that might not be enough and that if we wanted more we would be stuck in a longass line. So we also got sliders to split. 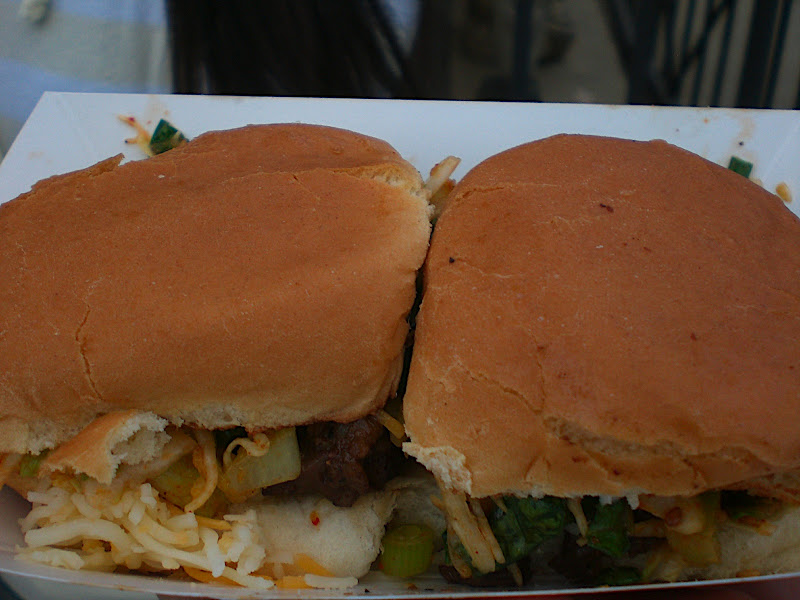 I chomped on the sliders first. The flavors were immediately mouthwatering, and my first thought was like “All the hype is true! This stuff is well worth the wait!” Well-marinated beef and a perfectly complimenting veggie/salad toppings. After a while, the bun became soggy and didn’t seem to compliment the filling as well. So I moved onto to the tacos. 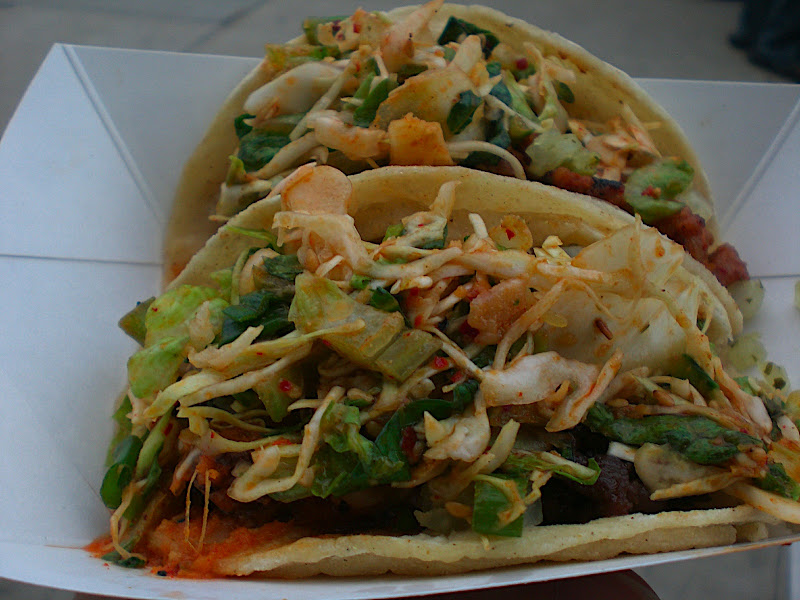 What was in the slider was the same thing in the taco. Also delicious! I’ve heard complaints that it all tastes the same. Different meats that are masked in the same flavors since all are slathered in the same sauce with the same veggie toppings. Point well taken. Stuff still tastes good tho! Again after a while i got sick of the taco and just ate the filling and I began thinking to myself. Gosh this would all taste great with some rice! Haha. Maybe next time I’ll sneak over my own rice and dump out the filling onto my own rice. 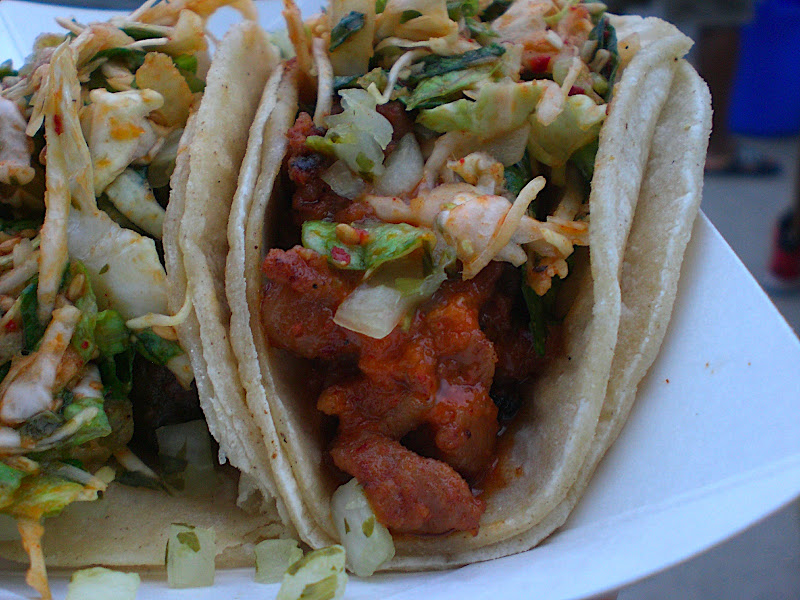 So old roomie had read on their website that they have some special dessert, called chocolate tres leches. I was unimpressed by the appearance. It looked sooooo homemade and sorta suspicious. Wrapped in plastic in a tin foil cup. It was really good tho. Like a chocolate cake I’ve never had. I can’t even describe what about it was different. Certainly the topping of “spiced peanut brittle with toffee, cocoa pebbles, cinnamon toast crunch” was good. You wouldn’t really know there was cereal in there. There was also some creamy center with some tapioca balls which was a little weird but really didn’t add or detract from the overall deliciousness. I think that makes it the tres leches, but my favorite part is the cake. And it’s all yours for $4. 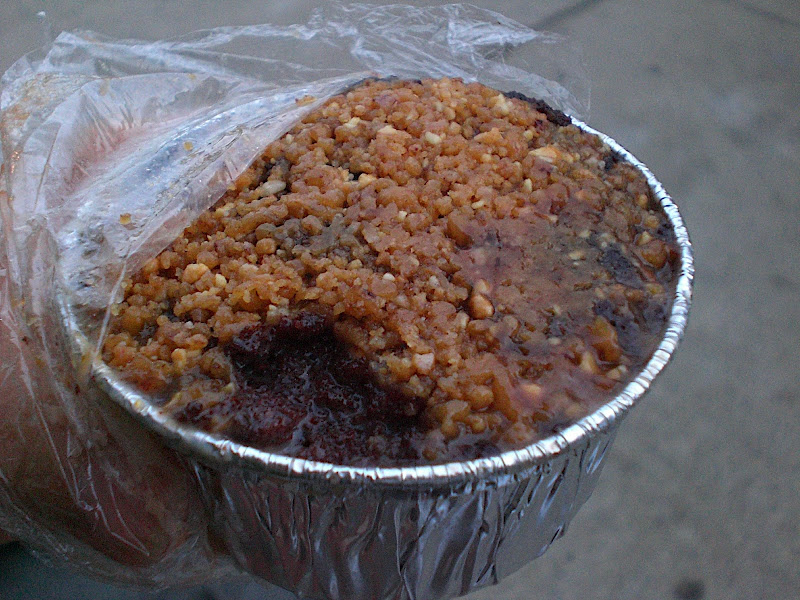 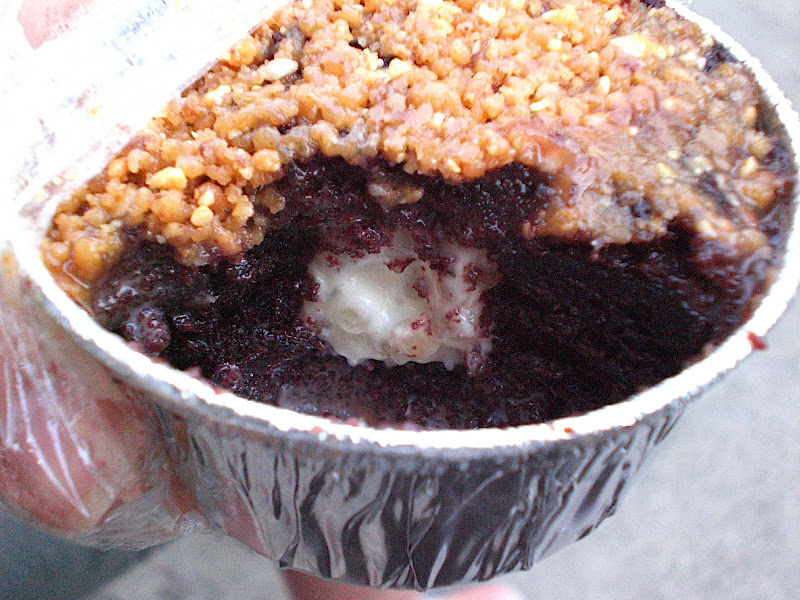 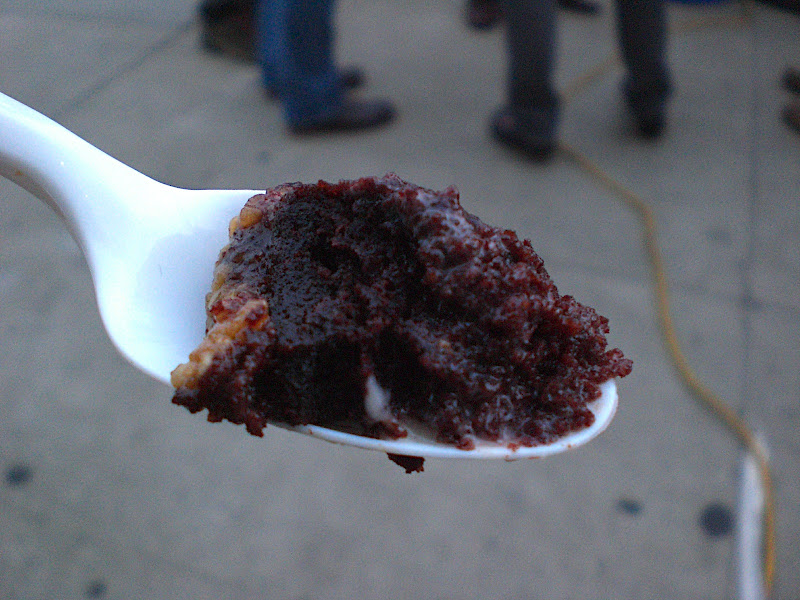 Anyways, you won’t be seeing pics from Marked5 cuz those bastards up and moved from their posted/planned location. My poor friends who I was gonna meet up with even got there before I did and had to break the news that there was no such Marked5 truck at the Venice location. Instead they were over by Robertson and Olympic. I was disappointed and this caused our food truck chase to come an abrupt end. It probably was for the better since old roomie and I were pretty full from all the Kogi-ness. Ironically I did see the Marked5 truck on my way back home and was tempted to stop but I was angry they ruined my plans and didn’t want to give them any business for the night. They looked pretty empty anyways. Anyways, there’s always a next time!