Big Spoon has been raving about DOC for sometime, so finally there was an occasion to celebrate.  I took Dumpling Man here for his birthday.  We were quite surprised by the “quaint” or “humble” design of the restaurant, which feels more like you’re eating in someone’s house.  Walking into the restaurant puts you immediately in the kitchen of the restaurant.  It’s a really awkward feeling because you feel like you’re in their way.  Burners and ovens on one side, prep and counter space on the other.  Walking 8 feet further puts you into the dining space.  Seriously, there’s only like 10 tables, so max capacity is like under 50 for sure.  For some reason, the way Big Spoon was raving, I thought this was gonna be an elegant upscale fine dining experience.  It was more like humble, solid, delicious.  We opted for the tasting menu, which ended up being SO much food.  I don’t think it was tasting portion sizes, so for just $60, it was a fantastic deal.  We got 1 wine pairing which they so graciously split for us with 2 different wines with each course, just half pours each time.  It was a pleasant surprise to say the least.  I guess they understand people like to share and taste as much as possible and they really facilitate this.

Pretty standard.  The olives were salty and oily.  I dunno why people like olives, they’re just ok to me. 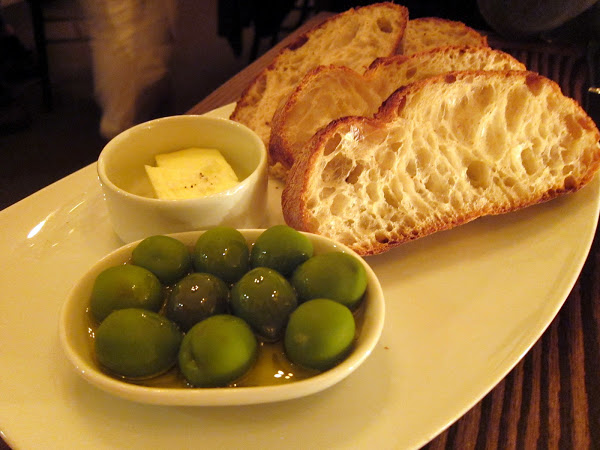 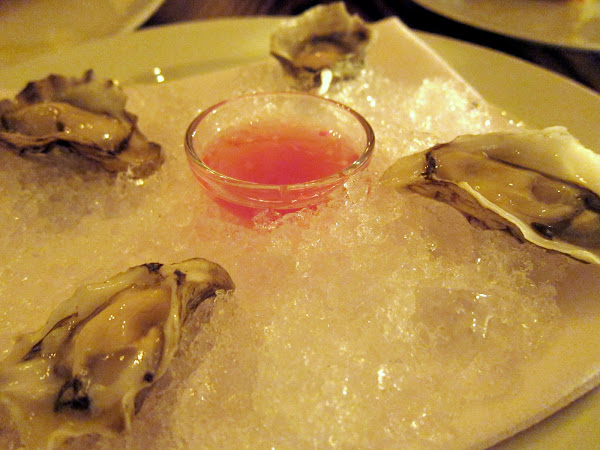 I guess this was like a kale salad, a pretty hearty one at that with the addition of the potatoes and all those nuts.  The key to a great salad is texture, lots of varying textures.  The kale was cooked just a bit and tossed with what was probably a pretty simple vinaigrette.  I will have to ding them for oversalting the dish just a tad, but I appreciated the originality here.  I’d order it again and hope they weren’t too heavy handed with the salt again. 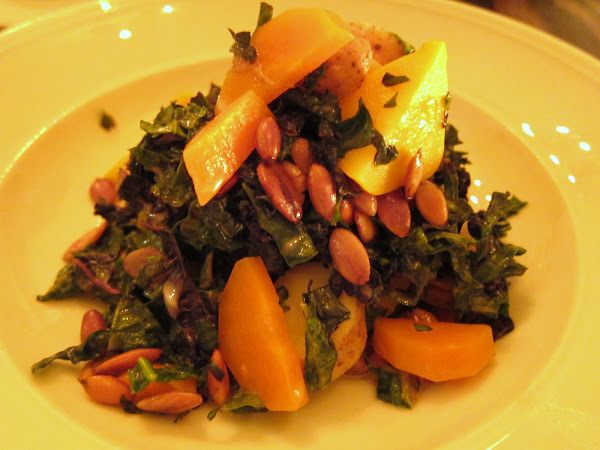 Here’s another unique dish I’ve never had anywhere else.  The greens were braised and sitting in a light tomato broth.  The poached egg provided a rich runny yolk that complimented the the acid and bitterness in the greens.  The bread crumbs kinda got mushy so it was my least favorite part.  Overall, a good dish. 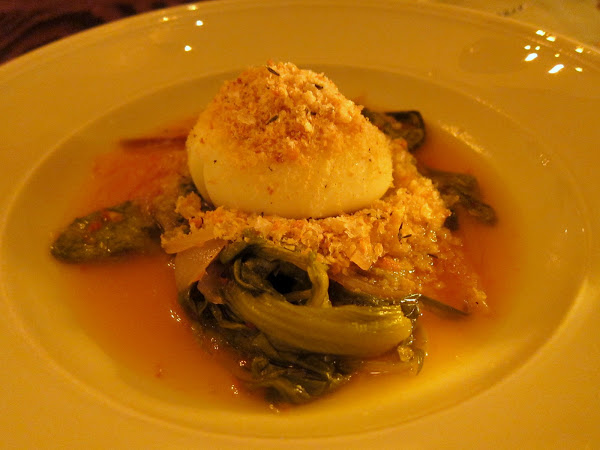 To start the 2nd course, they brought out a nice risotto that highlighted the sweetness of carrots.  I think they finished it with a generous amount of extra virgin olive oil.  It’s taste was sort of distracting and didn’t pair well with the risotto.  I still liked the risotto itself though. 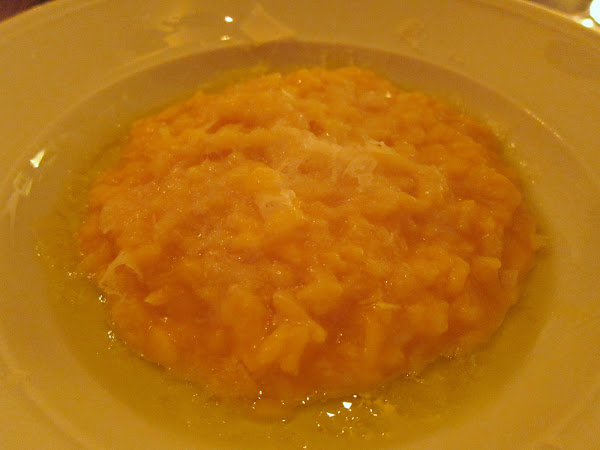 Now here’s a dish you’ve had everywhere, pasta with meat sauce.  Here they used cavatelli and they called the meat sauce, pork sugo.  In any case, it was solid but pretty darn spicey! 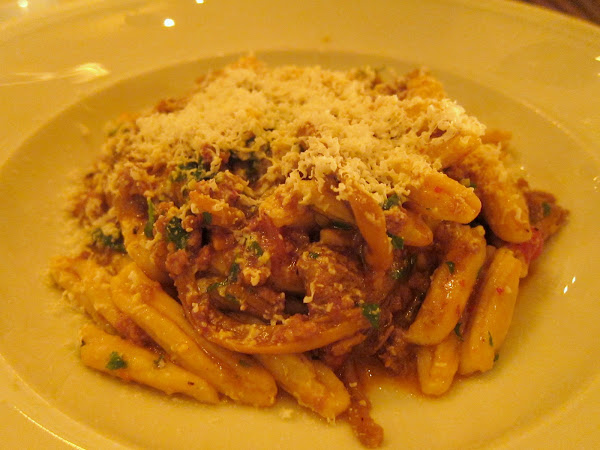 Now onto the 3rd course.  A well cooked piece of flat iron steak.  Surprisingly, I’m finding beef to be one of the least interesting and least memorable items when I dine out.  I really like the collard greens and butternut puree.  Everything was well balanced. 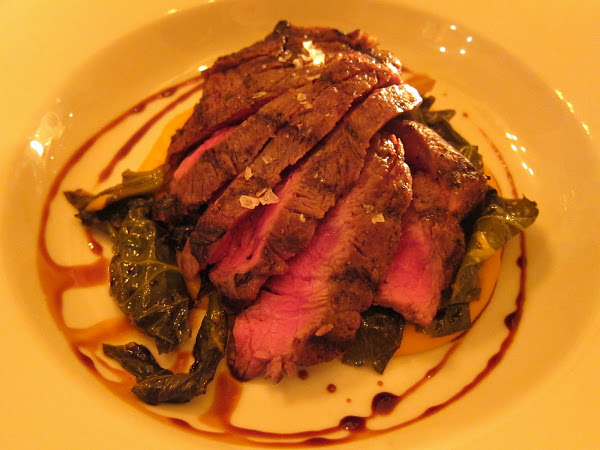 The skin on the fish was super crispy, but sadly part of the fish tasted just a tad under done.  It was still good.  I appreciated how they got some good caramelizatoin on the green cauliflower.  The sauce was just a touch creamy and went nicely with the fish. 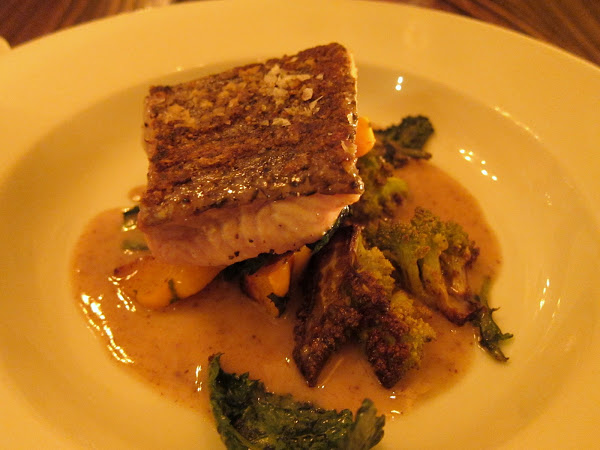 We thought the tasting menu only came with 4 courses so we were certain this was the end.  We don’t consider cheese a dessert but we were busting at the seams, so were glad to see the meal end.  Strange enough, we actually thought all the pairings went so nicely with each other.  Pear and blue cheese?! 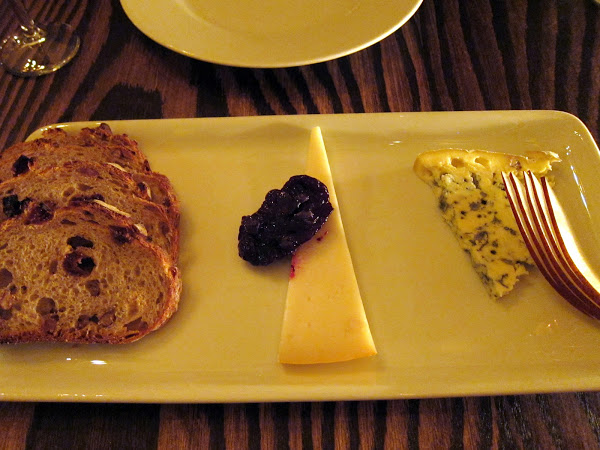 Extra course?!  Dang they served us dessert.! I seriously wanted to die, but I’m a trooper so I marched on.  The desserts were just ok.  I liked the bread pudding over the other dessert.  This was moist and comforting.  The lemon sauce gave some tart contrast. 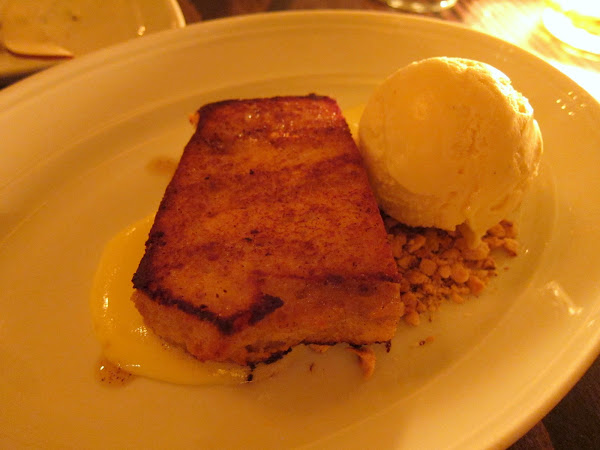 The cake was on the dry side, but the ice cream was more interesting than plain ole vanilla.  It’s nice that their ice cream comes in perfect scoops as opposed to melty football shapes. 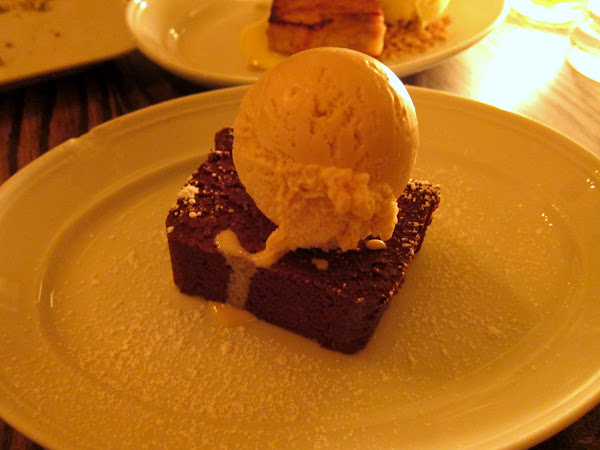 Wow, if you go to DOC you DEFINITELY have to do the tasting menu.  It’s a ton of food for such a great price.  It allows you to try more items too.  The food is very solid here.  No frills, as I’ve said time and time again about the restaurants in Portland.  What I really liked about DOC, while it’s pegged as being Italian, it doesn’t bore you with your typical Italian fare.  It’s right that they describe themselves on their website as “Italian-inspired, northwest ingredient-focused fare.”  The food is simple, but well executed.  Sure it’s weird walking into the kitchen of DOC the second you step foot into the restaurant, but its different to say the least, just like it’s food!  You should certainly make DOC one of your visits in Portland.