Like all the other Jews and Chinese people, we found ourselves looking for any open restaurant to celebrate Christmas Eve.  I originally was planning to make dinner, but Verde was orphaned for the holiday so we decided to make a night of it at Aviary.  This restaurant had the unfortunate luck of burning down shortly after its opening, but has reemerged like a phoenix from the ashes.  The menu certainly looked interesting, but a little too off beat to be appealing.  I’m glad Dumpling Man made the executive decision to eat here because it was DELICIOUS.

We started off with the most amazing bread and “butter.”  I say “butter” because there was something else in here that made it ohh soo tasty, but too bad I don’t remember what it was.  All I know is that I kept sopping it up with every teeny bit of bread.  Just go there and try it! 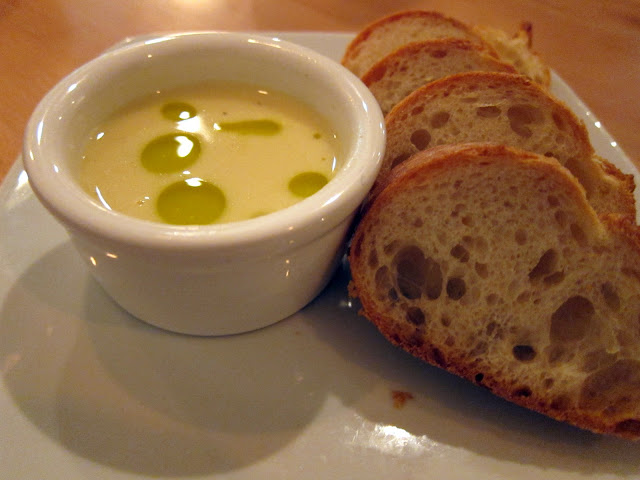 This was another tasty dish.  The downside was that it was so tiny.  It probably could have been eaten in 3 bites so between Dumpling Man, Verde, and myself we pretty much only got a small niblin’ each. The duck was tender, the egg yolk was runny and rich, the dates brought the sweetness, and the brioche added buttery crunch.  It was like a dish you’ve never had. 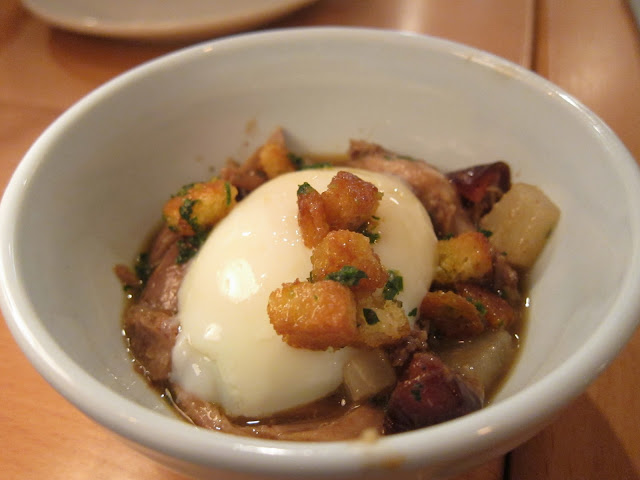 Have you ever had chinese beef stew?  Well this tasted like a bite of that with a slight crunch on the outside.  It was a neat take on a traditional dish.  Super small though!  I could have fit 3 in my mouth if I tried. 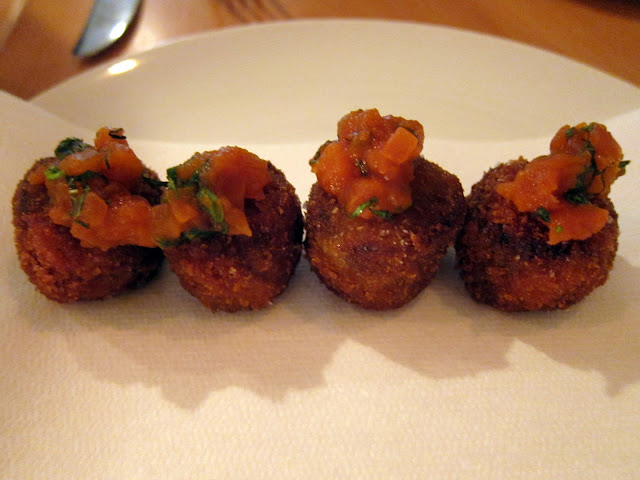 Not the best oysters I’ve had, but the tomato granite was cool and refreshing with a bit of kick from the horseradish. 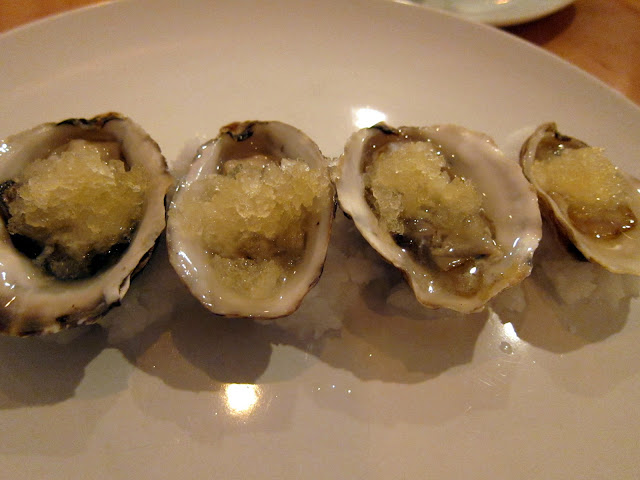 The dish looked like a big mess of unappealing colors, but tasted wonderful.  The scallops of course were well caramelized.  Aside from that, it’s hard to identify the individual flavors, but it really came together nicely.  The puree of whatever, maybe potatoes? was delicious, creamy and smooth. 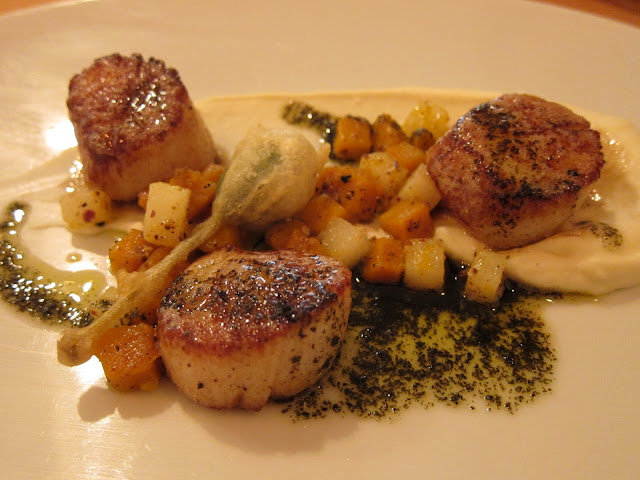 I was expecting crispy chicken skin, but the skin was battered and fried.  The crispy batter was delicious and house a fatty somewhat gelatinous (in a good way) piece of skin inside.  The watermelon contrasted nicely with the bitter greens.  The baba ganoush was out of left field surprise taste but went nicely. 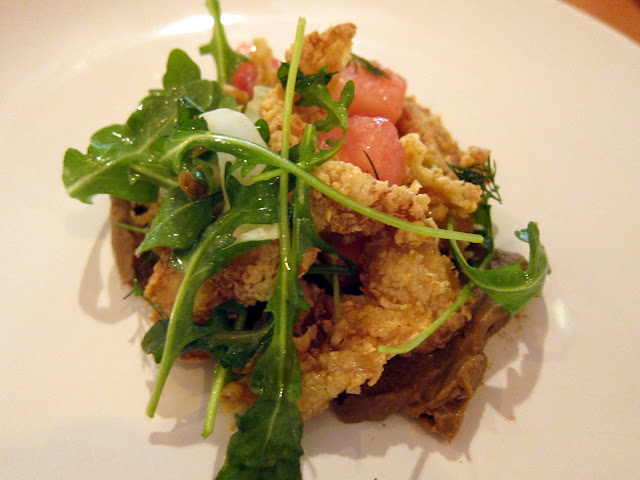 This was the most uninteresting dish of the night.  They meat was more medium than medium rare but it wasn’t terribly offensive. 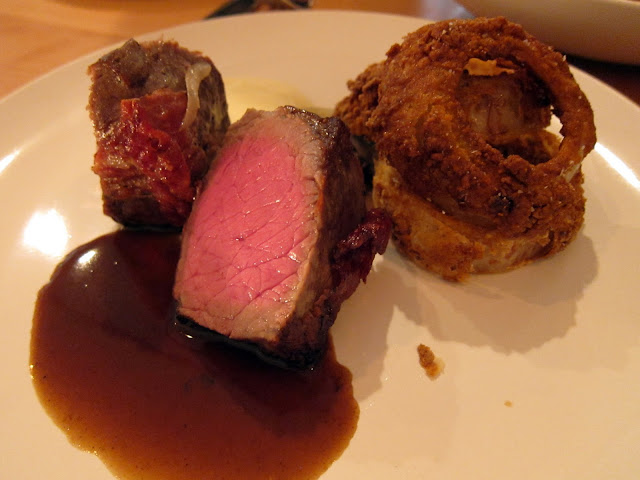 I was expecting something completely different, but was quite pleased with the stuffed tender moist chicken that arrived.  There were so many varying textures throughout this dish, and the flavors were Asian, but not anything I could readily pinpoint. 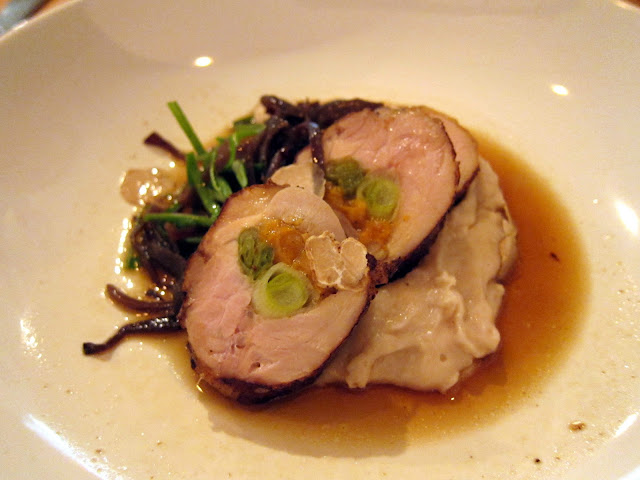 Most Asian fusion places go the route of sticky and overly sweet.  I’m glad Aviary did not do this, especially with this dish which was neither of those.  The pickles were a good tempering component to the slightly sweet tender beef. 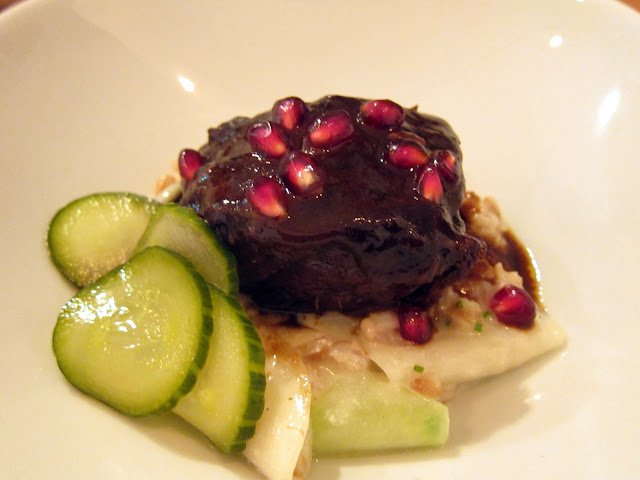 Dumpling Man and Verde chose this dessert which I didn’t like that much.  I found the cake to be on the dry side and I’m not a fan of bananas.  The ice cream wasn’t overwhelmingly alcoholic and the florentine was a crunchy sweet addition. 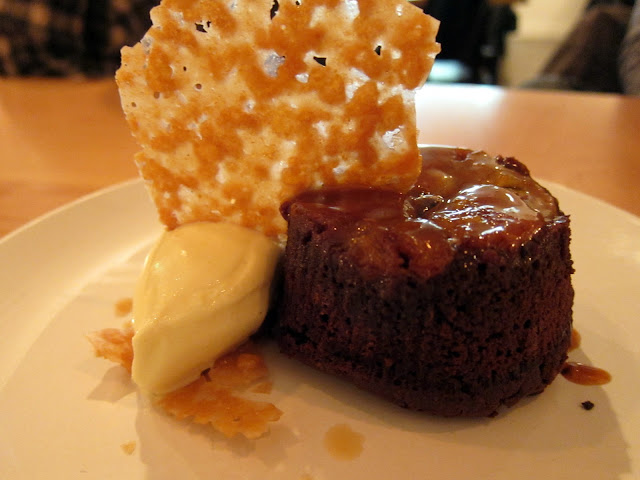 Aviary is like no fusion place you’ve ever eaten at.  Nothing about the dishes are readily “Asian” and if they are, it’s very subtle or cleverly twisted.  I wouldn’t be discouraged with how the menu sounds, because they do a great job making everything tasty.  2 thumbs up here!