Michael Chiarello has made quite a name for himself by being one of the 3 finalists in the first season of Top Chef Masters.  Let’s be honest, the first season was the only season worth mentioning.  Subsequent seasons have been pretty lackluster.  Anyways, I was pretty impressed with Chef Chiarello’s mastery of Italian cuisine, so I was really looking forward to trying out Bottega during my jaunt to SF a few weekends back.  The Pouter had amazing things to say from her experience there, so the expectations were high.

The Pouter recommended this dish.  It was pretty solid.  The sausage was spicy and was mellowed out by the rich runny egg yolk with its crispy exterior and then complimented by the slightly bitter and sharp endive. 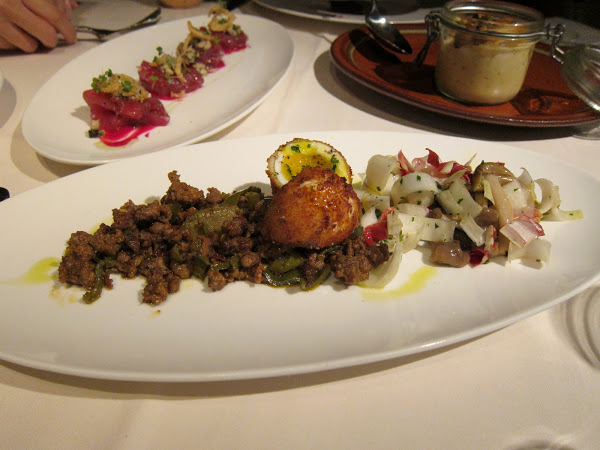 This was one of my favorite dishes of the night.  The polenta was rich and buttery and the mushrooms were earthy and delightful.  The balsamic game sauce was savory with a bit of sweet tang.  Yummy!

Unfortunately I do not remember what this dish because it was part of the daily specials.  I wish they’d give you a little card with all the specials written down because sometimes I can’t follow all those words that the waiter spews out at you.  And it makes it hard to remember things for the blog.  Anyways, this was probably a tuna crude or something.  It was a nice little bite.

If you asked me a couple years ago if I associated octopus with Italian food, I would have said no.  But now having seen octopus on many Italian menus, I would have to change my answer.  The octopus was well seasoned with a nice char, but Smooth Obturator felt it was too soft and probably not fresh.  I argued that a restaurant of this caliber could not possibly serve frozen seafood!  But I could not explain why it was lacking the proper texture.  Anyways, it was a tasty dish with the addition of the sharp arugula, tangy pickled onions, and bright salsa verde.

I’m so over braised short ribs.  Everywhere you go, they have serve them, and they usually taste the same.  These were good.  The spaetzle was little twist on the usually accompaniment.  Smooth Obturator didn’t seem too impressed though.

Triple T, Triple F, and I all wanted to order this dish.  It was certainly my favorite pasta of the night.  I loved all the giant prawns and got to suck on one of the heads since Triple F doesn’t eat such things.  The bonito flakes gave the dish a subtle fishiness which I found strange for an Italian pasta.  It was interesting though and all that saltiness was mitigated by the cherry tomatoes.  The big spaghetti was different but a bit much.  Overall I seemed to like this dish more than my dining companions.  They thought it was too salty, which I can’t deny.

This was another special of the night.  With all the rain, they had crazy amounts of chanterelles pop up locally, so they were incorporating it into many dishes.  Although this dish looks pretty bland, it was darn salty.  I didn’t really get much mushroom flavor in, but rather lots and lots of saltiness in each bite. Disappointing.

I’ve had wheat pasta before and I didn’t like it one bit.  So I was note hopeful for this dish, but it was turned out to be ok.  The pasta was not as dry and tough as other wheat pastas.  You really couldn’t even tell the difference between that and normal pasta.  The sauce was meaty, but again, very salty! 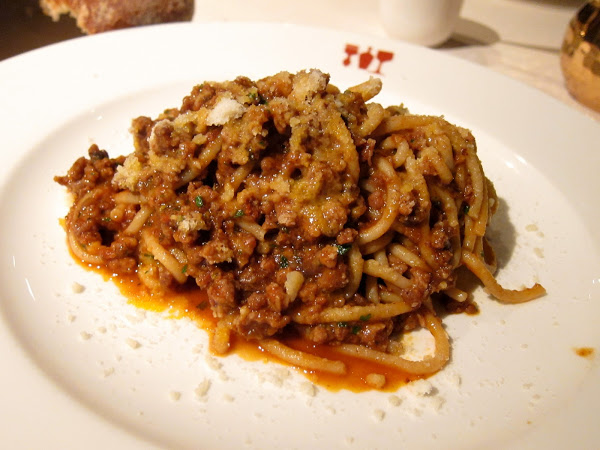 I can’t resist a medley of seafood, so I ordered this for the table to share.  The seafood was overcooked unfortunately.  The shrimps were mushy, the mussels were tough..ugh.  The sauce was nice and the olive oil crouton was probably too oily for my taste.  The dollop of heavy creamy whatever on top didn’t help. 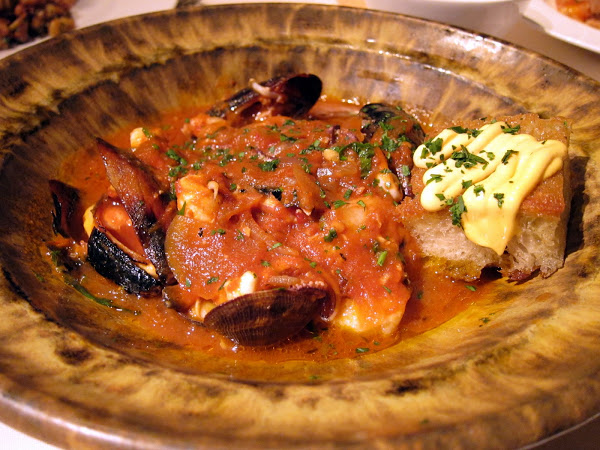 We were all pretty stuffed at this point, but wanted to end the night on a sweet note.  An order of bombolini has never let me down.  I forget what sort of sauces were served on the side.  I think a lemony one and a berry one.  The fried fritters were pretty light inside and not too sweet.  I think I’ve had better though. 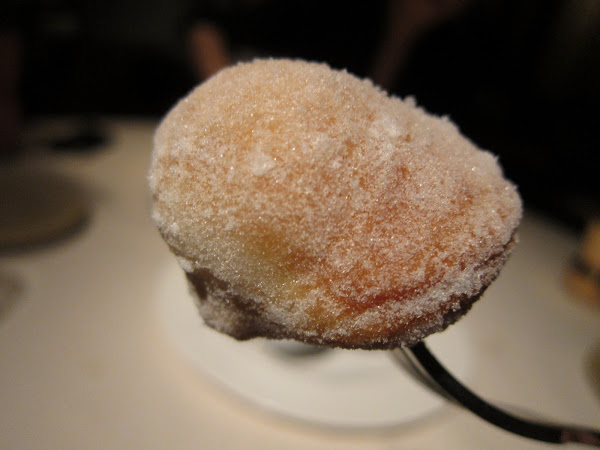 We were all pretty surprised that a restaurant like this could fail in the basic principle of seasoning.  Too many dishes were over salted and it just ruined things.  I imagine if things weren’t as salty, we all would have had more positive feelings for the night.  Unfortunately, Osteria Mozza still beats this place out as the Italian restaurant for me.  It’s hard to beat the mozzarella bar.  Still, Bottega had its highlights, namely the polenta under glass and black garlic spaghetti grande (minus a teaspoon of salt or a heaping of bonito flakes).  Given the reputation of the chef, I would be willing to come back, but not until I’ve tried all the other marvelous restaurants in Yountville.  I’m looking at you, French Laundry.