So my mom has become sort of a traveling gnome these days.  She plans these elaborate trips, it’s beginning to feel like every years now, with all her lady friends to quite exotic destinations.  This year it was Turkey and Sri Lanka with a short jaunt to Vietnam.  She often goes in the fall and this year she happened to be gone during Thanksgiving.  With her gone, my siblings and I were sort of at a loss of what to do.  In the end, everyone else decided to take a trip too.  Triple F and Running Man went to South America and Smooth Obturator and Triple T went to Bora Bora.  By the time I thought of going back home to spend Thanksgiving with Dumpling Man’s family, plane tickets were through the roof.  So that left Dumpling Man and me, alone, in rainy Portland for Thanksgiving.  Luckily, Zhu Zhu Hamster was also in town and she brought along her friend, Little Pet.  So I took this opportunity to attempt my first Thanksgiving dinner for 4.  I didn’t make all the usual things I normally eat with my family.  The only thing I really missed out on was the Oyster and Shrimp Stuffing which I have been eating with my family for as long as I could remember.  Dumpling Man very much dislikes my family’s stuffing so I tried to do a more normal one this year.  All the recipes I used this year came from trusty foodtv.com.

I adapted this recipe for a 4.5lb chicken instead of the intended 12-14lb turkey.  First of all I don’t like turkey all that much.  And second of all, how can 4 people eat all that turkey?  The recipe also called for brining for 2-3 days and drying it out for another day.  Uh, who has all that time?  I brined it for 1 day and dried it out for 4 hours.  I figured, smaller bird, shorter prep time?

The recipe also called for cooking the turkey at 17 minutes per pound.  I did some cross referencing and went with the timing suggested by the roasted chicken recipe in Ad Hoc At Home.  It’s a darn good thing I did that, otherwise the turkey would have ended up dry as a bone.

The chicken turned out PERFECT.  Like seriously, I’ve never cooked such a large heap of meat to perfection ever.  Braising doesn’t count since you can’t ever really overcook something braised.  The longer the better with braising.  The meat was sooooooo succulent and juicy.  The white meat might have been tastier than the dark meat!  I think the key to the moistness of the chicken was definitely the brining.  I didn’t even have to brine it nearly as long as the recipe recommended, but that’s probably because I started with a much smaller bird.  I think using an organic chicken made a difference.  It had a definite chicken taste, but in the best freshest sense.  I did pay $1 per pound more for organic, but if you’re going to go with as plain and ho hum a meat as chicken, you might as well go all in and spring for organic.  In any case, it was the MOST DELICIOUS roasted chicken I have ever tasted.  This one is making it to my saved recipes for another day.

The pan drippings from the chicken made the most amazing gravy that went perfectly with the chicken.  I didn’t add as much apple cider as the recipe called for only because I liked how the gravy was just a little bit sweet and tangy and I still wanted a savory poultry flavor to come through.  My gravy had lotta lumps in it so I just strained them all out. 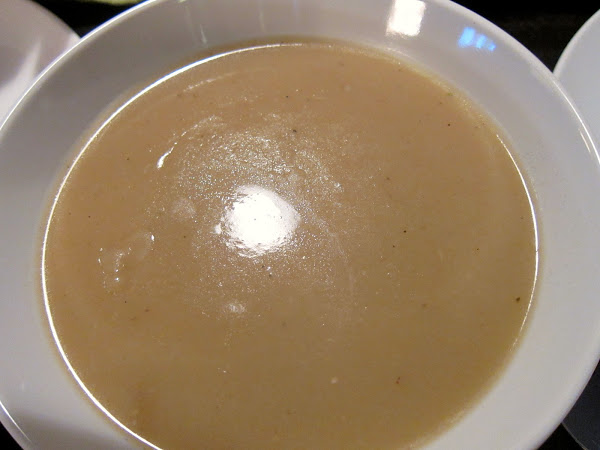 I gave Dumpling Man and Zhu Zhu Hamster the choice of mashed potatoes or potatoes au gratin and they both chose the latter.  I’m not so much a fan of these cheesy potatoes but it obviated the need for something like mac ‘n cheese.  Most recipes I found were pretty straight forward, cheese, cream, and potatoes.  Luckily I stumbled upon Ina Garten’s more complex recipe that incorporated sautéed onions and fennel.  I think this made the dish stand out a little bit more and gave it more texture, but it was still pretty cheesy and creamy.

I’ll have to admit I was pretty disappointed and ashamed to serve this.  It was quite blah.  Of course, Ina Garten’s recipe calls for using real bread as do most of the other stuffing recipes on foodtv.com.  I’m not used to using real bread.  I’m used to using the stuff that comes out of the box.  I really like the texture of boxed stuffing and I don’t know any different.  I know Dumpling Man feels the same, so I didnt want to rock the boat too much on this first Thanksgiving.  So I attempted to take the middle ground and use unseasoned croutons instead of the seasoned Mrs. Cubbison’s, wanting to add my own flavors with all the herbs called for in the recipe.  The herbs and vegetables just didn’t seem to come together with the bread.  I kept adding more stock hoping it would all meld, but it didn’t.  It wasn’t even dry either.  I’m gonna have to re-make this one using Mrs. Cubbison’s to see if that makes a difference. 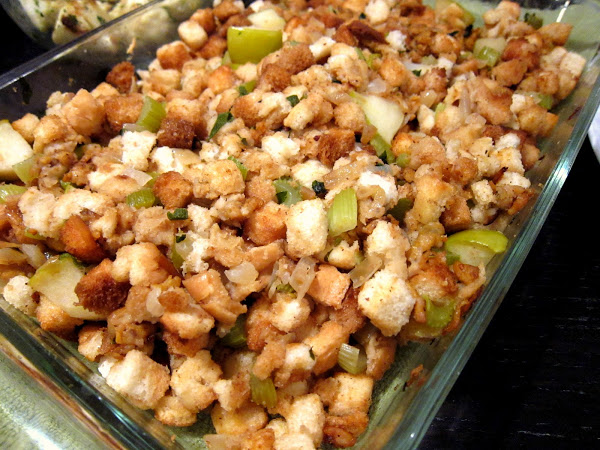 I am proudly taking all the credit for this delicious creation, although I did have some inspiration from Melisse.  Of course, we needed a vegetable dish, and I didn’t want to do some unhealthy vegetable dish like green bean casserole or something plain like roman lettuce and bottled dressing.  Oh no, I stepped it up a notch and sprung for a $15 3.4oz bottle of white truffle oil.  You may be shocked at that sticker price, but Whole Foods actually sells another brand that was over $30 for a slightly bigger bottle.  Crazy, right?!  Anyways, the salad was simple enough: thinly sliced organic fennel, shaved organic carrots, mixed greens, thinly sliced sweet fuji apples, candied walnuts were all tossed together with a dressing of lemon juice, olive oil, truffle oil, minced shallots, and salt and pepper.  Then I just laid out some prosciutto around the dish for presentation.  I purposely chose organic carrots, only because regular carrots look so sad and dried out sold as a bunch in a bag and sometimes have that old carrot taste.  The organic ones looked like the kind Bugs Bunny would eat, green tops still intact and all.  A seriously simple, delicious, and pretty pricey salad, but totally worthy it.  Better put down truffle oil on your Christmas wish list.  It would be a great present to give or receive for any foodie.

Zhu Zhu Hamster was doing some experimenting and brought over an extra dish.  She got some beautiful color on them.  They were pretty simple and tasty.

Zhu Zhu Hamster’s main contribution was the appetizer.  This was some pretty solid spinach dip.  I was told the key was some leek onion dip used as a base for the dip.  In any case, this stuff was delicious. 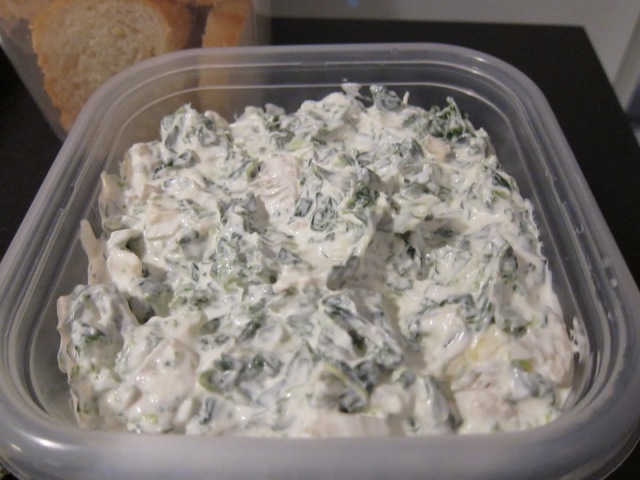 Everyone seemed to like the chicken and salad the best.  I would have to agree.  The chicken had wonderful aromatics from all the various herbs and it was juicy.  The salad had wonderful contrast of textures and you can never go wrong with truffle anything.

In my apartment building, they were having pie samplings from a local bakery, Pieku, and taking orders for Thanksgiving pies to be delivered the day before Thanksgiving.  Well, I didn’t get to sample the pies but people were raving about this one.  I figured I’d be too busy making dinner that I didn’t want to stress about dessert on top of it so I went for it.  The pie was disappointing.  I dunno where the salted caramel was, but it certainly didn’t make it to pie.  It tasted dry overall and the apples were tasteless.  I’m glad it wasn’t too sweet at least.  We had it a la mode which probably helped with the dryness. 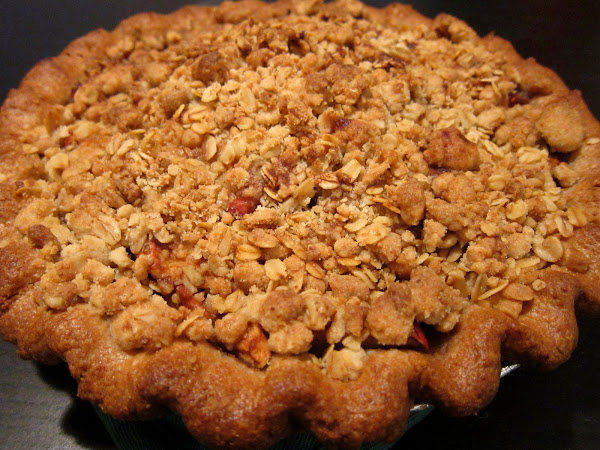 I think this Thanksgiving was success.  I’m sorta bummed I didn’t get to see my family, but I’m glad I got to attempt dinner all on my own and make some other very special people in my life feel very full and satisfied.  Thanks to Zhu Zhu Hamster and Little Pet for bringing over some delicious wine, Magic Mic, and Taboo.  I sang my heart out that night and was told I have a country twang to my voice.  Dumpling Man and I also kicked butt in Taboo, but it helped that Zhu Zhu Hamster and Little Pet really really sucked.