Since Smooth Obturator moved to beach, he’s been trying to embrace the true “California fun in the sun” lifestyle and culture.  He goes running on the beach, bike riding up to Santa Monica and down to Redondo Beach, and occasionally surfing if he feels like looking like a fool.  It’s been nice to have a place to go to that’s right on the beach, even though it’s not my own place.  On one gloomy weekend, my mom, Smooth Obturator, and Triple T rode bikes down to Redondo Beach to catch a chowder cook-off near the pier.  Also in this area, there is a small seafood market that sells fresh shellfish like crabs, oysters, and clams and fry joint next door that sells prepared foods like ceviche, fried shrimp, french fries, fried oysters, etc.

You can select the different sorts of oysters you’d like to be shucked.  You can also pick from a good selection of different crabs to be steamed on request. 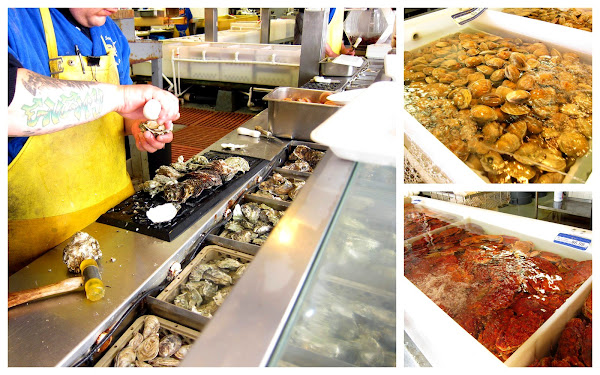 I’m not really sure which “charity” they were raising money for and I forgot to ask.  For $7 you got to have 5 samplings out of the 12 vendors serving chowder.  Only one booth was offering Manhattan Clam Chowder.  Everyone else was serving your regular New England Clam Chowder.  In the end you vote for your favorite. 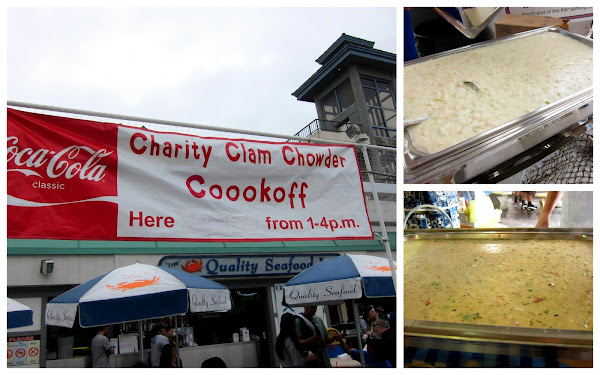 For the most part, none of the chowders were that amazing.  The ones that stood out were the ones that had a nice use of herbs like rosemary and were chunky with plenty of potatoes, veggies, and clams.  The one in the bottom middle was frankly offensive for being watery and salty.  I was the only one that paid the $7 for the chowder sampling.  Smooth Obturator would have preferred I sample all the chowders and then tell him which one was worth buying a big bowl. 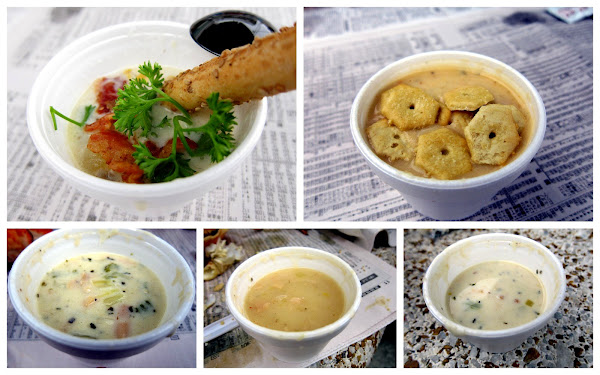 For $14 you can have your very own sea urchin slaughtered right before your eyes.  The only reason I say it like that although all the other seafood was indeed slaughtered as well, was that this was still moving on the plate.  All those tentacles were just slowly writhing around.  Everyone around us was sooo fascinated when we brought it to the table.  I’m not a huge fan of uni, but this was not so bad.  Sweet and briny.  I don’t know how the sushi places get perfectly pieced lobes of this because it just looked like a lot of orange mush from the most part. 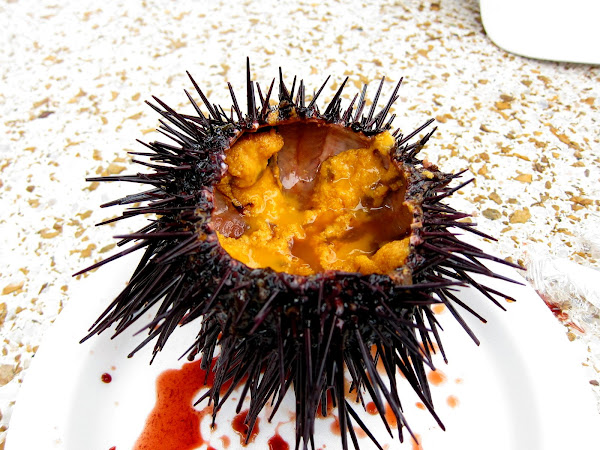 It actually took a fair amount of time for all the oysters to be shucked.  They didn’t look all that pretty like the oysters you get the in the restaurants.  There were plenty bits of sand in a lot of them, and most looked pretty ragged as opposed to plump and juicy so I was not so hopefully.  Boy were they pretty spectacular, without any fishy unpalatable ocean taste.  It was just a bright and refreshing bite of salty seas.  With a squeeze of lemon, I was feeling like oysters were something I would definitely like to try more of.  The clams weren’t as memorable, but they were as bad as I was expecting. 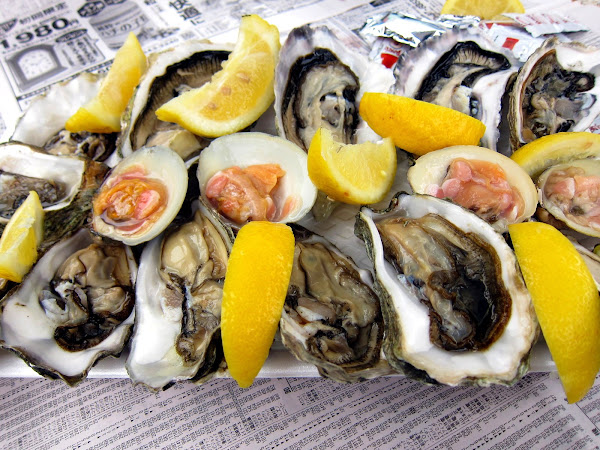 That big one humping the other crab was a 3lb Dungeness crab priced at a whopping $42.  It was pretty darn meaty and with the addition of the other crab from Santa Barbara (not sure which kind), we were quite full.  It was a big mess to eat, but the meat of the Dungeness was so delicious and sweet.  For a $3 deposit you can get a small wooden hammer to help you break down the shells to unearth the sweet treats! 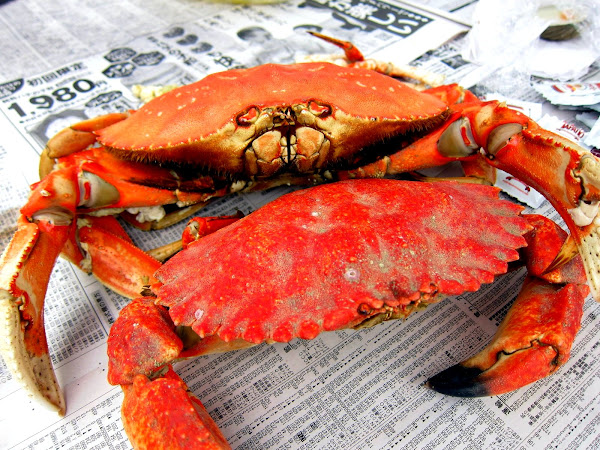 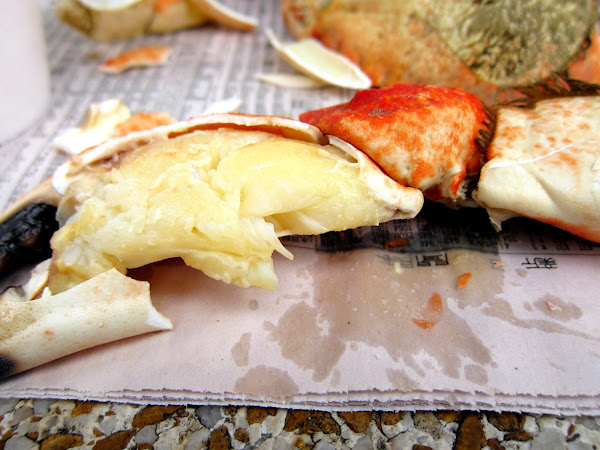 We were all pretty full after the seafood binge, but we had passed by the churro place before lunch and I had not forget about it just because I was full.  For $2 we got a warm cinnamon sugar encrusted dough stick.  I can’t remember the last time I had a churro that was not from Baja Fresh.  This one just really blew those out of the water, which is probably not a fair comparison.  It was so soft and moist in the center and perfectly crunchy on the outside.  We only got 1 churro to share among three of us and after we finished I was left wanting more.  Next time I’m getting my own. 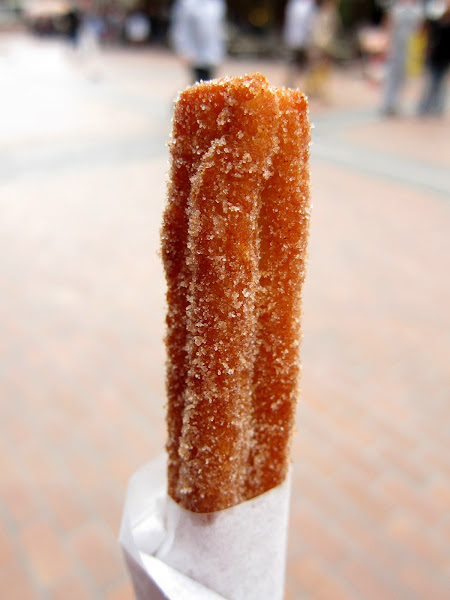 After the churro we biked back to Manhattan Beach and decided to keep going further north past the power plant.  Boy was I pooped when we went up and back home.  My legs were bordering on noodley at the end of the day.  It was a really fun day, doing something a little different.  There was no Michelin stars involved here and it was memorable nonetheless.  Even though we came for the chowder, we left full of anything but chowder.  The seafood was great and I’d love to bike down again.  But more of an incentive for a repeat trip is that damn churro!