Boy was I looking forward to eating here all week long! After watching Top Chef Masters, I made a mental note of all the LA top chefs and all their restaurants so I could eventually try them all. So that would include Jar, Ludo Bites (no longer at the Breadbar by my house sadly), Campanile, and Providence. The only one with any Michelin Stars is Providence with an impressive 2 stars. The 2 stars are well deserved in my opinion. So lets start our journey.

It was my sister’s birthday so she flew in from SF to spend the weekend and do what the H.o.P. does best…GRUB. A place like Providence should be reserved for special occasions, and the descent into wrinkles and menopause certainly deserves forking over $$$$ for an extra inch on the waistline. 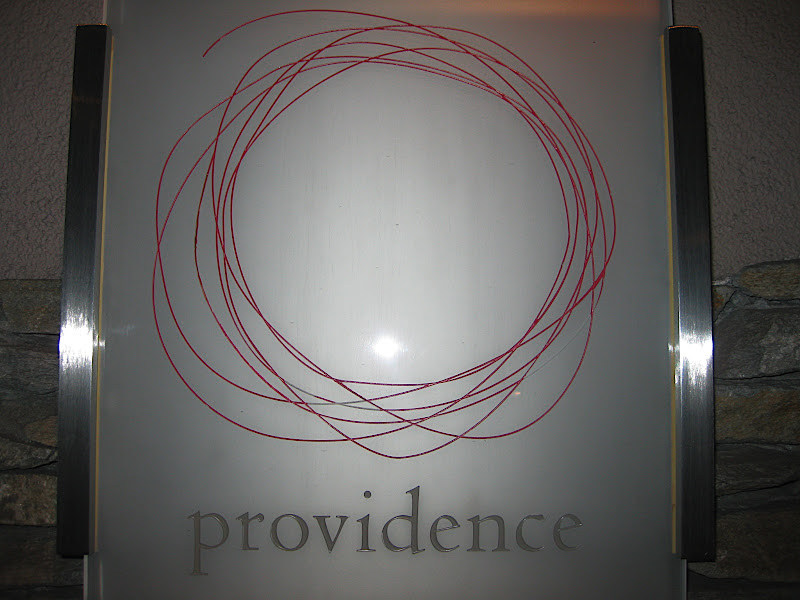 The ambience. It wasn’t an exactly open layout, say like Cut. It was more partitioned off, and I’m not exactly sure how many areas there were but the room we were in had some funny stuck on things on the wall. Looked like sea shells but on closer inspection they were more like tortilleni shaped plaster things. Anyways, totally unimportant especially since I have no visual to show you. This next picture makes me want to go out and get a tripod. The Dairy Queen was right in his photo tutorial to me. It’s all about lighting and how steady you are. This picture was obviously taken with the camera sititng on the table. I was pretty impressed at how nice it looked. 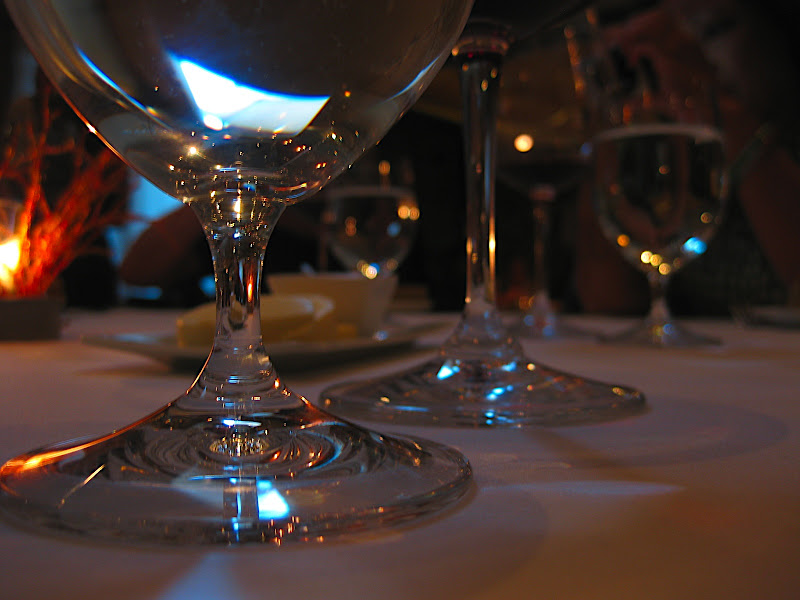 So I took every dish with and without flash. In my opinion flash really sucks. Makes things look so harsh, but these darn fancy restaurants and their low lighting makes food picture taking a real task. I got decent shots without flash, but for the extra detail I decided to post the flash ones.

The bread. Bacone brioche and olive foccacia. The bacon brioche tasted like you were eating a more moist and less crispy version of a biscuit with these undertones of bacon. I bet you instead of using butter for the fat they just used bacon drippings cuz I only got one or two bacon bits in my one brioche and it was deliciously bacon-y. The olive focaccia was also quite savory but not overwhelming olive-y. Both were annoying to eat cuz they made your hands oily, but I eventually caved and used a fork to eat my bread =). Nothing wrong with that I say! 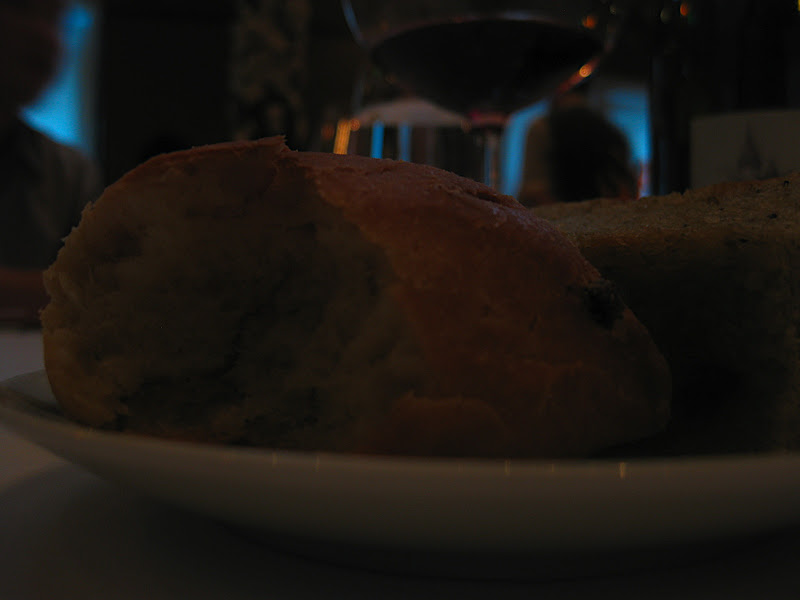 We ordered the 5 course tasting menu for our table of 7. We got wine pairings for 3 of us, but really we pretty much all shared the wine cuz who’s gonna drink one glass of wine with each course? On top of that we ordered a bottle for the table to start the night off. I think my brother has picked out better wines in the past, but still better than the 2 buck chuck sitting in my kitchen. 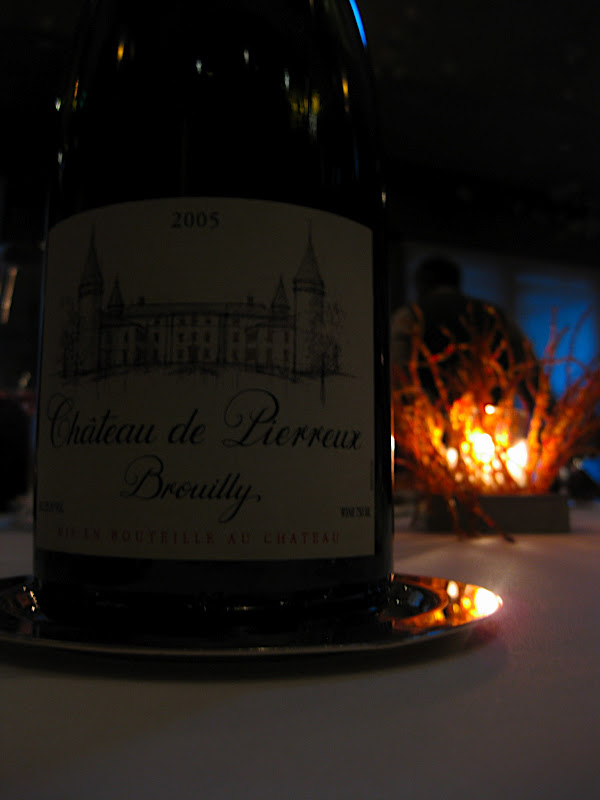 The amuse bouche. From left to right. Gin &amp; Tonic in a gelatinous cube which is activated by the lime. Mojito in a thin skin that breaks in your mouth. Carrot soup with creme fraiche. The last one didn’t really make much of an impression on me. The gin and tonic was interesting, but the mojito thing was wonderful. Both had such interesting textures and I never really imagined drinking alcohol this way. Very fun. 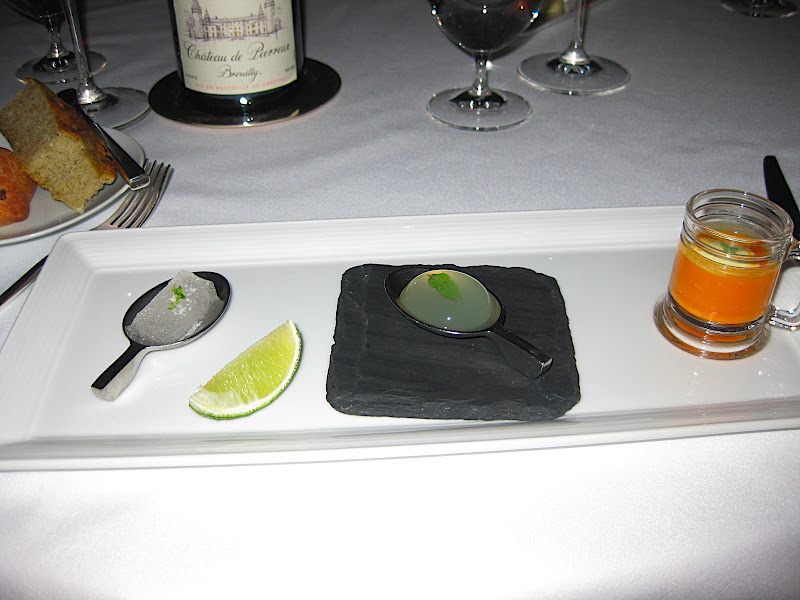 Very fresh, delicate, and a good starter. The flowering coriander was a nice touch. 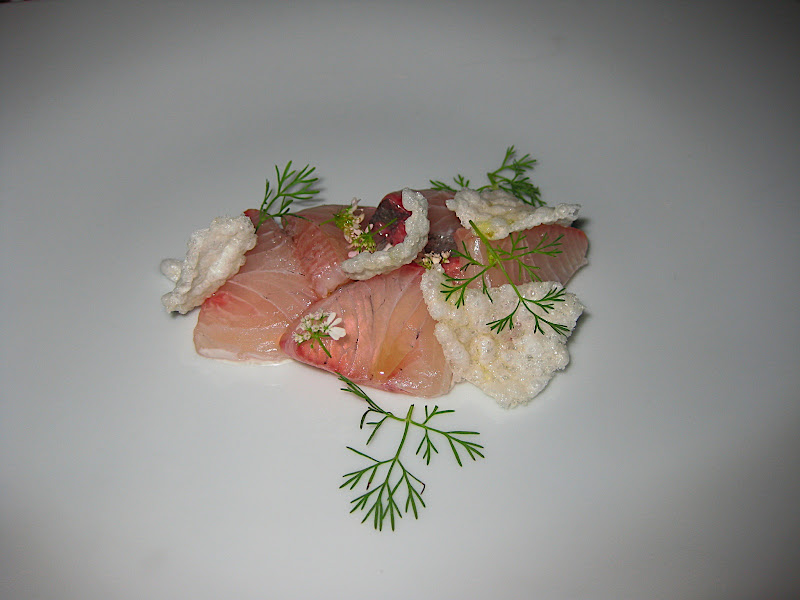 Oh so I mispoke when I said we had 5 courses. After hearing the description of the spot prawns from the waiter, we decided to order it as an additional course. So 1 spot prawn for each person instead of 3 as a regular appetizer or 5 as an entree. It’s presented table side, still in the salt roasted pan. They uncrust it and plate it. I’m not sure if its cooked in the olive oil or if they drizzle it, but it is quality olive oil. I never smelled an olive oil so fragrant and delicious. It went well with a squeeze of lemon. I even ate some of the head and I was a lucky one that got a female so the eggs were creamy and delcious. 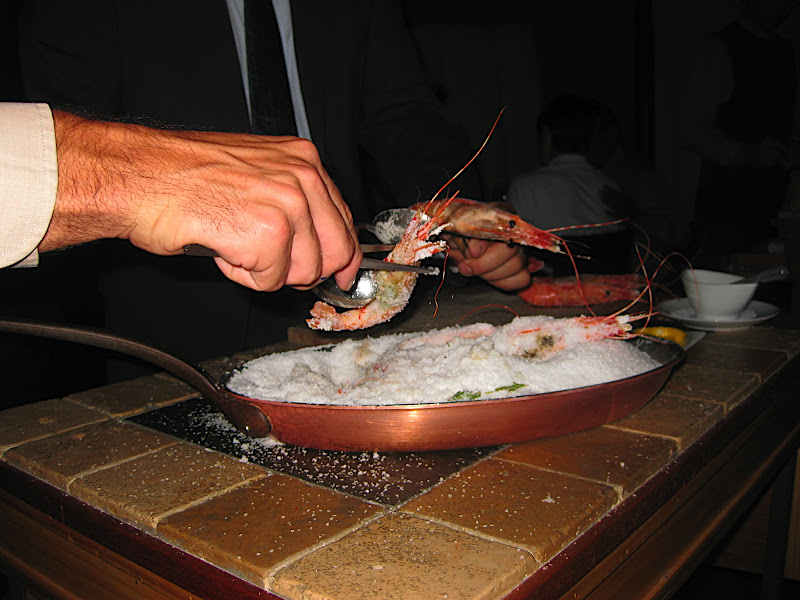 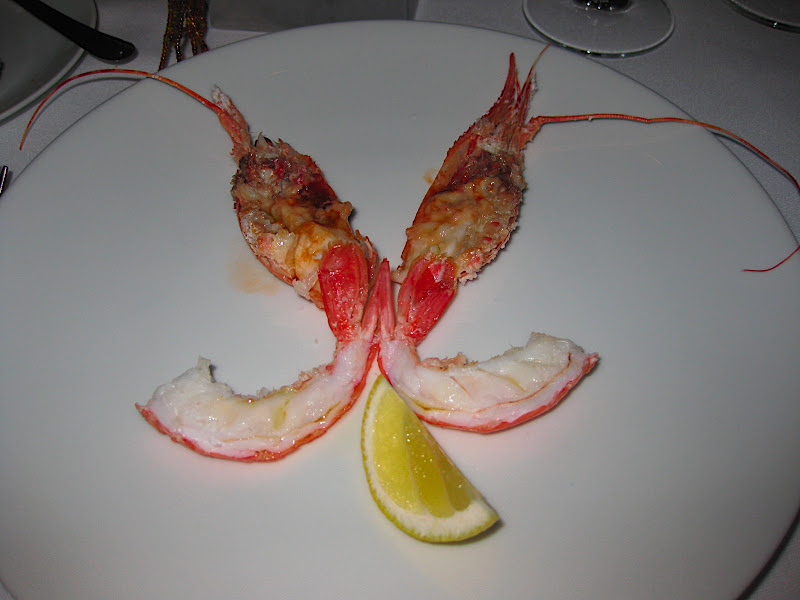 Don’t know what that last ingredient was. Probably related to the sauce, which was lovely. Scallop was perfectly cooked the the sauce was so interesting. The wine pairing for this dish was totally off. It was the sweetest darn Riesling I ever had. It was even sweeter than the Moscato served with dessert. Bad job to the Sommelier! Overall the wine pairings at Michael Mina was far superior although the food was far inferior. 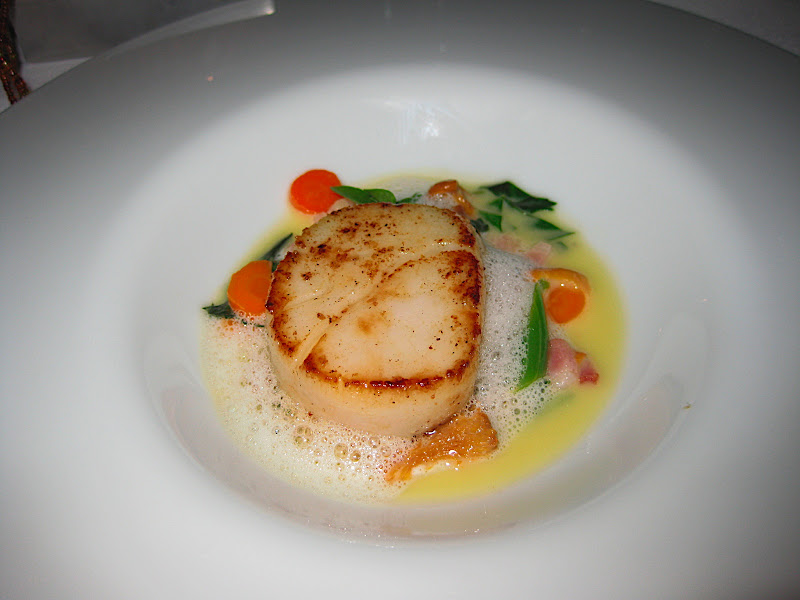 That crispy thing on top is burdock. Nobody knew what it was but we all loved it. Apparently, its some sort of plant thats eaten like a root vegetable, which makes sense since it had starchy quality to it and tasted like a fancy potato chip. We all associate halibut with being dry but of course this was very moist and light. 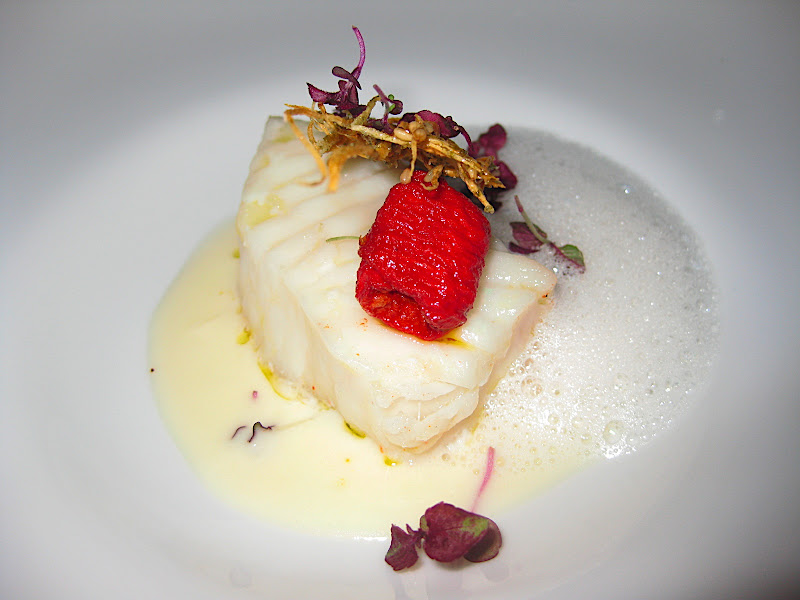 This was probably my favorite dish and my first time having anything “sous-vide.” After hearing it all the time on Top Chef it really makes you curious. So for all those who don’t know, per Wikipedia:

French for “under vacuum”,[1] [sous-vide] is a method of cooking that is intended to maintain the integrity of ingredients by heating them for an extended period of time at relatively low temperatures. Food is cooked for a long time, sometimes well over 24 hours. Unlike cooking in a slow cooker, sous-vide cooking uses airtight plastic bags placed in hot water well below boiling point (usually around 60°C or 140°F).

Anyways, the best part of the dish was the potate thing under the meat with a wonderful caramelized onion flavor. The meat was obviously very tender, the sauces went very nicely and I even ate the whole garlic! 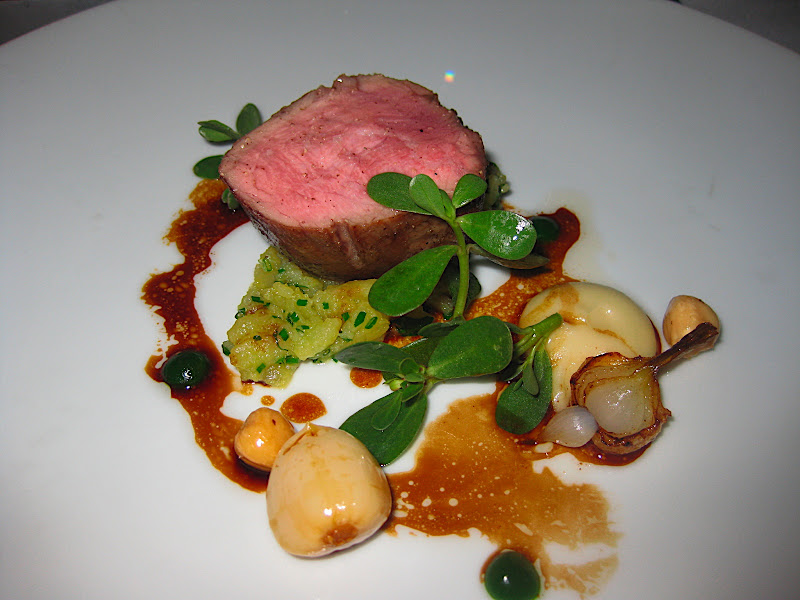 This dish caused us some headahces thanks to my intelligent sister. My mom doesn’t really like milky cheesey things being the typical Asian mom that she is. So when we initially ordered she asked if she could substitute out the cheesecake for another dessert. I guess we got the impression substitutions were not their favorite thing to do. So my sister chimes in that my mom is lactose-intolerant, which she IS NOT. So they ok’d the substitution most graciously. Anyways, the manager came to us afterwards to get more details about this “lactose intolerance,” pointing out that most dishes had some form of dairy in it. I guess they confused “intolerance” with allergy because it seemed like a whole to do. They served her first course without the creme fraiche in the carrot soup shot. It seemed like my mom’s tasting menu would be doomed, but I guess we clarified and my mom ordered a chocolate ganache for dessert. I think she really missed out because the cheesecake wasn’t really that cheesey. It was more like a panna cotta, very delicate. That chocolate mess on the right was actually gingerbread ice cream and it was sooo original and tastey but definitely melted a lot faster than the pear sorbet on the left. God, I wish I could eat some right now as I type. Droooool. 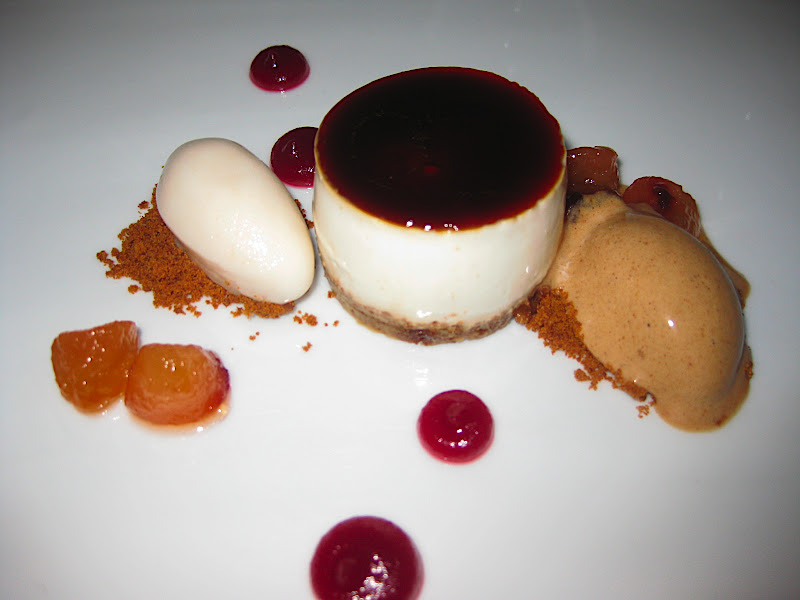 My mom’s dessert was too deeply chocolately, but quality nonetheless. I preferred the cheesecake. 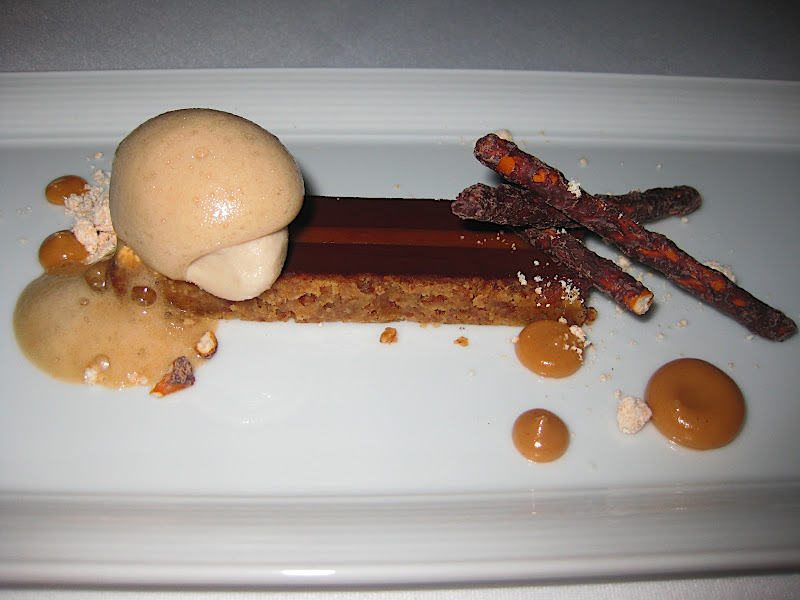 Overall this place was simply amazing. Everyone was really pleased, unlike with Michael Mina where there was a sense of disappointment. I can’t wait to find another occasion to go back for! I shall leave you all with this. 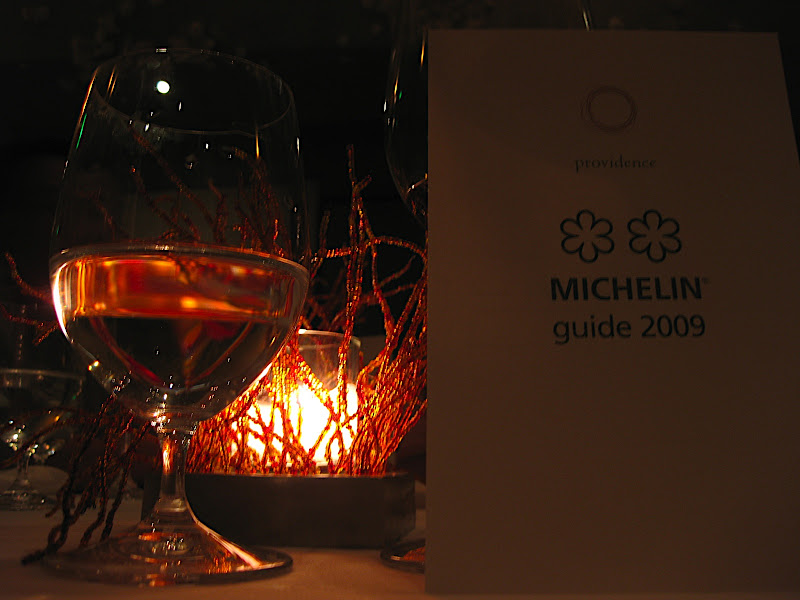