If you’re big on meat, seafood, and wine, Spain is the place for you.  If you love vegetables and carbs other than bread, the cuisine might not be as appealing.  I enjoyed the food in Spain, but tired of it quickly.  The protein onslaught was more than I could handle for 10 days straight.  At home, I eat quite a lot of fruits and vegetables and that was hard to come by in Spain.  Not trying to knock on the great cuisine of this country.  Obviously, I was choosing to eat at certain places because of their popular meat and seafood options so I did this to myself.  But to say the food of Spain is well balanced would be incorrect.

Italy was a welcome change of pace.  Pasta and tomatoes galore.  There’s no quicker way to my heart!  According to most people I talked to, Rome is not really known for its great food.  I found that incredibly hard to believe considering it is the capital city of the country and a major tourist destination.  Our first tourist stop was the Colosseum and Maccheroni Express happened to be on the way.

It’s a fast casual pasta concept.  You choose your pasta and its made within 10 minutes or so.  The menu is extensive and the prices were really reasonable.  There’s only a handful of tables.  At 4pm, the place was pretty empty. 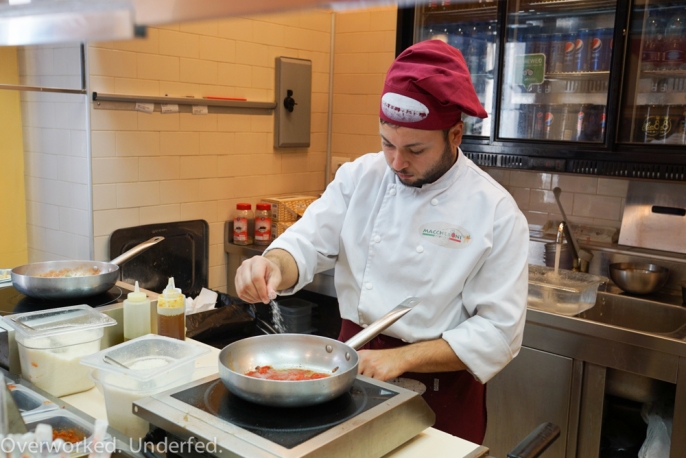 Sure, fresh pasta wasn’t being served here, but I’ve learned that high quality dried pasta can still result in a tasty dish.  The pasta was perfectly al dente and the flavors and seasoning were on point.  The eggplant pasta probably had the edge, but both were totally satisfying.  Certainly I would not go out of my way for this place.  Much of the food here can probably be made in your own kitchen with some basic ingredients.  The stark contrast from the Spanish food we had been eating, combined with the fact I was pretty hungry by the time I ate here, probably biases my opinion of this place quit a bit.  But if you’re looking for no fuss, no fancy, eat-and-go kind of pasta near the Colosseum, than this is your place.