Area Codes mentioned going to an offal BBQ place a few times.  To be polite, I would smile and give a half hearted “suuuure.”  Secretly, I would hope he would pick up on my lack of enthusiasm or forget about the suggestion altogether.  I’m pretty open to trying more foods than your average person.  I’ll even eat things I’ve eaten before and disliked in hopes of finding a version or preparation of the food that is better.  Take for example guavas.  I always thought I disliked guavas because they were sour and had a tannic aftertaste.  I just never had a great guava, so now I like guavas.  With offal, I have definitely had some awful offal (har har).  It just smelled too strongly of the inside of the animal from which it came.  It’s not like there wasn’t a dozen other great alternatives.

So after we spent the morning eating our way through Jagalchi and Gukje Markets, we headed to this “restaurant.”  It wasn’t so much a restaurant, as it was a collection of stalls.  Each stall was a separate kitchen operated by a different ajumma.  Each one hollers at you for your business as you pass by.  One in particular had every seat filled so we were forced to eat at the neighboring empty stall. 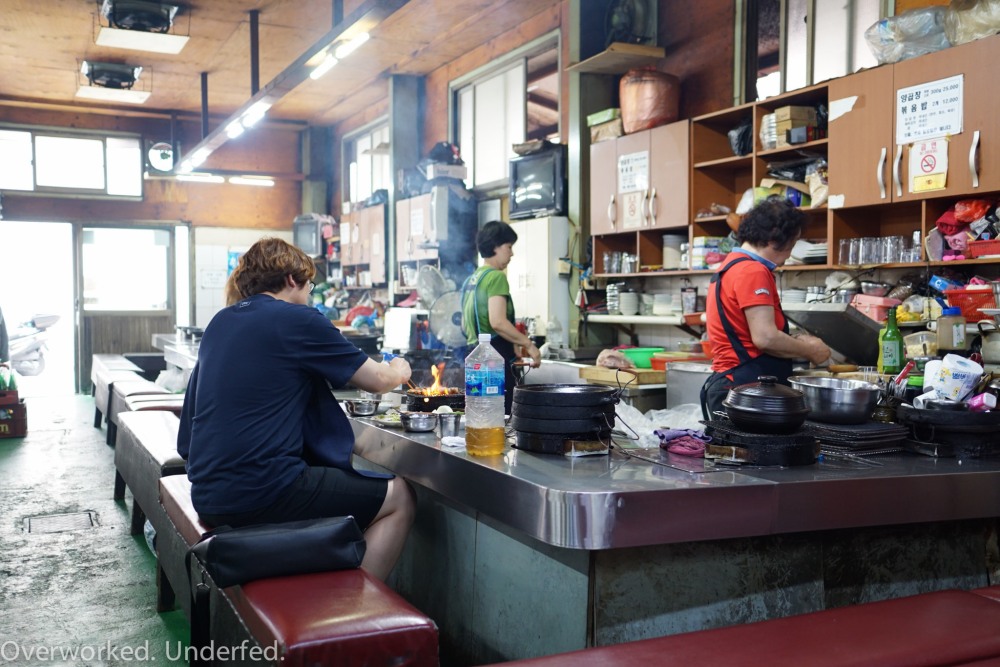 Our ajumma got straight to work. 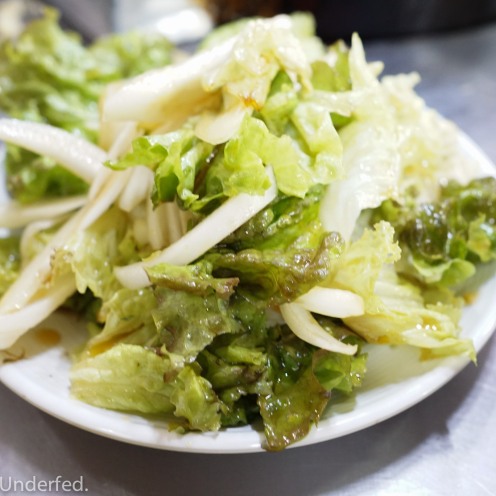 Offal small intestine, large intestine, tripe, heart
At first glance, you might think this was fish but it was all sorts of beef innards.  It was quickly tossed with sesame oil, salt, and heaping amounts of chopped garlic. 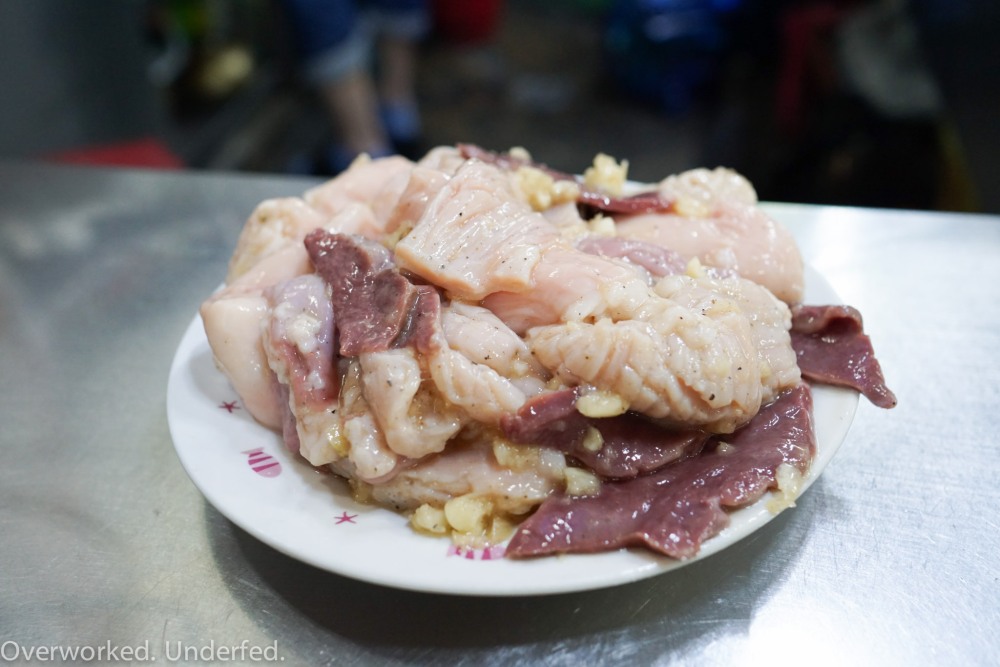 The small intestine was a little chewy.  The large intestine took longer to cook, but had an odd texture, like chewy fat that I didn’t quite take to.  The tripe and heart were probably my favorite.  Heart has a snappiness that I enjoy.

Alone the offal was seasoned well, but with the tangy sweet soy based dipping sauce, chili sauce, and salad, each bite was pretty delicious.  It didn’t even feel like I was eating something awful (har har). 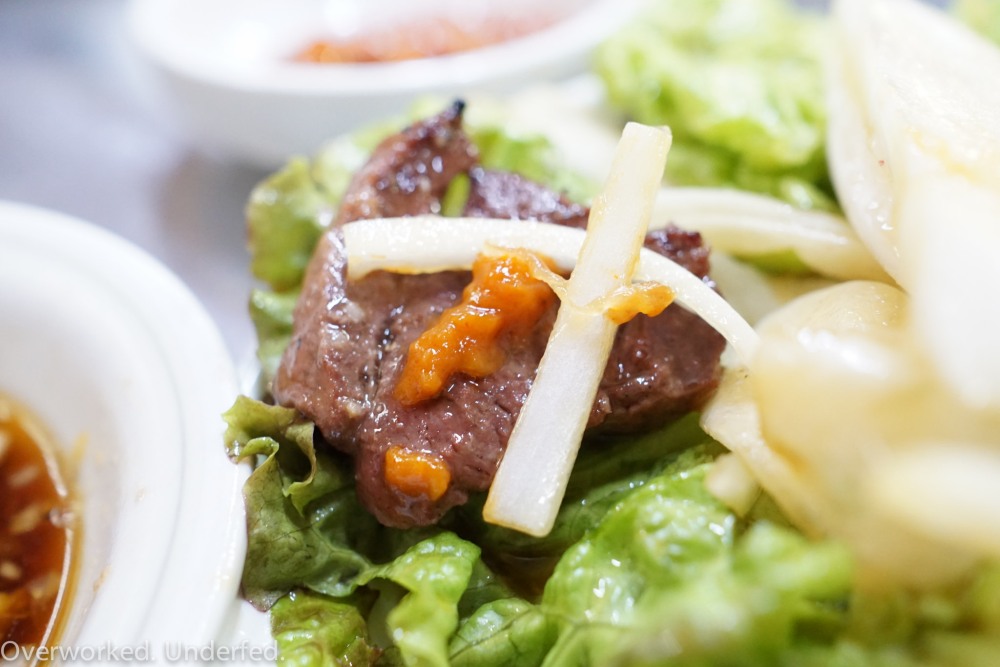 Our ajumma preparing the fried rice. 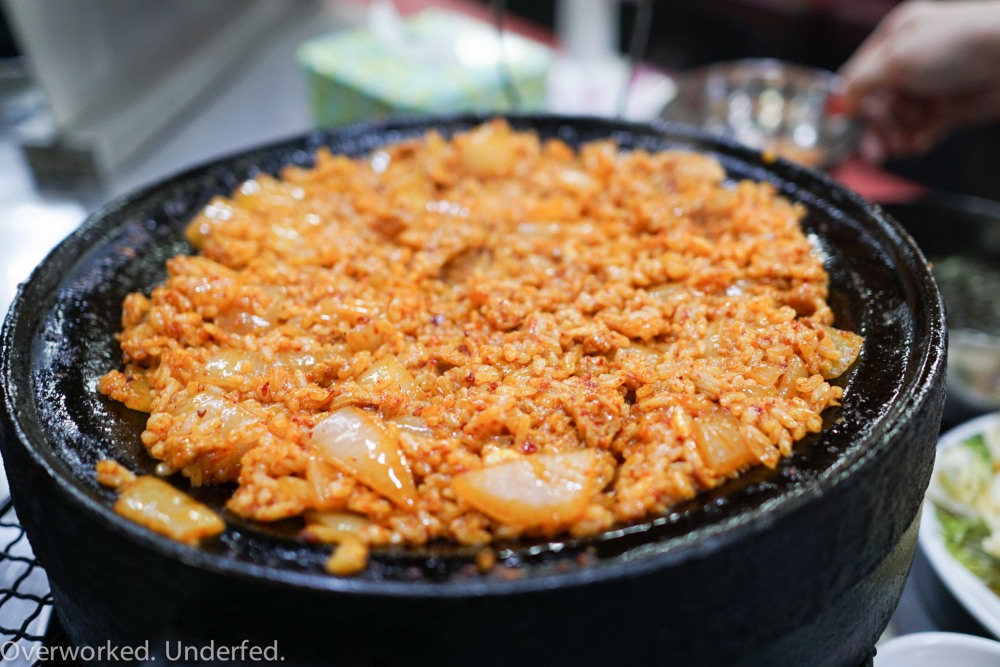 It was an awesome spicy fried rice.  It didn’t get crispy on the bottom like you would expect, but the flavors were spot on.  Considering how much garlic I saw her throw into the darn thing, it wasn’t overwhelming.  YUMS!

The offal BBQ turned out to be one of the highlights of the trip, not because it was best food ever.  It was good, but I would easily choose traditional BBQ over this.  It just surprised me because I was expecting something scary and weird, but it turned out to be tasty and a totally different experience.  Offal may not be for everyone, but I am glad I got to try it.  I can’t say The Annoyer was a fan.  I think he was way too stuffed from the morning’s overeating.  He doesn’t fair well with overeating.  I was somehow blessed with a flexible and expandable stomach.

*Not likely friendly to tourists.  No menu!