Skip to content
Killen’s BBQ
3613 E. Broadway
Pearland, TX 77581
killensbarbeque.com
Yelp
When in Rome, do as the Romans.  In Houston, they stand in long lines under the punishing sun, enveloped in the sweltering heat, with a beer in one hand, all for the promise of Killen’s BBQ.  Texas is all about the BBQ.  This line was no joke.  We got there at 10:30? or maybe later and the line was at least 50 if not 100 people deep.  That’s not counting the people hanging out in the shade while the kinder souls in the party stood in line.  Notice where I’m taking this picture from???  Bair Hugger Deluxe is such a soul.  He shooed off JW and I to get some free icy cold beer for her, and water for me, while we waited in the shade.  Once the place opened up at 11, it started moving along.  We probably sat down to eat around 12-12:30?

Finally getting my foot in the door was glorious.  Not only was I just minutes away from stuffing my face, but the blast of cold AC was godsend.  The setup at Killen’s is another cafeteria style joint.  You have your piles of BBQ meat.

You got your guy slicing the meat. 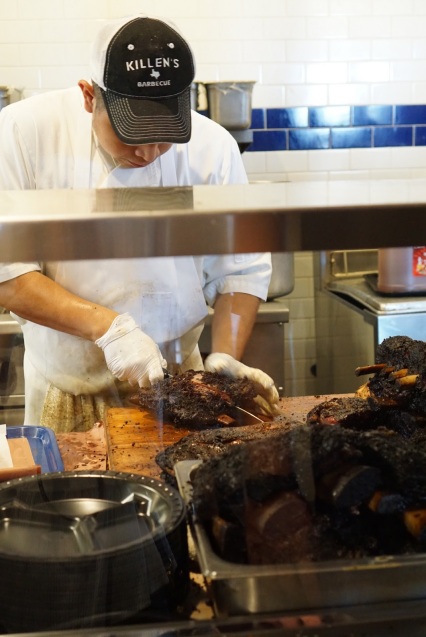 And you got another guy scooping the sides. 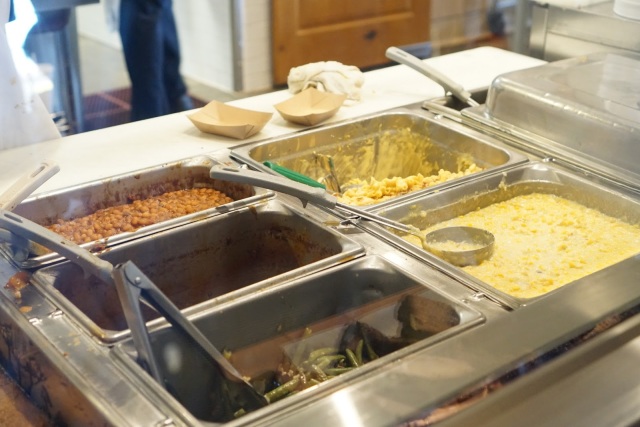 The BBQ at Killen’s is all dry rubbed I think.  Then you can douse your favorite sauce all over it, however you like.  I think we all favored the sweet sauce.  The coffee was certainly interesting.  It was deep and earthy.  Honestly, they were all very good.

Much more substantial than the ribs I had at Phil’s.

Bair Hugger Deluxe quite enjoyed this but this was the one that didn’t below.  Everything else was charred, smokey, spicy, and just dynamite.  The turkey was a little lackluster in comparison.  You can skip this one, unless you don’t eat pork or beef.  But then why are you reading this blog?  Shoo fly shoo!

My piece wasn’t as fatty as Bair Hugger’s.  This was probably too peppery for me.

I was not too excited about the sausage, but I’m glad I got to try it.  More juice next time please!

I thought the sides at Killen’s were faaaar better than at Phil’s.  Creamy and not too sweet.

I quite enjoyed the simple cheesiness here.  I hate when mac ‘n cheese congeals and hardens.  This stayed soft and creamy the whole time.

I enjoyed the beef ribs the best out of everything, just as I did at Phil’s.  That substantial beefiness just gets me everytime.

I prefer vinegary slaws over mayo-y ones.  This was bright with a lot of zing.

These might have been the best collard greens I’ve ever eaten.  That’s probably not saying much coming from me, but I just loved the tangy and bacon or ham hock scent that perfused these tender greens.  It was also nice they weren’t terrible overcooked and mushy. 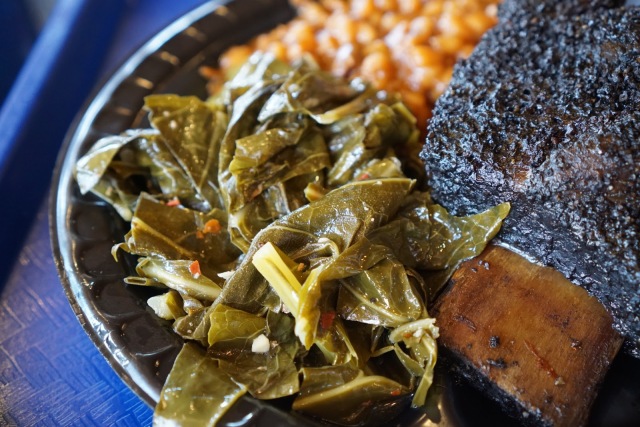 Baked Beans
Bair Hugger Deluxe said we had to get the beans.  They were good, but maybe I just don’t like baked beans.  I don’t think I liked them much at Phil’s either.  They’re just too sweet for my taste buds.

Bair Hugger was definitely right about the carrot cake.  He doesn’t like carrot cake, nor do I.  But this was the BEST DAMN carrot cake I’ve ever had.  It was super moist, but somewhat dense at the same time.  I love a dense hearty cake.  The frosting was a bit much, but was good in small quantities.  Walnuts and shreds of carrot littered the cake with textural goodness.  I’m not sure what the secret to this cake was, but you really have to try it when you come. 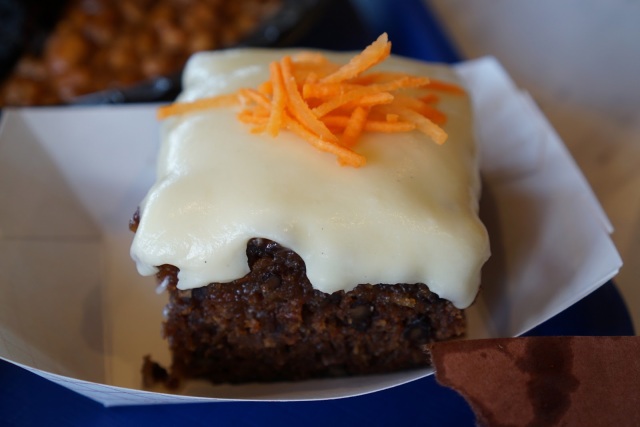 Killen’s was pretty darn good.  The style of BBQ here is certainly different than Phil’s.  The meat was more spicy, smokey, and charred, while Phil’s was more saucey and sweet.  I’m not going to say one style of BBQ is more right or better than another.  I’ll let the diehard BBQ fans debate this for centuries to come.  What I will say is Phil’s is probably palatable to the BBQ noobs like myself and Killen’s is probably good for those with a more complex palate for BBQ.  Both are great in their own right.  The sides and dessert were definitely tasty and better than anything I had at Phil’s.  I just wished you got a bigger helping than just a little paper tray full.  Everything is supposed to be bigger in Texas right?  Better hit this place up when you’re in Houston, but please bring an umbrella to protect you from that brutal sun while you wait.