Skip to content
Orange County is hurting for quality food that is NOT Asian and not part of a chain.  Food in OC can sometimes lack the imagination and quality that LA restaurants demonstrate.  There are exceptions of course, The Playground being my ultimate favorite spot in OC.  Maybe it’s no coincidence that North Left is just a block away from The Playground.  I don’t think the places are related, but the food they are churning out here is quite reminiscent of The Playground.  It is seasonal, interesting, and imaginative.  Is it the MOST interesting and imaginative food I’ve eaten or in OC?  Probably not, but I applaud what they are doing here.  Rock Dweller, Can’t Hang, Fishing Zebra Man, and Banh Mi were down to check out this relatively new establishment to hit the Downtown Santa Ana dining scene.

For once, these little guys weren’t fried!  I think I might try sauteeing them in butter like they were prepared here.  The pile of white stuff is cheese, which added a sharp savory note.  Nuts and raisins added nice texture and sweetness.  Yum.

$15 nuggets!  Expensive, but pretty darn good.  Crispy, juicy, succulent.  I think I’d like them better if they were like $10 or less.  These are probably one of their most popular items though.  It’s a pretty generous serving and would be a lot for just 2 people.

I love a good tartare that has a variety of textures and multidimensional flavors.  They achieved all of that.  It was hard to identify everything going on, but maybe that’s the key to a great tartare?  I think this was probably the most sophisticated dish, flavor wise.  The portion size was quite the difference from the nuggets.  I wanted more of this.

Can’t Hang and Fishing Zebra Man weren’t all that excited for vegetables, but I like my greens for my digestive health.  Everyone was pleasantly surprised at the tastiness factor going on here.  I wouldn’t quite give the duck a resounding A+ but it was good enough to go with everything else.  Overall, nice dish with a lovely presentation.  Everything served off a wooden board just eats better, don’t you think?

Fishing Zebra Man made it pretty clear he wanted the poutine.  Poutine in theory sounds excellent, but I can’t really recall any that have stood out.  This was good, somewhat underseasoned though.  If you didn’t order this, you wouldn’t be missing out on much, but maybe that’s just my opinion.  I can’t say the egg added much since it was pretty rich and ooey-gooey already.

I did not grow up eating oatmeal, so it’s a nasty texture to me and I can’t understand how people eat that goop for breakfast.  Here, they turned breakfast into dinner making a “risotto” out of steel cut oats.  I thought that was pretty ingenious and I’ve not seen it done before.  Some of my dining companions thought the dish was weird and preferred eating oatmeal the normal way.  To each, his/her own. 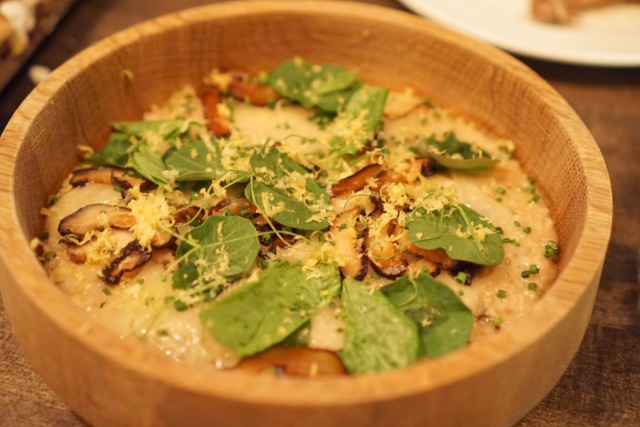 And we end the savory courses with a big bang.  The flavors were really well balanced here with the hearty meat cooked medium rare, the buttery fingerling potatoes, the fresh crunchy green beans (which might have been everyone’s favorite part because we kept raving about it), the pickled shallots.  They did a wonderful job here.  My one ding, which I really hate to bring up, though is probably really significant, is that the meat tasted kinda old?  Yeah, you would probably be up in arm and want a refund on this dish, but since every other component here was delicious I was OK.  I would still order the dish again hoping the meat was better.

Compliments of the chef.  Maybe because we, or I, looked like some serious foodies snapping pics.  Refreshing.  I think it was some sort of orange/citrus flavor. 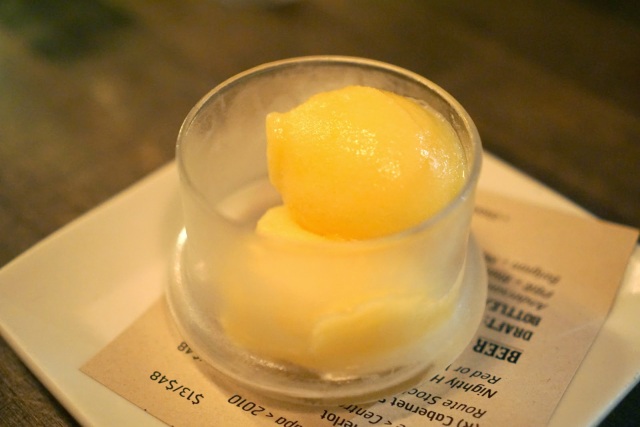 I wanted to like this dish, but the rhubarb component (the squiggly little pink things surrounding the white center) had an odd texture.  The panna cotta was definitely gingery.  I liked the housemade granola quite a bit.  There were definitely a lot of components thrown together here, but I’m not quite sure they all married well.

The bottom layer was composed of many layers of chocolate crepes, followed by a peanut butter layer, and then chocolate.  A scoop of blackberry? (tasted like cherry to me), sorbet on top.  The chocolate crepes were tasty and different, but really hard to get your spoon to cut through.  The other layers were perfectly smooth and creamy.  I generally don’t like peanut butter things, but this was good.  Fancy plating with the large negative space.

S’more What? you’re killing me Smalls

Deconstructed smores, pretty self explanatory.  The chocolate hemispheres were a bit too dense and I think chemically altered to a particular texture and to maintain their shape.  I think that detracted for the purity of just being chocolate.  Still good overall.

I was pleasantly surprised by the offerings at North Left.  You can definitely tell its some young folks running that kitchen.  The food felt inspired and contemporary.  It’s not fancy by any stretch of the imagination, but its elevated in flavor beyond most of the restaurants in OC.  The Playground still takes the cake in my book, but North Left is a great option if you’re in the area.  Fishing Zebra Man, who probably has the most well trained palate amongst the lot of my fellow diners, would probably agree with me.  I’m not sure the poutine really lived up to his expectations though.  Rock Dweller and Can’t Hang are still learning the basics of foodie-ism, but they seemed pleased with the food.