Skip to content
Before Little Sister and Dia de Campo, there was Abigaile.  I’m not sure why it took me so long to try out this place since I jumped on Little Sister and Dia de Campo straight out of the gate.  Biker-holic (formerly known as Audio Monkey) and Manicure Queen brunched it up with me at this really cool spot in Hermosa Beach.  Unlike Little Sister and Dia de Campo which are Asian and Mexican inspired respectively, the food at Abigaile is “New American.”  This is when the non-foodies contort their face to a puzzled and/or blank expression.  Their website describes it as “globally-influenced + domestically-sourced.”  Fancy schmancy verbiage for food that reflects the multi-ethnic fabric of today’s America.  No more meat, potatoes, with a side of steamed veggies here.  If you still haven’t wiped that dumb look off your face, you can keep reading.
First of all the restaurant is beautiful, with a lovely westward view toward the beach.  It’s not quite on the beach, and there are some houses and a bunch of palm trees in the way, but it sets a cool beachy ambiance.  Unlike Little Sister, the digs here are spacious.  Brunch was not crowded at all, unlike my recent experience at Canele.  The menu has good variety, and they also had a “dim sum” menu.  Is it just me, or are there more and more American restaurants with “dim sum” style dining?  We didn’t partake in anything off the “dim sum” menu, but it’s a neat concept to say the least.
Pao de Queijo brazillian ‘chewy n gooey’ cheezy poofs, whipped bacon maple butter
We was starvin’ so we got some little munchies to share.  These weren’t the best pao de queijo I’ve had, but they were fine.  The best part really was that bacon butter, smokey, sweet, and pure fat.  The pao didn’t really need this to accent it, but I slathered it on anyways.  How else was I going to get it in my mouth?  It would have been so tacky to just stick my spoon in their and go at it don’t you think? 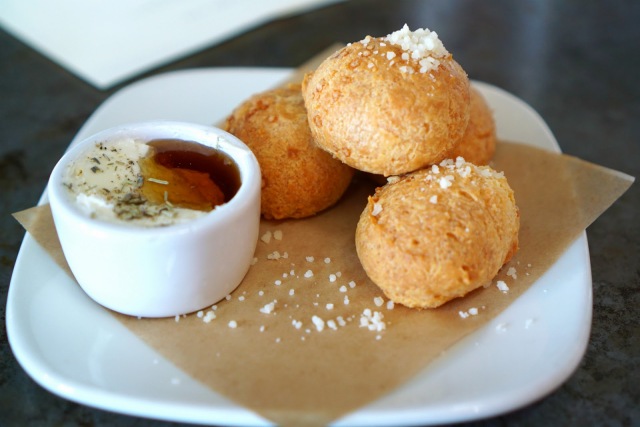 In retrospect, this was not the most interesting order.  While frickin’ delicious as all tater tots are, it was no different that the tots from my elementary school cafeteria.  We still loved them though.  Not sure what was so “roostery” with that ketchup. 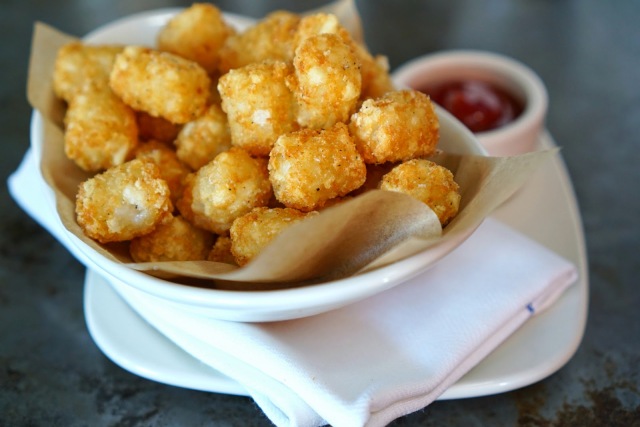 A fun interpretation of eggs benedict.  Lobster claw and tail were beer battered and fried, served on top of thick bacon and an english muffin with what was supposed to be a runny poached egg on top.  So yeah, the egg was a lazy mofo and was not running.  It was, shall we say, lightly jogging in place?  The batter could have been a tad lighter.  I LOVED the hollandaise for its very distinct lobstery flavor and wished there was a lot more of it.  The dish was slightly dry as a result.  I think this dish conceptually is a winner.  They just need to make some tweaks.  Biker-holic helped me eat half of this.  I think I overloaded on tots. 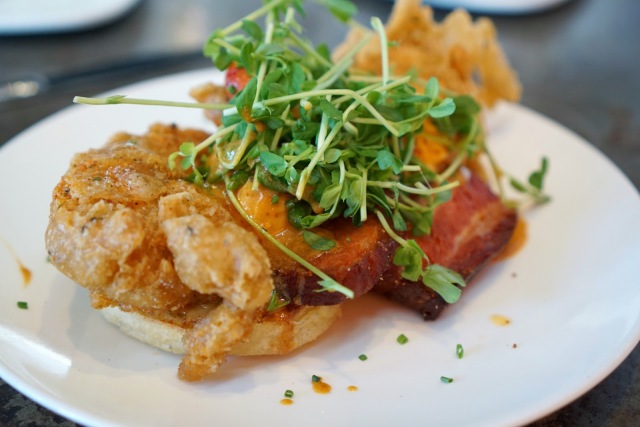 Manicure Queen enjoyed her chilaquiles.  They were solid to me. 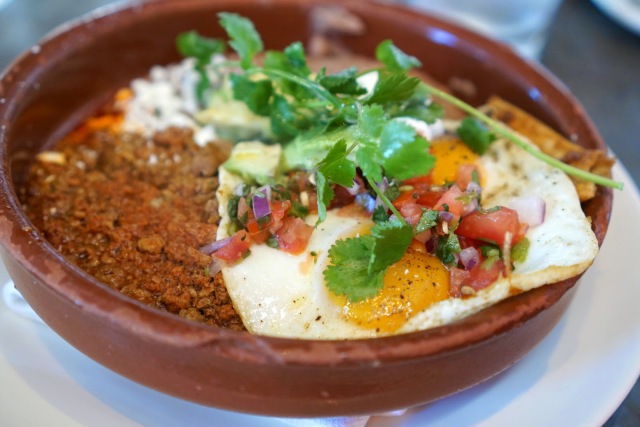 You should have seen the look on Biker-holic’s face when his dish arrived.  Disappointment over the paltry portion weeped from his slanty Korean eyes.  His dish was probably the most well balanced with regard to flavor and texture.  His eggs were certainly not as lazy as mine.

Cute Baby Girl gigantic head, squishy cheeks the size of apples, slanty korean eyes from daddy
Totally off menu item, but I give it 2 thumbs up.  Mom and Dad know how to churn out a cutie here!  Too bad she’s not smiling.  Maybe she was annoyed we were eating tots and she was just gnawing on her chubby fingers?

So as you can see, from the Brazilian pao, to your all American tots, Mexican chilaquiles, European pain perdu, New American takes influence from all over the globe.  While not every dish knocked it out of the park, I was pleased with my meal here.  I think the menu selection, ambiance, location, general inspiration of the food helped me overlook some faults in the actual food execution.  I would rank Abigaile above Dia de Campo but below Little Sister.  Overall, the team behind all 3 restaurants is, in the words of Panda Bear, “doing the right thing.”  The food they churn out is interesting and tasty.  I would come back here to try out their dinner offerings fo’ sho!