Over the years, I’ve come to love braises and stews.  In that same vein, I’ve come to appreciate the varying brown spicy mushiness of Indian food.  I guess I just like food that doesn’t require a lot of teeth to eat and enjoy.  I love food for the senile and edentulous!  I don’t think I have a very refined palate when it comes to Indian food; it mostly all tastes pretty good to me.  But Badmaash was recommended by Bruin Bear, and she’s born and bred brown.  Apparently, she knows the owners and really wanted me and some of our other friends to try this up and coming DTLA spot.  It was a sort of reunion for Care Bear, Token Bear, Bruin Bear, Derm Bear and myself.  The latter two had their husbands in tow too, Thai Bear, and ENT Bear respectively.  Yeah, it was an all bear kinda night.  We sorta ate like bears too!

Truthfully, I think I like the traditional potato samosas, but the meat one was good too. 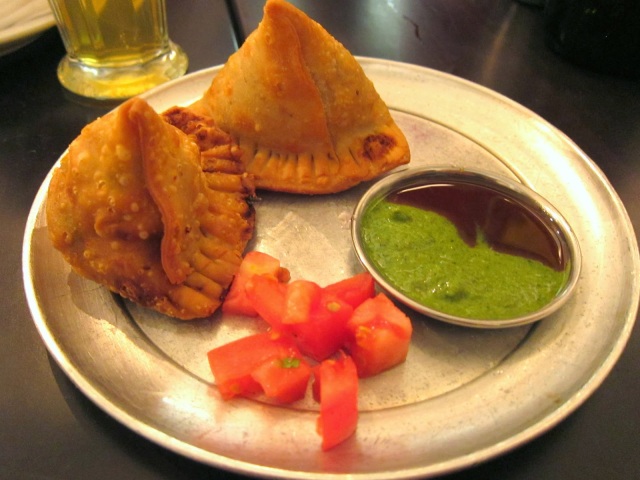 This is one of the signature dishes.  They are getting creative here combing a traditional Canadian favorite with Indian flavors.  I commend their efforts, but it just fries topped with all those things.

A couple of people were going meatless that night, so that’s why we doubled up on the fries sans dead animal.

This was another foray into East meets West.  The cheesy heavy quesadilla-like naan was counter balanced by the light cool refreshing raita.  Still though, I prefer my naan unadultered. 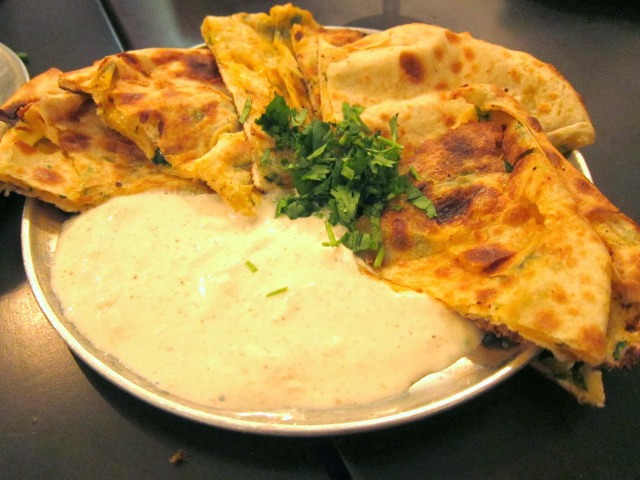 #HotSpicyIndianSausage lamb sausage, onion, mint, cilantro, mixed chilies
The real heartburn inducing food starts now.  I liked the heat and depth of flavor from the spice mix here.  You could definitely taste the lamby-ness which might be offputting for some people but I thoroughly enjoyed this dish.  I supposed the sausage was on the drier more crumbly side but I didn’t mind.  The pickled onions were a good balance.

Slow Braised Beef Short Rib dry rubbed overnight with cinnamon, red chili, tumeric, cumin, slow braised with tomato, onion
The short ribs were tender and well seasoned.  Not many beef eaters that night since there were some brown folk at the table.  You’d think I’d be happy that there would be more for me, but we ordered way too much food.

Smoked Eggplant Mash tandoor smoked eggplant mashed with caramelized onions, roasted garlic, spices
Now to proceed with the mushes.  God I love Indian brown mush.  It’s so flavorful and goes well with rice, two of my favorite qualities in any food!  Eggplant mush is especially one of my favorite vegetarian options, this was no exception.

Ghost Chili Lamb Vindaloo lamb, potato braised in spicy curry of bhoot jolokia, serrano, red chili peppers
This is a really popular dish, but its frickin’ spicy!!  The heartburn was really hitting me hard with each mouthful.

Sweet and Sour Spiced Pumpkin Punjabi diced pumpkin braised with fennel, mustard seeds, red chili pepper, mango dust
This mush had a touch of sweetness to it, which was a good change of pace from all the savory heat.  It was lovely.

Cool, smooth, not too sweet.  A nice way to end. 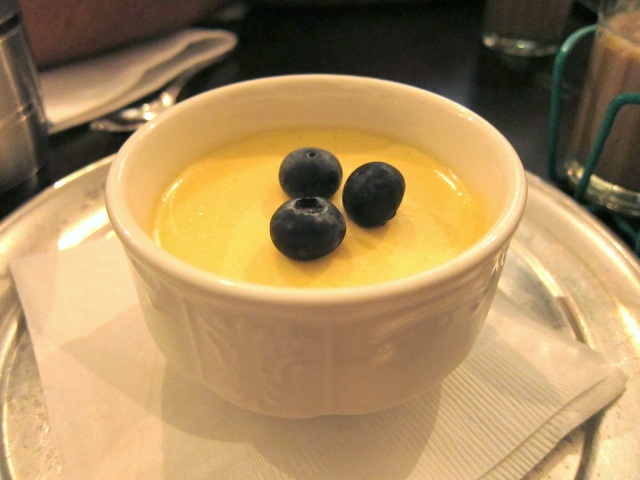 Rice Pudding
Creamy, cool, and again not too sweet.  Nothing stellar, but it was satisfying enough to end the meal this way.

I rather enjoyed Badmaash for its more traditional dishes than the more East meets West stuff.  I do commend them for trying to be all foodie, young, and hip.  I mean one of their dishes is hashtagged!  But in this day, you kind have to jump on the wagon or you’ll get left behind.  I personally don’t like feeling like I’m eating at a stuffy old restaurant whose hey day was in the ’80s.  If I’m gonna spend my money, I wanna spend it on places that are doing something new and interesting.  Badmaash is a bit out of the way for me, and isn’t something I would normally crave, so who knows if I’ll be back.  Parking in that area can be annoying too.  I believe it was authentic and tasty enough for the brown bears, so overall the Bear Gang was pretty happy.