Skip to content
When I visit a new city, I usually do my research and find all the good restaurants I want to try.  However, with NYC, I knew I wouldn’t have a lot of time aside from the planned dinners at Per Se and Eleven Madison Park.  Also, I was traveling with my family and the 3 newest additions to the H.o.P. has made life unpredictable and chaotic to say the least.  It’s a good thing The Pouter’s foodie mojo wasn’t bogged down by 3 little monsters disguising themselves as adorable squishy cutie patooties.  We brunched it up ABC Cocina because we were unable to snag a rezzie at ABC Kitchen. I wouldn’t be able to tell you the difference between the two restaurants, which are literally attached to each and separated by glass windows and doors.  All I know is that they are both restaurants from famed chef Jean-Georges Vongerichten and ABC Cocina has a latin flare.Bread

We were starvin’ like Marvin and noshed hard on the bread. 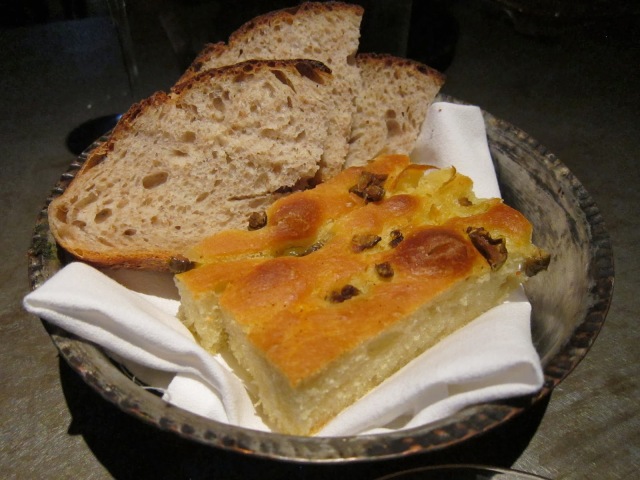 I think if there were one food I couldn’t live without in this world, it would be the tomato.  It’s not like I eat tomatoes everyday.  For the most part, they are usually hothouse grown tasteless excuses for food.  But when they are the sun ripened bounty of a warm summer….I need not say more.  I think my LOVE for this dish was magnified by my pre-existing penchant for tomatoes because it was in fact a really simple salad.  I wish I could eat this everyday. 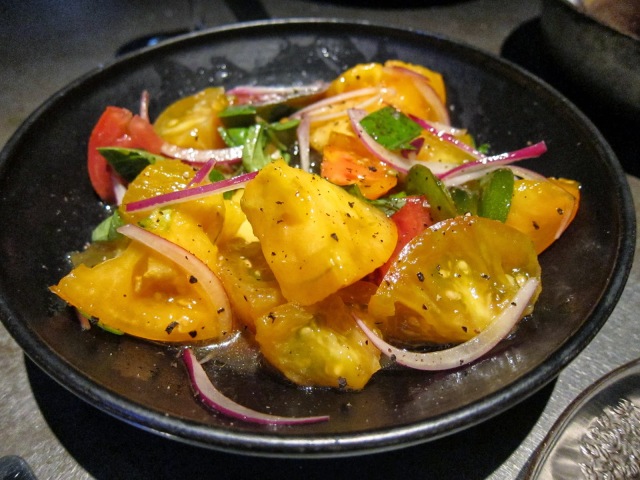 Another food I love is shrimp, and this only added to my happiness.

The flavor profiles here were quite similar to the tomato salad, so I was enamored.  The calamari were tender and stuffed with meaty spicy sausage.  The tomatoes and chickpeas delivered excellent balance.

Now the dishes started to get heavier.  These were fried delectable balls of crab and corn with a creamy mayo dipping sauce.  These were a 180 from the prior tangy refreshing dishes.

The dough was flaky, while the filling was a nice change from the usually dry meaty fillings I’ve had in empanadas.  The tomato jam was needed to add some punch.  Or maybe that’s just my love for tomatoes kicking in?

Oh what a marvelous sandwich.  Tender roasted pork with so many layers of flavor from the watercress, radishes, whatever the heck sauce was used, and the fat from the pork really bringing it all together.

This has got to be ONE OF THE BEST desserts I’ve had all year.  It might even be better than the milk ice cream at Per Se and the corn panna cotta at Incanto.  It was just such an indescribable texture, kind of like a lumpy cheesecake.  That makes it sound so unappetizing.  And then the flavor had this sweet cheesiness, which also doesn’t sound delicious.  Trust me when I say it, it was motherf@&*@$%^ AMAZING.  I can’t pinpoint what made it so spectacular but The Pouter and her friend were definitely huge fans like me.

I was definitely really really happy with the food at ABC Cocina.  Everything was perfectly executed and soo tasty.  I can’t even say any one dish faltered.  I loved them all.  I suppose I’m not the biggest fan of empanadas, but still I liked the version here.  I was quite surprised by the caliber of the food here because I had gotten the sense that Jean-Georges was just one of those big celebrity chefs that no longer churn out quality food, rather than multiple restaurants under a ever expansive brand like Bobby Flay and Tom Colicchio.  It seems like he has restaurants at multiple resorts spanning the globe.  How can he possibly control the quality of the food that represents him and his brand?  Whoever is actually running the show at ABC Cocina needs his own cocina!