Welcome to the first post of 2013!  I apologize for my long absence from the blogosphere.  It’s not that I have lost interest in blogging or am no longer into food documentation.  I’ve simply NOT eaten out at any new interesting places, nor have I cooked anything new or notable.  I guess I’ve been in a food rut. I have also learned that when you’re in a food rut, it’s really easy to lose weight!  All that poppycock about diet and exercise being the key to weight loss?  No friends, just DON’T EAT and you’ll lose weight.  Americans eat too much and we have no self control, plain and simple, but this is a whole other conversation for a whole other type of blog.  I’ll get off my soap box now.

The holidays brought me back home to The OC, and back to some old friends Soprano Man and Teety.    Soprano Man was so kind enough to drive down from Riverside to meet up with Teety, Dumpling Man, and I in Santa Ana.  Boy was dinner such an amazing surprise since New American cuisine in OC is pretty unimpressive if not nonexistent.  I had heard they have secret foie dishes here, but after being interrogated and asked if I was a cop, the waiter told us they had no more “special bread” that night.  Maybe next time?

This was a fantastic way to start off.  Although it looks like a glistening pile of dead weeds, this was actually an intensely flavored almost warm salad of charred brussels and luscious potatoes.  The vinaigrette was so spot on.  The table was hands down in love with this dish.

Everyone loves buratta, and it was fresh and creamy here.  It was an interesting pairing with the varying citrus fruits but it was no match for the deliciousness of the brussels.

Teety suggested the radishes.  It was refreshing and provided varying textures of crunch from all the different veggies and just a lightly sweet tangy from either the dressing or pickling, I couldn’t tell.

I apologize for the blur.  The food was coming out so quickly and it was getting a bit hairy trying to snap a quick photo before my dining companions descended voraciously with their grubby mitts and greasy forks.  The dish was certainly more monochromatic than the previous 2, but don’t be fooled.  It was still a tasty concoction of things we don’t normally eat, sunchokes and harissa. 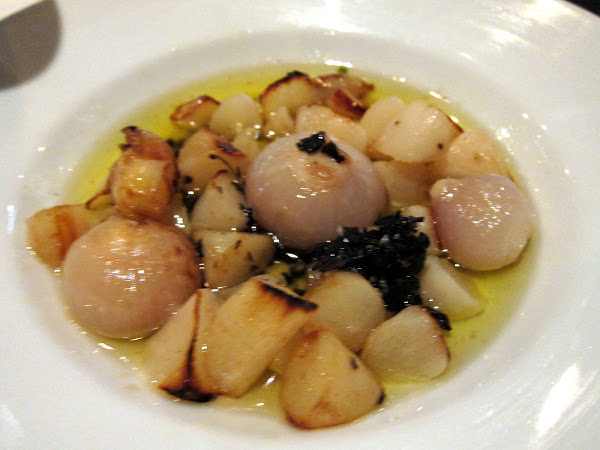 The mushrooms were earthy and roasted to just the right amount of crisp, surprising really when you think of mushrooms which tend to be soft.  The slow egg provided another layer of runny fatty goodness.  Another solid vegetable starter.

I only now know why Soprano Man wasn’t touching this dish.  He doesn’t eat raw stuff!  Not a huge loss since this dish was probably the most uninteresting least mouth tantalizing dish of the night.  But that’s not to say the dish was bad.  Heavens no!  Seriously, we were all thinking The Playground could do NO wrong by this point.

I’m not sure why the ramen was named this way, but it was definitely a solid effort.  The broth had a wonderful umami to it.  The noodles were al dente and fresh.  The best part though was the pork belly. It was falling apart tender, but must have been pan fried before serving cuz some of the parts of fat were oh so crispy and rendered to perfection. 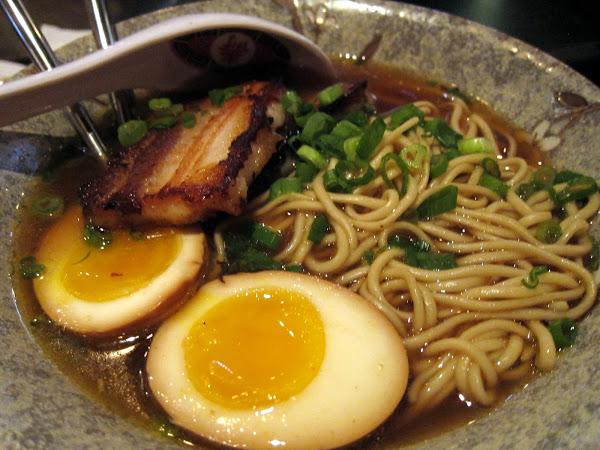 I think the table was as impressed with this dish as it was with the brussels sprouts.  The steak was a perfect medium rare, but all the Thai spiced accoutrements is what really kicked things up.  I loved the salty fishiness, the crunchy peanuts, the sweet fried shallots, the

The mussels were plump and juicy and were swathed in a delicious broth with just a touch of cream.  Teety was drinking the broth like it was water and I’m pretty sure his lactose intolerant ass paid for it later, if ya know what I mean.

Being from the South, Soprano Man knows a thing or two about fried chicken and he was NOT a fan of the version here.  Sure it wasn’t the crispiest, and the white meat was pretty dry, but if you could get over the extremely vinegary aspect and got a piece of the dark meat, well then it wasn’t really so bad.  Teety and Dumpling Man thought it was passable.  I probably wouldn’t order this again, but this dish still gets credit over the albacore sashimi because it was more different.  Can’t say I’ve had fried chicken like Uncle Lou’s. 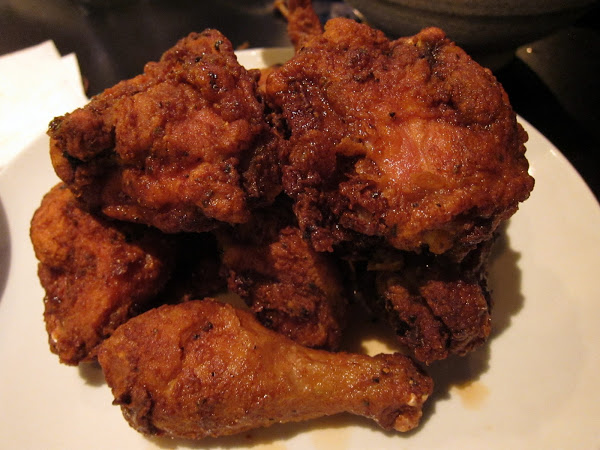 So after that first round of food, we were all scoffing at our server for having said that would be a lot of food for even very hungry people.  We honestly did not feel that stuffed so we ordered 32 oz of bone in porky goodness.  Our jaws dropped when it came to the table.  It wasn’t as ginormous as Teety’s head, but certainly as large as a small child’s head.  Being that large, I was afraid it would be dry, but DAYAM was it JUICY and oozing so much flavor.  It had to have been brined because I can’t believe such a large piece of meat, let alone pork, could be imbued with so much natural flavor.  The exterior was sweet with caramelized maple.  It was really really good.  Sadly, we couldn’t finish it.

The texture of that chocolate dome was a bit too stiff and over gelatinized or whatever they used.  It was just ok. 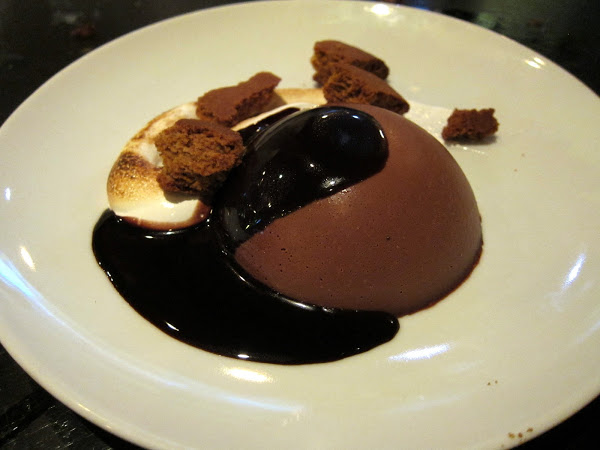 I think everyone liked the pudding better.  It was sticky, sweet, salty, and warm.  Hard to go wrong.  I think I would have liked it better if it wasn’t fig but maybe some other fruit.  This certainly need a cup of milk, coffee, or tea to help cut the sweetness. 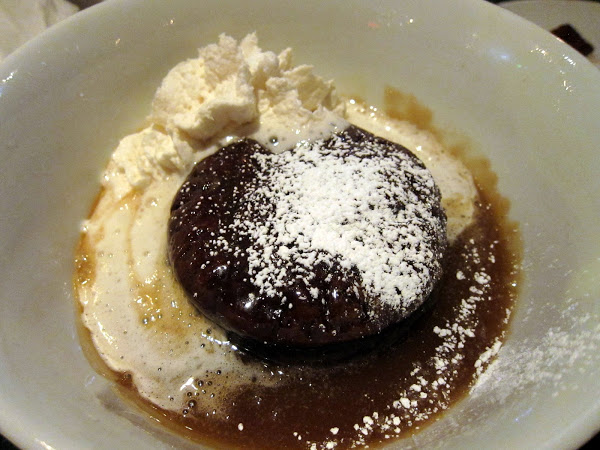 I’m not sure if it’s just because I haven’t had anything really great in a while, or because it’s just located in Orange Country, but The Playground really was incredibly impressive.  Our server was knowledgeable and cool.  The food was fresh and innovative.  Execution and flavors were spot on.  The menu has great variety.  I heard it changes seasonally which is such a plus for Orange County spots which can be so franchise-y and stale.  I am definitely going to be back.  I heard the chef can set up some special tasting for you if you give him enough notice.  I wish there were more restaurants like The Playground in Orange County.  Most of all, it was great meeting up with Teety and Soprano Man. It makes me miss my days in LA, eating and laughing up a storm with those guys back in the day.