Skip to content
Our last trip to Chicago was really highlighted by some of the most delicious food I’ve eaten in a long time.  This trip back was no exception.  Alinea was probably the stand out restaurant last time for its sheer creativity.  It’s sister restaurant, Next, managed to wow us again.  Now if you haven’t heard, both restaurants now work on a ticketing system, sort of like buying tickets to a musical or a concert.  You buy them, and then you’re stuck with them.  NO REFUNDS.  I guess restaurants lose money on last minute cancelled reservations, no shows, and having to staff someone to and take phone calls and manage the reservations.  I’ll admit, I am guilty of making last minute cancellations but I’m a customer and I can do as I please, right?  Grant Achatz (chef/owner) says, “screw you.”  I didn’t actually think I was going to get a spot at Next, but tickets for Kyoto opened up just a day or two before my trip and BOOM, I was so there!  It helps to be friends with Next on Facebook!
I think I’m too dumb to really appreciate the cerebral experience Grant Achatz is trying to create in all his restaurants.  There was this teeny scroll explaining the theme of the dinner.  All I got from it was fall, Kyoto, tradition, experience.  The rest of it was just too many words.  These days, I can only communicate in abbreviations (CAD, HTN, SDH, ARF, etc).
Kaiseki traditional multicourse Japanese dinner (12 to be exact!)

We started off very gently with some simple corn stock.  It was very sweet, very clean tasting corn.  Imagine the juice that comes with canned corn.  It tasted just like that!

When you arrive, what you think to be just a centerpiece plays a role in a course.  These wasn’t just some dried weeds, but rather hay.

It was lit on fire to fill our table with the smokiness of a campfire!

We were engulfed in a warm aroma of smoking hay.  It really did make us feel like fall was near.  The purple looking cube was sort of a chestnut paste/puree.  It was delicately sweet.  The crisp apples provided a nice tart contrast, while the miso apple butter was salty sweet.

This was a series of small bites meant to mimic the landscape and colors of autumn. 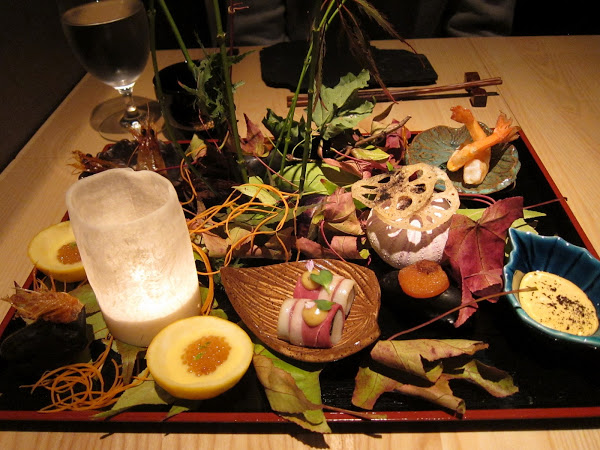 My audio recording cut out for some reason so the descriptions here are sparse.  From what I remember, there was a lot of contrast here with the sweet corn, the salty roe, and the citrus lemon rind which cleverly served as a little bowl.

I can’t remember what sort of meat this was, but it was something cured, wrapped around a radish.

Not sure what this sauce was meant for, but it was mayo-y and fishy at the same time.  Very tasty.

I made a point of licking the grape seed ash to see if it had any flavor and it did not.  Nothing special going on here. 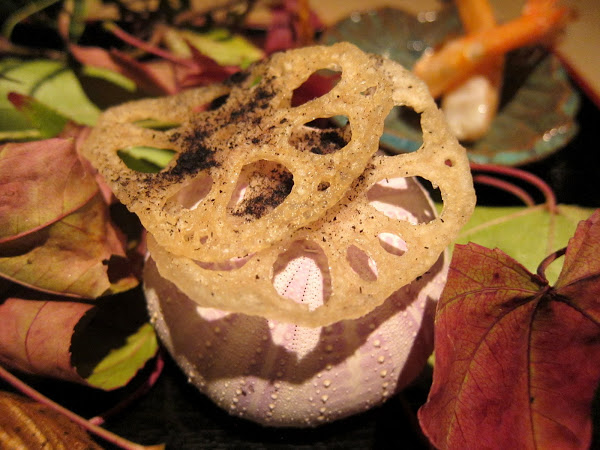 I usually don’t eat the head, eye balls and all, but suck out the brains, but I just popped the whole thing in my mouth not wanting any bit go to waste.  Who knew it actually takes talent to fry a shrimp head?

Not sure what this was, but it was just ok.

Madai, or red seabreem snapper, was delicious.  The salmon was fresh and very clean.  The kanpachi just added another dimension of classic simple sashimi flavors.  That soy sauce was some of the best around too!  It was packed with umami.  Surprisingly, the green shiso leaf emulsion was not overwhelmingly herby and it really brought some brightness.

The red abalone was what you would expect of abalone, a firm meaty texture that was just lightly seasoned with soy and sweetness.  It’s liver was pretty soft and surprisingly clean.  The tiger abalone was the weirdest one, I think it was made into noodles.  It wasn’t that good.  The most unappetizing part the red sea grapes which looked like a mini version of the big seaweed you see floating in the ocean.  It was just salty and weird.  This was probably the least successful dish of the night.

I’ve never had eel this way and it was very soft, like a moist flaky white fish.  The dashi was a notable sweet umami.  It wasn’t as tasty as the dashi I had at Alinea.  It was a homey comforting course.

I love the smooth silky texture of a good chawanmushi and this was no exception.  I’m not sure I really could taste the flavors of matsutake mushrooms though.  It was a little one note after many bites.

While we slurped on eggy custard, the scent of pine wafted around us, again reminding us of the earthy aromas of fall. 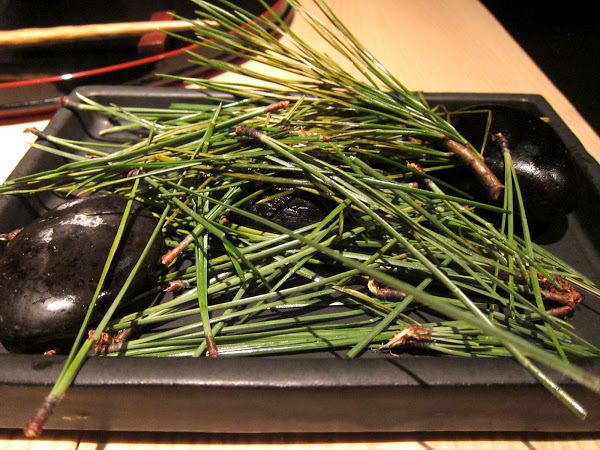 This next dish is probably one of my 2 favorites of the night.  Ayu is a river fish in Kyoto, whose flesh has a distinctive sweet flavor, like a watermelon we were told.  It was definitely sweet and juicy but not much like any melon I’ve ever had.  The skin was just the slightest bit crispy with some damn yummy flesh.  It was the best meat on a stick I’ve ever had!

The best part was crispy fried bones of the fish! 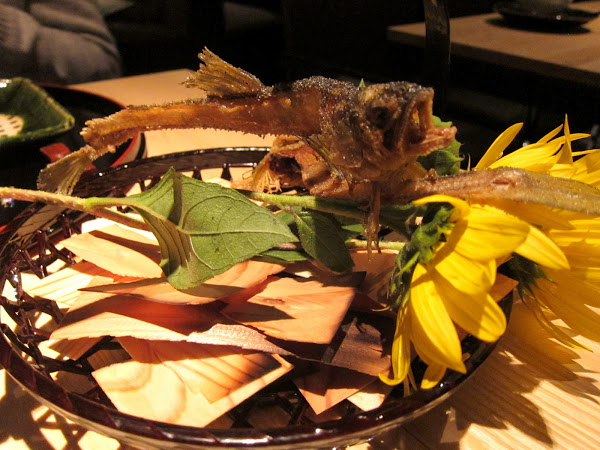 This was their version of tempura, except the oyster leaf.  I had this at Alinea too, but I wasn’t as struck by the canny similarity in taste to a real oyster then, as I was this time around.  I’m not sure what kind of oil or tempura batter they use, but it was a darn tasty tempura offering.  Again, something very simple just done very well.

To finish off the last of the savory course, was a beautiful presentation of cold smoked Wagyu with thinly shaved daikon and a delicious red miso broth served tableside.  This was my 2nd favorite dish. 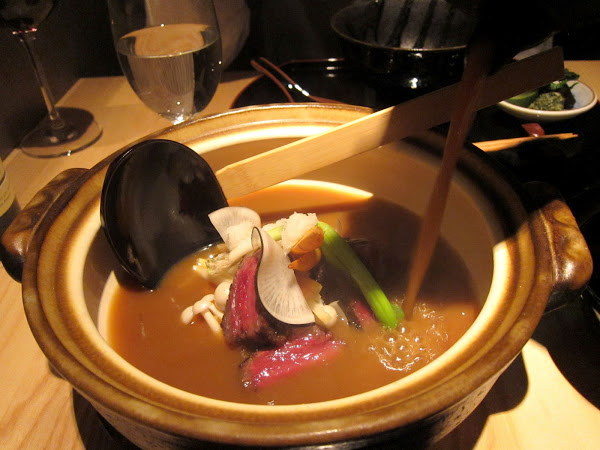 The Wagyu was pretty rare, but this was probably intentional because it cooked a little more with the miso.  Everything about this course was spot on, even the freakin’ rice!  It was just plain white rice but it was really good!  Not too hard, not too mushy.  I was betting there were a bunch of Zojirushi rice cookers in the kitchen.

The pickled veggies just rounded out the course.  Seriously, it was a dish you would find yourself eating at someone’s house in Japan.  So simple, but so good.

Dumpling Man and I shared a wine pairing, and they were quite generous with the pours.  By this time I was so drunk that I forgot to take a picture of this course!  I was very sad, but the dessert wasn’t that good.

No Japanese meal is complete without some warm green tea.  The little lump next to it is finely ground warrabe bean paste rolled in sweet soy beans.  I’m not a huge fan of mochi unless its filled with ice cream or on top of yogurt.  I appreciated the very simple and classic finish to the meal though.

All in all, I was very happy with my meal at Next.  It was very very simple, but I think there is greatness in the perfect execution of a meal with no frills.  Nothing was “wowza” or “knock my socks off amazing” like at Alinea, but everything was just spot on and so authentic.  I’m not quite sure what commands the $125 per person price tag, aside from the Wagyu and maybe the ayu, but I do understand that what you’re paying for at Next and even Alinea is not just great food, but an unforgettable experience.  Maybe Chef Achatz has it right, maybe eating food like this really is a show that deserves the respect of no last minute cancellations or no-shows.  I guess the ticket system is the right way to go.  I love Alinea and Next so much, I would consider flying back to Chicago once a year just to eat here and see what new things Chef Achatz imagines up NEXT.