You know how they post those warming signs on big rollercoasters, “If you have a heart condition or a seizure disorder, do not get on this ride.”   They should post a sign like that outside of Animal.  “Those with known coronary artery disease or coronary artery disease risk equivalents should not dine at this establishment.”   This place is unabashedly carnivorous.  And what is meat’s best friend, but fat?  Some places you go for “meat and potatoes,” but this place is a “meat and fat” type of place.  Ok, enough!  Because I think I’m scaring everyone, but I’m just being frank.  Don’t bother coming here if you’re not ready to indulge. 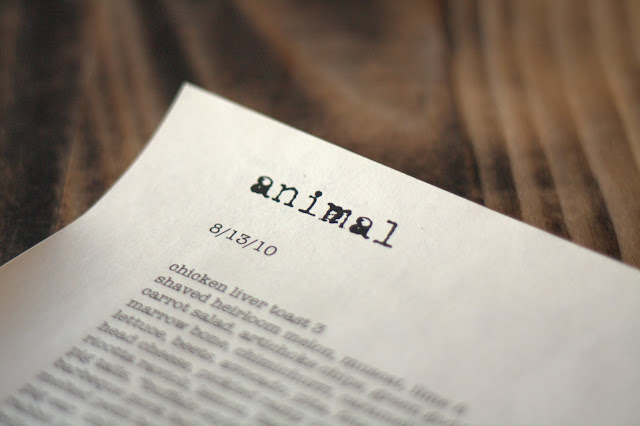 Triple T, Triple F, Running Man, Smooth Obturator, and I were all ready to do just that.

A deLIGHTful way to start off the meal.  It was lightly dressed in a creamy dressing.  The feta was probably my least favorite part, but you can’t go wrong with the sweet freshness of beets. 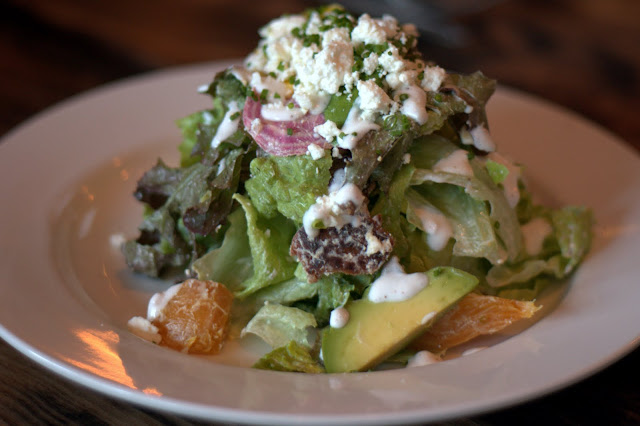 Another refreshing dish of light and bright flavors.  The hamachi was delicate and fresh.  It played off of the varying levels of crunch from the tostada shell, cabbage, and fried onions.  The fish sauce vinaigrette was pungent and punchy.  I really liked it. 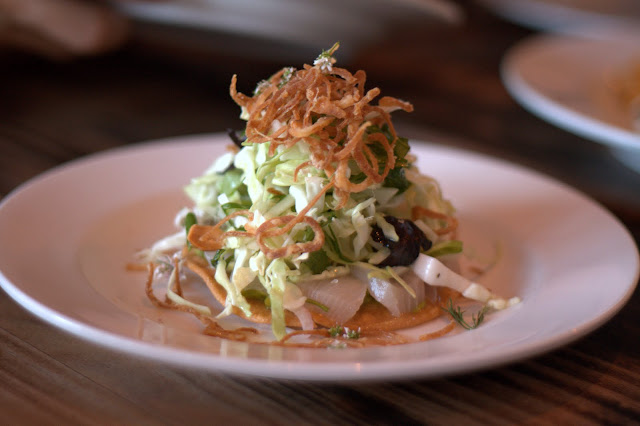 I love pate.  Maybe it’s a Vietnamese thing because that’s almost the best part of a Vietnamese sandwich, the healthy slathering of fatty pate.  Of course these days, I definitely appreciate the finer quality preparations.  The wonderfully smooth texture and flavor went well with the sweet marmalade on top.  It was good to share this dish, as it was all the other dishes. 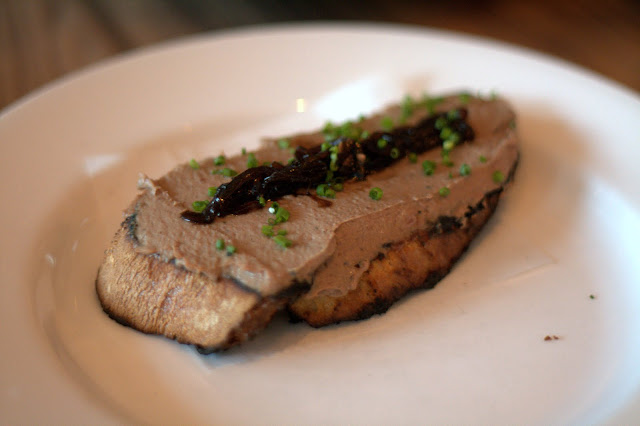 This was probably my least favorite dish of the night.  Everywhere you  go, there’s octopus, and it’s always charred to death.  This octopus was too tender.  I like my eight-legged friends to bite back at me.  The different components of chorizo and chow chow didn’t really meld well together in this dish. 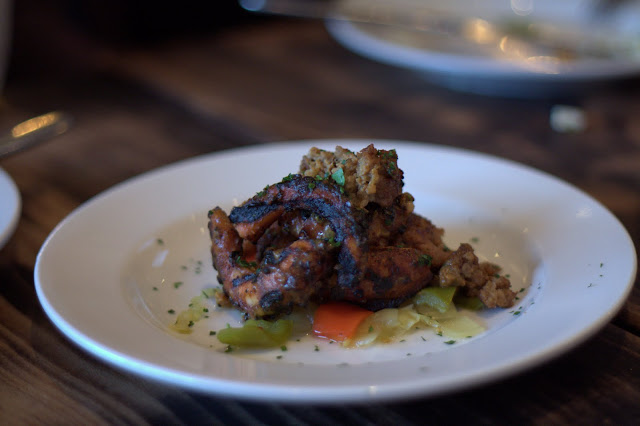 Derricious!  This was definitely a different take with bone marrow, serving it with the Argentinian sauce, chimichurri.  I think the bite I got had more chimichurri than caramelized onions because all I tasted was a lot of tang.  The last time I had it, I really liked it.  So we’ll chalk it up to sampling error.  The thick cut, lightly grilled hunks of buttered toast were a welcome change from the usually thin baguette slices. 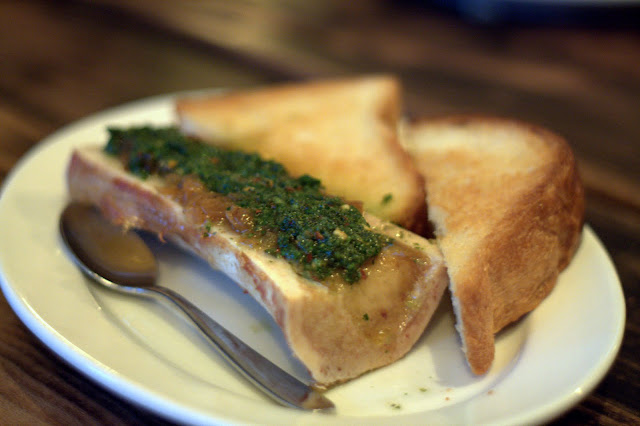 We were all surprised when this dish came, because we thought we ordered the Foie Gras Loco Moco.  We didn’t argue and decided to dive in anyways. Boy were we glad they made a mistake because this dish was AWESOME!  One of the best things I’ve ever eaten.  The foie was cooked with to a crisp on the outside, but melting of fat on the inside.  It sat atop a warm flakey biscuit that was another oxymoron of textures.  It was slightly flakey on the outside, but soo moist and soft on the inside.  Amidst all of these revolving textures was a meaty creamy gravey.   The dish was just so rich and decadent.  We were all in love. 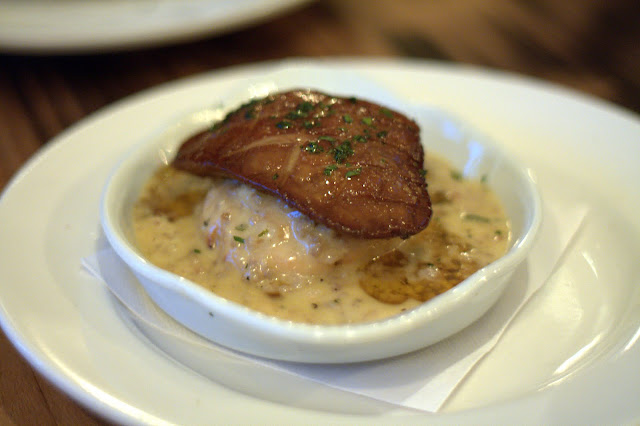 What’s up with sweetbreads tasting like strange chicken nuggets?  Somehow I still don’t like them thaaat much.  The capers really brought a lemony taste to the sauce which I think was supposed to balance out the deep fried goodness of the sweetbreads but it was too sour for me. 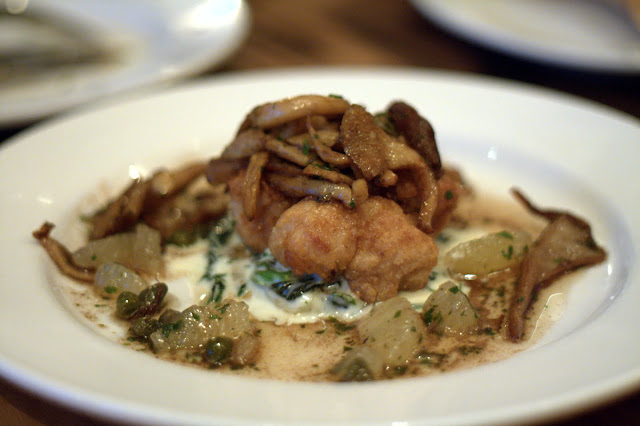 When you’re married to a foreigner, you should learn to embrace the culture from which they come.  Smooth Obturator likes to do this for Triple T, mostly when it comes to food of the fattiest nature, that even she does not embrace.   Neither Smooth Obturator nor I have have had an original poutine, so we’re not sure how this compares.  I think its usually just gravy, but this was more like a hearty oxtail stew generously spooned atop a mound of french fries.  We all felt it was too salty.  Last time it wasn’t overseasoned like that and was much more palatable.  I dig the re-invention, but would probably not order this again. 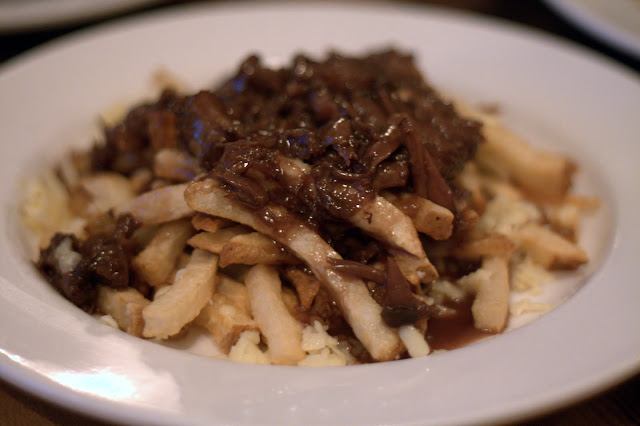 This and the foie gras biscuit are tied for most favorite dish of the night. I told everyone this dish was soooo good and that we should not cheat anyone out of a generous tasting.  It’s a sandwich that elicits an “Uhhh, this is soo good” in between mouthfuls. The pork belly had the right crispiness on the outside but the falling apart fatiness within. It was sauced to perfection and the slaw attempted to balance things out but it too was slathered in its own dressing. Everything was soaked up by the bakery soft buns. After this, I was SO FULL. 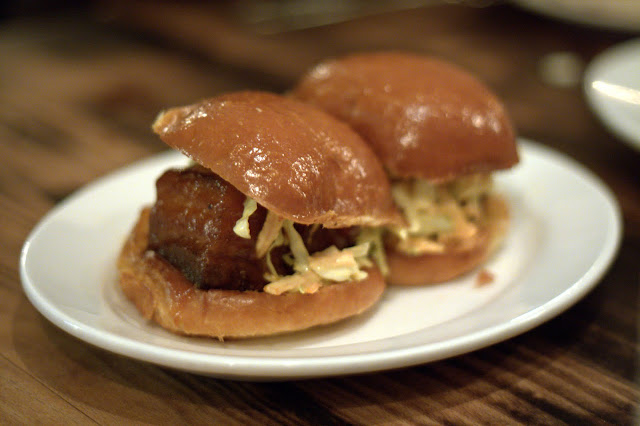 I barely had any of this for fear my stomach would explode. A similar sentiment was felt around the table. I can’t say much about that dish except that I probably would not order it again because there are so many other smaller dishes to try and this is one of the bigger dishes that really takes up precious stomach real estate. Everyone felt the truffle sauce, while incredibly flavorful, was a bit overwhelming. The potatoes were roasted to perfection and soaked up some good flavor from the steak. 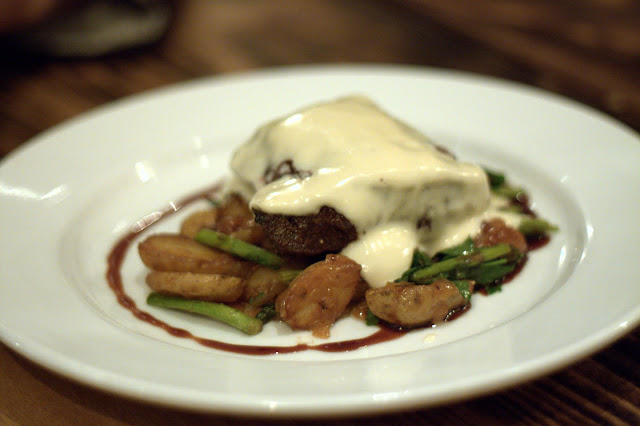 We were all rolling over in our seats from the decadence-induced coma.  We were praying they in fact made a mistake and gave us the foie gras biscuit INSTEAD OF and not IN ADDITION to the foie gras loco moco.   Fortunately, the flank steak was the last entree.  We were so relieved to find out the meal was in fact over.  Hooray!  We made it to the end alive!

Bacon is another “it” protein. It’s worked its way into all meals of the day, and all parts of a meal. It’s amazing how well it works in desserts! This was no exception. It seems like an ordinary chocolate bar, but it has bits of bacon crumble on top that add a contrasting smokey sweetness. Props for the innovation. Bigger props for tasting good! 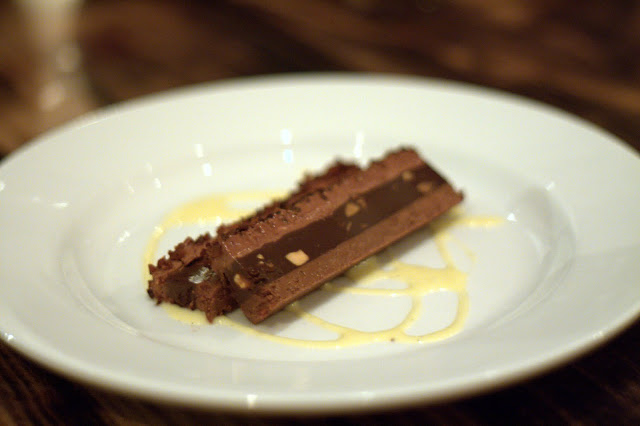 Animal is restaurant like no other.  No where can you go and have a meal, so unforgivingly heavy, rich, and decadent, that does not get weighed down by its own strong flavors.   I highly recommend this place if you’re ready to feast and gain a few pounds in just one sitting.  It is definitely a great place to bring some out of town visitors for a unique LA dining experience too.   There really is no healthy reason for me to go back here unless I’m taking some people here to try for the first time.   So let me know if you’d like to go!  I’ll make that ultimate sacrifice just for YOU, as your good friend *wink wink*