I’m a Yelp snob. I am hesistant to try a new restaurant unless it has great reviews/ratings on Yelp. There are always exceptions of course. Anyways, I had heard about Lemonade some time ago through Blackboard Eats (a great foodie 411 for those who want to be in-the-know). I had no intention of trying the place until months had passed and Lemonade accrued quit a fan base on Yelp.

The place is a great for lunch, especially in the warm sunny months because it has a great deck with outdoor dining. They serve several varieties of salads, sandwiches, and stews. The place is reminiscent of Clementines, but with a brighter feel and a larger selection of salads. They don’t have as many sandwich choices, but the stews really make up for it. Dumpling Man looooooooooooovvvvees stews almost as much as he loves dumplings. The other great thing about this place is that you can sample anything you want. From a chunk of beef from the stew or a bit of the salads.

But first off, the lemonades! I think they’re all a tad bit too sweet and tart and for that reason taste like they were made from a mix, just not as fresh as I would imagine. I really enjoy the concept though, with all the many interesting flavors.

Cucumber Mint Lemonade. Probably my favorite one. You can’t go wrong with a bit of mint essence in your lemony sweet drink. It’s like a mojito without the alcohol. The cucumber flavor also adds another dimension of freshness. 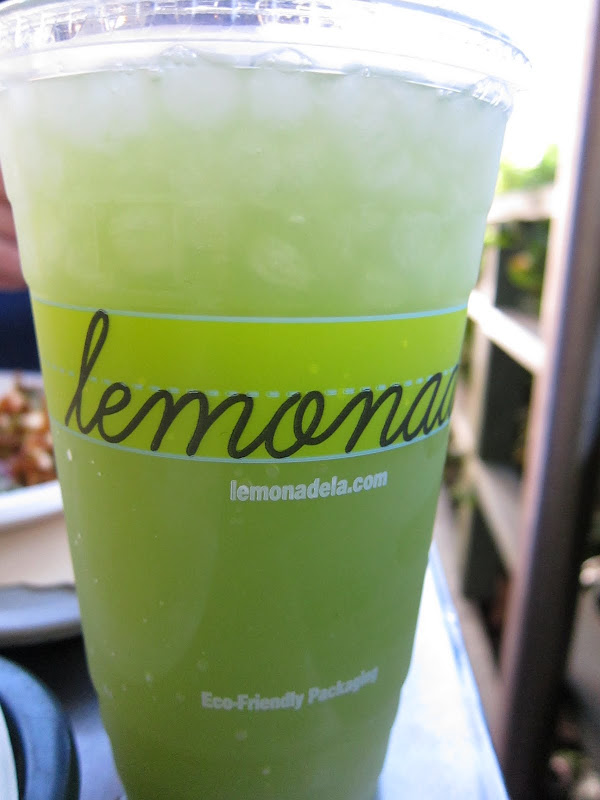 Peach Ginger Lemonade. I love ginger being incorporated into sweets. This had just a subtle ginger hint and the peach? I wouldn’t have known it were there except for the color. My second favorite. 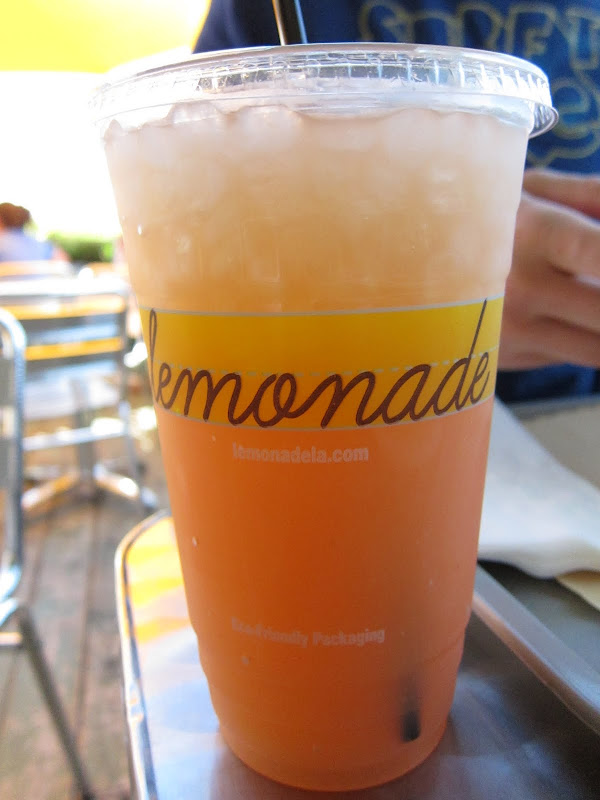 Blueberry Mint. The mint taste was not as prominent because it was not as well complimented with the blueberry as with the cucumber. This drink was especially tarty, which was too much sweetness for me. 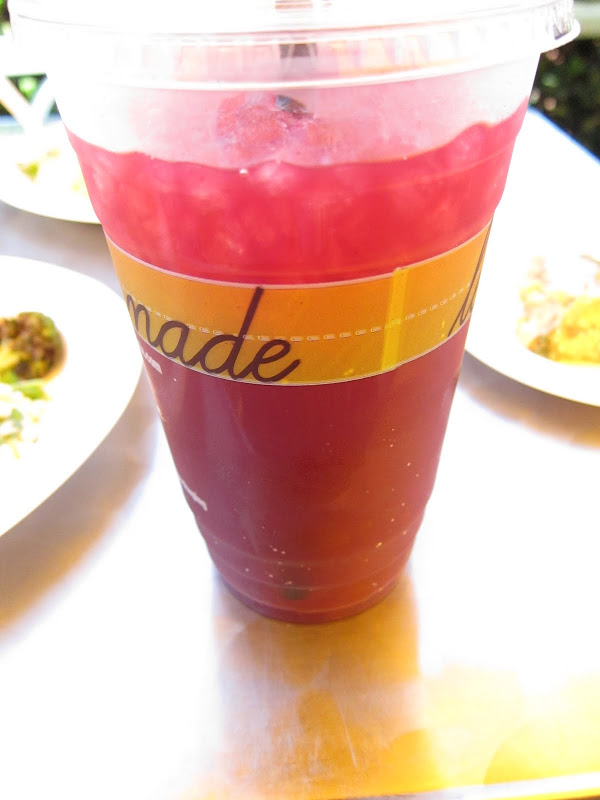 Here is just a sampling of the different salads (starting from upper left and moving clockwise):

Israeli couscous, wild mushrooms, parmesan, lemon truffle – I’m a fan of israeli couscous, which is definitely different than normal couscous which has a finer texture. This tasted like small pasta balls. The mushrooms in here had an amazingly concentrated flavor, it was soo good! Definitely my favorite salad

Cauliflower, golden raisins, almonds, curry – You will find this anywhere, and it tastes pretty solid, except I don’t like raisins 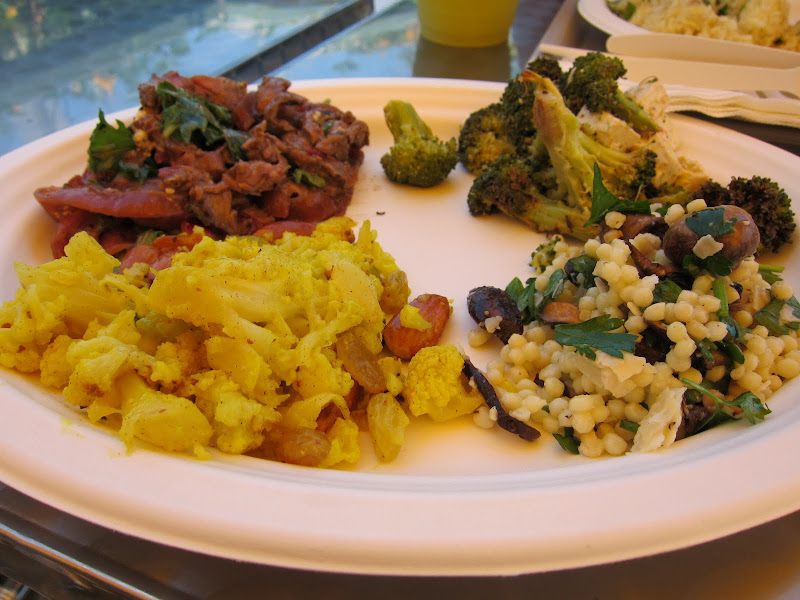 Green tomatoes, sweet corn, pepitas, ancho chili – We love corn salad, but this was more tomato than corn salad. The green tomatoes were soo sour and it was not balanced with enough corn. 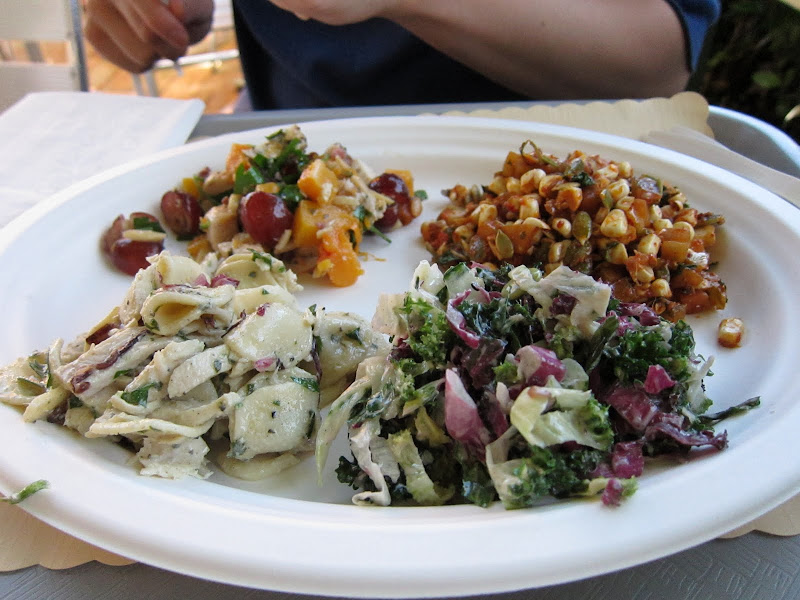 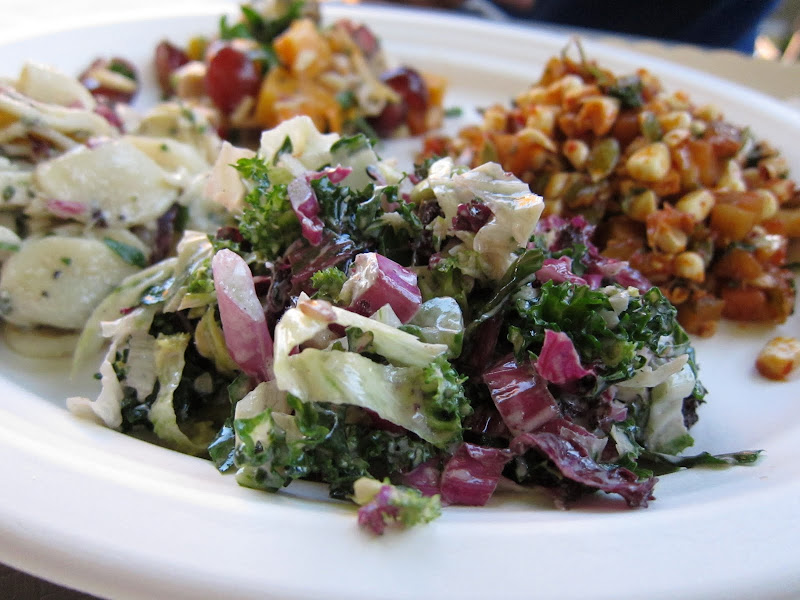 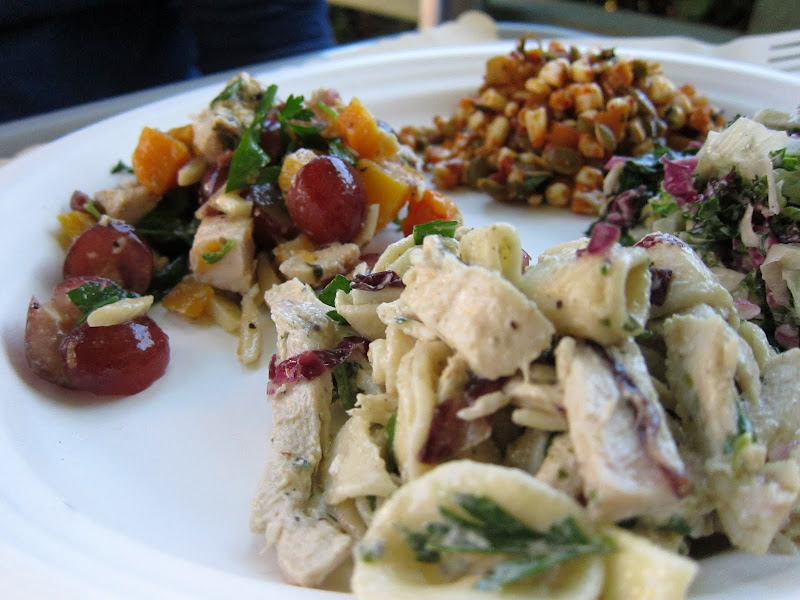 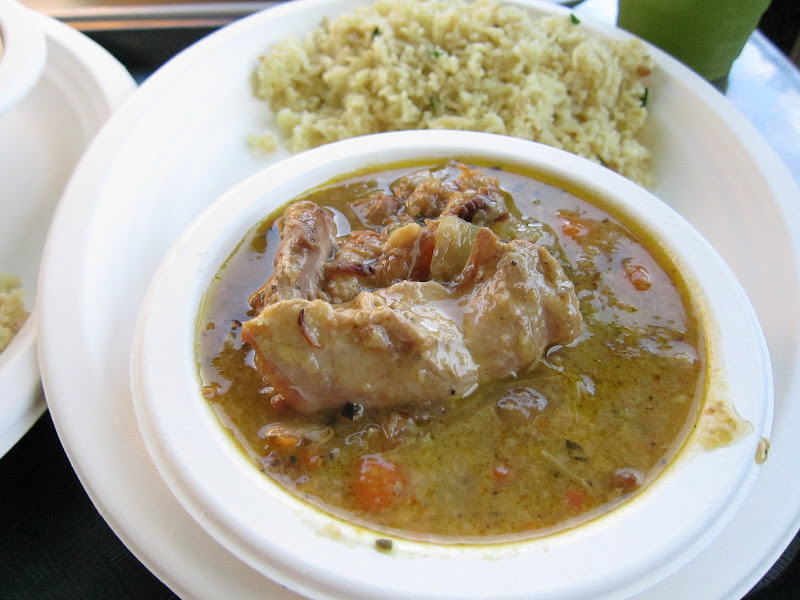 Lemongrass chicken, ginger, oranges – Slightly Asian flavors with the lemongrass and ginger but it still went well with the rice pilaf. They give you a nice portion. 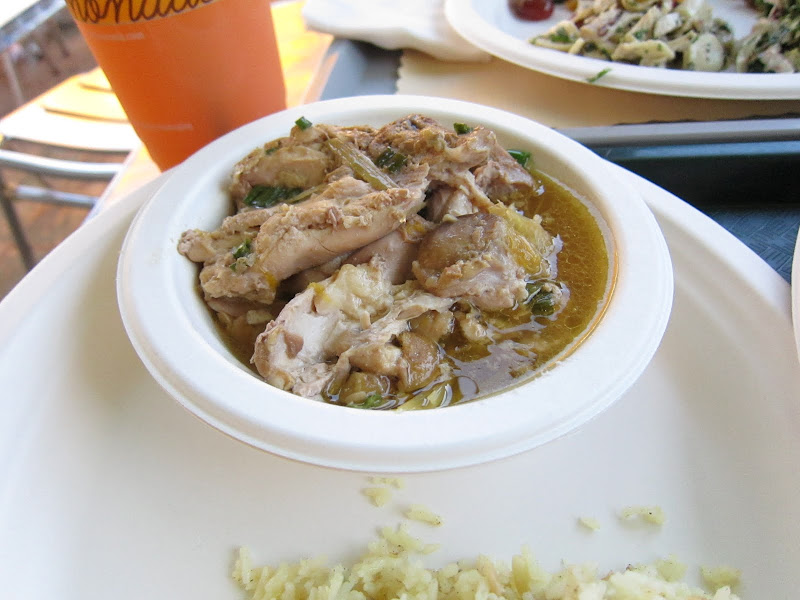 Red miso beef short ribs. Slightly on the sweet side, with subtle acidity, and a hint of miso. I think you would definitely get tired eating just this dish by itself. You would certainly need another stew or some of the salads to reset the palate which may feel overwhelmed by the concentrated flavors in this stew. 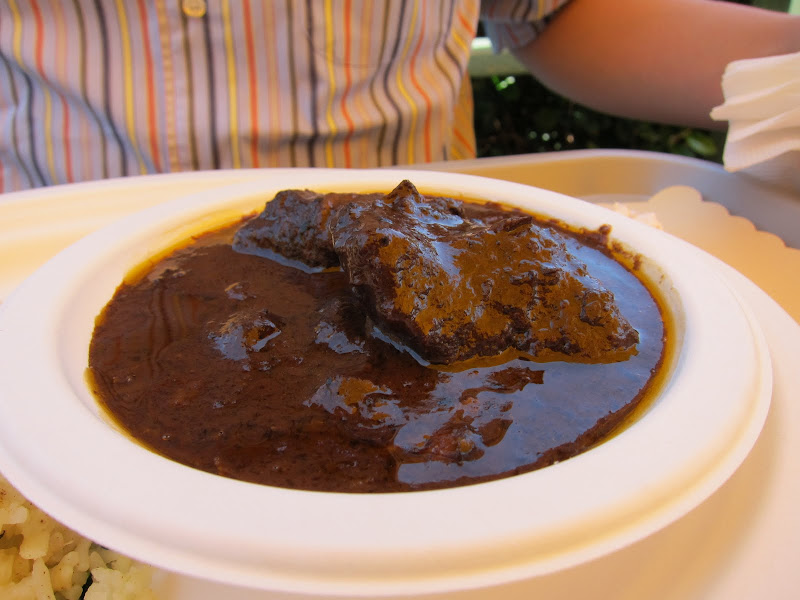 Citrus poached salmon filet – Served cold, which was a bit odd but it was well seasoned and tastey. 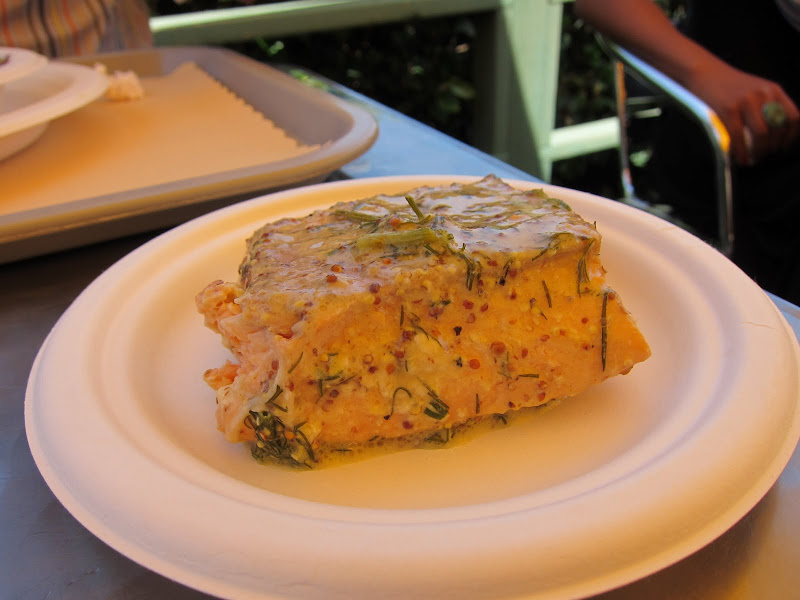 Overall, Lemonade is a delicious destination, especially for a lazy lunch. They have multiple locations around LA in addition to the Beverly Hills one, including Venice, Downtown, and the MOCA.

I definitely plan on going back to try the many other salad and stew options. Maybe one downside is the place can be sorta pricey, but I don’t mind paying a bit extra for good food in a nice atmosphere.