So I’ve been wanting to try this place for sometime, but Dumpling Man is not a fan of the frenchy stuff. So I was just waiting for the right friend to come along to suggest a nice brunch place to try. Unfortunately we didn’t make it to the place until after noon at which time they stop serving breakfast. Not too big of a loss since I probably would have ordered some lunch fair anyways. The place is next to The Little Door which offers a fancier more formal French dining experience. As you can see from the picture, The Little Next Door is more like a French deli and cafe. 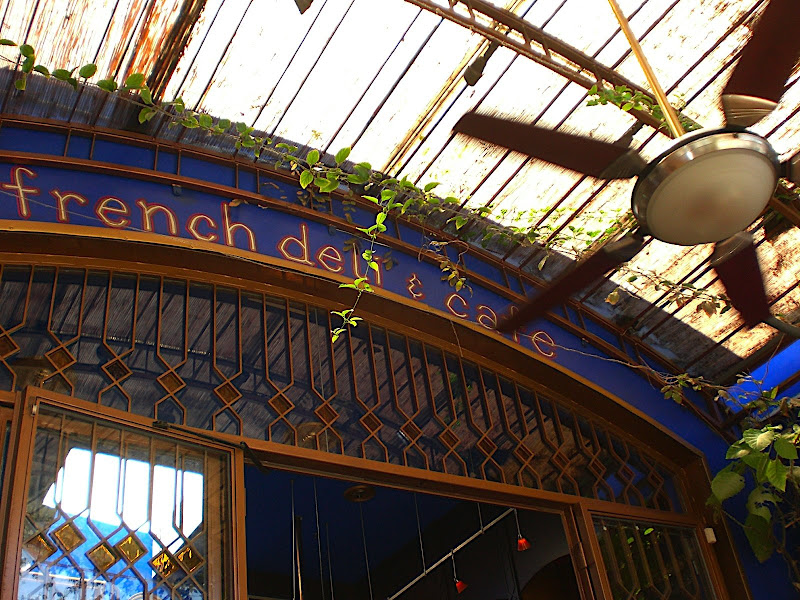 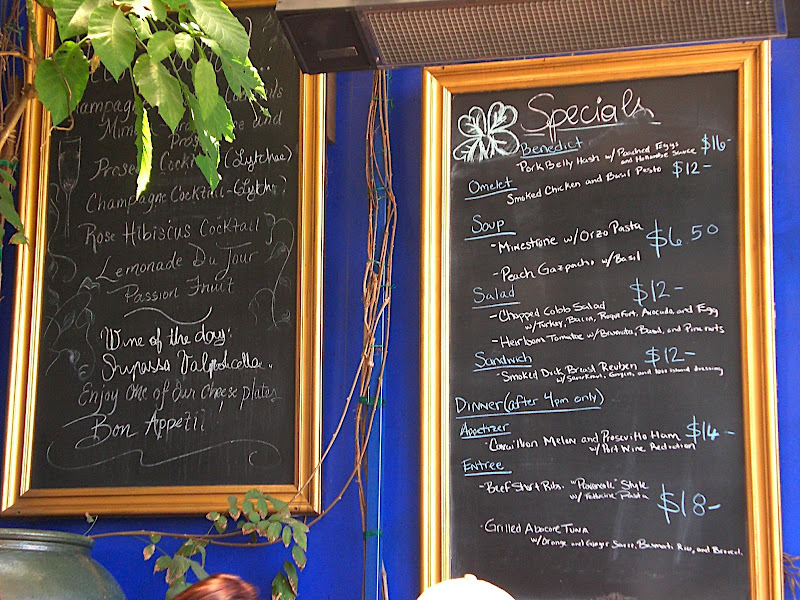 I started off with their Lemonade Du Jour which to my surprise was a deep crimson as opposed to pale yellow. If I heard the Frenchy waitress correctly, it has currants in it which gives it the color. It also gives it a different flavor, like cranberry juice + lemonade. Not particularly special for the whopping $5 price tag. 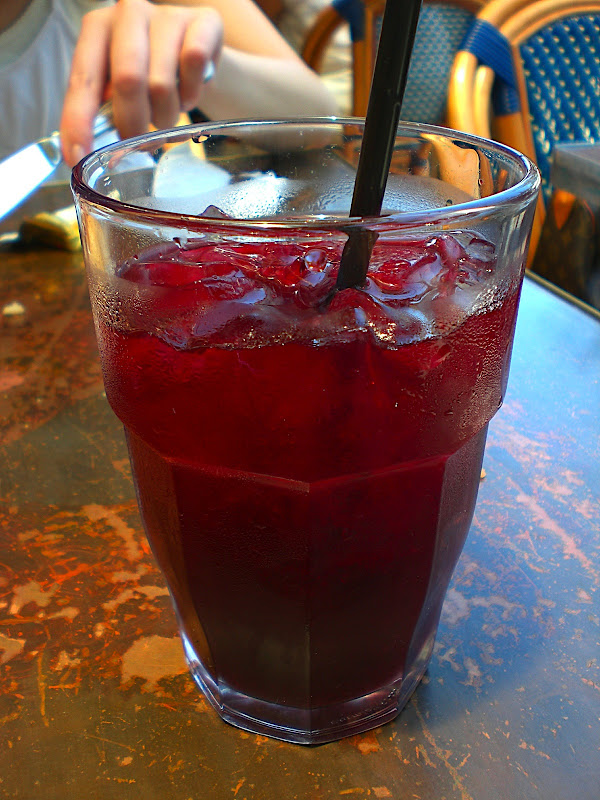 Of course, being a French eatery they serve the traditional french baguette with butter. I’ve definitely had better French bread. This one certainly had the crisp crustiness, but it coulda been softer and more fulfilling on the inside. Just seemed a bit on the dry airy side. We ordered the “Little Next Door Terrine Selection” which was comprised of duck terrine + rabbit rillete appetizer. Although I couldn’t quite describe what all of those words meant, I could only my friend that I thought it was something spreadable, I was thinking something along the lines of pate. I do LOVE pate. I don’t think most people eat or have eaten it, but growing up it definitely was something my family ate. I mean its in Vietnamese sandwiches so maybe more people have eaten it, they just don’t know or care to acknowledge they’ve eaten a spreadable version of an animals unmentionables, haha. I could only guess which was the rillette and which was the terrine, but I liked the triangle that’s not standing up. The baguette served with the dish was certainly toasted and just too dry. The green salad was unimpressive. The mustard or “moutarde” as my mom would say was a nice touch and something I would not have thought of to accompany the pate. In general, I’ve had better pate even from Trader Joe’s but I’m sure my palette just isn’t refined enough. I wouldn’t order it again. 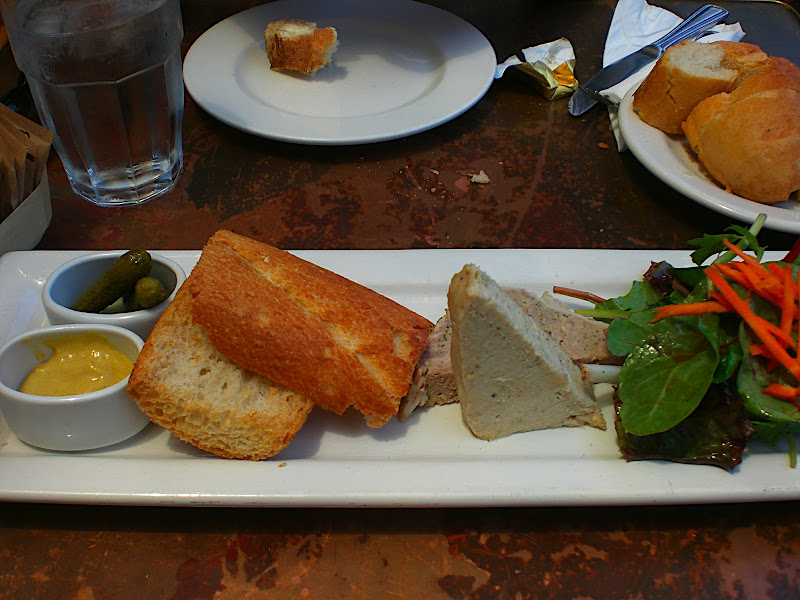 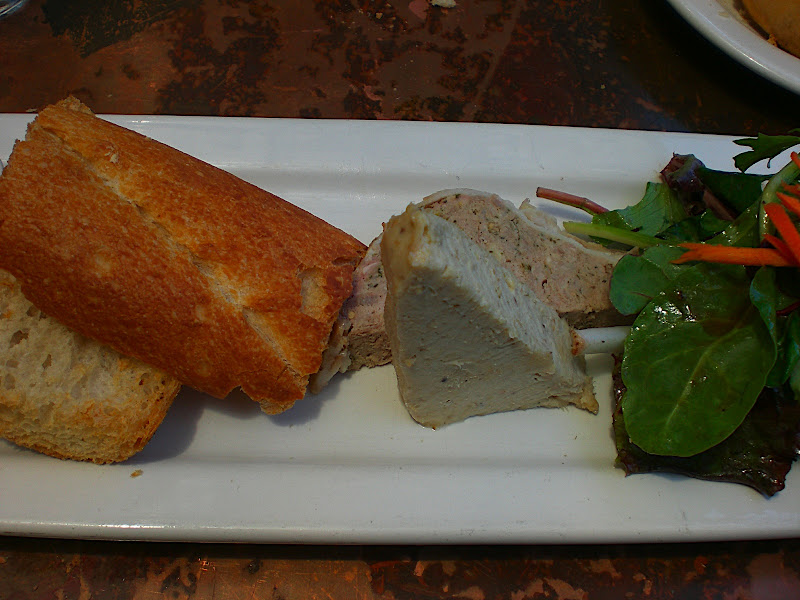 My friend ordered the Ahi Tuna Tartare which I thought was going to be strange being tuna, hummus in pita bread. It was actually refreshing but I still found the texture of the hummus to be in opposition to the smoothness of the tuna. The flavors were nice though, very mediterranean. The little cucumber salad had similar flavors so I guess went well. My friend really enjoyed it. 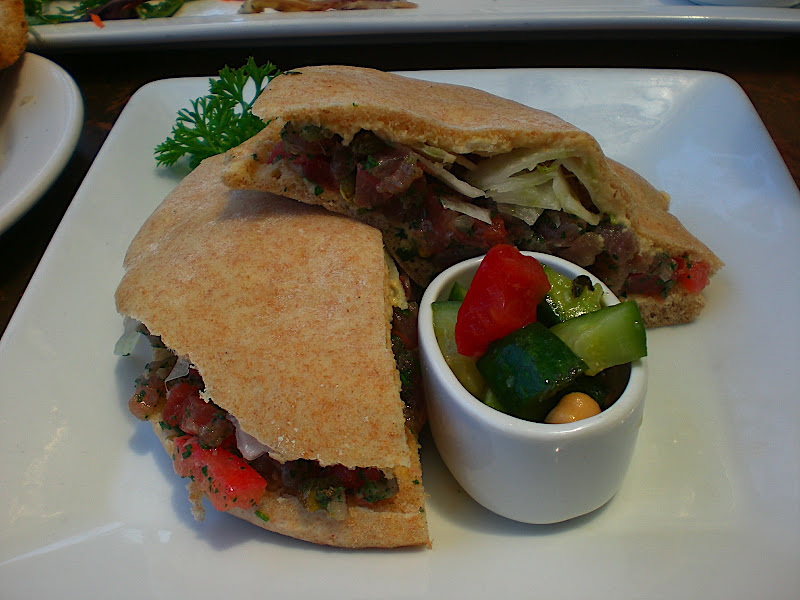 I got the Croque Monsieur which I probably would never have ordered had it not been for that episode of Barefoot Contessa where she talks about this very well-known dish. Thinking myself mildly-versed in French food, I was surprised to hear about this dish since I never tried it. It’s basically a fancy French ham and cheese grilled sandwich. I believe this one was made with Gruyere cheese which you can see melted on top and sandwiched between and the bread and ham must have been a type of bechamel sauce. Overall an extremely rich dish but very tastey for my first croque monsieur and I’m not even a cheese lover. 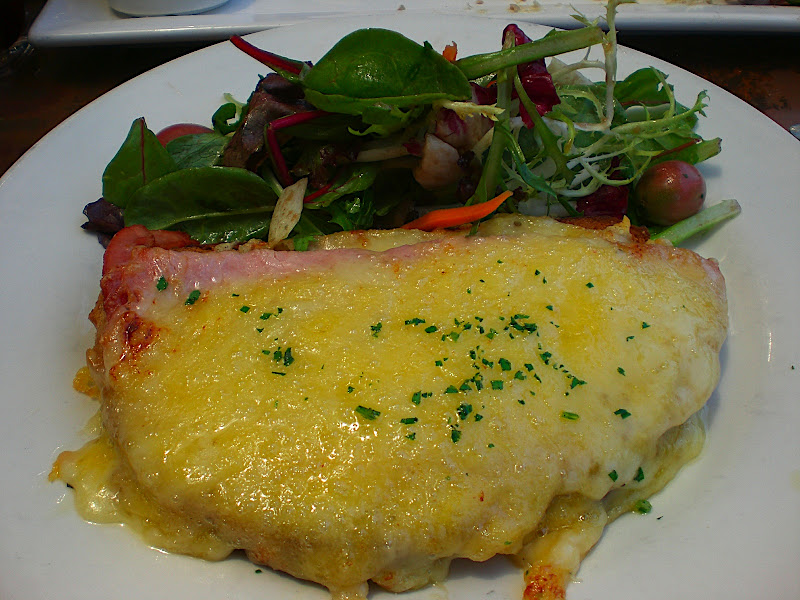 Although, I was thoroughly stuffed, I felt obligated to try dessert because its a French place and they’re experts in the dessert department. My friend got the eclair, but I’ve never been a fan of eclairs so don’t take any of my opinions to heart. She felt like the eclair was purchased from Costco. To me, it was just like any other eclair, soggy-tasting on the outside and some forgettable cream on the inside. This one had a chocolate cream. 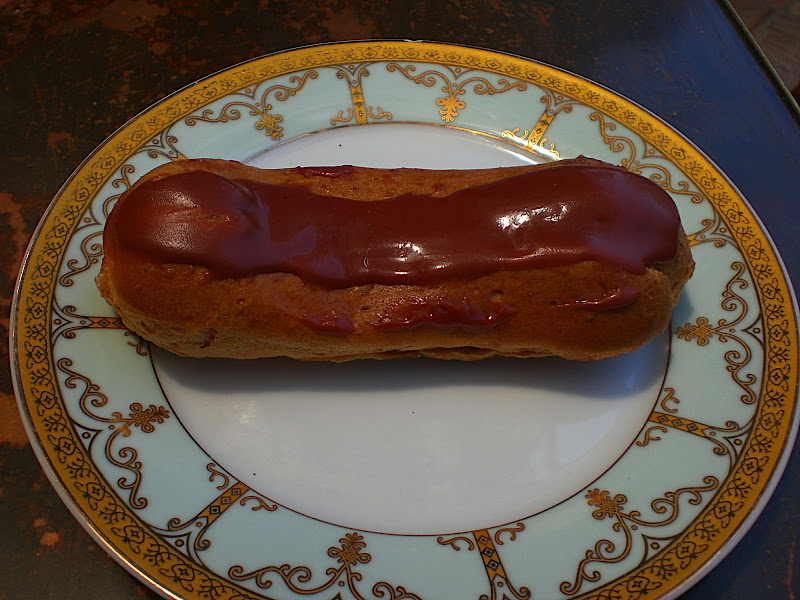 I got the Panna Cotta with rasberry coulis and I was totally underwhelmed. I’m no expert in panna cotta having only had it one other time when my friend made it for me. So based on my past experiences, I imagined its texture to be smoother and softer, something like creme brulee. But maybe I’m just wrong and panna cotta is supposed to taste like overcooked cheesecake. The rasberry coulis was no different. They must have added gelatin to get it to have such a firm jello like texture. The panna cotta had a hint of almond extract which 80% of the time I abhor. All in all, not a good dessert. 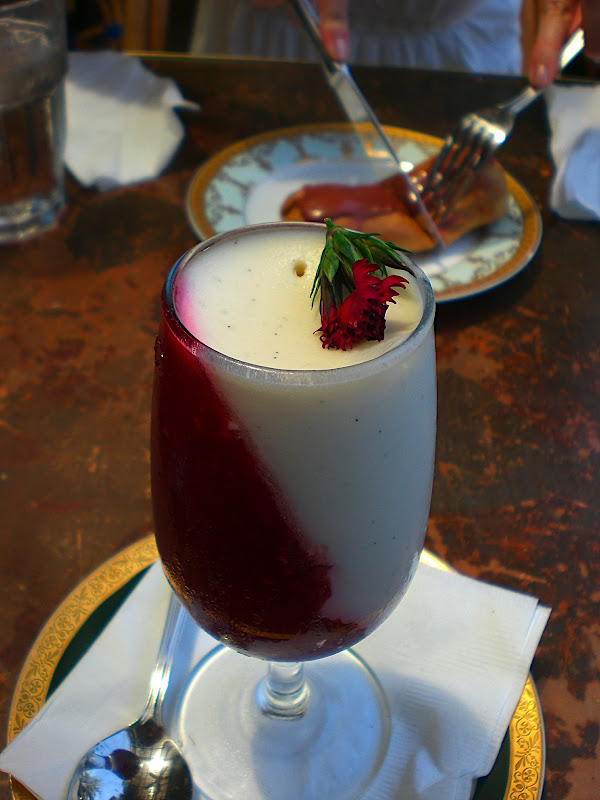 Despite the dessert disappointment, I’ll still come back to try the other things and probably the breakfast items. I was digging the French waiter and his frenchy accent, but was not digging his seemingly sprayed on orange tan emanating from his face. It was a hot and sunny weekend so maybe he forgot his sunblock, but in this town I wouldn’t doubt the “spray on tan gone wrong” scenario. As for the waitress, I found it strange that she would ask us how we were doing but never stick around to hear our answers. She was also frenchy. Props to the place for keeping it as “authentic” as possible.

Find it on Yelp