I apologize for the lack of updates. I have been “overworked” and I’ve been forgetting my camera like crazy. It’s very hard to document everything that you eat. Props to all the real food bloggers out there. Now on to the good stuff!

Apparently Myung Dong Kyoja is actually a restaurant chain in Korea, very popular for the “knife cut” noodles also called “kal gook soo”…i think. Whatever, I’m not Korean so don’t quote me. Anyways, you will soon find out I love noodles and, well, you know who loves dumplings and this place has em both. What I don’t like about this place is the lack of panchan. You go there and you get 2. Their infamous kimchi and some other pickled cabbage/raddish thing. I really love going to a Korean restaurant and getting like 5 or 6 diff things, oh heaven!

So let’s start off with their kimchi, rumoured to be a first date’s worst nightmare. It is true that this kimchi has two main ingredients, cabbage and GARLIC. Lot’s and lot’s of garlic. If you even eat just 2 pieces, you’ll be burping up garlic fumes for the rest of the night. Despite the stinkiness, I still eat it, not as much as I would at any other korean restaurant but I still power through like the champion I am. 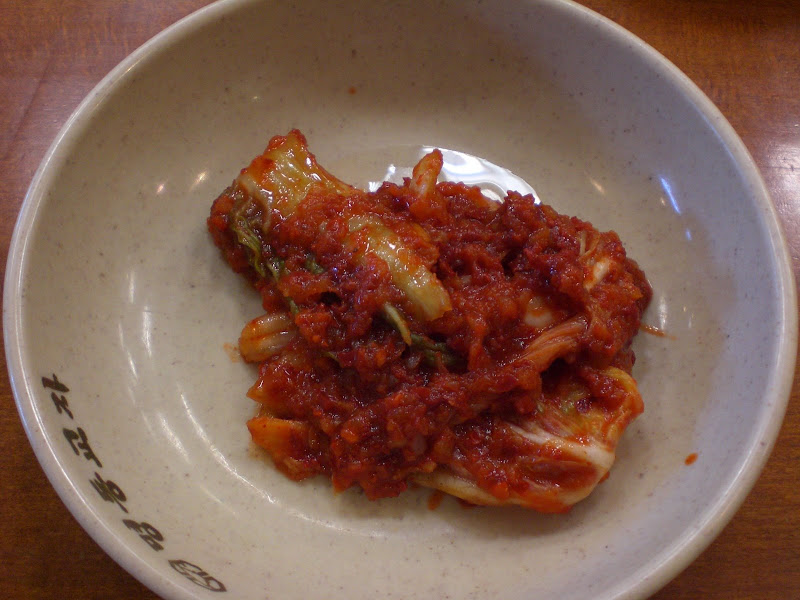 I guess that kimchi balances well with the next which is crisp, sweet/sour, and refreshing. 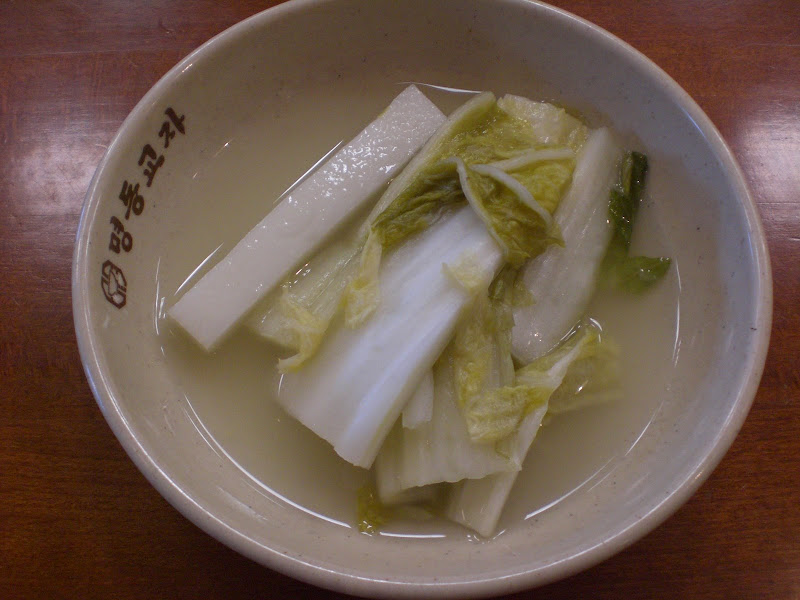 The mandoo cannot be compared to the chinese xiao long bao. Korean just make their dumplings different. This one in particular has a lot of chives as their base vegetable as opposed to cabbage or kimchi. There is a little bit of juice in the dumpling but I don’t think its meant to be a “soup” dumpling. The juice seems mostly like fatty juices as opposed to soup. Some mandoo I’ve had have big garlic taste but these are pretty clean tasting. My one knock is that it comes in a plastic steamer! Really takes away from the “authentic” feel, but whatever. 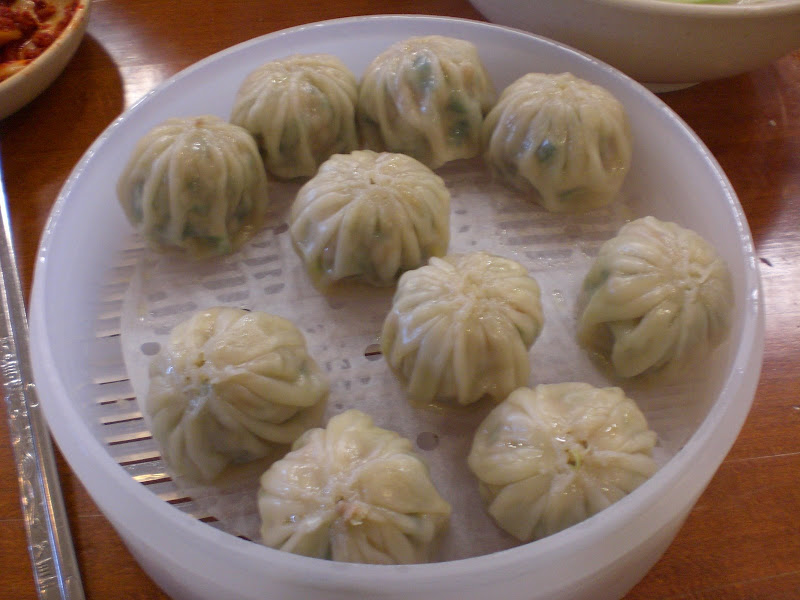 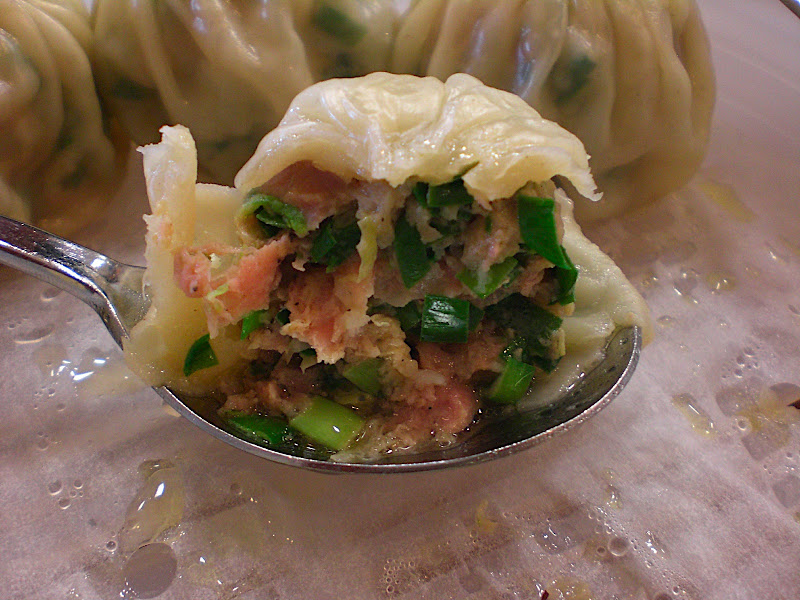 Ugh, so the next dish was a hot mess. Ironically, it was a cold noodle dish which I had fair warning about after reading the reviews on yelp. After reading the description as an “acquired taste” or as a “soybean milkshake” with noodles, I wasn’t really looking forward to trying. In fact, I didn’t want to order it at all, but after 5 trips to this place, the Dumpling man insisted we order it out of undying curiosity. I expected soymilk with noodles, but it really was more like a gritty thick soy shake with noodles. I had 2-3 bites and after that I couldn’t pretend to like it anymore. 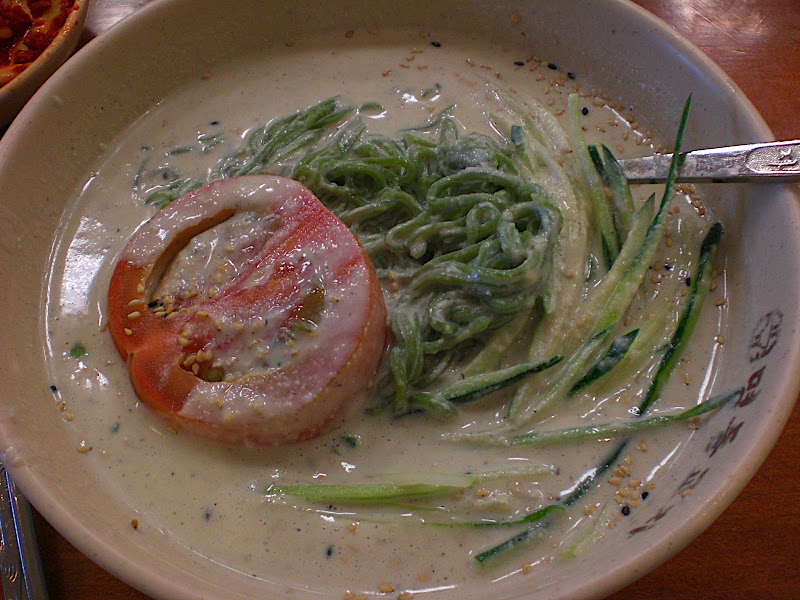 I spent most of my time eating the “knife-cut” noodles. The noodles are pretty soft and chewy, and ppl say the soup is made with MSG, but my MSG-ometer says the MSG content is very low to non-existent. I’m not screaming for water 30-45 min after dinner. I also enjoy the veggies and ground pork that seems pre-sauteed and then added to the dish. I can never finish one bowl, so it’s pretty big. It also comes with dumplings that have the same filling as the steamed dumplings. 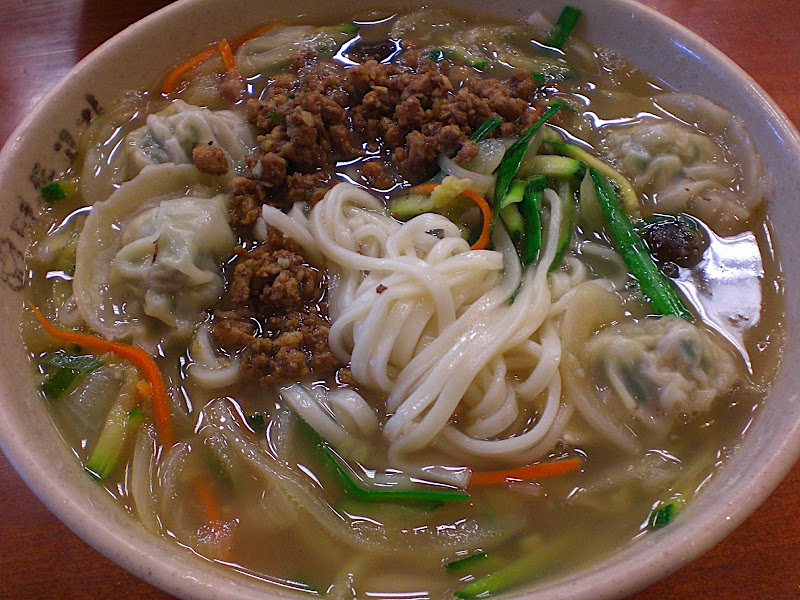 The place in general only has like 8 things on the menu, which has been revamped to include pictures of all the dishes. The place is pretty affordable and street parking hasn’t been a problem.