Aren’t churros a Mexican thing?  That was what we pondered as we sat down to enjoy the churros at Churreria Laietana.  Living in California, we are no strangers to this delicious foot-long deep fried dough, traditionally covered in cinnamon sugar, and sometimes served with a side of dipping chocolate.  You’ll easily find them at amusement parks and Mexican restaurants.  Most of the time they’re usually pretty mediocre, but on that rare occasion they’ll knock your socks off and make you wish churros could be classified as “healthy.”  It took 2 attempts before we could eat here.  Damn them Spaniards and their “siestas!”

Chocolate con Churros
The shape of these churros was probably one of the few things these guys had in common with the churros The Annoyer and I are used to having at home.  They are definitely more crispy and less soft on the inside.  They are topped with powdered sugar as opposed to cinnamon and granulated sugar, which The Annoyer argues makes them less sweet. 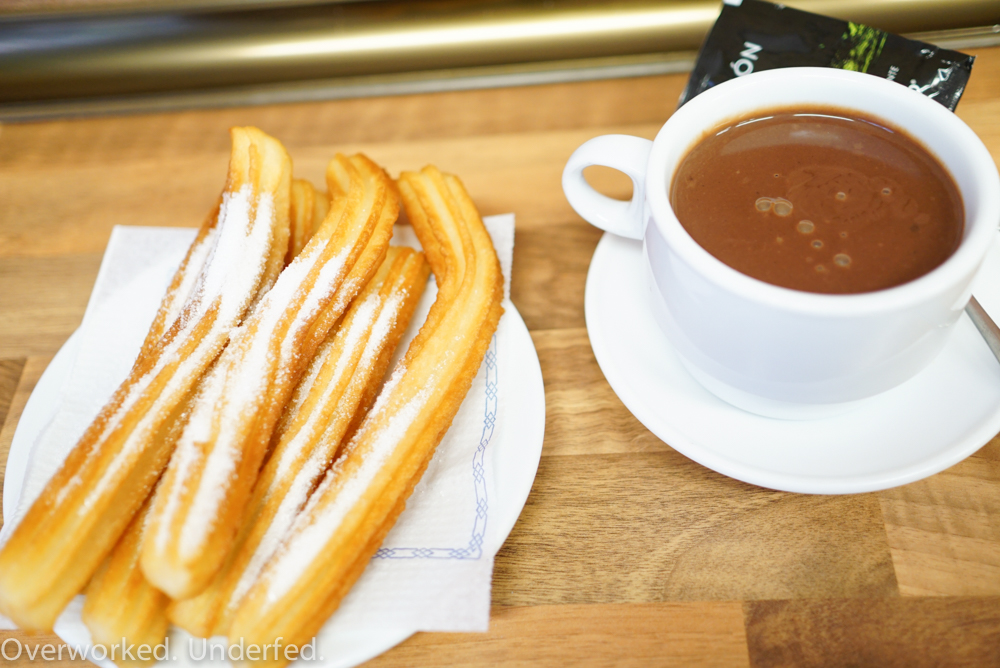 I equally enjoyed them with and without chocolate.

Porras
I had no intention of coming here for anything other than churros, but I was really curious to try their other offering, “porras.”  For less than 2 euros, I enjoyed these softer more chewy cousins.  They reminded me of the long Chinese fried donuts “you tiao.”  The churros felt extra special crunchier than what we are accustomed to, so I liked the texture here a bit more.

To answer our initial thought, churros likely originated in Spain or Portugal (though some may argue China given the similarities to “you tiao”), and were brought to Latin America by the Conquistadors.  The cinnamon sugar versions we find in amusement parks are certainly an American take on it.  Maybe we’re more accustomed to the Latin and American versions, but I’ve had better churros back home.  Unfortunately, we didn’t get to try any other churros while in Spain, so I guess I’ll never know if this is just how churros are done in Spain.  I’ll give the place points for friendliness, price, and freshness.