The Annoyer has been talking about Kabuto for a long time.  It may be one of the best high end sushi places in Las Vegas.  Wherever there is delicious sushi, The Annoyer is sure to be there.  Finally we had a chance to check it out for my birthday weekend in Las Vegas.  I only wanted to eat at the sushi bar because there is no other way to enjoy sushi in my opinion.  Kabuto serves Edomae style sushi, which means no fancy sauces or rolls, only traditional sushi, the way it was eaten hundreds of years ago.  We opted for their middle (Yoyori*, $80) and top (Kabuto**, $120) tier omakase options.  Both included appetizers, grilled items, sushi, and dessert.

Fresh selection of the day

Front row seats.  Since recently returning from Japan, it was a bit jarring to be eating sushi where the chefs and waitresses speak decent English.  I kept saying to myself “Wow, their English is great!”  To which The Annoyer would respond, “Uh yeah, this IS America.” 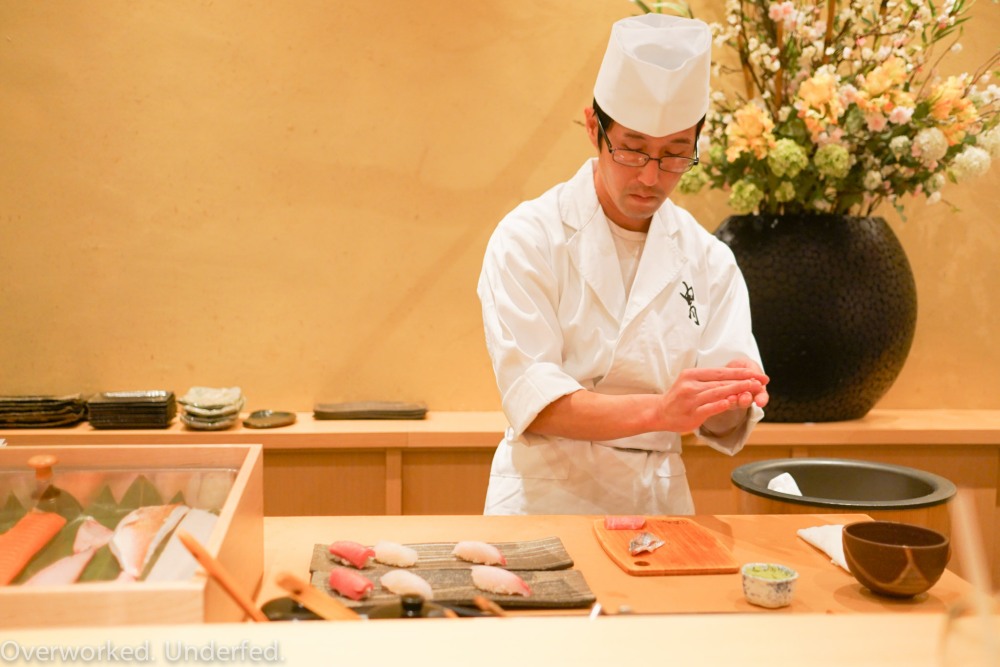 Aperitif american cherry sake, aged 10 months, 2% alcohol
Can’t say I tasted much alcohol here, but a sweet way to get the meal started.

Ankimo mozuku, sweet vinegar sauce**
Orange Clam scallop, firefly squid, uni sesame sauce
The ankimo was clean and not as livery as I’ve had before.  The sweet vinegar helped cut through any off notes, but it was pretty clean.  The slippery seaweed strands were a nice textural complement.  The clam had a touch of springy chew.  The firefly squid didn’t squirt too much of that innard stuff.  The uni sesame sauce was sweet.  I didn’t taste much uni.

Bluefin Tuna (Spain)
I think Japan ruined sushi for me, especially tuna.  The bluefin was fine, but not nearly as fresh and clean tasting as it was in Japan. 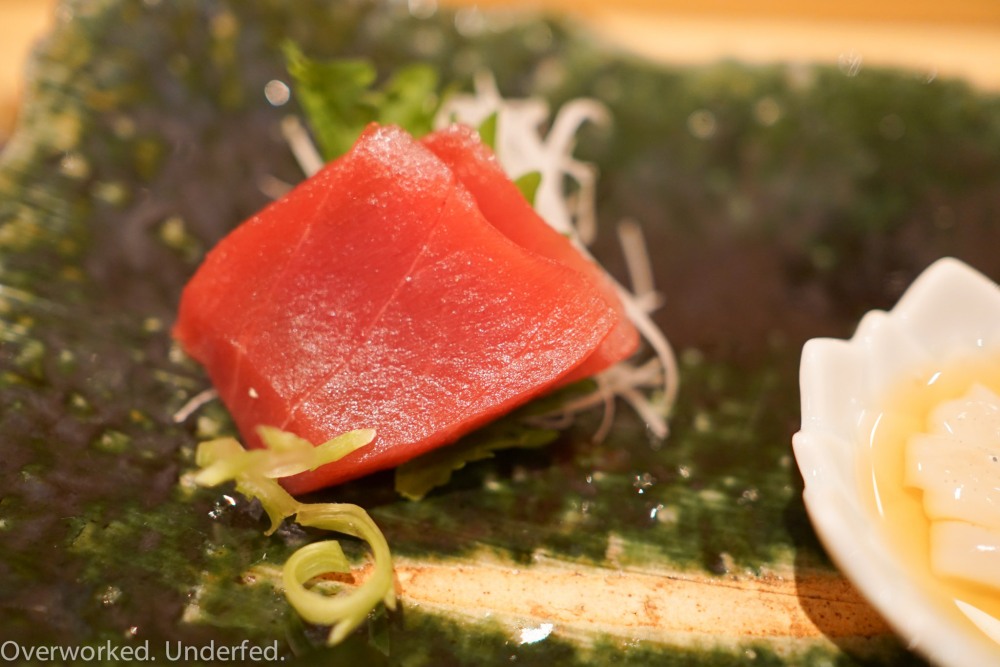 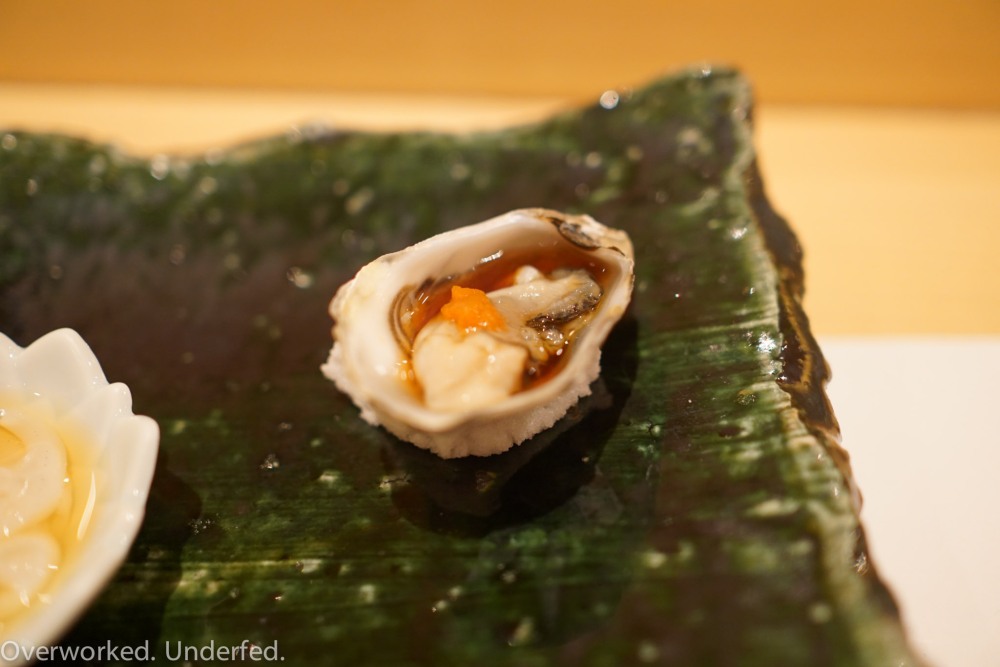 Conger baby eel**
These looked like the icefish we had in Japan, but on closer evaluation they were in fact more flat like an eel.  No bones here, just slippery in the mouth with a bit of sweet vinegar sauce. 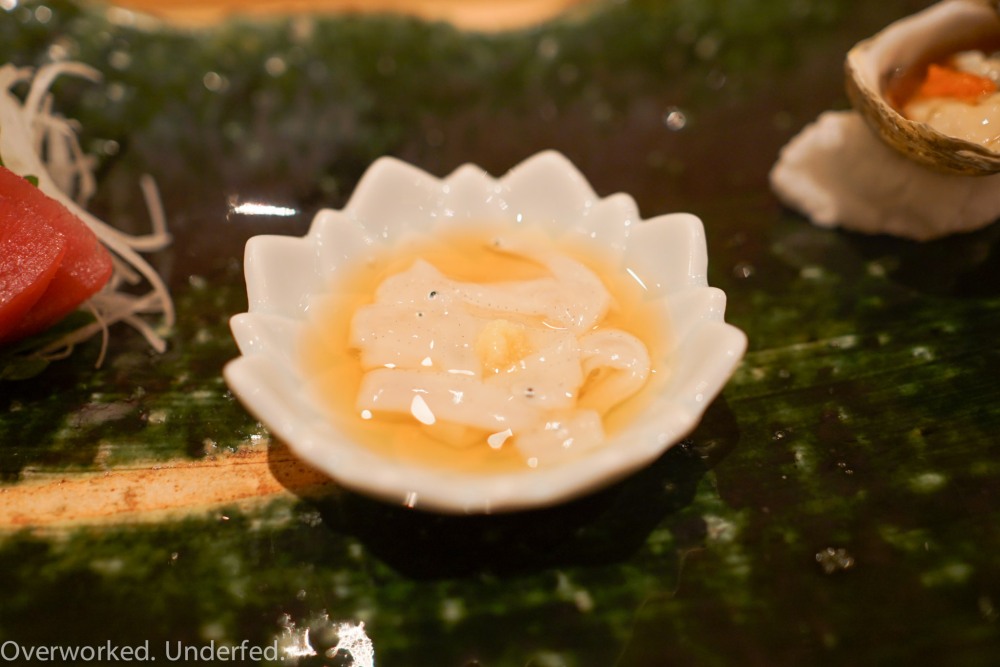 Hotate scallop (Boston)**
Clean and sweet, but not as good as Ohshima. 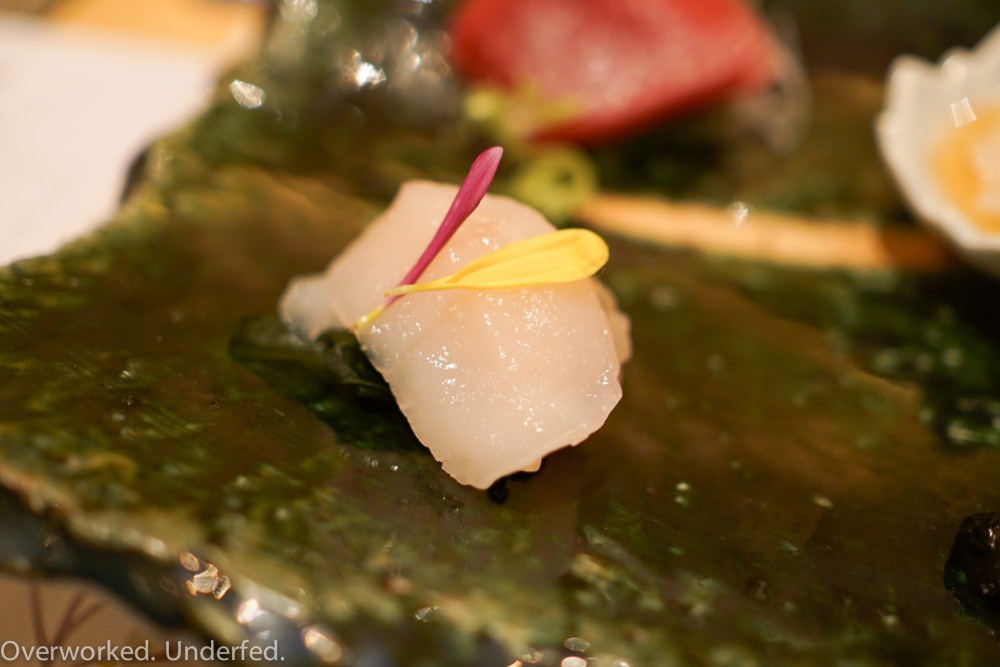 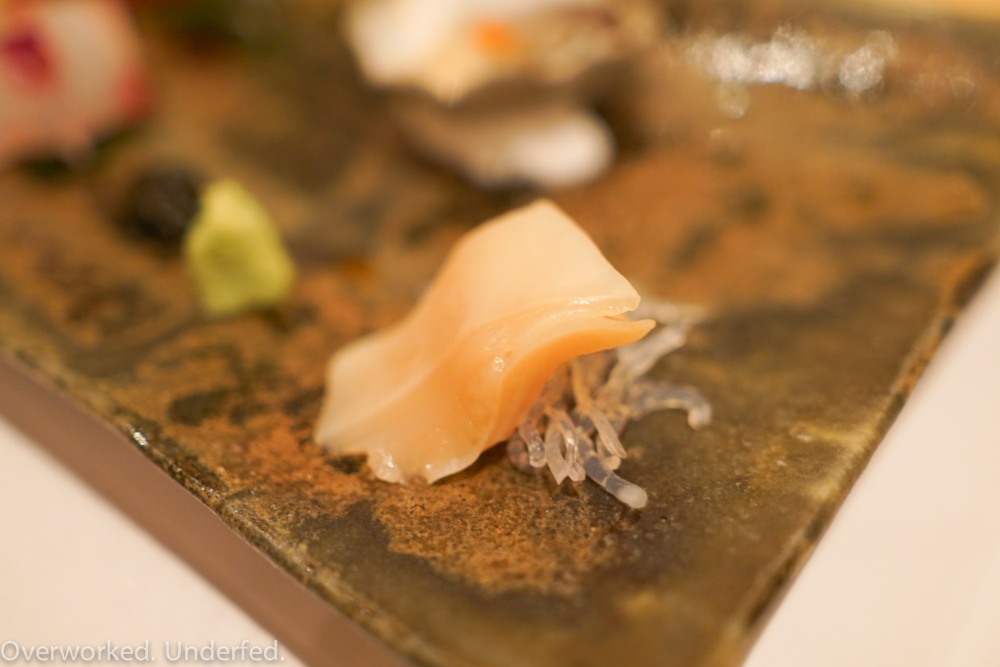 Isaki striped pigfish collar**
Great meaty collar, so moist.  I missed that fantastic charcoal smokiness that all the grilled things had in Japan. 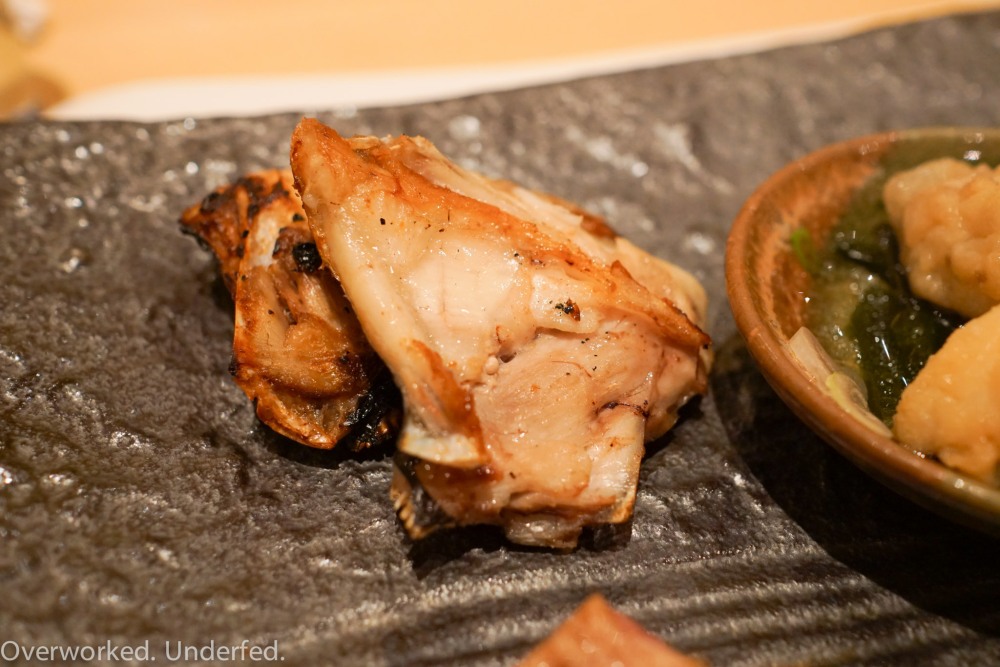 Red Snapper deep fried, marinated with vinegar**
I found this one a bit odd because it was fried, but then marinated and not even warm.  I’m not sure why it was fried if it wasn’t going to be served crispy and hot.  Flavors were nice, slightly sweet and sour.

Suzuki japanese sea bass, yuzu
Well cooked, but could have used a little more salt to bring out the yuzu flavor. 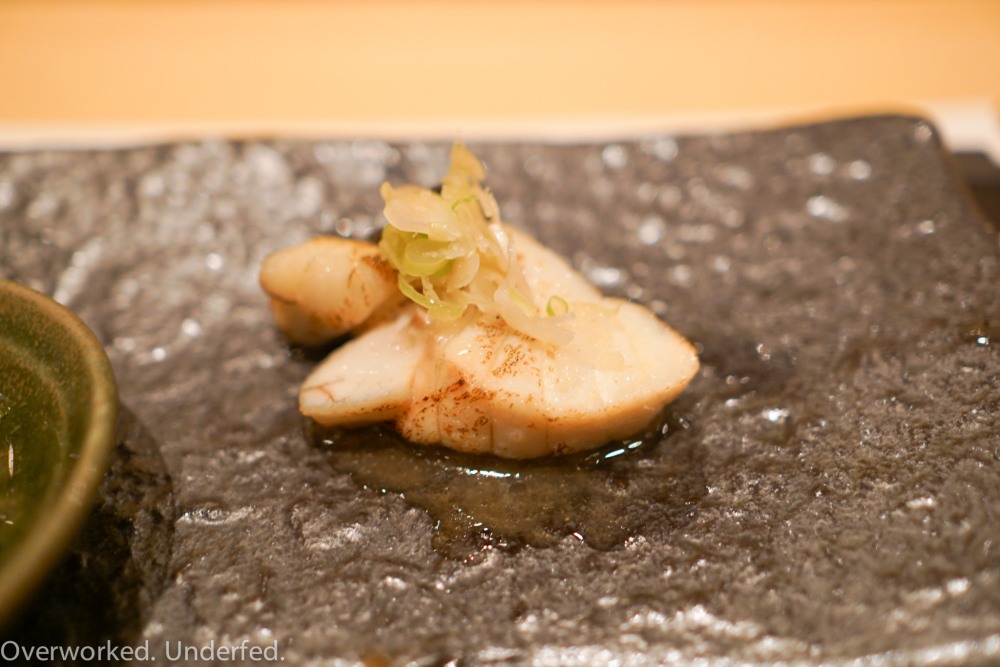 Ocean Trout creamy sesame sauce, okra
This was the 2nd best item of the grilled selection.  Very juicy and moist and the sauce was perfectly balanced and complemented the fish. 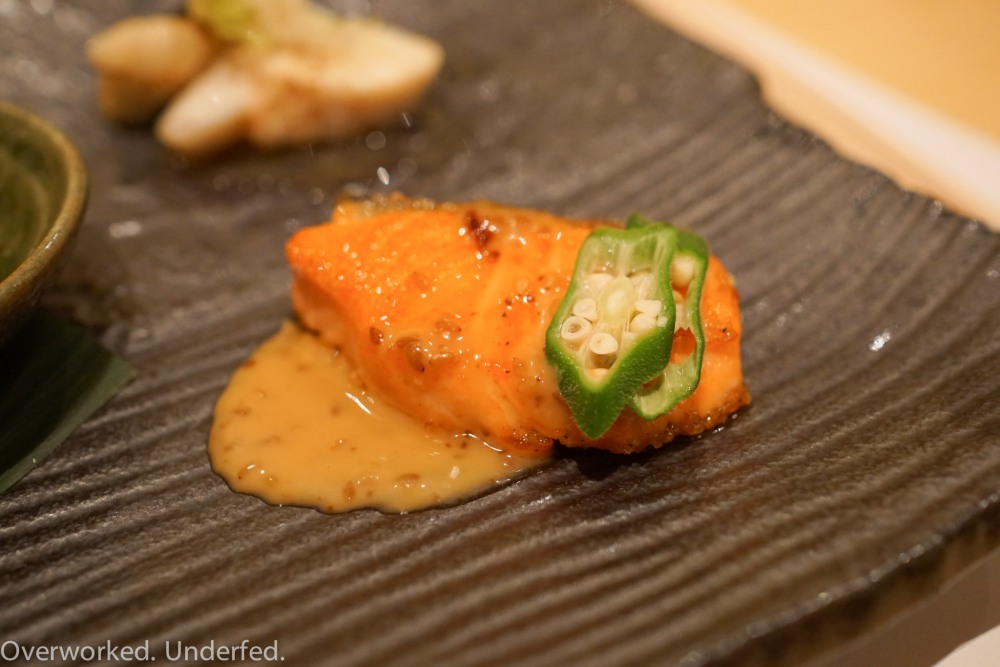 Grilled Fatty Tuna ponzu, radish**
I loved this one the most.  The fattiness here was more apparent than in the other fishes and that ponzu radish was savory, sweet, and sour.  YUMS! 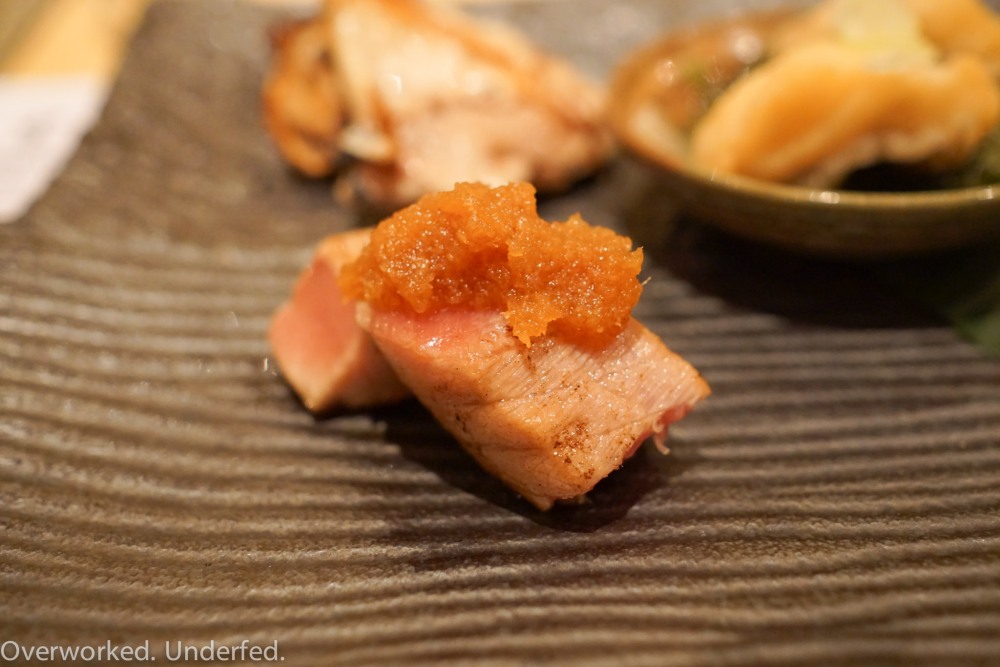 Braised Bluefin Tuna sweet soy sauce*
I’ve never seen tuna like this but it was packed with flavor.

Kasugo-Tai spring baby snapper**
A nice piece of fish, but what was most striking was the rice.  It may have been the best rice I’ve had in a while.  It was deliciously well balanced between salty, sweet, and sour.  It was warm and the perfect texture. 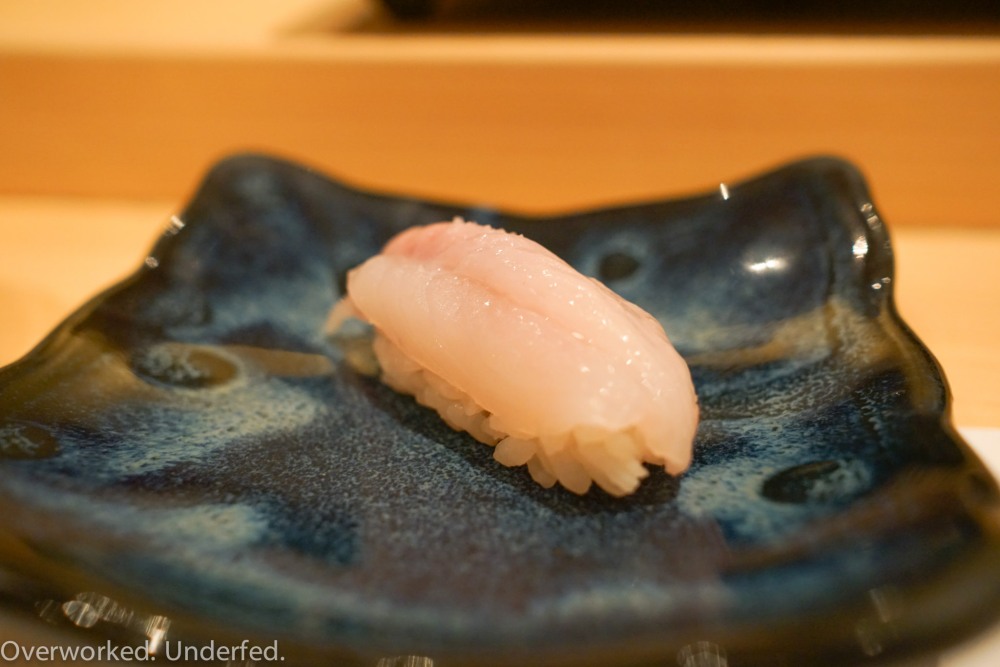 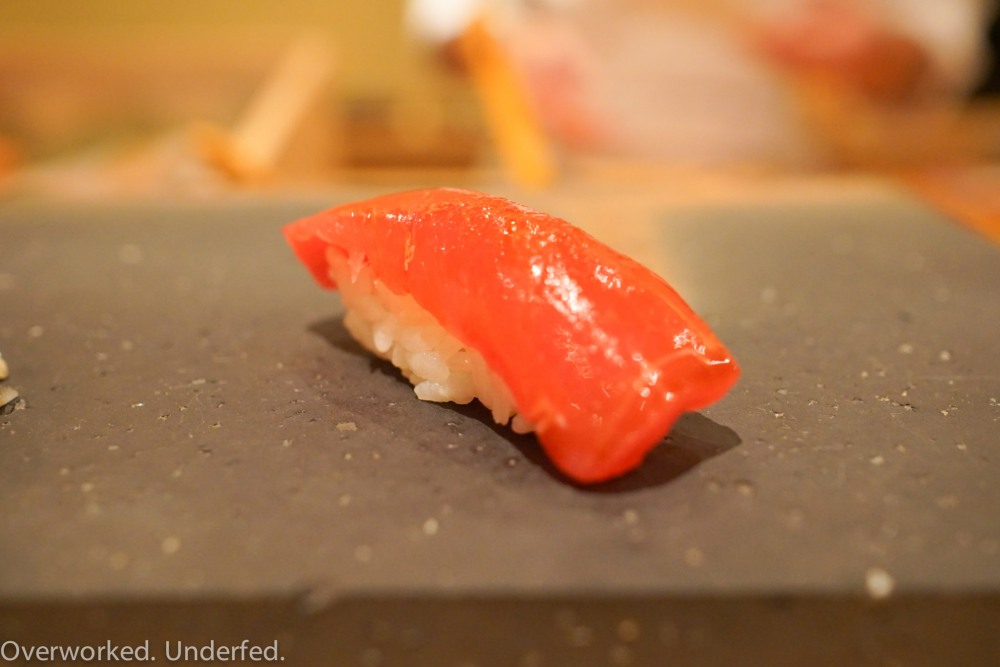 Hotate scallop (Boston)*
The Annoyer was quite pleased.

Wakaremi triangle dorsal fin of bluefin tuna**
The Annoyer and I have never had this cut of tuna.  It was pretty fatty, but the toro here was generally more fishy than I would have liked. 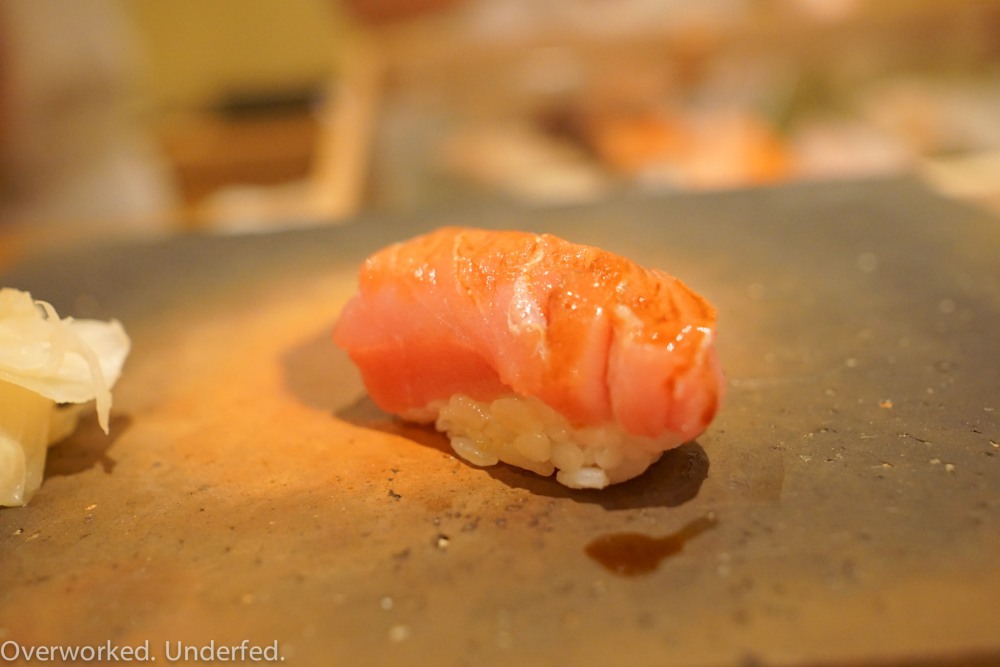 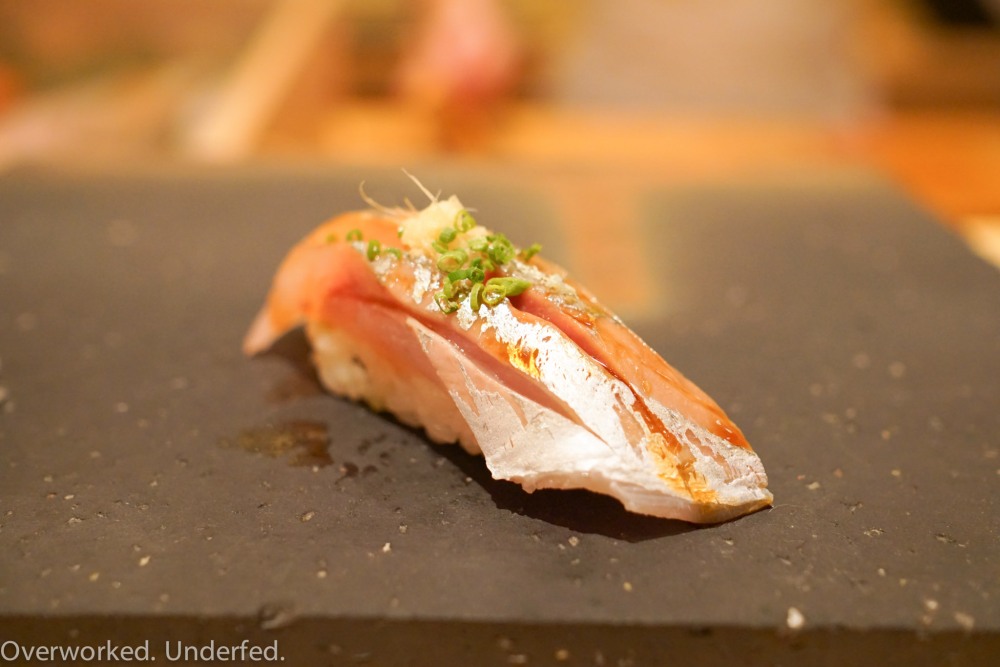 Otoro**
No doubt, the fattiest cut of the night.  Really melted in your mouth, but again, not as clean as I would have liked.

Ikura marinated in dashi, sake, salt
The sake flavor was very prominent here, but I quite liked it.  YUMS!

Ezo-Bafun Uni
It’s interesting how Hokkaido uni are so much smaller than their Santa Barbara counterparts.  Very delicious irrespective of size.

Kogane Anago golden sea eel**
I had a lot of anago while in Japan.  I’ve certainly noticed anago is more about the meaty flesh, while unagi has that fatty skin that crisps up.  I think I miss that unctuousness of unagi.  Nothing bad about the anago here though. 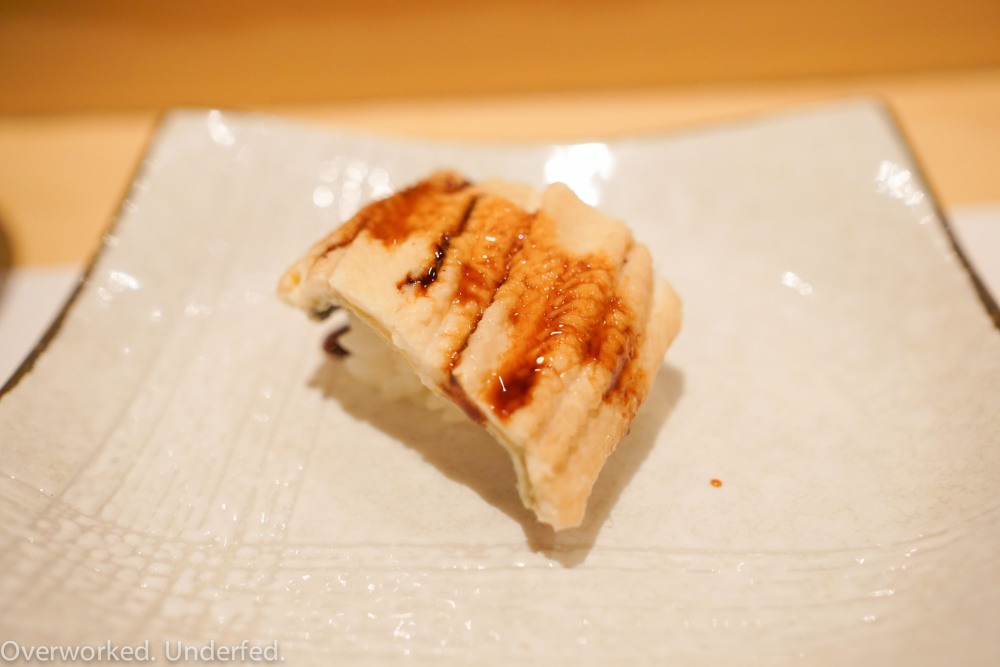 Hotate lemon, salt**
The Kabuto omakase course allowed for 2 pieces of any sushi of your choosing.  I’ve never had such an option before.  The Annoyer would have ordered the most expensive pieces like otoro or uni to get the most bang for your buck.  Since I wasn’t too impressed by the toro and already tried the uni, I went for the scallop.  Lovely and a generous portion, but it’s no Ohshima.

Harasu trout belly**
This was my favorite piece of the night and hands down better than the toro.  It was luscious, fatty, but didn’t have that fishiness that the toro had.  YUMS!

Hand Roll otoro and kamashita toro
The best part of hand rolls always seem to be that crispy, perfectly toasted nori.  This one was no different.  Delicious. 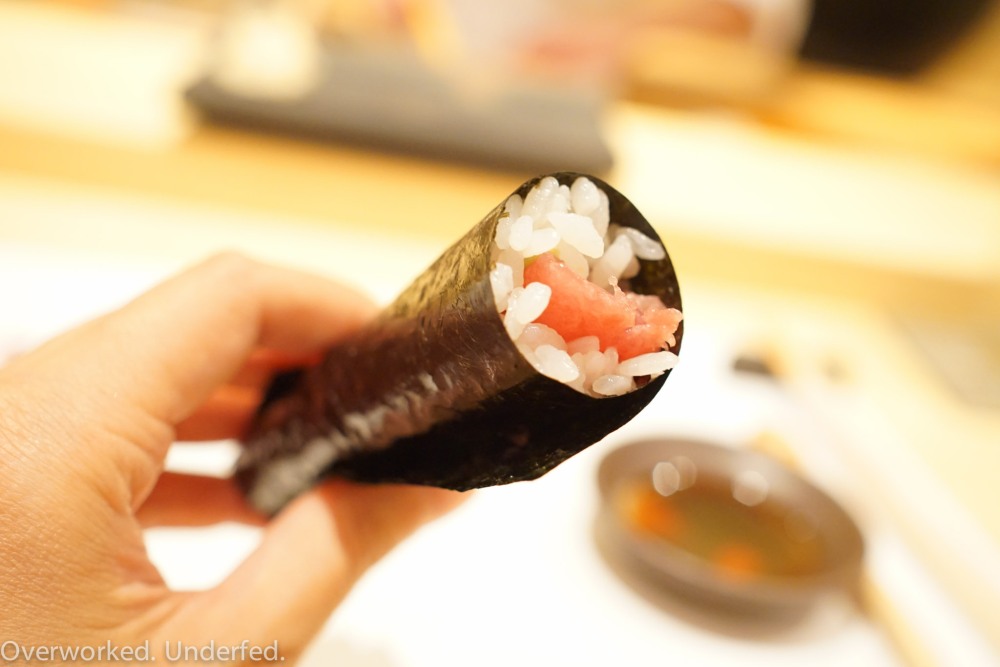 Shrimp Head Miso Soup**
There was a good amount of meat in that head and it soaked up all that miso goodness.

Fish Miso Soup*
A bit fishy for my liking, but The Annoyer slopped up every bit.

Matcha Roll Cake azuki cream**
The dessert was so Japanese in that it was not overly sweet.  The flavors were light.  I had to try very hard not to eat all of it since we were going for dessert afterwards.  I don’t usually like matcha and even less azuki flavored things but I enjoyed this.

Raspberry Sorbet*
The Annoyer was turned off by the sourness here, but I quite enjoyed it.

The Annoyer agreed that Kabuto isn’t the best sushi of our lives, but probably the best sushi in Las Vegas.  That means more coming from him since my sushi experience in Sin City is not very extensive.  Kabuto stands out since it offers a pretty unique selection of fish that would not be normally found in your average sushi restaurant.  So for that, I give it props.  I have to ding it for the toro, which I found just a tad too fishy for me.  Everything else was as fresh as could be expected, but of course pales in comparison to anything I had in Japan.  The rice was the consistent stand out and great sushi really does begin with great rice.  The grilled items were pretty solid, but I wish it had that wonderful char like in Japan.  I also thought it was great that you could choose any 2 pieces as part of the Kabuto course.