Skip to content
I love Thai food.  It’s a cuisine that packs so much flavor and punch in every bite.  Salty, sweet, sour, spicy, and your mouth just explodes.  Night + Market makes a point of  making all of that the focus of its food.  It’s more tame sister restaurant, Talesai, serves your run of the mill Thai dishes that rings familiar with most dinners.  But at Night + Market, they are slinging dishes that will either get your mouth watering from the bold unfamiliarity or stomach churning from the gastric insult of all the intense flavors.  They are serving Northern Thai food here, and if you don’t know what Northern Thai food is, well get familiar with it because the invasion is coming.  Portland’s award winning and wildly popular Pok Pok is coming to LA’s Chinatown.  So before I brought Ho Bag to Pok Pok, whenever it decides to open, I wanted to try Night + Market to see how it compared.  Joining us was Ho Bag’s friend, Queen Sticky Swatches

Fried Pig Tails
Holy crapola, this was sooo derricious!  Crispy on the outside, and drippingly gooey (totally does not sound like an appetizing texture, but it was) from either fat or tendons or both on the inside.  I kinda didn’t want to know for obvious reasons.  But real flavor came from the the fishy, salty, sweet, sour, spicy and garlicky vinaigrette that lightly dressed the exterior.  This definitely competes with Pok Pok’s famous wings, but ultimately the wings might take the cake.  I wanted to eat this very small dish all to myself.  I didn’t even offer the last tail to my fellow diners before scooping it up.  This is a MUST TRY.

Larb Gai minced chicken, lime, fish sauce, rice powder, chili, cilantro, onion
This was your standard larb gai, but amped up with the heat factor.  Hobag could not handle the heat throughout our whole meal.  She kept saying, “God, I’m such a little bitch! This stuff is soooo f*ing spicy” in between gulps of wine and water.  Queen Sticky Swatches and I were like “Hey guuurl, more for us!”  I’m sorta making up the exact conversation, but that was the gist of it.

I wasn’t suffering as badly as Hobag, but my mouth was pretty numb by the time this one rolled around.  I guess we must have ordered just the beef panang because there was not a tendon to be found here.  The meat was sorta dry.  I think they coulda served something better here, but the curry itself was deep and rich.  Hobag was dying over the roti.  She even ordered another helping despite her usual anti-carbo nature, so that’s saying a lot.  I didn’t think the roti was that fantabulous. 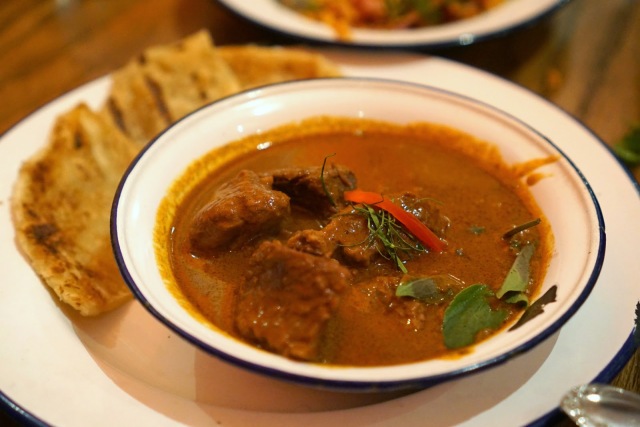 You know when you see a picture of something/someone and you say to yourself “He/She/It/That is the one!”  That’s how I felt when I saw pictures of this bad boy on Yelp.  I HAD to have it.  Love at first sight.  Tender fatty meat falling off the bone, stewed in a deep sweet soy sauce.  I guess every Asian culture does their own form of pork stewed in some type of flavored soy sauce.  I love how the Thai’s version is served with pickled mustard greens and sweet sour garlicky fish sauce.  If I wasn’t trying to trim the carbs these days, I would have dumped a whole bowl of rice on this and eaten the whole thing by myself.  While this is fairly easy to make, you’re not gonna find many Thai restaurants that serve this. 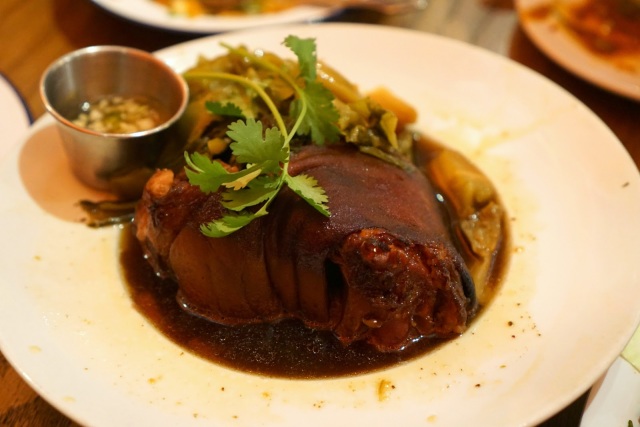 I think I could have eaten more but my mouth was on fire and I could’t fathom consuming more heat and spice.  While the reviews on this dessert were kinda meh, we went for it anyways, just to try it.  I’ve had a version of the whole Thai ice cream sandwich somewhere and I don’t think it’s something that’s ever going to go over well with the American public.  Plain old ho hum bread with a scoop of ice cream is just too strange for Americans.  This version had some sticky rice in it, which by itself, tasted good with the lightly coconutty ice cream.

Night + Market actually exceeded my expectations.  It’s menu and food pictures never really excited me enough to make that trek out to the Sunset strip, but I am glad I fought a whole lotta traffic to eat here.  They are definitely serving some unique Thai dishes here and everyone should educate themselves on Thai food that goes beyond tom yum kum and pad see ew (my personal favorites btw!).  I think this place definitely brings the authenticity that Pok Pok channels.  I would love to come back to try more dishes, but I think we definintely hit some great highlights.  Queen Sticky Swatches definitely has a point that the food is overpriced, but that location probably drives the prices.  I ding them for their small portions.  I wish they would open up a branch that’s not so crazy deep into Hollywood.  Hobag lives in West Hollywood and she sat in a lot of traffic on Sunset.  Totally ridic!  Sigh…LA traffic, you suck!
10 – You NEED to eat here
9 – Awesome!
8 – Very good
7 – Good
6 – OK
5 – Average
4 – Not bad
3 – Not good
2 – Terrible
1 – Do NOT go here