Alinea is a place that, to most food aficionados, needs no introduction.  As of the 2012 Chicago Micheline Guide, it is the ONLY restaurant to garner 3 stars.  As of today, its number 7 on San Pellegrino World’s Best Restaurant List, only trumped by places like Noma and Per Se.  It is known for its modern twist on classic flavors, with a heavy emphasis on whimsy and creativity.  One might say its chef/owner, Grant Achatz, is a bit of a “molecular gastronomist.”  Reservations can be pretty tight.  I actually called 3 months in advance!  Two or three weeks later, when I tried to increase the party size from 2 to 3 to accomodate Ho Bag, there was no budging.  Fortunately the day before our reservation, I got the phone call, and Ho Bag was set to join us.

For the whopping price tag of $210 per person, you will be served 19 courses.  While some courses are just a single bite and other courses are more whimsy than nutritive substance, I can guarantee you will be so full by the end of it all.  I was head over heels excited to get the chance to eat here.  It seems like you haven’t really made it in the foodie world until you’ve eaten a place like Alinea.

I’ve never really been able to see how roe makes anything better.  It’s just salty and fishy.  The sweet curry sauce and carrots were a nice contrast.  The meaty coconut flesh was also an interesting textural contrast.

The next series of course was presented as a “tasting of the ocean” and was presented on a piece of driftwood draped in real seaweed, the real ugly kind that floats in the ocean.

Don’t be fooled.  There’s no oyster here, just a leaf that was supposed to taste like an oyster coated in a traditional mignonette.  Ehh, I didn’t really get much of that here.  I was moving on to the next bite, I mean course, hoping for something better. 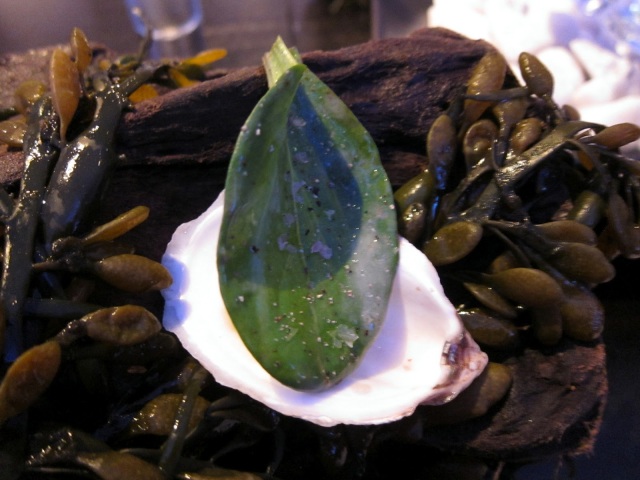 Now we’re talking.  A succulent piece of crab, with some fruity accompaniments.  It was tasty for sure.

There was a bit of a Spanish twist to this taste of the ocean.  I rather liked it, but not as much as the king crab.

I don’t know why Dumpling Man and Ho Bag weren’t a fan of this one.  It actually had some Asian flavors, if not specifically Chinese.  There were tapioca pearls dotted throughout this slippery bite. 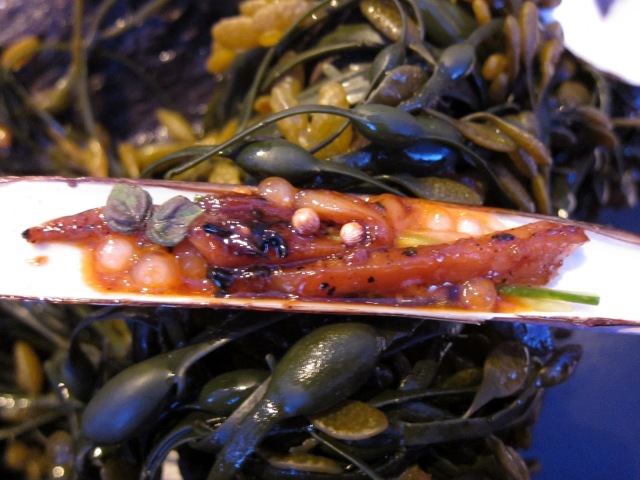 The waiters love bringing or leaving shit on your table and not explaining what purpose it serves.  Later on we found it that this is a siphon brewer filled with seaweed, bonito flakes, yuzu, ginger, soy powder, and mirin.  Does anybody know what that spells?  Yes, DASHI. 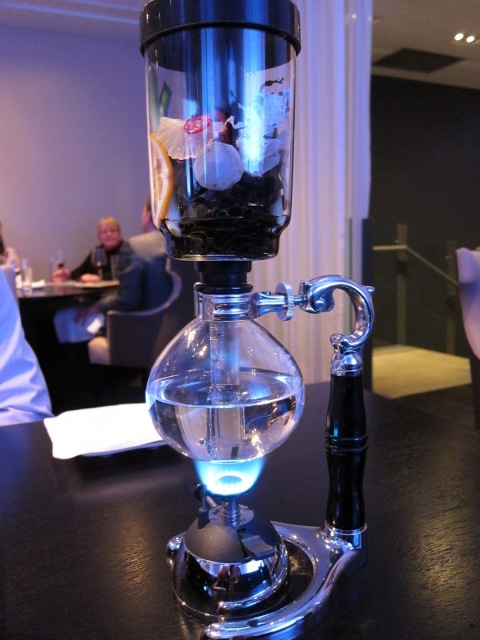 After brewing for sometime, you’re left with probably the MOST delicious dashi you will ever have in your life.  It was so incredibly savory with a gentle subtle sweet fishiness from the bonito.  It was everything umami and more. 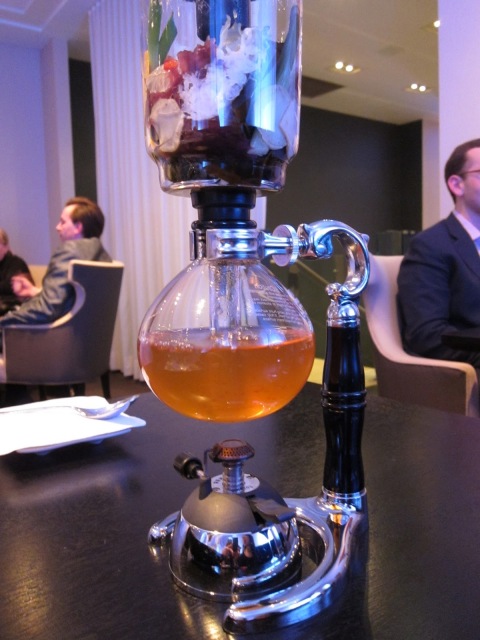 The dashi is not just for show.  It’s an integral part of this next amazing dish.  They take soymilk, grapeseed oil, and scallops and make it into an emulsion that solidifies and gets cubed, fried, and served to mimic one of my favorite dishes, agedashi tofu.  It was soooo weird, because it almost was like tofu but much too delicious and flavorful to really be that bland tasteless protein.  Combined with that amazing dashi, man this one knocked it out of the park for me.  I was just in pure awe at how creative the dish was. 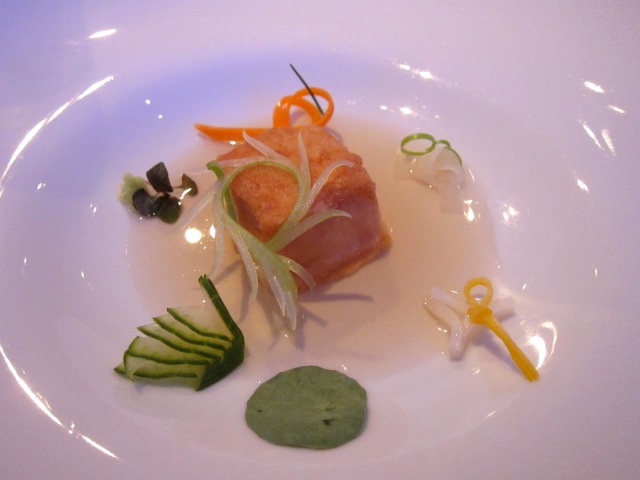 I’m not sure why this was called a woolly pig, but it was a small delectable bite.  The orange flavor was pretty prominent. 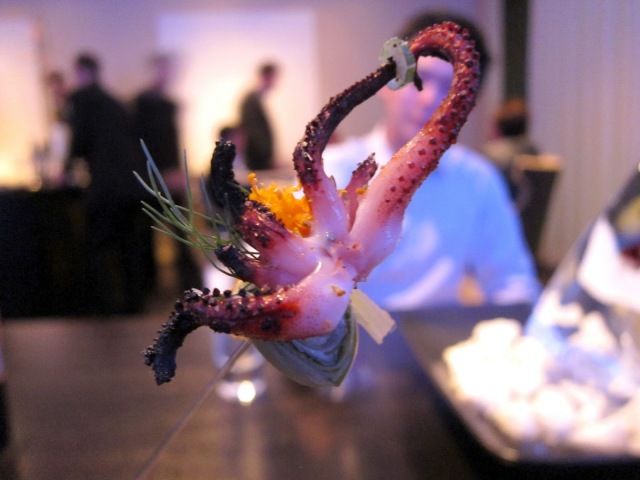 So this was actually the centerpiece when we were first seated.  You just knew it was going to be more than that after seeing how this place operates.

We were served boba size straws and instructed to drink the chilled juice within our ice cube centerpieces. So I guess this course was sort of a palate cleanser because the juice was kind of bland.  It was only just a little sweet. 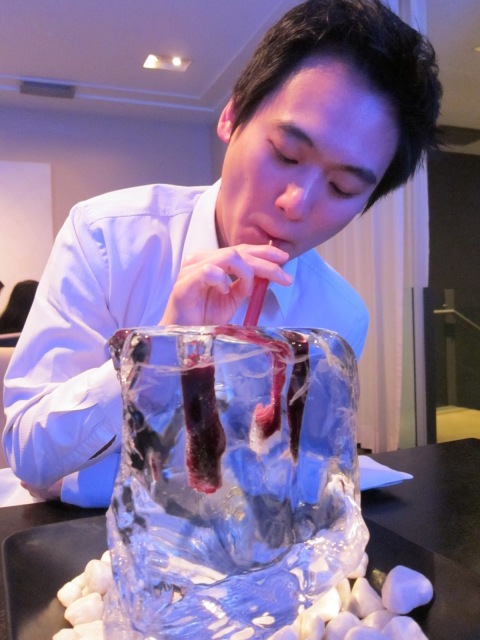 Our next course was probably the course that did us all in.  While every other course was at most a few bites, this was a whole fish!  Dorade royale is apparently a Greek fish, white, meaty, and very moist.  It was filleted, deboned, sandwiched back together, sous vide, and finished on the grill.  While a table of 2 is served just 1 fish, our party of 3 was served 2 fish!  It was such a simple preparation, but oh so tasty.  I kept having to stop myself from eating more and more.  I was practically eating the 2nd fish by myself! 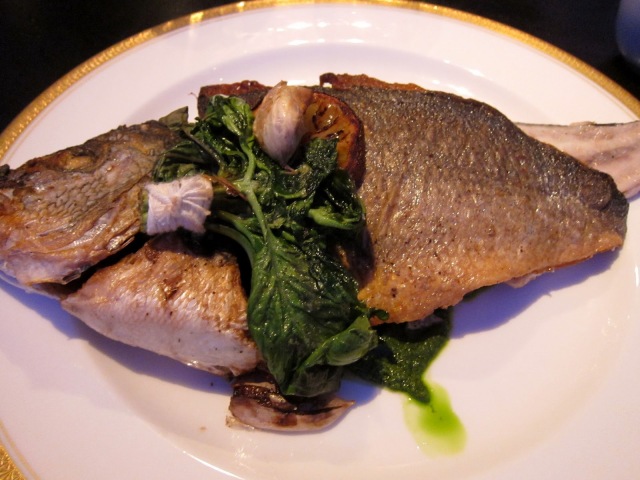 It was served with some chickpea crackers sprinkled lightly with sea salt.  Rich, sorta oily.

The caponata really brought some brightness and freshness.  It was made of fried eggplants, pine nuts, golden raisins tomatoes, and cocoa powder of all things.  I can’t say I tasted much of the cocoa powder. I couldn’t get enough of this since I love anything tomato-ey.  Overall, this was probably the most “normal” course for the night. 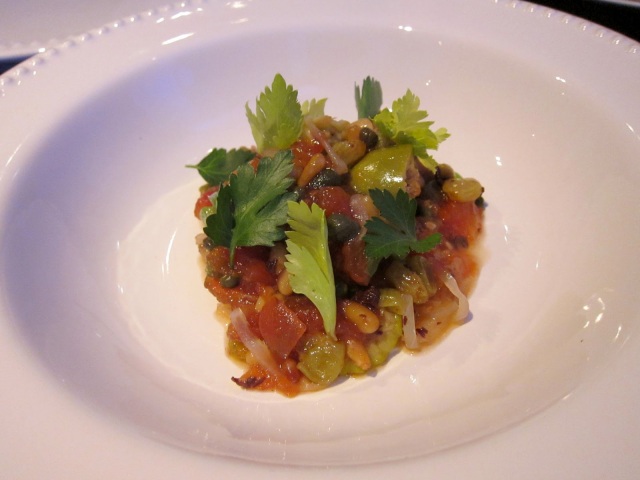 Our next course was described as “time and temperature sensitive.”  It was a hot potato ball filled with cold potato soup.  It was a truffly buttery bite.  Yum!  Ho Bag kept saying “oh that’s good…this is good…”

The next course was served on top of a pillow!  Yes folks, after the meal they allow you to take a quick nap.  Haha, jk.  The pillow was filled with the scent of pine.  As the dish weighs down on the pillow, the aroma of pine wafts around to conjure the scents of a forest for this earthy mushroom centric dish.  Hen of the woods, beech, black truffle, wild red leaf lettuce, and a red wine reduction certainly made for a woodsy dish.  I actually found the pine scent sort of distracting, but a neat trick nonetheless.

The next course had many components to it, none of which seemed to have any rhyme or reason until put in your mouth.  First there was some complicated contraption upon which this piece of red cabbage was placed.  The cabbage was marinated in red wine and cinnamon.  Imagine taking cabbage and making it into a fruit roll up with a tad too much cinnamon.  I guess that doesn’t sound appealing, but the cabbage was more of a vehicle for everything else to follow. 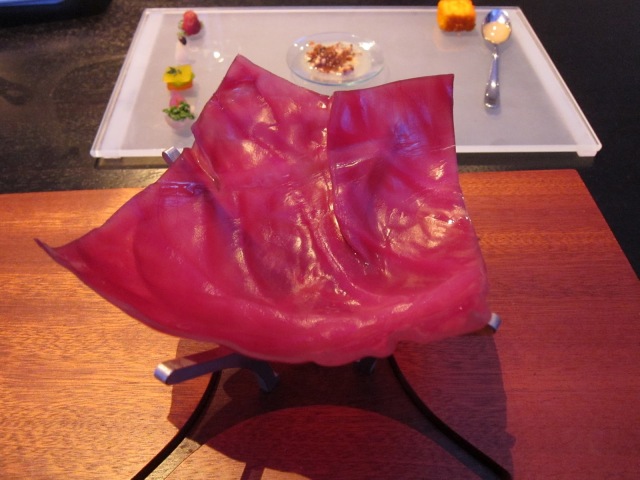 I didn’t really taste any of these accoutrements individually, rather they were all just placed into the cabbage like toppings on a taco.  The beer was gross though. 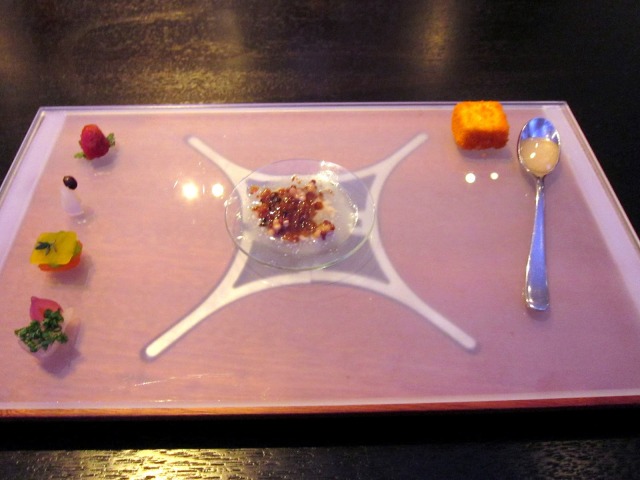 The star of this course was the venison loin.  It was prepared in a red wine huckleberry reduction.  As instructed, we put it and all the accoutrements in the cabbage and rolled it up like a burrito/taco.  It was a drippy hot mess eating this thing, but everything together worked well.  I can’t tell you how, but it did.

This was a bite of truffle heaven.  Once placed in your mouth, an explosion of the most intense truffle flavor errupted.   This was probably another favorite course of the night along with the “agedashi tofu.” 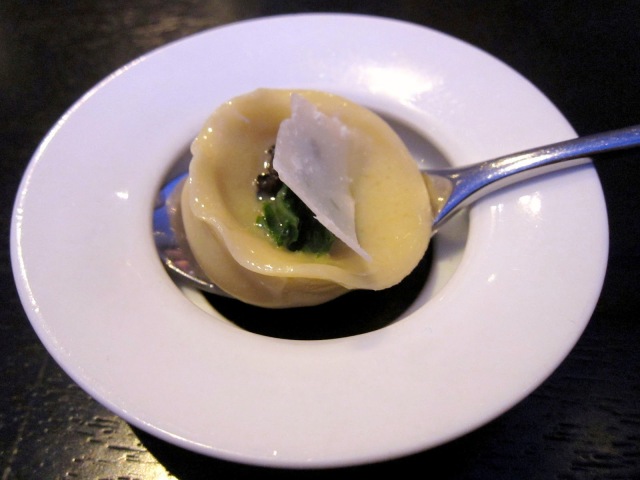 I don’t know who Miro is, but I guess he likes random bites of this, that, and the most amazing piece of squab you will ever eat.  There were no rules to eating this, so we just grazed from one spoonful to the next.  Nothing was as memorable as that squab.  I am now a big fan of squab.

The burning cinnamon stick served as both the main aromatic and utensil.  It carried a tempura fried brie cheese seasoned with brown sugar, caramelized onions, and pears.  It was slightly sweet and savory at once.  More of a neat trick than a delicious bite. 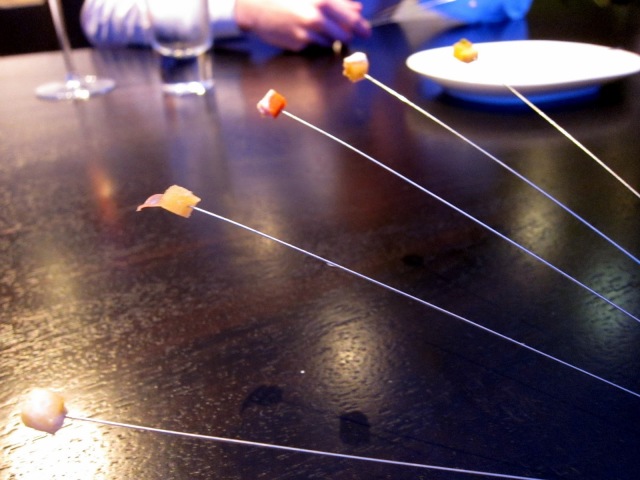 Our meal was still part of the Winter season menu I guess, so this dessert was intended to mimic a scenic wintery forest.  There was the peppermint snow, tart cherry pudding, wild flower honey gelee, gingerbread marshmellow, slices of blood orange, and a cup of distilled hot chocolate.  I didn’t care for much of the components here either.  The snow was pretty minty and too sweet.  The distilled hot chocolate was the most interesting thing because it was as clear as water, but as chocolatey as hot cocoa.  That was the coolest trick ever! 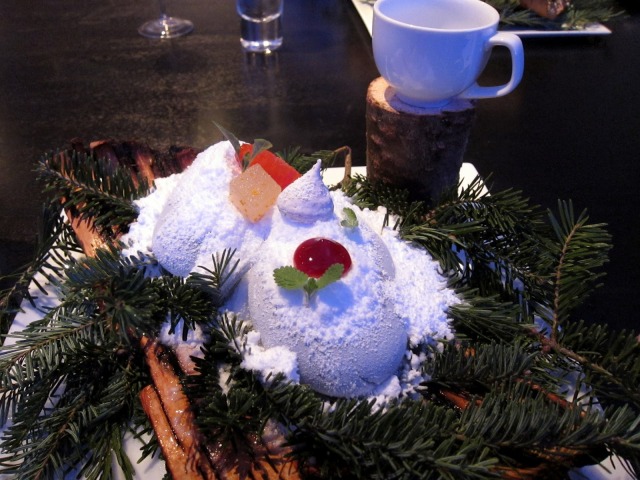 Ok, I lied, this was the coolest trick ever!  Or maybe just the funnest.   Green apple taffy balloons were filled with helium.  You had to act quickly to inhale the helium, squeek out a few funny words in your new voice, and munch on the sticky taffy plastered on your face and hands.

Behold the ridiculousness of our helium voices!

The finale dessert was both dessert and a show.  Below are the sauces for the dessert.  Everything was as expected, but the stout was beer like obviously so I didn’t like it that much.

After painting your table in the sauces and sprinkling the flower petals in a decorative fashion, 2 chocolate spheres that were filled with a whole host of sweet delights including cheesecake like bites, toffee, fruit leather, cotton candy, meringue or macaron like things, and bits of dense cake, were smashed on your table right before your eyes.

It looks like a hot mess but it was actually pretty nummy, and that’s no typo.  We found ourselves at first curious, then intrigued, then delighted, and finally quite satisfied with the Jackson Pollack-esque edible creation.

So after 19 courses and approximately 3 hours food-to-mouth, food-to-mouth action, I would say we were quite stuffed and certainly ASS tired.  All the wine and food ending at the midnight hour was more than our granny pants could handle, even for the wild child Ho Bag.  The whole experience was certainly the most special and memorable meal of my short life to date.  The food was not only creative and whimsical, it was also impressively delicious.  Sure, there were some less than successful courses (the ginger, the iced beet juice, the oyster leaf), but there were also some crazy delicious ones too (the fish, the black truffle raviolo, the agedashi tofu scallop with dashi, and the squab).  If you can afford the HEFTY price tag, I would highly recommend Alinea.  It’s an amazing experience for those who truly appreciate the art of edible creations.

And that concludes my Chicago gastro-tour!  Until next time!