Knowing this trip to Chicago would have a heavy focus on eating, I wanted to make sure we didn’t feel overwhelmed and weighed down by food.  I didn’t want eating to turn into a burden.  So I tried hard to find “lighter” more casual fare for our lunches.  Crisp offered a variety of rice bowls, burritos, sandwiches, and DAMN DELICIOUS wings.  We really should have skipped the rest and stuck to the wings, but I’m not usually one who can eat just a bunch of wings, that is until I had the ones at Crisp!

I don’t know what sort of mutant chickens Crisp gets their wings from, but these guys were huge!  I guess I was expecting something along the size of buffalo wings.  These had the perfect balance of sugar and soy sauce with kicked up flavors from garlic, onions, and whatever other aromatics used.  They were crispy and just a little spicy.  My mouth is watering just remembering them.

Although there wasn’t anything wrong with the bibimbap here, it just was totally not as special as the wings.  It was nice to have something to wash out the massive flavor from the wings with some spoonfuls of rice, meat, veggies, tinged with just a little gochujang.  Honestly though, it’s not a very memorable dish. 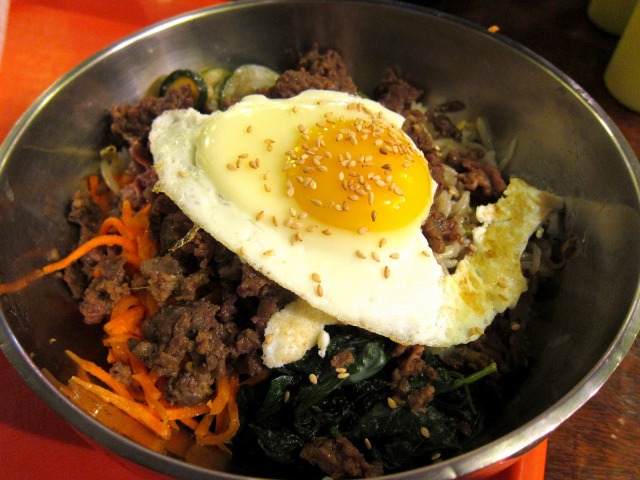 We shoulda just stuck to either the bowl or the burrito because both was just way too much food.  The burrito was just like bibimbap wrapped in a tortilla, substituting out all the veggies for a different set of veggies.  Not bad, but not great.

If you come to Crisp, just stick to the wings…lots and lotsa wings!   It’s too bad I’ve never had the wings at BonChon or Kyochon, which are pretty famous Korean wing joints because I’d like to see how Crisp matches up.  I would bet Crisp would kick ass, but that’s just my bias.  I’ve never been much of a wing person, but for Crisp I guess I’ll have to change my ways.  I still refuse to eat wings with my hands though.  Pass the fork and knife please!!