I don’t know what inspired me to suddenly try this recipe.  I’d been in a chocolate chip cookie mode, but I just got the inspiration to finally see what all the hype was behind the “donut muffin.”  I guess it’s muffin that tastes like a cake donut.  How is that possible?!?!

It seems like a pretty basic cake/muffin recipe with all your basics: flour, leavening agents, sugar, eggs, milk, etc.

I’m wondering if I should invest in a nice stand mixer, but my handy dandy hand mixer, which I’ve had since college and is probably the only kitchen item I’ve kept since that period of time, has yet to fail me.  That’s gotta count for something.  Maybe I’ll put it on the registry and hope someone gets it for me?  I mean, Dumpling Man and me… 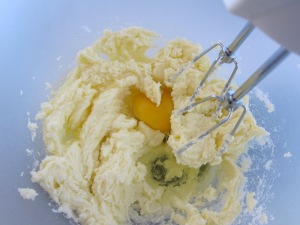 The recipe calls to alternate mixing the dry ingredients and milk to the creamed butter/egg mixture.

My dough seemed a little lumpier and drier than I would have expected.  Not sure why.  Sometimes, I think the size of the egg makes a difference, but “large” is “large” right?

As a result of my lumpy dough, the tops were sorta uneven, but it still tasted quit moist and picked up the cinnamon sugar topping quit nicely. 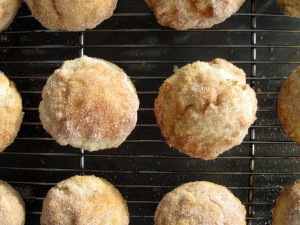 3. Sift the flour, baking powder, baking soda, ground nutmeg and salt together and mix well together. Set aside.

4. Combine the milk and buttermilk. Set aside.

5. Cream the butter and sugar in a electric mixer with medium speed.

6. Lower the mixer speed, add one egg at a time, beat until just mixed in.

7. Use a wooden spoon, stir in a quarter of the dry ingredients into the butter mixture. Then add in a third of the milk mixture and mix well. Continue mixing in the remaining dry and wet ingredients alternately, ending with the dry. Mix until well combined and smooth, but don’t overmix.

8. Divide the batter into all the muffin tins.

9. Bake in the preheated oven for 30 to 35 minutes or until a cake tester come out clean.

10. To make cinnamon sugar: Combine the sugar and ground cinnamon and mix well.

12. Dip the muffins into the melted butter and then roll them in the cinnamon sugar.

I think it turned out quit well.  Dumpling Man thought it was more like a muffin biscuit.  Right out of the oven it has a more flakey texture that is reminiscent of a biscuit.  I think the nutmeg is what reminds me of a cake donut.  Either way, I think this is a winner.  I may try to make the original recipe since some of the measurements are sorta off when it was halved.  It’s good to have this for breakfast or dessert.  The cinnamon sugar topping may be a lot of sugar in the morning so you may try just dipping the tops in butter and cinnamon sugar topping.  It really is quite tasty even without the topping.