Skip to content
Liberty Kitchen & Oyster Bar
1050 Studewood St
Houston, TX 77008
libertykitchenoysterbar.com
Yelp
It’s amazing how looks can be deceiving.  Food can be made to look and play the part of the delicious and delectable star of the show, but can turn out to be a disappointing and uninspired performance.  The analogy might apply to Liberty Kitchen.  The Yelp pictures dazzled me.  The mounds of mac and cheese and the heaping bowls of gumbo drew me in.  Alas, only the oysters stood out.
Crazy Roasted Gulf Oysters
I am always a little hesitant to order cooked oysters.  I figure that only the least fresh and least desirable oysters are left to be cooked, while the best are eaten fresh and raw.

garlic, lemon butter
To my surprise, these were actually really tasty.  The herbs and lemon added the brightness you normally expect when indulging in these oceanic delights. 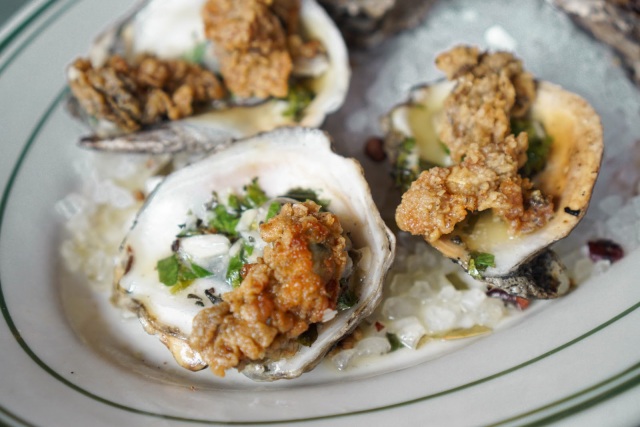 The Annoyer (formerly known as BHD) liked the savory sweetness from the bacon jam in this one.  It was too sweet for my liking.  Both had nicely cooked oysters that weren’t lost in the crunchy batter.

I was really looking forward to the deep flavors of this gumbo but it fell flat.  It was salt but not much else.  It was full of seafood and sausage which was nice, but I needed more.

This looked crazy delicious right?  Not so much.  Also another flat dish.  It was cheesy but just lacking that special Yums factor.  Even the shrimp, bacon, sausage failed to elevate this dish to winner status.  I found it really surprising.

Maybe my expectations were too high for Liberty Kitchen, but you can’t deny that the sight of the food makes you want to jump into stick a fork right into the computer screen.  Despite my less than enthusiastic review, I would go back and try it again but I’m in no rush.  Their brunch menu looks particularly interesting.
10 – You NEED to eat here
9 – Awesome!
8 – Very good
7 – Good
6 – OK
5 – Average
4 – Not bad
3 – Not good
2 – Terrible
1 – Do NOT eat here