I’ve only ever been to Houston once in my life.  It was for a funeral.  Kinda morbid I know, but you can imagine that I didn’t do much recreational eating during my short trip there 4 years ago.  I was visiting Bair Hugger, who calls Houston his home, ever so begrudgingly.  Bair Hugger is aware of my passion for eating and food blogging.  He too shares a similar passion, though he believes iPhone pictures posted on Facebook is passable food porn.  Unfortunately, we do not share the same love for Zydeco Kitchen.  I have a pretty high bar when it comes to Southern food because it’s just not one of my favorites being so heavy and unhealthy.

The setup at Zydeco is pretty casual.  It’s cafeteria style.  You grab a tray, you point to what you want and you’re meal is handed to you.  Some dishes do require ordering and waiting for a number call.

Crawfish Etouffee stewed okra & tomatoes, corn maque choux, cornbread
So I guess the closest thing to Southern food I’ve had lately has been the panroast, gumbos, jambalayas at Ritters.  Maybe it’s blasphemy that I even put Ritter’s in the same category as Zydeco.  What do I know?  I am no Southern food expert.  I liked that the crawfish was plentiful here.  I wasn’t very impressed with the depth of flavor.  Even the side dishes of okra, corn, and cornbread were slightly lacking in salt and sugar.  So overall, I was kinda meh about this set. 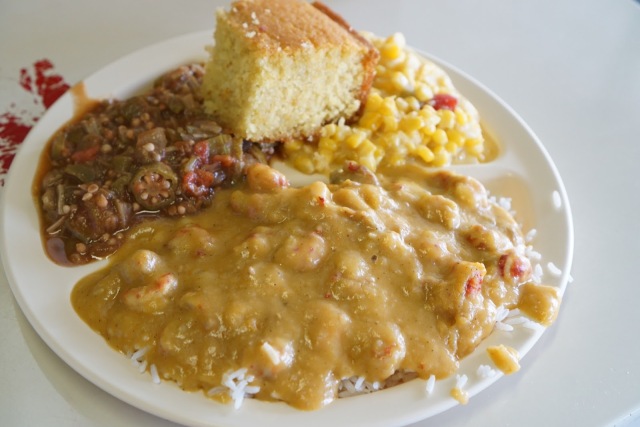 I enjoyed this dish much more.  The oysters were plump and juicy.  The cornmeal based batter wasn’t too heavy or overwhelming.  The shrimps were also similarly moist and lightly battered.  I enjoyed dipping them in the standard ketchup, cocktail sauce, and tartar sauce trio.  The jambalaya was a different style than I’ve had before.  It was drier and didn’t pack that big of a punch.  The fries were really nothing special.

Bair Hugger raved about the chocolate cake here.  I will admit that the cake was VERY moist.  I wish I knew the secret to a very moist cake.  I like deeply chocolately cakes though and this wasn’t dark and rich enough.  For a cafeteria cake, it was pretty good though.

Zydeco was underwhelming.  It didn’t bring the flavor and spice I expected.  There were some highlights, but the meal was nothing to write home about.  I guess if you like supermoist cake and don’t need it to be super chocolately, then maybe you can come for that.  I think there is probably better Cajun/Creole food to be had in Houston.  When I find it, I’ll let you know.