Grace came highly recommended by Buff Bear, who has been living in Chicago for the past 2 years.  He said it was better than Alinea.  Dems strong words there Buff Bear!  So of course I had to try the place out, on my now third visit to Chicago.  Triple F never heard of the place, I guess because it hasn’t been open for even a year!  It definitely falls under the category of fine dining, with a tasting menu costing $185.  Yes, I know, really steep, buuuut you only live once right??  After the wine pairing, tax, tip, oh god, it was a killer to the wallet to say the least.  Buuut, it was good.  Modern, innovative, tasty.  Better than Alinea?  I guess we’ll see…

The plating here is so beautiful, I almost didn’t want to eat this but it was a delicious, more elevated version of steamed crab legs dipper in butter.  The buttery sphere burst in your mouth with an intense butteriness.  It was a tad too salty overall but still good.

Black pepper melon juice, caviar, mint
This was another ball that exploded in your mouth.  This may be the first time where I didn’t find the caviar too salty.

Plum sodaTriple F didn’t seem to like this refreshing palate cleanser as much as I did.  It wasn’t that sweet, it was more tart and watery.  I like the little seed pulps swimming in my mouth.

Now we start the FIRST course.  Yes those were all just little gifts from the chef.  The chef here definitely brings together ingredients I’ve never had together and it really works.  The frozen slush on top was like a frozen mignonette. 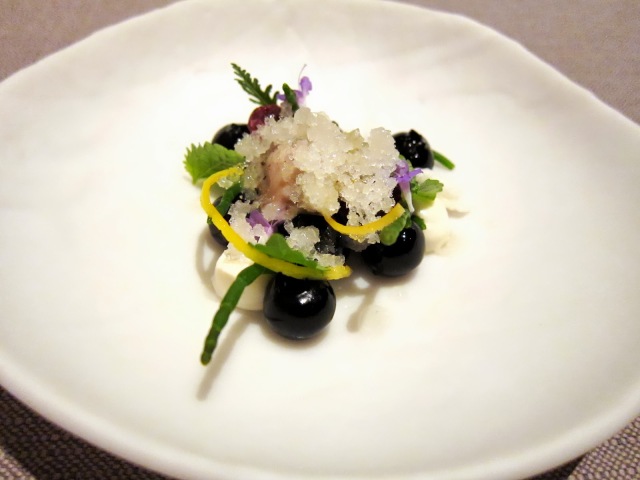 I loved this dish because of I love tomatoes.  There were so many different preparations.  The big circular thing was some sort of frozen tart broth?  I guess this must have been some deconstructed and reinvented version of a caprese salad??  Me likes!

I actually liked the plain butter the best.  Sooo creamy!

Buttered Brioche
It was light and buttery green because it was made from the same herb butter.

Pretzel Loaf black lava sea salt
This was my favorite bread of the evening.  It seems so simple being just pretzel bread but it was goooood.

The crispy squab skin on top provided nice contrast to the juicy perfectly cooked medium rare squab breast.  On the right is a squab leg which was also delicious.  I appreciated the brightness from the kaffir lime leaves and strawberry.  It was hard to appreciate the truffles since they don’t have much flavor on their own.

This was probably my least favorite dish of the evening.  Triple F and I just didn’t get all that was going on here AND we don’t like artichokes that much.  The artichoke was prepared in 3 different ways: crispy, pickled, roasted and paired with a smoked banana custard.  You can’t see it, but there are black tapioca balls macerated in a artichoke liqueur, which was the waiters favorite component to this dizzying plate.  I didn’t think the fancy boba was all that.

This was a supplement for an added $75 per person (ouch!). The risotta was cooked perfectly.  The red win reduction was sweet and tart while the chive oil was subtle and herby.  After being served, a massive amount of truffles were shaved at tableside on top of the risotto.  I think I’ve come to learn that truffles only impart that crazy umami flavor when they are cooked or prepared in some fashion.  Shaved raw, they really don’t taste like anything.  As the truffles came in contact with the hot risotto, they really started to give off their strong scent.  On the whole, I have had tastier and less expensive risotto.

Wagyu beef was so unctuous and deliciously fatty. The chanterelle mushrooms came in two preparations: pickled and grilled.  The bright red cube is sweet watermelon which made for a very summery dish.  I’m not really sure how everything was supposed to come together though. 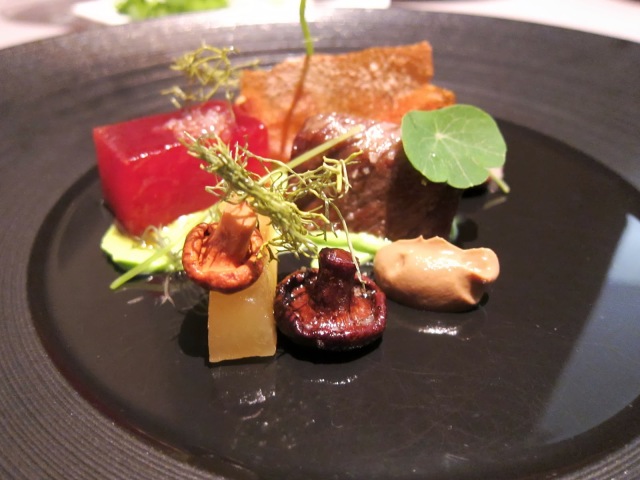 Triple F and I shared 1 wine pairing, which was probably the BEST wine pairing I’ve ever had.  Each wine was really great in its own right, but tasted even better with the food.  I think this was the 2011 Domaine de la Rochelierre “Cuvee Priviledge” which was aerated in this super fancy decanter.  Was it for show?  The sommelier said this long spout allows the wine to get into more contact with air.  Annnnyways, it was wonderful!

Now came the time of the meal when I was ready to bust.  Triple F doesn’t like the gaminess of lamb much, so generally doesn’t like lamb dishes too often.  She liked this one because the lamb flavor was more subdued.  It was served with sauteed Tuscan kale, mint puree and two preparations of parsley root: crispy and raw.  The raw root was just too raw!  This was another solid course.

On to desserts!  Different types of raspberries were on display here.  The sorbet was made from kokum which is a tart fruit from Southern India.  Everything paired well here.  The wine was really kicking in by this point and it’s really hard to remember what everything tasted like!

The dome was a frozen peach puree.  It had an interesting light airy texture that melted in your mouth.  I was beating on it like a drum.  That part was fun!  There were little cubes of brown butter fennel financiers which were pretty buttery and tasty.  This was my favorite dessert.

All sorts of coconut stuff going on here.  I’m not a huge coconut fan but I could appreciate the flavors.

No recollection of these whatsoever, but aren’t they so peeerty?

The kitchen was so quiet, clean, orderly, it felt like a research lab!

Grace presented some really beautiful and delicious food.  Sometimes harmonious flavors and ingredient combinations get lost in modernity and innovation.  I’m glad to say that did not happen at Grace.  There was definitely a wow factor for the presentation and techniques used here, but taste wise, Alinea wins.  There were some misses, like that artichoke dish and coconut dessert.  Alinea just evokes a lot of whimsy and cleverness, which adds to its uniqueness.  Therefore, Alinea wins.  Maybe it’s not even fair to compare the two restaurants, but Buff Bear sorta set it up for that.  Go to Alinea and Next before coming here if you’re visiting Chicago.  Grace still gets my recommendation but maybe save it for a special occasion, if you’re rolling in dough, or you’re just crazy about food.  Ugh, that price tag still hurts…