You know that saying, “It’s all about who you know”?  It’s not just a statement for the job seekers, business whores, and budding actors/musicians/artists of this world.  For the last few years, I have been to some nice restaurants for FREE because I roll with King Arthur and his entourage.  It’s a difficult status to attain, but I have managed to maintain a firm position within this “inner circle” of eaters and intellects (my euphemisms for gluttons and nerds).  Being an outsider, I feel that one has to prove one’s worth to join The King’s possy.  Of course, you better like to eat, and you better be damn amusing.  The King does not employ any jesters in his court for this very reason!

This was probably my last gratis dinner with The King and his crew, Teety, Soprano Man, and Chops (previously known as Ms. Chatty Cathy).  The Pouter had more important people to dine with that evening (who could be more important than The King?), and The Attending, let’s just say we’ve gone our separate ways.  One for good and the other for evil.  Haha…jk?

Compliments of the chef, this was the first of 2 amuse bouche to kick start the evening.  We were all sooo hungry by this point.  Shrimp and crispy!

These were sorta like seafood empanadas.  I didn’t think they were as tasty as the shrimp toasts.

The chow fun part was nice, but I’ve had more unctuous preparations.  Did I know it was kobe beef cheeks inside?  I mean, not really.  Tasted like tender beef.  The accoutrement of herbs made for a nice bright bite with a touch of heat.  When I get these versions at dim sum, I always prefer the ones with big shimps in them.

A good soup, but not much of a hot &amp; sour.  The addition for the corn made for a more sweet than a sour soup, which although was not was I was expecting, but was still flavorful.  It did start tasting a little “one note” after a while.  The prawn wontons were DELICIOUS.  You can’t do wrong by me with big hunks of shrimp.  They were so fresh and plump, yummy!  Aside from the wontons, I probably would not get this again.

I didn’t get to try these lettuce cups, but Soprano Man sure seemed to enjoy them.

These were mistakenly brought as my appetizer.  The waiter let us keep it on the house.  Usually I don’t get too excited about the actual Chinese version of this since I find it so dry and the skin is usually not that crispy by the time I get to it.  Whoa-ee! these were 100x better than any version I’ve had that was made by an actual Chinese person.  The meat was succulent, dripping with juices and fat.  The skin was impressively crispy.  It had a great “fat crunch” if you know what I mean.  At this point I was pretty stuffed, but being the loyal subject that I was, I kept chugging along and eating.

I especially liked the chive crystal dumpling and would certainly order it again.  There was so much shrimp in there!  All the other proteins played harmoniously together for one tasty bite.

These weren’t as impressive simply because it was chicken, which just isn’t as exciting as seafood, but it had a little more heat and sweetness from the chili garlic sauce.

I’m not quite sure what was “tiny” about these guys, but I appreciated the crispy skin on the one side.  These were probably not as hefty as the crystal dumplings, but I liked them better than the dan dan dumplings because pork belly &gt; &gt;&gt; chicken.

Just another close up of the crispy suckling pork.  Look at all those bubbles on the pork skin! 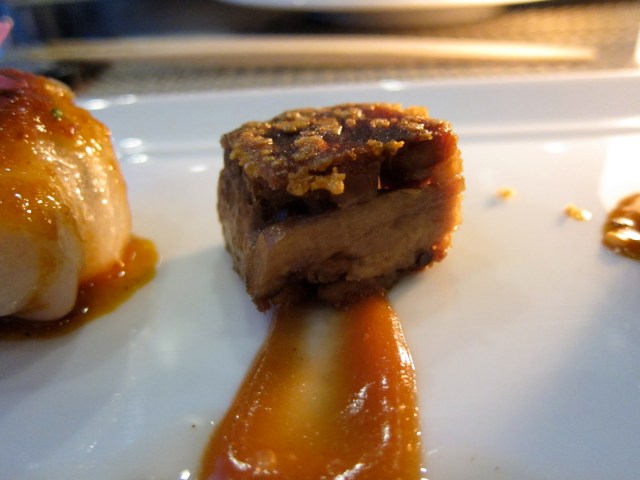 I think I’m going through a bad ordering streak.  I just saw prawns and went to town, but these were disappointing.  I’m not really sure what dish it was trying to emulate, but it was just a whole lot of slathered sweet ooeey gooey-ness.  The prawns were huge and there were 4 of them, but the sauce was just too overwhelming.  The dish was also served with some funny donut/twinkie looking things in the middle.  I’m not quite sure how they fit in.

Wherever I go, I have to have these.  I love this style of preparation of eggplant, and it was pretty darn good here.  Not too oily, a good amount of wok hei with a good balance between salty and sweet.  It’s a good thing we got 2 orders for our party of 9.

Chops and Teety didn’t think this was all that special, but Soprano Man and I were loving the salty expensive flavor of the XO fried rice.  The side portions were just so darn small and so I wished we got 2 of these too.  Alas, it was one order of fried rice, and one of noodles (not shown).

Soprano Man and Teety both enjoyed their fish.  Being cod, it was very moist of course from all the natural fat.  I’m not sure if I tasted the “ginseng honey” since I thought it was just a miso black cod like they have at many Asiany fusiony restaurants.  I didn’t get to try the noodle salad, but I got deliciousness vibes.

Seriously, by dessert I was busting at the seams.  These days, no matter how full I am, I always have to end on something sweet.  The meal just doesn’t seem complete without it.  None of the desserts really got my excited so I went with the fritters hoping for something donut-esque. The fritter part was pretty standard, but the sweet corn kernels hidden inside were unexpected and quite interesting.  The pandan ice cream put the Asian spin on the whole thing.

Teety got this one.  He’s pretty useless since he can’t really remember what the dish was called and I didn’t taste much of it.  He seemed to enjoy it. 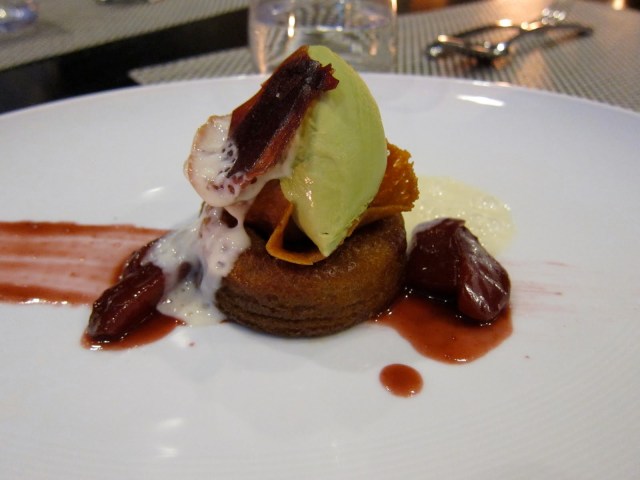 I’m not a big fan of almond flavored things and these were pretty almondy.

Our waiter described the intention of WP24, to stay as close to the original Chinese influences using the highest quality ingredients.   I would agree that the food was “pretty Chinese” and the food was elevated to a level, higher than anything you could find in the SGV.  The presentation was lovely and everything tasted so fresh.  I imagine though, that Chinese “fine dining” would not taste like this.  Although WP24 is fancy and expensive, I would not call it refined.  There is a certain subtly that goes into really refined fine dining.  Sometimes the taste of certain dishes were a bit too heavy or sweet, which is sort of a pet peeve for me when it comes to Americanized Chinese food.   The eggplant and fried rice dishes and maybe the crispy pork tasted the most unadulterated to me.

Despite all this, I still enjoyed myself and you could definitely here some “Mmmm’s” and “This is good/tasty” coming from my direction.  It’s just a little hard to give a wholehearted 2 thumbs up because it was quite expensive and I can just imagine high quality expensive Chinese food tasting better if done by Chinese people, but it may not have as wide appeal.  For the ambience, the pretty view (only at night really), and for some fancy “Chinese” flavors and concepts, WP24 is your place.  The place is certainly worth a try if you got the $$$ to spend.

**To His Royal Highness, King Arthur, High Commander of The Infectious Disease armies, may you continue to fight valiantly against the communicable and virulent, and may the bounty from your conquests continue to feed your loyal subjects.  I would be so lucky to find a king, such as yourself, in the land of the Pacific Northwest, my new home.**