Skip to content
What’s a trip to Miami without taking in the Cuban culture of this heterogeneously Latin city?  We went for a quick brunch at a chain of Cuban restaurants called Havana 1957.  Bruin Bear took an earlier flight out, but she was raving about the flan here, which unfortunately they were not serving, it being 10am and all.  We were starving after our 15 minute walk to the restaurant.  It seemed like forever.
Bread Basket
We completely devoured this.  I’m not quite sure what’s so special about Cuban bread.  It’s just kinda flat and semi-dense.

Care Bear and I went halfsies on the sandwiches.  Despite this looking so blah, it was actually pretty tasty.  The pork was moist and the onions were sweet.

Cubano ham, cheese, roasted pork, pickles, mustard
I’m hoping the classic Cuban sandwich gets better than this version.  It was just a lot of ham, mustard, and pickles.  I couldn’t understand the hype.  I’m sure if we went to a Cuban sandwich specific place I would have been more impressed but the pork sandwich won this battle for sure. 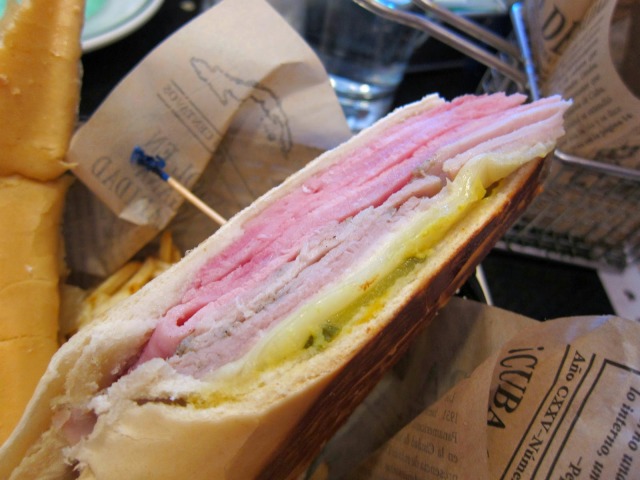 Havana 1957 was just OK.  Maybe dinner would be tastier.  Maybe if I had the flan, my world would be rocked.  It was a cute place with the whole Cuban theme going on and nice outdoor seating for good people watching.  I think there are probably more exciting Cuban places in Miami though.