Houston’s best upscale Japanese fusion/sushi restaurant is without a doubt Uchi.  Uchi is probably more successful with its Japanese fusion dishes than its classic sushi.  Now there is MF Sushi here to fill that void.  The restaurant is strikingly modern, elegant, and unarguably beautiful.  The sushi bar is at the center of it all, where we had prime seats for the evening’s first seating of Chef Kinjiro’s 22 course omakase.

This is not Chef Kinjiro, but rather some of his minion sushi chefs, diligently making sushi for the rest of the restaurant.

Fresh Grated Wasabi
They start you out with fresh wasabi, grated right in front of you.

Mozuku Salad okinawa seaweed, quail egg, nori, vinegar
The first course is an interesting salad of slimy seaweed.  I’m not sure this is something most Americans would appreciate because I’m pretty sure it’s not a texture most people grow up with.  It reminded me of the time my white high school friend tried boba for the first time.  It dribbled out of his mouth as fast it was sucked up.  If you can get over the cool slime, it’s tart and tasty.  It did become a little one note after a while, being quite vinegared. 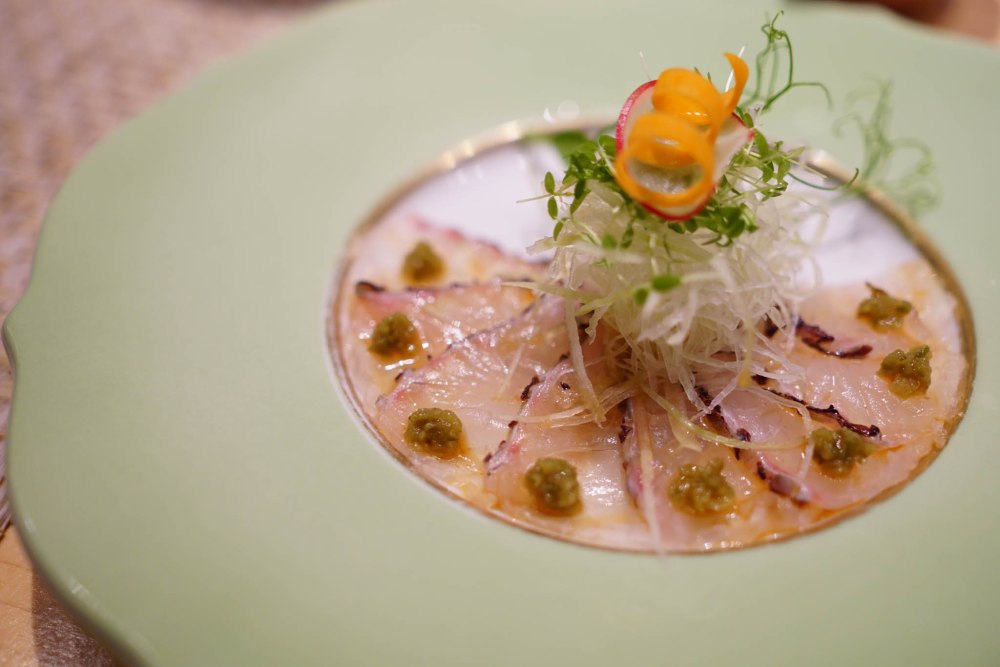 This is Chef Kinjiro, who is the most animated sushi chef I have ever had the pleasure of sitting in front of.  I know sushi making is an art form to some degree, but he makes it seem like a modern form of dance.  It was quite amusing.  He is obviously not your traditional sushi chef.  I’m pretty sure Jiro would be horrified at his methods.

Kinmedai
Each piece is already seasoned with his secret nikiri sauce.  With golden eye snapper especially, it tasted pretty sweet, maybe too sweet.  But for most other pieces it was the right balance of salt and sweet.  It’s hard to tell, but Chef Kinjiro makes the nigiri pretty small.  He calls it the “perfect” size, just 2 fingers wide.  He has small hands.  I checked.

Akamutsu yuzukosho
I never had Japanese rosy sea bass, but this was clean and well highlighted by the yuzukosho.

Shima Aji shiso oil
The shiso oil was reminiscent of a pesto sauce.  I liked that it was flavorful but did not overpower the delicateness of the skip jack.

Kohada green onion, ginger
Gizzard shad has interesting texture, being more firm than any of the other fishes.  It was also more fishy so not my favorite.

Kanpachi yuzu, lime zest, salt
I generally like amberjack, but I thought all the flavorings were overpowering.  It was too sour and salty.

Steamed Madai dashi broth
I assumed this was how all the odd leftover bits get used.  The fish was a tad overcooked.  I wished for more umaminess in the broth.  It tasted a little one dimensional.

Amiebi yuzu, shiso oil, salt
This was definitely one of my favorite dishes of the night because that fried shrimp head was so meaty and crispy.  The sweet shrimp was lightly marinated in citrus and shiso.  Overall, it was a delicious course.  YUMS!

Saba shiso ponzu, sesame seeds, chopped shiso leaf
I don’t like mackerel and this is probably the best version I’ve had but I still could not get over the fishiness.

Tako live octopus, wasabi vinaigrette, hokkaido seaweed
I’ve never had such tender octopus.  This was not chewy at all and probably resulted from the 45 minute massage it received during prep.  The wasabi vinaigrette was definitely entering into fusion territory.

Hamachi Belly
At this point, I exclaimed “That was the best piece of the night so far!”

King Salmon Belly
Then I exclaimed, “Oh damn, that was pretty good too!”

Bluefin Tuna
The tuna was clean, the texture was perfect.  Sometimes it can be fishy or mushy when it’s not good. 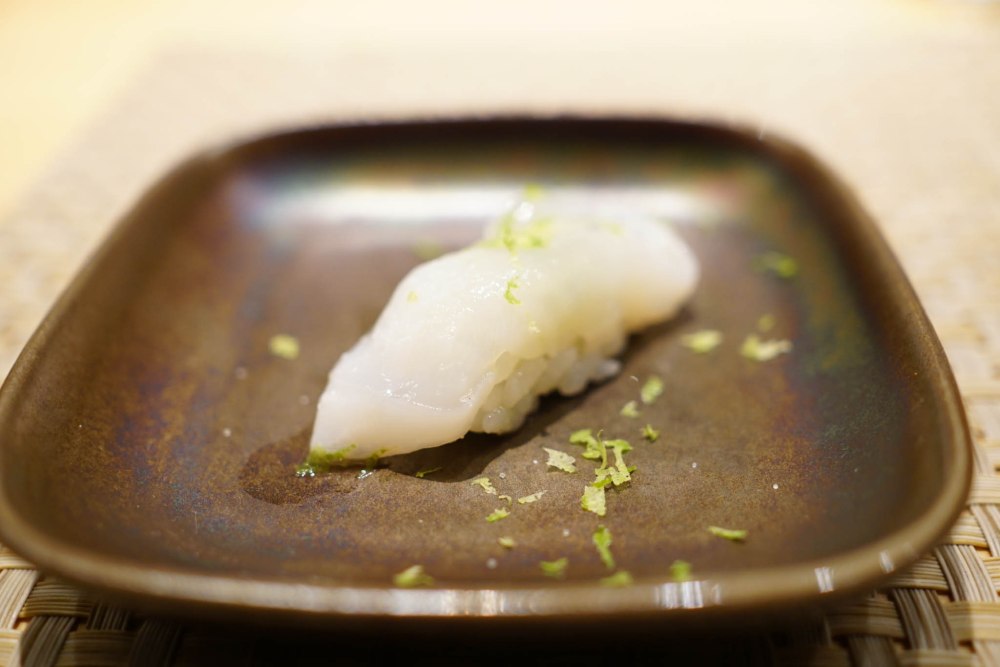 Chutoro
And then I had the chutoro which blew the hamachi belly out of the water.

O-toro
And of course it was only better with the o-toro. 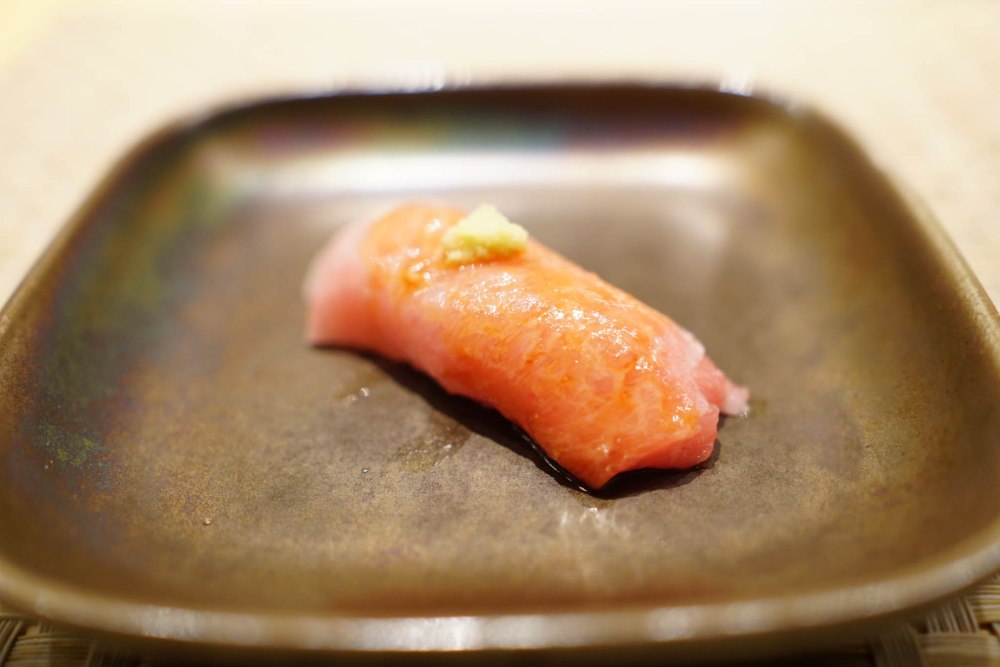 Kama-toro caviar
I never even had kama toro before.  I didn’t know anything got better than o-toro, but this is from the cheek of the tuna and damn was it good.  The caviar seemed over the top but it was actually a very subtle addition.  You probably didn’t even need it. 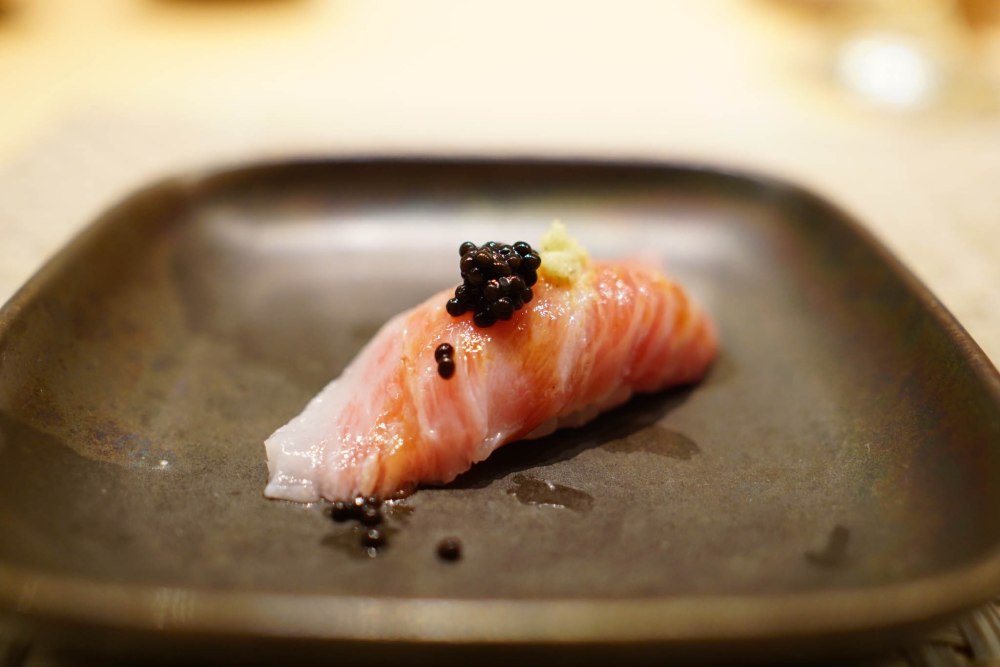 If Chef Kinjo didn’t already seem a bit eccentric with his sushi making dance, then he is surely off his rocker torching wagyu in his bare hands. There’s showmanship and then there’s complete danger!

A5 Wagyu Beef Aburi seared and torched, dijon mustard, truffle butter, truffle soy, shaved black truffle, serrano pepper
It was just as heavenly as you would imagine with all that fat and truffley goodness bathing my tastebuds.  YUMS!! 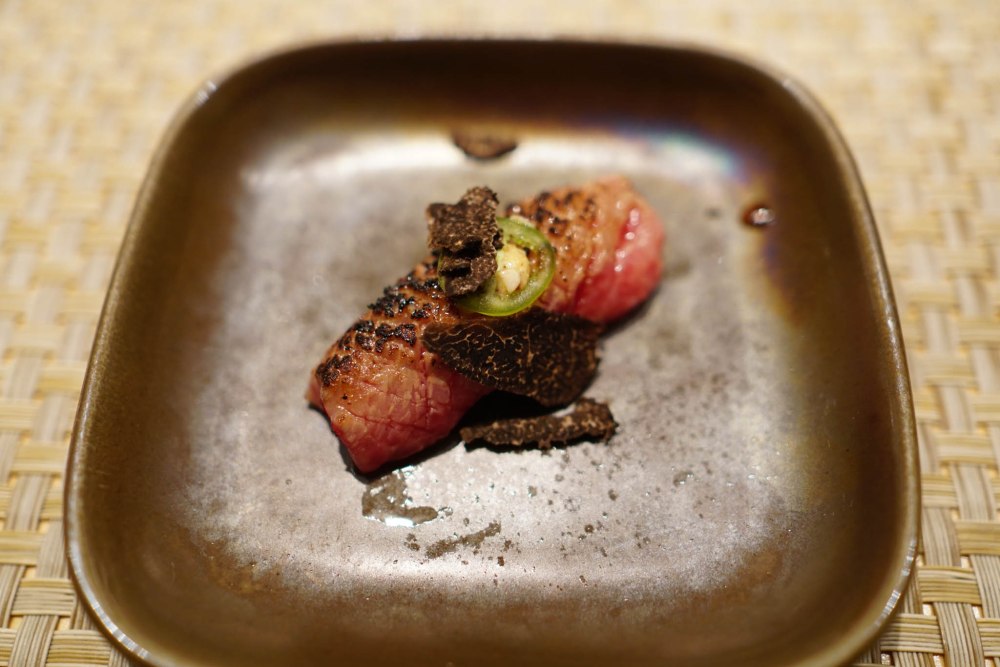 Oyster Shooter prince edward island oyster, quail egg, santa barbara uni, spicy ponzu
The last 2 dishes weren’t as successful.  I LOVE uni and oysters.  This probably would have been more successful if they used a different sauce.  The spice in the “spicy ponzu” came from Sriracha and it was overpowering and all wrong here. 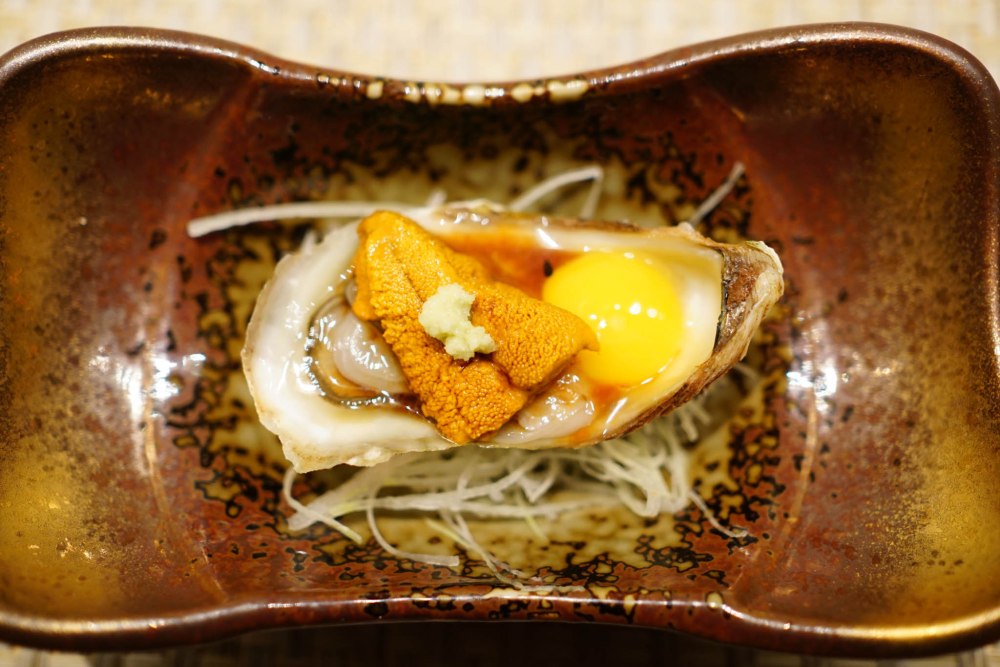 Spicy Tuna Tartar avocado, truffle mousse, caviar, 18k gold flakes
The best part of the dish was that truffle mousse.  YUMS!.  The tartar was not memorable. 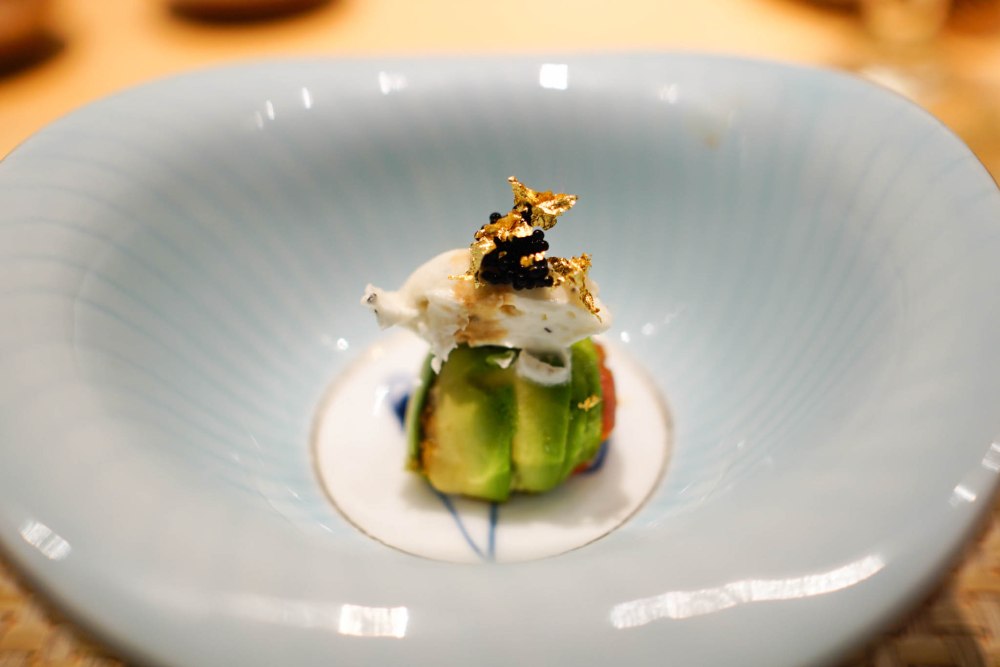 MF Sushi was magical.  I guess it should be no surprise that “MF” actually stands for “magic fingers,” a nickname Chef Kinjo picked up along his 20+ year career.  His sushi is certainly better than Sushi Zo, which now looking back is completely overrated and overpriced.  It was a more classic style than O Ya, which still takes the cake because their fusion courses were incredible and hard to beat.  But for Houston, this is easily the best sushi you will get.  It’s a good amount of food, but you aren’t dying with 22 courses.  Keep in mind the nigiri here is on the smaller side.  It’s perfect for a special occasion dinner, or you could be like the extravagant parents that brought their ~10 and ~14 year old kids to partake in the $$$$ omakase.  Those kids have some great palates to be able to enjoy food as fine as this.
10 – You NEED to eat here (if you live in Houston)
9 – Awesome
8 – Very good
7 – Good
6 – OK
5 – Average
4 – Not bad
3 – Not good
2 – Terrible
1 – Do NOT eat here